How To Blow Your Nose Properly

Your options are to blow or to snort 'n swallow. Unless you prefer to let the snot just sort of dribble out and pool in your philtrum, giving your upper lip a damp, sickly glisten. Which, no — what are you, seven? It's time you learned to get rid of mucus like a well-informed adult. Photo Credit: anna gutermuth via flickr | CC BY 2.0

Before we begin, a clarifying point: The thing about stuffy noses is they're rarely stuffed with snot. If cold, flu or allergies have you feeling congested, chances are your nose is blocked up not with mucus, but with swollen blood vessels. Yes, your body does secrete more mucus than normal when it's sick, but bear in mind that a "normal" nose produces a pretty prodigious volume of snot as it is (between 600 and 700mL a day — enough to fill a Mount Franklin water bottle), which your body typically does away with without incident; a few extra millilitres of gunk shouldn't really flummox your face's drainage system, but things can get messy when your pipes start to swell and restrict the proper flow of things.

The upshot is that the non-Newtonian fluid leaking from your schnoz probably isn't even the biggest issue here, from a breathability standpoint. Forcibly ejecting it from your face, then, probably won't do as much to clear your airways as you'd like. In fact, there's a chance that nose-blowing may actually slow the drainage process. But you don't care about that, do you? Of course not. You've got yourself a box of tissues, dammit, and you're here to learn about best practices for jettisoning boogers. Fine then. Have it your way.

To Blow Or Not To Blow

Let's cut right to the chase. The case against blowing one's nose — by which we mean the good, hard, occasionally foghorn-like blast that one unleashes when one means serious business — is two fold: First, it generates a lot of pressure in one's nasal cavity. Second, that pressure can trigger a kind of otolaryngological blowback, blasting dollops of mucus not out the nose, but backwards and into the sinuses.

In 2009, researchers led by University of Virginia infectious disease expert J. Owen Hendley tested these claims by measuring the intranasal pressure of test subjects as they sneezed, coughed and blew their noses. The researchers also added a special dye to the test subjects' nasal cavities. Called "iodinated contrast medium", the dye allowed the researchers to monitor the flow of mucus by performing CT scans of the patients' sinuses before and after sneezing, coughing and nose-blowing. 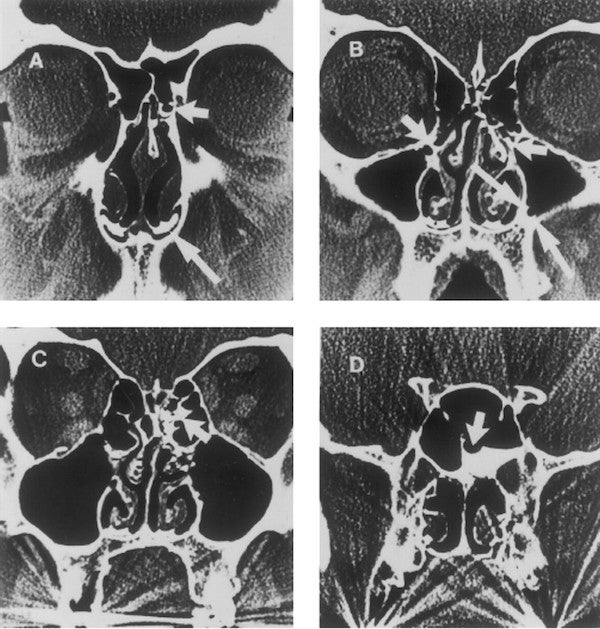 While the researchers did find coughing and sneezing to produce more intranasal pressure than normal breathing, neither generated anywhere near as much pressure as nose-blowing, which, at an average of 66.2 mm Hg, was about what you'd expect from a person's diastolic blood pressure reading. (There's also evidence that this kind of pressure is enough to trigger an haemorrhagic stroke, but let's try to fret over one thing at a time, shall we?) Meanwhile, the pressure generated was enough to launch up to 1mL of mucus into the sinuses on each instance of nose-blowing. That's up to a teaspoon of snot every five nose-blows. [The white arrows in the CT scans featured point to pools and bubbles of contrast medium that have collected in the sinuses after nose-blowing. Via Hendley et al.]

According to the researchers, the degree to which nose-blowing contributes to fluid accumulation in the sinuses is unclear, but their findings suggest that it may actually work to confound your natural plumbing by reversing the flow of mucus and slowing the draining process. The jury is out on whether this is harmful or just irritating, though the researchers do note that there is a "potential for nose blowing to introduce nasal fluid containing viruses, bacteria, and inflammatory mediators" into the sinuses, which could turn your basic cold into a more serious infection. Hooray.

So what's a snot-nosed reader to do? According to sources like the Mayo Clinic and Dr Anil Kumar Lalwani, chairman of the department of otolaryngology at the New York University Langone Medical Center, there are two preferred methods, both of which can be supplemented with sprays or tablets to reduce the swelling in your nose (which, you'll recall, may actually the bigger culprit here):

Method one: Blow your nose! But do it gently. None of this pinch-and-blow business. Instead, press your right nostril closed and breathe out gently through your left. Repeat on the other side. Not as satisfying as an ear-splitting honk, but it will keep your sinuses clear, and you'll be less likely to give yourself an aneurysm, so hey, tradeoffs.

Method two: Sniff and swallow. Or, if that grosses you out, spit it out.

Got that? Either blow your nose gently or don't blow it at all. That, or swallow it. Like a responsible adult.