Aluminium Foil Is More Awesome Than People Give It Credit For

Aluminium foil is a pretty straightforward item, but one that raises many questions such as “Does it really matter which side I use?,” and “Is it actually protecting my thoughts from them?” It’s also infinitely customisable, making it a workhorse kitchen item with a multitude of uses.

It may seem boring to you, but if you spend a lot of time in the kitchen it becomes clear how necessary and adaptable the pliable sheets of metal really are. I personnaly can’t operate my kitchen without aluminium foil, and I am here to preach the good word.

Which Brand Is Best?

To get the most out of your aluminium purchase, you’re going to want a foil that’s easy to manipulate and unlikely to tear or puncture, so just go ahead and skip anything that isn’t “heavy duty.” Earlier this year, Reynolds Wrap Heavy Duty as the winner (Great Value Heavy Duty works just as well, though the testers noted a “springy” quality.):

All of the heavy-duty foils we tried were equally strong and easy to work with, far outperforming the thinner and weaker standard foils (don’t waste your money!). But Reynolds has a slightly nicer malleability than the other heavy-duty kinds, and was among the thickest and least likely to puncture with regular use. It’s also more widely available than generic brands and comes in a better selection of widths and lengths.

Six months later, they still stand by this claim, though they recommend using the ChicWrap Aluminumn Foil dispenser for optimal rolling and cutting. However, if you don’t want to buy a fancy dispenser, you can actually use the foil’s box: just push the little end tabs in, as demonstrated in this video:

I honestly had never noticed those little tabs, so this was actually a life-changing revelation.

As you may or may not have noticed, there are two sides to this malleable, metallic sheet: one shiny and one not-so-shiny. Some people insist that the shiny side is better at reflecting heat, while others prefer to cook dull side up. According to the people who make the stuff (Reynolds), it doesn’t matter at all:

Actually, it makes no difference which side of the aluminium foil you use both sides do the same fine job of cooking, freezing and storing food. The difference in appearance between dull and shiny is due to the foil manufacturing process. In the final rolling step, two layers of foil are passed through the rolling mill at the same time. The side coming in contact with the mill’s highly polished steel rollers becomes shiny. The other side, not coming in contact with the heavy rollers, comes out with a dull or matte finish.

If you are suspicious of large corporations and unlikely to take their word at face value, there is also empirical data to back up this claim, as America’s Test Kitchen did a side-by-side baked pasta experiment:

To settle the issue once and for all, we baked stuffed manicotti covered with foil shiny side up and shiny side down. A probe thermometer inserted in the center revealed that both casseroles reached the same temperature (within a couple of degrees) in the same amount of time. To test browning, we oven-baked bacon on foil-lined baking sheets. Shiny side and dull side produced crisp, golden-brown bacon within a few seconds of each other.

So there you go: it doesn’t matter which side you use. (Unless you are using Reynolds non-stick foil. The non-stick coating is on the dull side, so make sure that is the one in contact with your food.)

Foil is one of those items that’s destined to be the subject of slightly dubious hacks and, while I don’t think it makes a good cat toy or particularly pretty present (both of which are suggested by WikiHow), there is no denying that it’s super Macgyver-able in the kitchen. Before we get to the fancy hacks however, let’s start with the basics.

I love cooking things in sheet pans, be they cookies, carrots, or dinosaur-shaped chicken nuggets, but I don’t love scrubbing off the greasy mess they leave behind. (Though, surprisingly, dinosaur-shaped chicken nuggets are virtually mess free.) Laying down a sheet of foil in your pan will save you work in the when it comes time to clean up; just throw it away and you’re done! When lining baking sheets with foil, there are a few things to keep in mind. First, due to its reflective nature and heat conducting abilities, things cooked on foil are going to cook up crispier than things cooked on parchment or any other less reflective surface. This means foil isn’t the best pan lining for thick, cakey cookies, but perfect for thin, crispy cookies such as lacies. (A metal pan will give you crispy cookies as well as foil but, again, there’s a bit more cleaning involved.)

Another one of foil’s shortcomings is that it tends to stick. This is annoying, but easily preventable; all you need to do is give it a quick spray with cooking oil. Oh, and don’t put it in the microwave; as a young Claire learned by heating up a still-wrapped Wendy’s hamburger. It just doesn’t do well in the microwave.

You also shouldn’t line your oven with foil. According to Real Simple, though it may seem like an easy solution for drips and spills, it will actually prevent your food from cooking evenly:

It will cause food to heat unevenly and, over time, can damage the oven, says Mary Ellen Camire, Ph.D., a product-development expert for the nonprofit Institute of Food Technologists. You’re better off wiping up messes after each use, when the oven has cooled but before the spill has hardened.

There is, however, no reason you can’t cover your stovetop with the stuff, for easy cleanup after frying.

Perhaps foil’s most prized attribute is its malleability, a quality which not only allows you to make really excellent hats, but customised cooking implements such as this nifty aluminium foil bacon-baking rack:

You can also line your grill with foil to harness to power of radiant heat and get a perfect crust on smaller cuts of meat without overcooking the inside:

Don’t forget the buns! Foil can be crafted into little rings, perfect for helping brioche buns keep their shape while baking. (These also make great molds for perfectly round fried eggs.)

When you’re done using aluminium to direct heat toward your dinner, you can use it to direct heat away from your dessert by making a pie crust shield:

And of course, nothing beats the ease of foil packet meals. Simply lay down a sheet of the heavy-duty stuff, place your ingredients in the center, and fold the whole thing into a neat little packet, leaving a little room on top for steam to escape. These packets can either be thrown in the oven (for which there are lots of great recipe ideas on SheKnows), on the grill (The Food Network has fifty ideas for that), or even over a campfire (Buzzfeed has a great round up for that). Once your tasty meal had been devoured, toss the foil for the easiest cleanup ever. 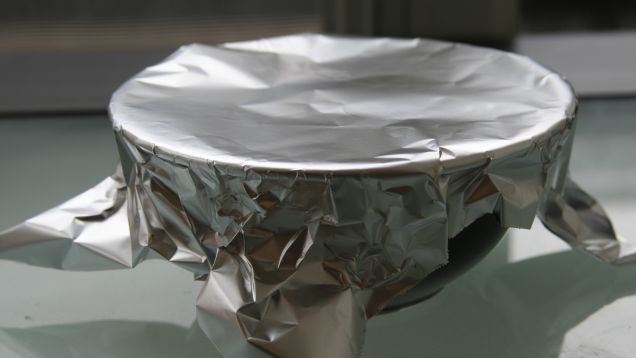 Wrapping or covering something in foil and shoving it in the fridge is perhaps the easiest, least fussy way to store leftovers. (Though I had a stepfather who was a little too lazy with his foil application, and would leave portions uncovered as if the mere presence of a the foil was enough to protect the food and keep it from drying out. Spoiler alert: It was not.)

Not only can it be folded into neat little packets or moulded to fit the top of any container, but it can’t be beat in terms of storing smelly leftovers, as the metal is impermeable to odours. The trick is to form a good seal by crimping it at the edges to ensure no stink escapes. This impermeability is also what makes it great in the freezer. Even if prepackaged foods are already wrapped in plastic, an extra layer of aluminium foil will help prevent freezer burn by blocking oxygen. If you want to get really hack-y you can even use it to super-seal plastic bags by folding a piece of foil over the opening (food already inside, of course) and running an iron over the aluminium.

One thing you don’t want to store in aluminium is acidic foods, such as citrus, berries, or tomatoes. According to Real Simple (and food science writer Harold McGee), the acids can react with metal, causing it to erode and migrate to your food. (This isn’t particularly harmful, but it’s not very tasty either.)

And that’s all she (as in me) wrote about foil, that metallic workhorse of the kitchen. Do you have any favourite uses, or perhaps a favourite brand? Maybe there’s a particularly fetching hat pattern you’d like to share? Let me know in the comments!