I’ve had an old Acer Aspire netbook for quite a few years now. Pretty much since they started coming out. And it just can’t handle Windows 7 anymore — so I decided to try to make it purr again with Linux. Here’s how I did it.

After several trips, the trusty netbook was at a stage where it was unusable. I wasn’t demanding of it — all I used it for was word processing and internet browsing. Ideal for overseas work trips and holidays. But even those basic functions were becoming unbearably slow, sometimes taking minutes to load up. But with some of the lightweight Linux distributions out there, old hardware can be made useful again. Even with a depressing benchmark test like this.

My first step was to load Ubuntu. I did this fairly simply by following the link on its site to download a USB installer, popping that in, and after backing up all the necessary work files, starting the format.

This was all fairly straightforward. Ubuntu has done a good job of that. Once it was installed, it had all the basic functions I wanted, and while I’m not that familiar with Linux, it was easily usable.

The problem is, it was still slow.

I hadn’t really looked up the recommended specs for Ubuntu, but clearly they’re higher than what my netbook has: An Intel Atom N450 @ 1.67GHz, with 1GB DDR3 SDRAM @ 1MHz. Loading Ubuntu had improved things, but it basically had upgraded it from “unusable” to “unbearably slow”. I was looking for a bit of a better improvement than that.

So I looked up some info on super lightweight Linux distros, fully aware that the pendulum was swinging the other way and I was overshooting the mark. I just wanted this little thing to run something that wouldn’t challenge it at all.

What I decided on was CorePlus, the “heavier” version of TinyCore, a super lightweight distro that’s about 15MB in total. CorePlus comes with such luxuries as WiFi support and graphics in the OS, for the more “bloated” size of 75MB. If this couldn’t make the little guy go fast, then it was a hopeless task.

I downloaded the image from its site, and used UNetbootin to make a USB installer. Then, I started the new format on the netbook. 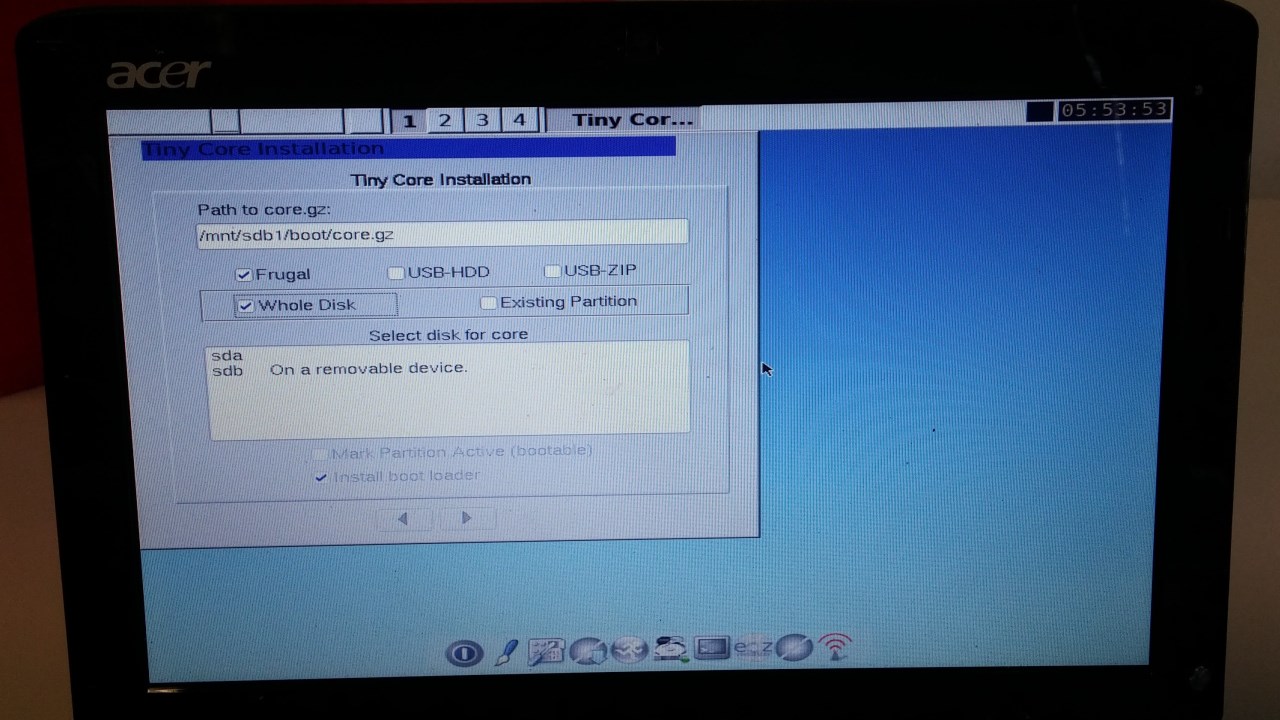 This time, things were a little less user-friendly, and for a newbie like me, it was harder to know what the hell was going on. I ended up installing the OS onto the USB drive instead of the actual HDD, and wondering why it wouldn’t boot properly. It took me an evening to finally do it properly.

Here it is today, running Lifehacker:

The good news? It runs extremely fast now. There’s no lag, on anything. I don’t know what I’ll do with my newly free 250GB though, seeing as all I can do on the thing is type out documents and surf the web. It feels great, and in theory, CorePlus has everything I need. I could feasibly take it on a work trip, write and organise everything, and be happy.

But as I said before, this is overshooting the mark. CorePlus, while being the more “luxurious” option, is incredibly bare-bones. I don’t need anything too special, and I’m happy working in a terminal for things like WiFi, but I’m considering meeting my netbook somewhere in the middle here.

It might take a few more attempts. I’ve got my eye on Easy Peasy next. But I’ve shown myself and the little netbook (which I call Mutalisk, because the Starcraft fans out there will know it comes from A-spire… Nyuk, nyuk) that it’s possible for this outdated fossil to sing again.

It’s great having a little netbook that I don’t actually care about. It cost a few hundred, years ago, and rather than spend a few more hundred now for a new one, it serves its function and I care even less about it. That’s wonderful for the thing I use it for most – travel – because if it gets stolen, who cares? Working in the cloud on terrible hardware — it feels a lot like freedom.