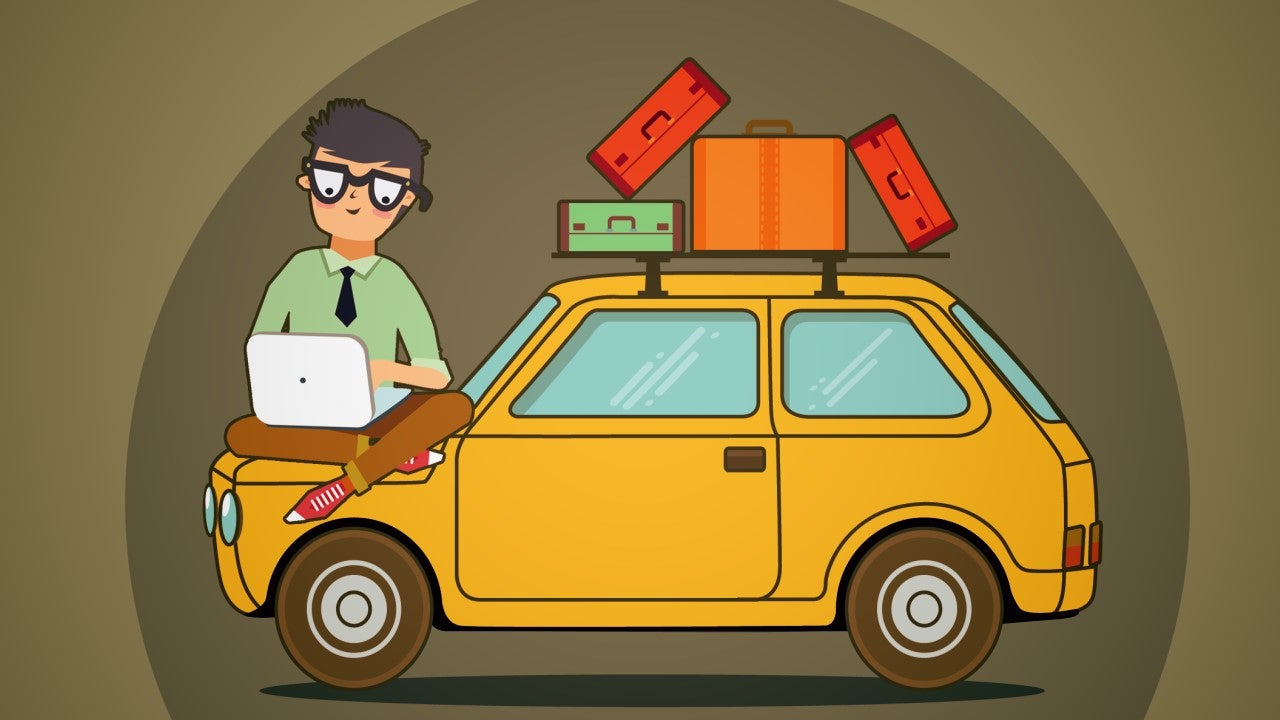 Today I’d like to share some of what I’ve been learning about working on the road, which can be tough. I’ve been successful, but overcoming the lack of energy to do work has been an interesting challenge.

This post originally appeared on Zen Habits. Image by Delices and Creatarka (Shutterstock).

I’m about two weeks into my Grand Travel Experiment, and I’m happy to report mostly successes! The biggest successes have been with working every day, and my daily workouts. I’ve also been meditating every day, though not as long as at home. I’ve (mostly) controlled overeating by trying to stop before I get too full, which is a big win for me while travelling, though I haven’t succeeded in every meal. It really helps to have this experiment going to help me be mindful.

In the past, I’ve done all my work before the trip, so that I can be completely focused on being present during the trip, and not worry about work. But that’s really tough, and I decided it’s more sustainable to be able to work while travelling. So I purposely didn’t do any work ahead of time, so I’d be forced to do the work while travelling.

My plan: Wake up before the kids, go to a coffee shop, and do an hour’s worth of work before doing our daily walking around and exploring a foreign city together.

How it has worked out so far: I only went to a coffee shop on the first few days. It turned out to take too long to go to a coffee shop, do an hour’s work, and then come back. So I’ve been waking up a bit early and doing my work as the kids get ready. This is a bit distracting, as all the chaotic activity of six kids and a wife getting ready can be noisy and busy, but I have been able to get my work done despite this. I’ve had less energy, because we’ve been walking an incredible amount, but I’ve still overcome that obstacle as well.

Here’s what has worked for me:

1. Don’t give yourself a choice. The hard part comes when we say, “Should I do this now or not?” and then we realise we have tons of other options, like checking social media and reading the news and sending pictures to people and looking at cat or robot photos online. What has worked for me is telling myself there is no option. Work is something I’m going to do, non-negotiable, just like I’m going to do the basic duties of being a parent, without question. I have felt temptation to let myself off the hook, but then I shake off that temptation and just do it. Giving myself a choice would lead to pretty bad results.

2. Have a challenge for accountability. It’s been very helpful that I announced this “Grand Travel Experiment,” weeks ago on my blog. I know that I’m going to report back to my readers, and I don’t want to report complete failure. This is mostly helpful in that it reminds me to be mindful of my urge to rationalize or give up. I think we all have those urges and rationalizations, but we mostly don’t realise that they’re going on — we just follow them unconsciously. Having this challenge forces me to realise what I’m doing, and make a conscious choice.

3. Have people who expect the work. Similar to the point above, it really helps that I have my gorgeous Zen Habits readers, expecting my blog posts, as well as my Sea Change members expecting articles and emails from me on a regular basis. I’m keenly aware of this expectation of me, and I don’t like letting people down. So I do the work, without giving myself a choice.

4. Get it done, then don’t think about it. When we’re out walking around, seeing the sights and tasting delicious food, I don’t want to be worrying about work I have to do. So one motivation for me to get my work done is to not have to think about it later. This keeps me focused: I only give myself an hour or so to do my work, so I can’t mess around. I have to be on task, be sharp, get it done, and then I have the luxury of not thinking about work for the rest of the day.

So that’s what I’ve been doing, but I don’t claim that everything has been going “perfectly”. I get tired and lazy, I got sick for a couple days (nothing too bad, just a fever), sometimes we’re rushing out the door because we want to get an early start. And so the temptation is to forget about the work, but I know that won’t turn out well. So I try to get the work done anyway.

I think the things I’ve been learning about working while travelling should apply to non-holiday work as well. It’s amazing — I’m able to do pretty much all of my regular work in a short period while travelling, which tells me maybe I’ve been stuffing around quite a bit when I’m at home. A great wake-up call!

Staying Motivated to Work on the Road [Zen Habits]