If You’re Not On IPv6, It Could Cost You A Fortune

We’ve long known that the pool of IPv4 addresses was near exhaustion — and as Tim Chown explains, that now means you’ll soon pay dearly if you’re not ready to shift to IPv6.

The Internet Protocol (IP) has been phenomenally successful. From an experiment in the 1970s, it has evolved to an internet spanning the globe, connecting billions of users. IP underpins the enormous success that is the World Wide Web — and its ubiquity has led to the convergence a wide range of technologies upon it, including digital phone calls made using Voice-over-IP (VoIP).

But IP isn’t just successful, it’s valuable too. IP requires computers attached to the network to have an IP address. The current version (IPv4) has a 32-bit addressing scheme, which provides a total of 232 or 4.3 billion globally unique addresses. While that may seem like a lot, historically IP address space was given out in large blocks — in the early days up to 16m addresses at a time.

As available addresses disappear, their value grows, and a thriving market is developing around the resale of unused IP addresses. Recently the UK government’s Department for Work and Pensions sold unused addresses within the enormous space allocated to it to a Norwegian company, Altibox, for £600,000.

IPv4 addressing, a hierarchical address where each element is assigned as network or host bits. Source: Wikiemedia Commons

The need to conserve IP addresses was realised as early as the 1990s. This led to the creation of a system of five regional internet registries (RIRs) under the global Internet Assigned Numbers Authority (IANA). The five RIRs requested blocks of 16m addresses at a time from IANA as needed, from which they would assign addresses for use by others. In February 2011 IANA allocated the last of its largest blocks, one to each RIR, and declared the IPv4 address space exhausted. 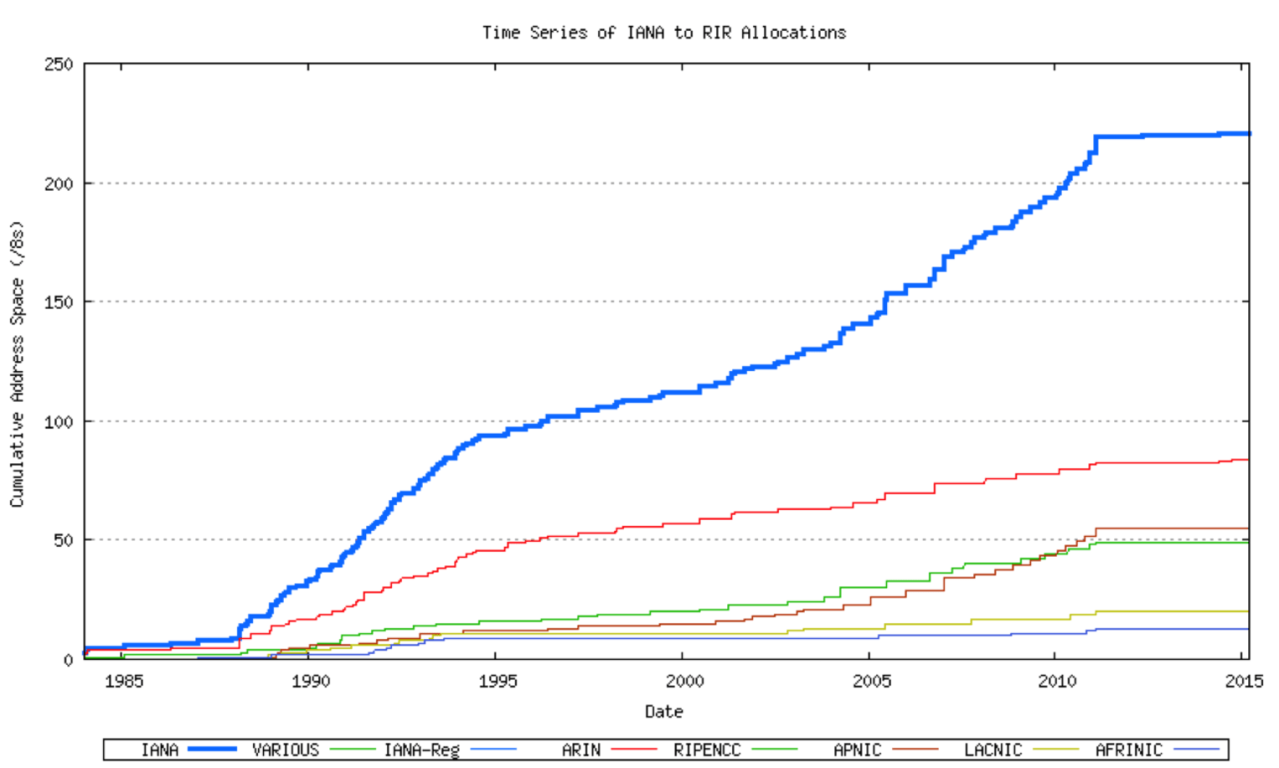 Yet, reading this online as you are, clearly this has not brought about the end of the internet. But RIRs have become much more strict about assigning addresses. For example RIPE NCC, the European RIR, now provides at most only a block of around 1000 addresses at a time. The development of network address translation (NAT) has hugely slowed the consumption of globally unique IP addresses, allowing an entire network of client computers, such as in your own home network, to connect to the internet while sharing a single globally unique IP. However, it’s clear a new approach is needed — and in the meantime a growing open market for IPv4 addresses is emerging.

Putting a value on IP

[related title=”THE IPV6 CHALLENGE” tag=”ipv6F” items=”3″]Microsoft made the first big purchase of IP addresses in March 2011, buying around 660,000 addresses from bankrupt Nortel for $US7.5m, or around $US11 each. This figure has remained fairly stable since, with one broker recently indicating variance from $US7 to $US13. These transfers are publicly viewable, at least under RIPE’s transfer policies in Europe.

We’re likely to see much more trading activity as the RIRs edge closer to exhausting their allocations — which could happen within weeks for the North American RIR, ARIN. Price fluctuations will depend on IPv4 demand, which in turn will depend on how quickly and painlessly its successor, IPv6, is deployed. 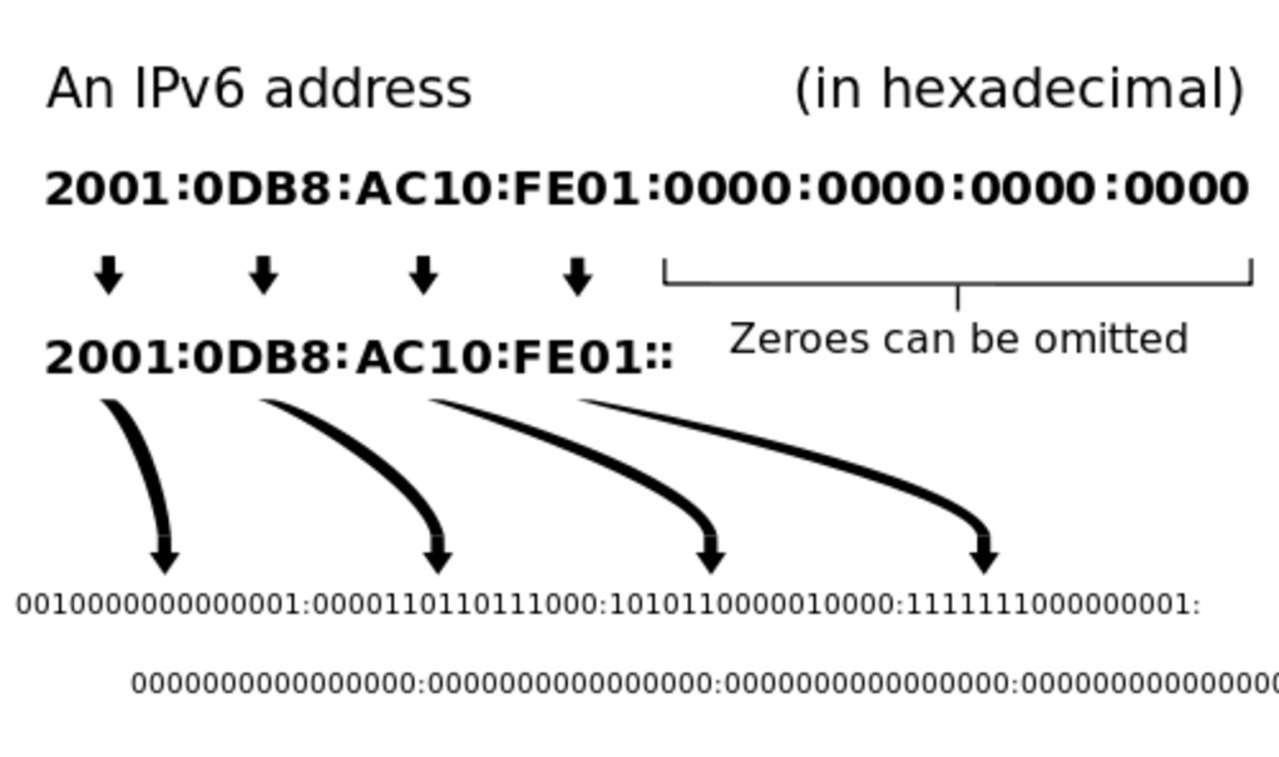 The core IPv6 specification was published around 20 years ago, and today all major operating systems and routing platforms support it, yet without any urgency to move from IPv4, few have done so.

So what’s the hold-up? One problem is its incompatibility with IPv4: an IPv6-only device cannot communicate directly with an IPv4-only device, instead a translation mechanism is required. Nor is there a deadline to drive the switch, as there was to fix the Y2K bug or with the UK’s phased analogue-to-digital television switch-over.

The initial plan for global IPv6 deployment, as much as any plan existed, was to transition before IPv4 address space ran out. Instead, we’re now in the position of individual ISPs and organisations trying to work out how to implement IPv6 while sustaining their IPv4 operations.

Some larger content providers offer their services over both IPv4 or IPv6 — Google and Facebook, for example, have done so since World IPv6 Launch day in June 2012. Google’s public IPv6 stats show that around 6% of all its customer traffic is now IPv6, heading towards 10% within a year. Content delivery networks such as Akamai also offer IPv6, allowing their customers an easy way to enable IPv6 for their own services. Akamai’s own stats show it recently topped 1m hits per second via IPv6 worldwide. ISPs have also begun IPv6 roll-out, perhaps the biggest example being Comcast in the US. 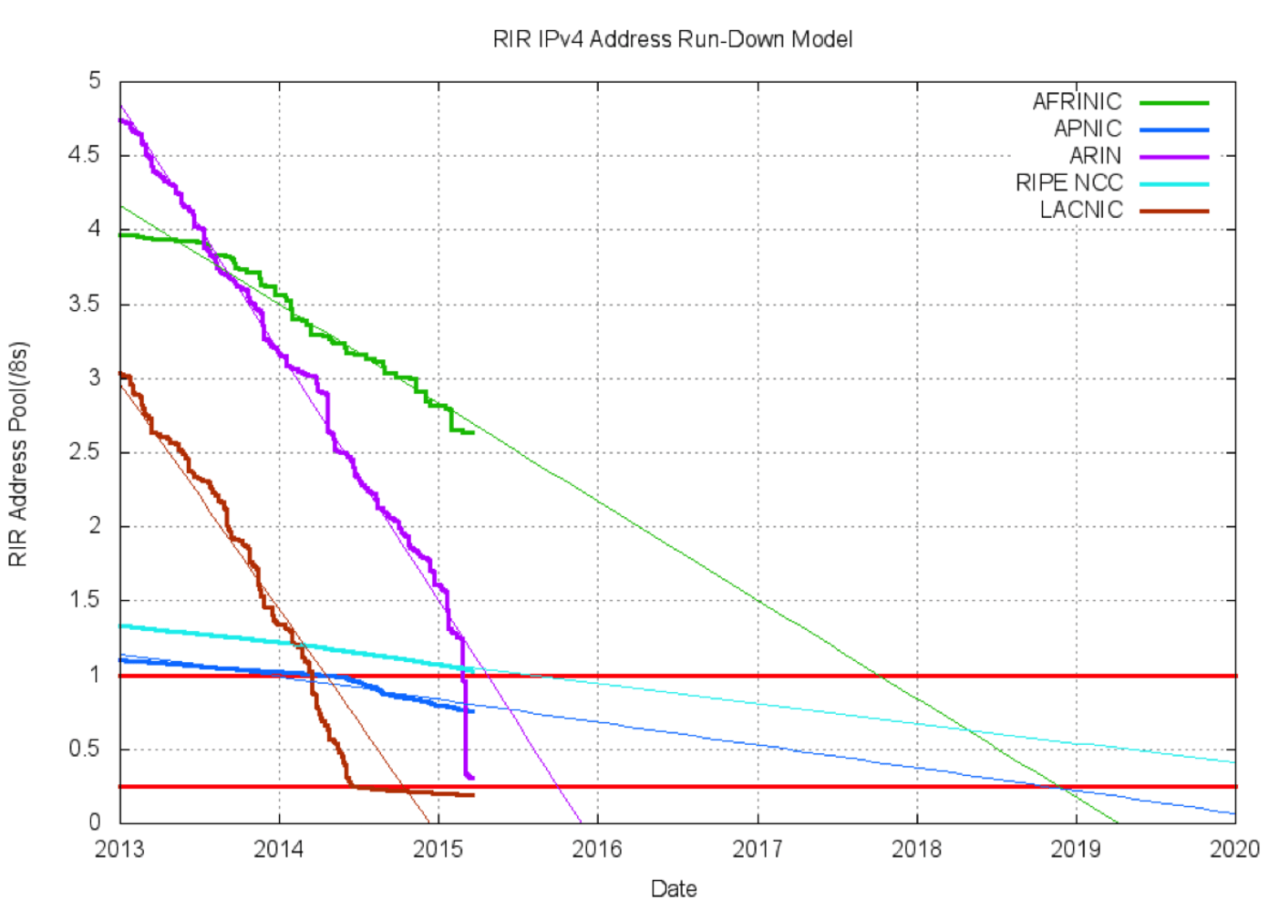 Inevitably, there will be a (perhaps very protracted) period of “dual stack” deployment, where both protocols are offered to cater for older devices. But this adds complexity and isn’t a long-term solution. Running IPv6-only networks, translating to an increasingly “legacy” IPv4 where necessary at the edge, is the most viable future model. And with providers such as Google, Facebook and Netflix already IPv6-enabled, a typical home network may already see as much as 50% of its traffic being natively IPv6-capable.

What difference will IPv6 make?

Simply put, IPv6 allows internet growth. It’s unfortunate that the general public will be blissfully unaware of it, despite standing to benefit from the new internet technologies and devices it will enable. No one should need to ever see or, heaven forbid, have to type in a IPv6 address. In that sense, IPv6 is set to become the unsung hero of the internet. With its vast globally unique address space, IPv6 allows every device on the internet to be directly addressable — no need for complexities such as NAT or limitations on running services from home computers.

For those in charge of networks or developing applications, IPv6 simplifies operation and design — reported to be a major driver for Comcast’s IPv6 deployment. Facebook has recently announced that its internal network traffic will soon be IPv6-only. These are big indicators of an IPv6 future. For application developers, the benefits are less readily realised until a significant portion of their customers can use IPv6, but the potential is there.

For the internet to meet the increasing demands of its connected users, and certainly for the much-touted “Internet of Things” of a multitude of internet-connected devices to be made possible, the move to IPv6 is essential.

Tim Chown is Lecturer at University of Southampton.