All The New Windows 10 And Office Features

From free upgrades for (most) Windows users through to a new push into holographic computing, Microsoft unveiled a lot of Windows 10 and Office features today during a media briefing. We’ve rounded up all the key announcements — and looked into some of the key issues that weren’t discussed.

Windows 10 Will Be A Free Upgrade

As we reported earlier, for the first year after release, Windows 7, 8.1 and 8.1 Phone customers will be able to upgrade for free. The stated goal here is to move as many customers as possible onto Windows 10. Whether Microsoft will continue to promote multiple skews of Windows 10 for home and business customers, or instead move to a single platform, remains to be seen. It’s also not clear how this will play out for businesses which pay for maintenance and upgrades as part of a site licence. What is clear: Microsoft servers are going to be hammered by upgrading users on launch day.

A New Windows 10 Build Next Week

A new build of Windows 10 will be released next week, and will be available to anyone who has joined the Windows Insider preview scheme. So far, 1.7 million people have signed up for that program. It’s unlikely that many of the new features revealed today will be in that first build, however — we know, for instance, that the newly-announced Project Spartan browser won’t be included. The new build will have support for 25 languages (up from 4 in the current release). The first public preview release of Windows 10 for Windows Phone devices will follow in February.

As had been widely rumoured, Microsoft’s voice assistant/Siri Clone Cortana will be built into Windows 10. Cortana has a permanent spot on the taskbar, and can search your local hard drive . As with the Windows Phone version, you can edit Cortana’s notebook to remove personal information.

Will we see Cortana in Australia when Windows 10 launches? Given that Cortana on Windows Phone was initially a US-only release, this might prove to be the case with desktop Cortana too — though the fact that a beta Australian version of Cortana did eventually surface gives us some hope. 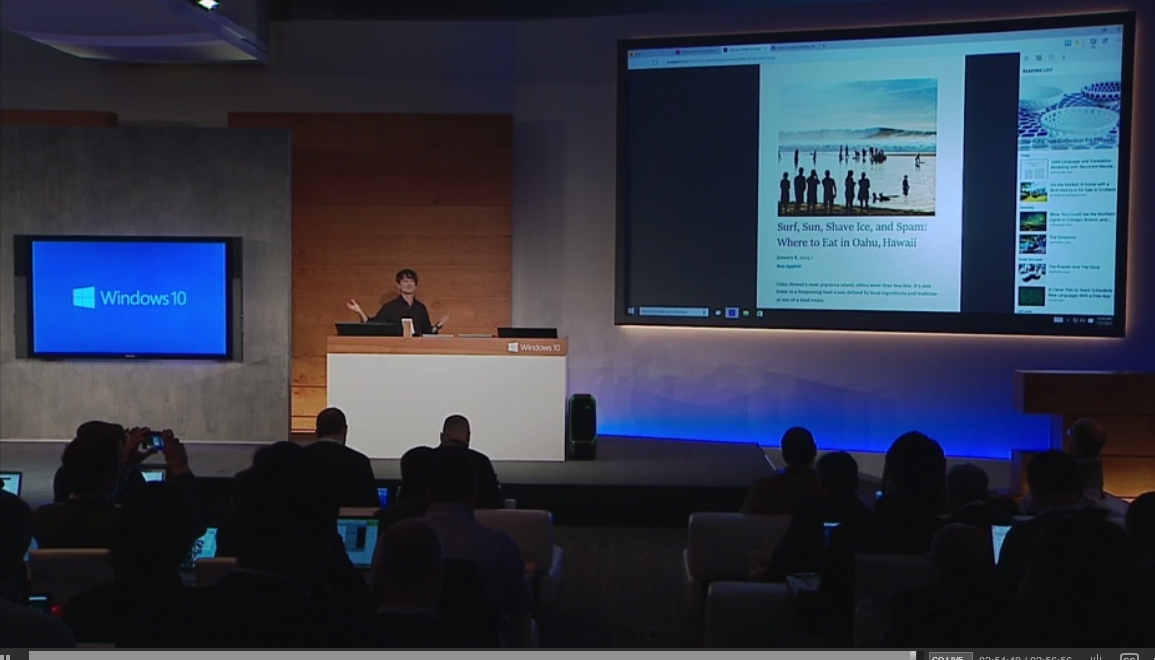 Microsoft confirmed its plans to develop a new browser, codenamed Project Spartan. (We’d expect Internet Explorer to remain for backwards compatibility). As well as a new rendering engine, Spartan will include the ability to take notes on a given page, using touch, stylus or keyboard; a reading mode to display long articles more attractively; and native support for PDF viewing. 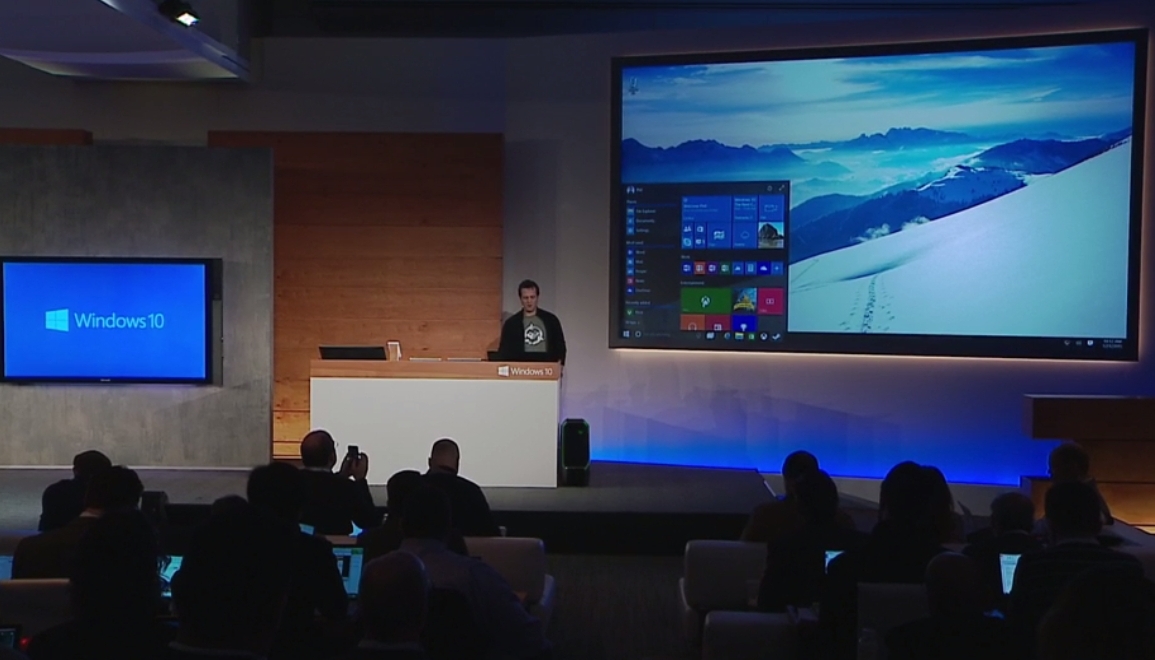 Features demonstrated during the launch included the ability to launch a full-screen Start menu on tablets, and to switch between tablet and desktop modes. One welcome improvement: Control Panel and Windows 8 Settings, which currently use different interfaces and are in different locations, are going to be unified. The Charms bar also now displays much more information.

Office Bundled With Windows 10 On Phones 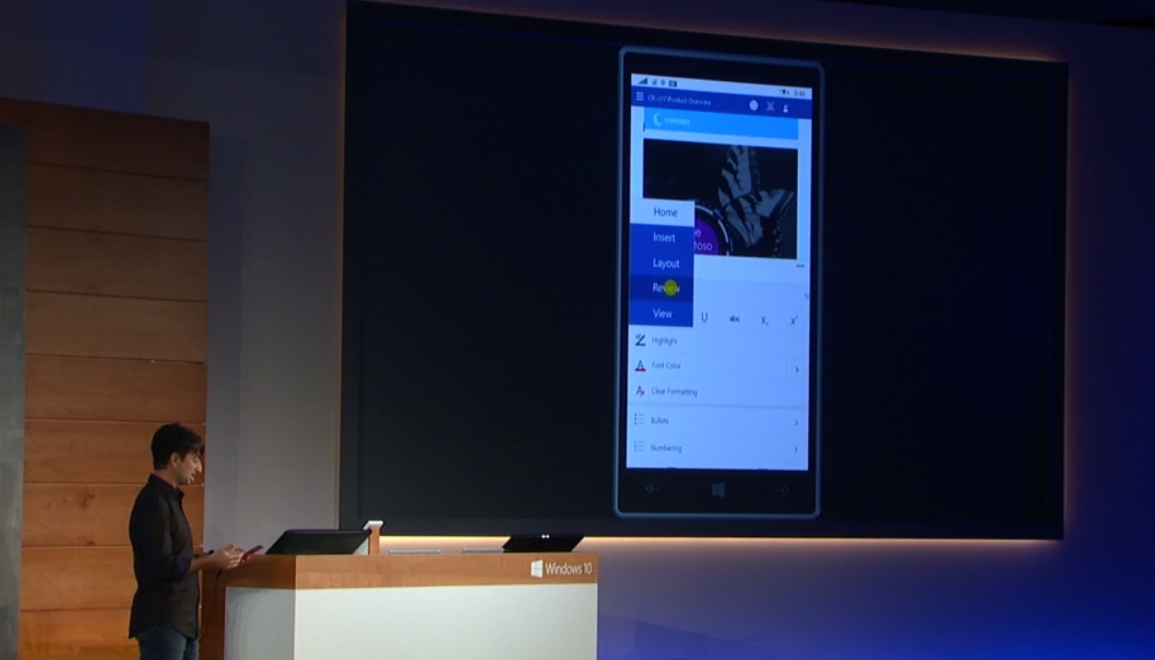 Windows 10 Phone will include Word, Excel and PowerPoint as built-in apps. As with the existing Android and iOS apps, we’d expect that some features will be disabled if you aren’t an Office 365 customer. The Ribbon has been adapted for use in mobile environments (again echoing the approach used on other platforms).

Universal Apps: Sometimes But Not Always 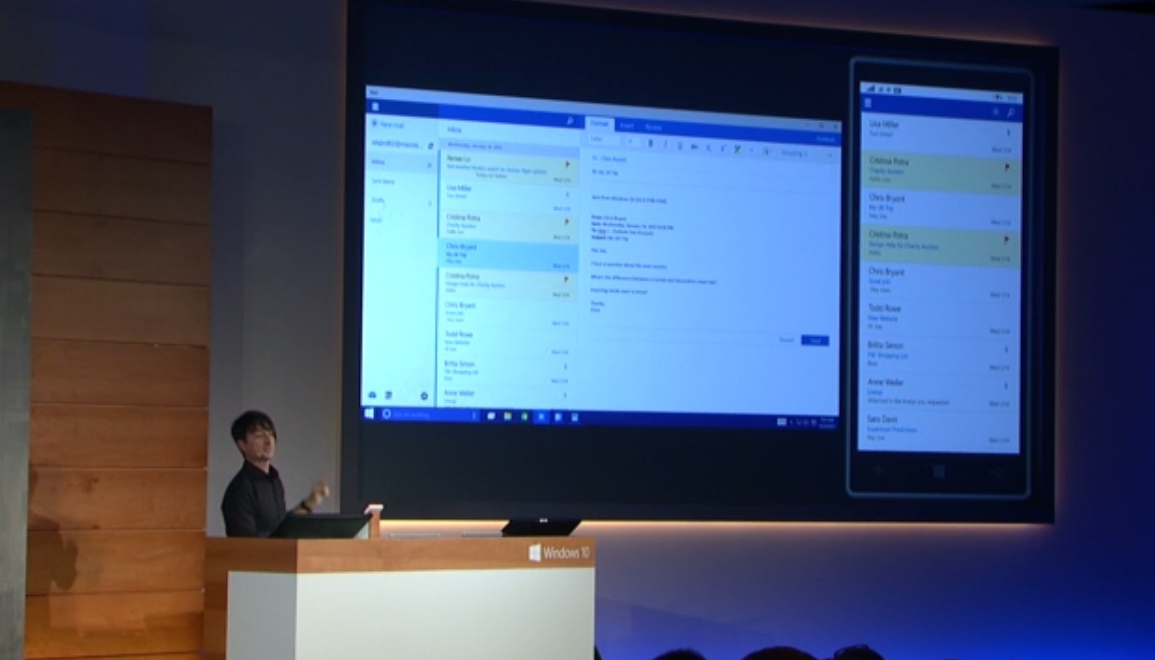 One of the key selling points for Windows 10 has been universal apps: code that can run on computers, tablets and phones. For instance, Microsoft is developing a version of Outlook that is designed to run on both phones and tablets. That release includes the ability to delete messages by swiping left or flag them by swiping right.

Clearly, though, this approach has its limits. Development of Office for desktop will continue separately to Office for phones in many areas — interfaces that work well on a small touchscreen simply aren’t productive in a keyboard and mouse scenario. (Outlook would appear to be the exception here.) 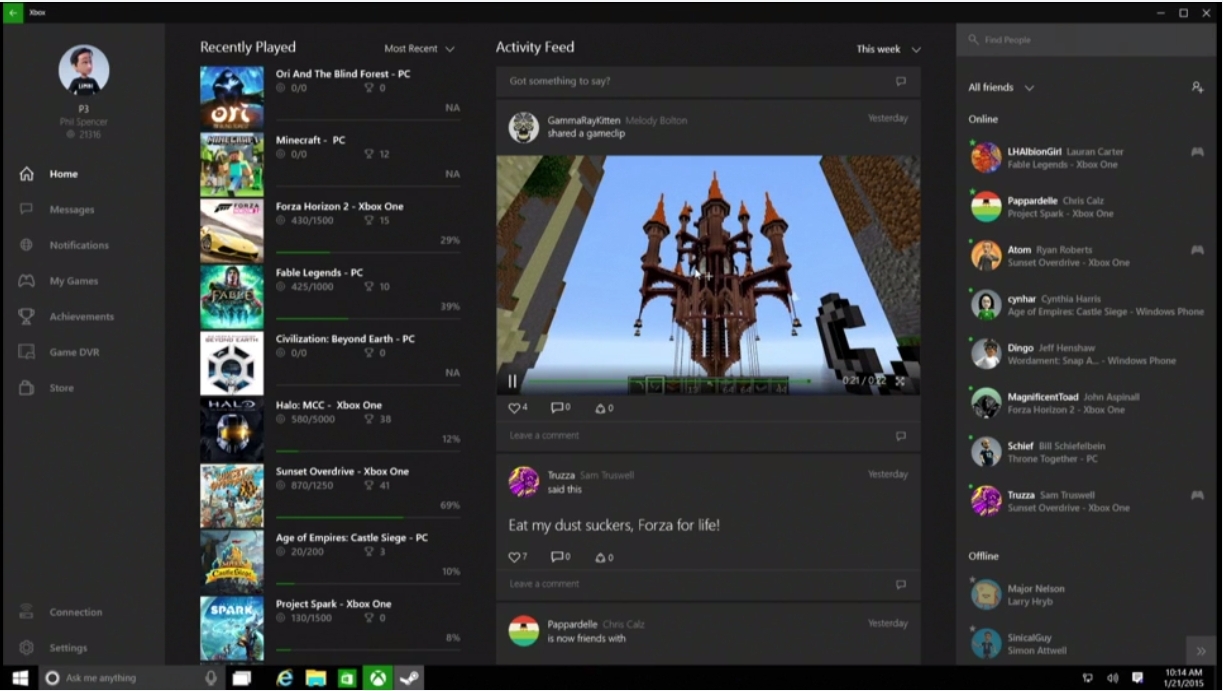 Windows 10 will include an Xbox app which closely mimics the existing Xbox One interface. The Xbox One will be able to stream games to any other Windows 10 device, so you could (for instance) play a game on your laptop that is console-only. You’ll also be able to record games using the Windows-G shortcut, including the ability to grab the last 30 seconds of any PC game you’re playing. 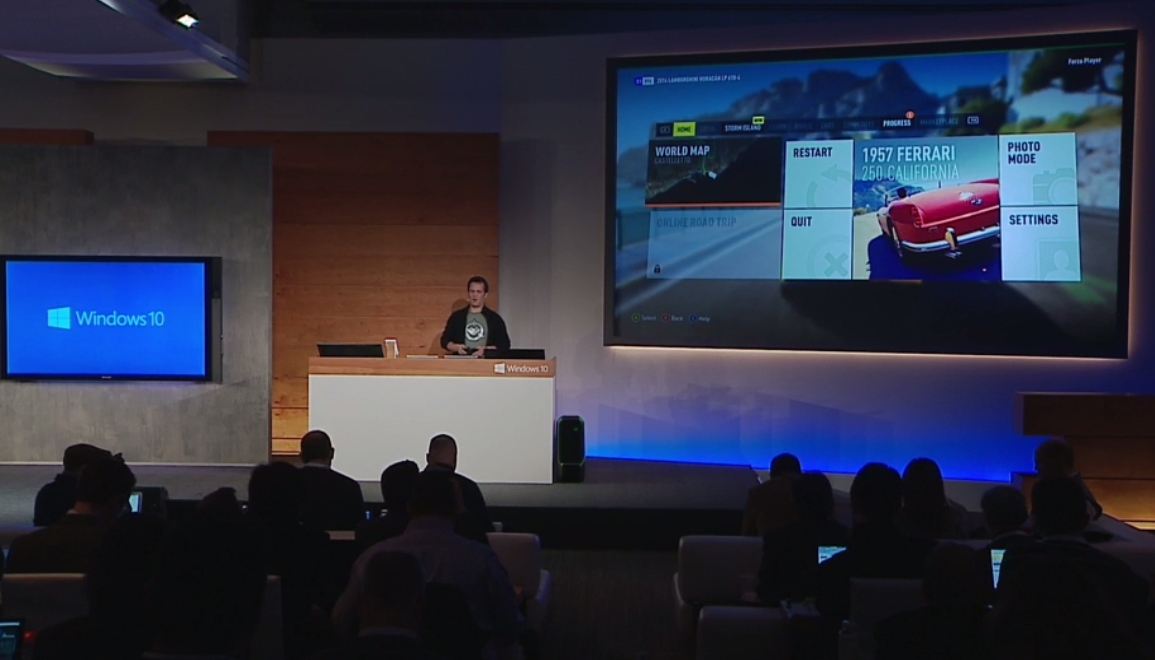 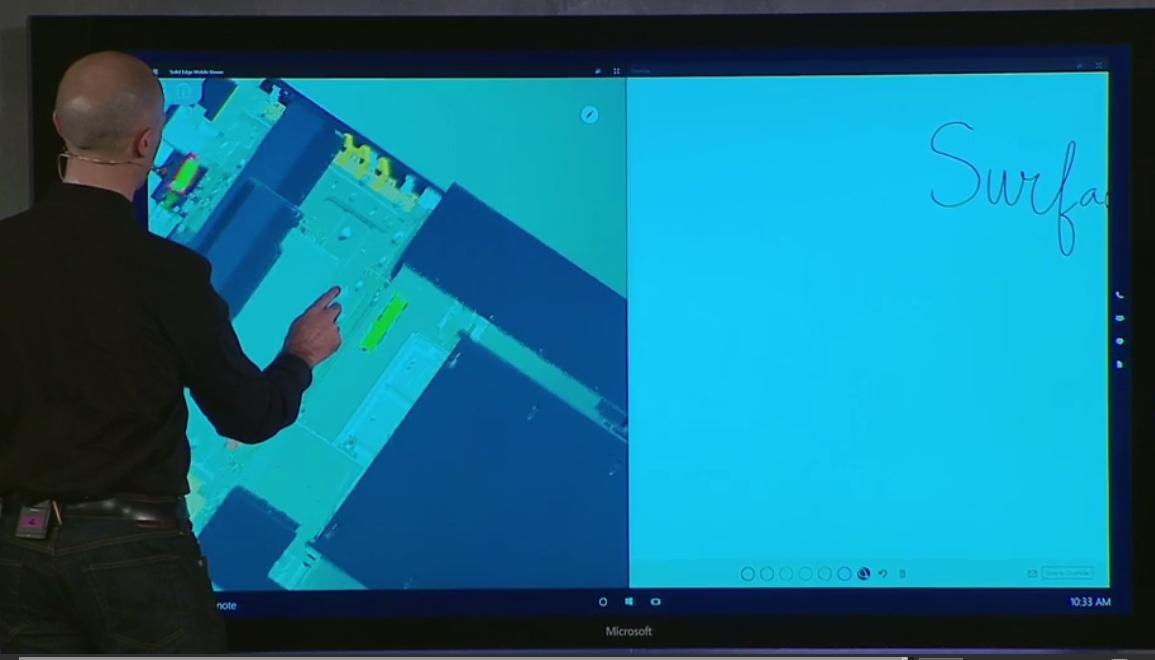 Microsoft demonstrated the Surface Hub, an 84-inch computing screen with a 4K display designed for use in meetings and for collaborations. The content displayed on the screen can also be automatically projected to other Windows 10 devices and saved into OneNote. This is said to be available this year, though there aren’t any details on pricing. We wouldn’t be surprised if this is initially a US-only release. 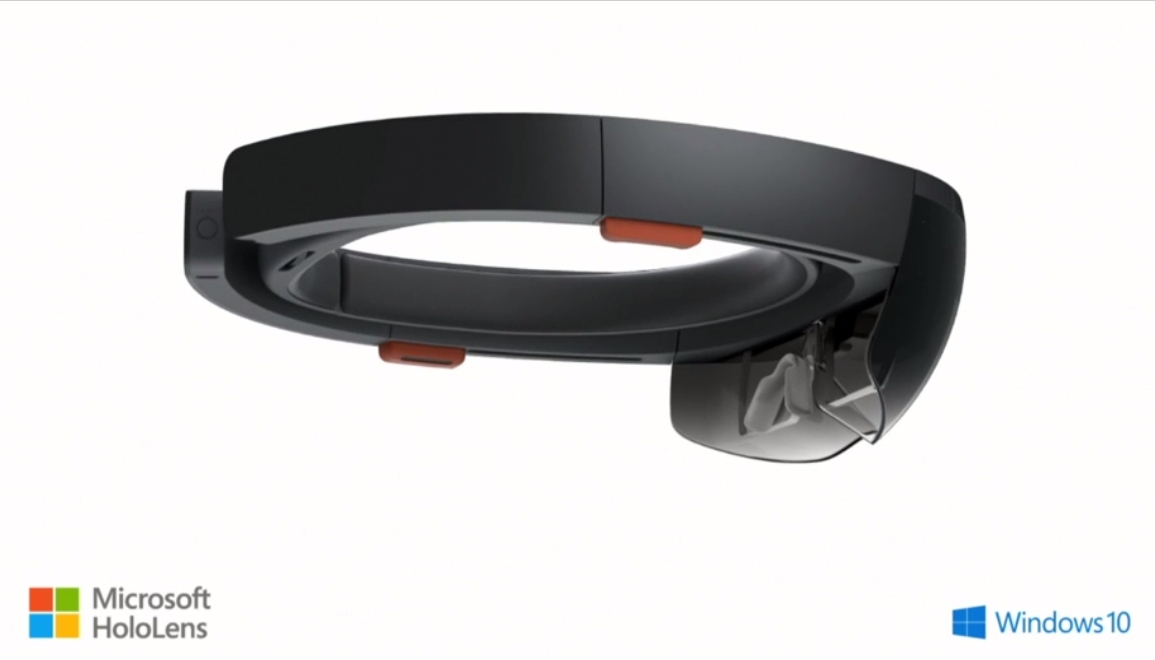 The big surprise of the announcement was Windows Holographic: a version of Windows 10 that is designed to run on a virtual reality headset which lets you interact with holograms. The headset is called the HoloLens, and includes a dedicated “holographic processing unit” as well as a CPU and GPU. APIs to support holographic interaction are being built into Windows 10. 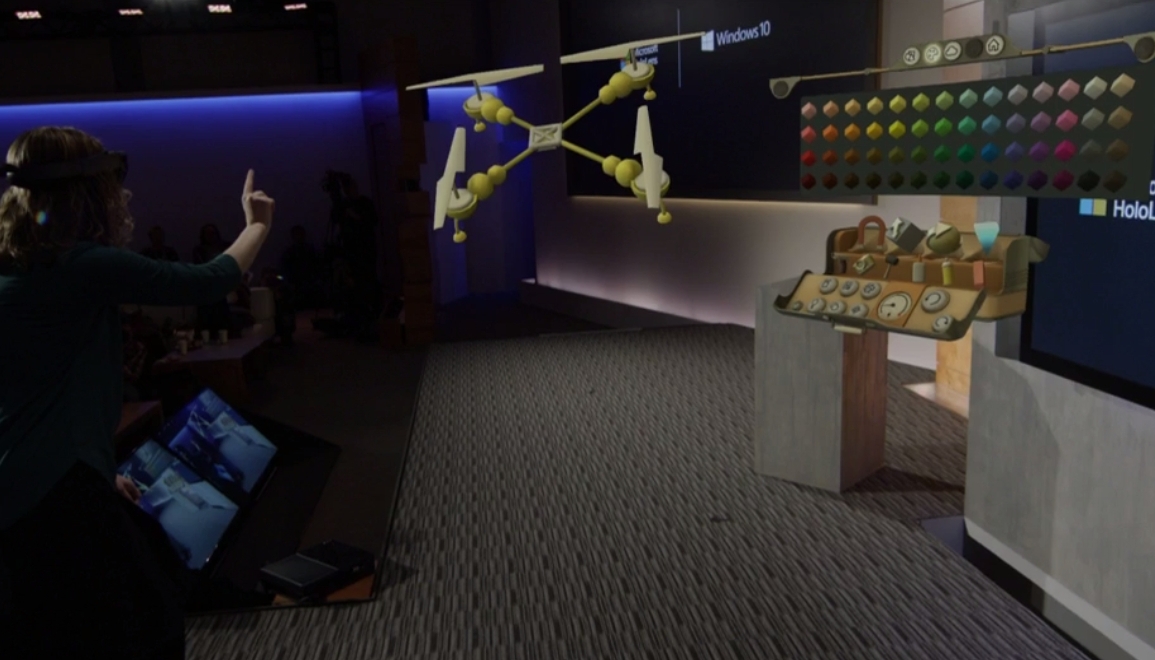 There was also an extended (and impressive) demonstration of Holo Studio, a tool for designing 3D objects using the hologram interface. We’re told this will be available in the “Windows 10 timeframe”. That doesn’t necessarily mean this year, since Windows 10 is likely to be the flagship version for at least two years.

What We Didn’t Learn 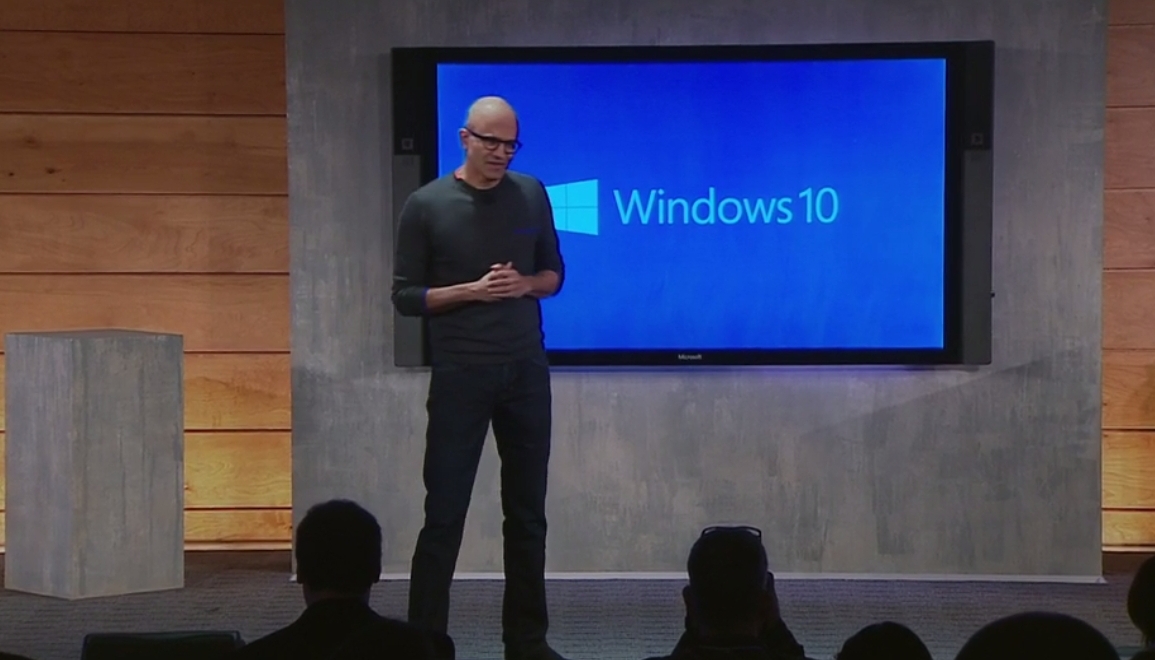 There still isn’t anything like an official release date for Windows 10. Presenters repeatedly mentioned that the features being shown off today will roll out over the next three to five months, which means the beta testing period will run until at least June. Microsoft will presumably want Windows 10 to be released before the end of calendar Q3, so that it can be available on PCs and tablets and phones for the Christmas period. However, the free upgrade strategy does mean that people can buy Windows 8.1 devices with some confidence.

The focus for today’s launch was squarely on the Windows consumer experience, but the Windows 10 interface will also need to be added to Windows Server releases. Those are supposed to be on a yearly upgrade cycle anyway, so we’d expect a new server release this year.