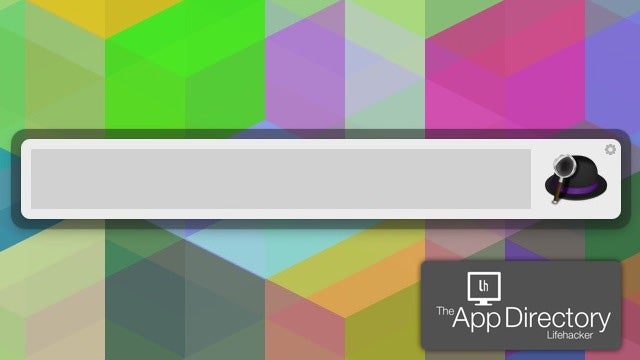 Over the years, Macs have had lots of options when it comes to app launchers. Alfred is our pick because it manages to balance features with usability. Anyone can pick it up and start using it, and there’s plenty of room for expansion if you want to dig deeper into automation.

Alfred is probably the easiest to use of all the app launchers. Within minutes, you’ll be set up and ready to start searching for programs, files, online and whatever else. The built-in tools make it so you can instantly search through contacts, system commands, iTunes, Email and more. You can also do anything you can do in Spotlight, including performing Calculator functions and searching for Dictionary definitions. But where Alfred really excels is in its workflows. Workflows make it so you can instantly trigger a series of AppleScripts, open files in specific apps, instantly organise folders and more. The best part is that even though making workflows is pretty easy as it is, you can also download other people’s workflows so you don’t have to go through the work yourself.

To get the most out of Alfred, you’ll need to pay for the Powerpack. That said, there’s enough in the free version to get you started and see if you like the program in general. Likewise, for all it can do, Alfred still isn’t quite as powerful and customisable as other launchers, so power users might find themselves wanting for features.

LaunchBar was the first real app launcher and it’s still one of the best. Launchbar 6 brought the app up to date in a lot ways, including a visual overhaul that makes it look a lot nicer with modern versions of OS X, new themes, instant search and more. Launchbar 6 also brings in support for extensions, which means you’ll be able to write your own scripts and trigger them with a shortcut, but time will tell how great these are. For now, Launchbar is a great alternative to Alfred for anyone looking for a little more functionality and who don’t mind a steeper learning curve.

Quicksilver, or previous top pick, is still the best free app launcher available. Unfortunately, Quicksilver just isn’t quite as intuitive and easy to use as Alfred. It takes a bit of work to make Quicksilver really functional, and it’s not always fast. You can do a lot with it if you’re willing to invest the time in it, but it doesn’t have the surface-level appeal that makes Alfred great.

Spotlight is built into OS X. While it’s not exactly an app launcher by definition, it can do everything the average user needs. For example, with just Spotlight you can make calculations, look up words, move files, launch apps and plenty more.

There are, of course, different styles of app launchers as well. Apptivate lets you assign hotkeys to apps for quick launching. Apps like Bevy and Overflow give you a more OS X Lion Launchpad-style experience. And, of course, there are several others.