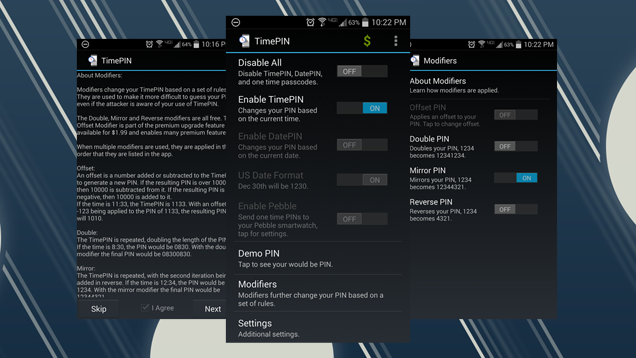 Android: Four-digit PIN codes for your Android lock screen may not offer enough security, depending on your situation. TimePIN changes the PIN code dynamically to make it harder for someone to gain access.

TimePIN will allow you to set your PIN to the current time or date, then use a modifier to change the PIN even further. The double, mirror and reverse modifiers all come with the free version of TimePIN. The double modifier simply repeats the PIN, so 0830 becomes 08300830. The mirror modifier mirrors the PIN, so 0830 becomes 08300380. Finally, the reverse modifier turns the PIN from 0830 to 0380. The paid version also includes the offset modifier, which lets you choose a number to add or subtract from the PIN.

To prevent you from locking yourself out, TimePIN has two failsafes. The first is enabled automatically and lets you use a default PIN you set to gain access after a reboot. The second lets you use the default PIN after three failed unlock attempts. If you prefer not to use the second failsafe, you don't have to, but the first one is required.

TimePIN is a nice way to increase the level of security on Android, especially if you worry people will see you enter your PIN. Keep in mind that encrypted devices aren't supported yet, but that may be added in the future.