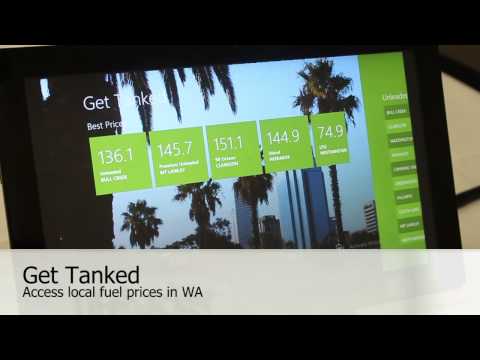 benefit of that approachTechEd Australia 2012

AppFest was a 24-hour hackathon that happened at the beginning of this week prior to the main TechEd kickoff. The goal was to promote development on Windows 8, showcasing how easy it is to develop apps. Check out the video for a hands-on overview of five of the apps created in that 24-hour period: Feedback Loop, Get Tanked, Red Cross Resource Availability System, Real Estate Manager and Diabetic Buddy. Impressively, many of the teams working on the projects had not met prior to the event.

Developers were encouraged to use Windows 8 features such as Semantic Zoom and the Share and Search charms. Most teams used Team Foundation Server on Azure to keep the source code organised between team members, a challenging endeavour at the best of times, made worse by sleep deprivation.

So what advice would the team members offer? The overwhelming consensus was that sticking to the pre-defined controls and templates available for Windows 8, particularly in Visual Studio 2012, made the task much easier. “Using existing features allowed us to do a lot with not much work,” said Kym Phillpotts from the Feedback Loop team. “Implementing semantic zoom takes two lines of code once you know it.”

“Use the template controls because hacking up your own is a challenge,” agreed Myles Eftos from the Get Tanked team.

“We mocked it up with standard tools,” said William Hiew, the designer of Real Estate Manager. “I have no background in HTML and CSS and I built it using what they had given me. ”

Knowing web design tools could be helpful, even if you don’t have full-blown coding skills. “What was interesting to us was how many of the web development techniques we could pull over, said Eftos. “A lot of what we did was based on CSS. Having web designers who are used to design and aesthetics makes sure they look really good.” Phillpotts agreed: “A good workflow would be to mock it up in a browser first.”

Unsurprisingly, Visual Studio 2012 was singled out as the most useful development environment. “I was surprised to see how easy it was to develop using the Microsoft tools,” said Jagdish Mehra from the Red Cross Resource Availability System. “Visual Studio is a pretty good piece of software,” agreed Scott Quayle from the Diabetic Buddy team. “It’s really hard to make mistakes”

That doesn’t mean you can’t throw in additional resources. “There are a lot of Windows 8 open source libraries out there,” said Phillpotts.

Disclosure: Jason Cartwright and Angus Kidman are attending TechEd 2012 as guests of Microsoft.