Citrus fruits are some of the most versatile gifts Mother Nature throws our way. Life gives us lemons, and we use them to make everything from curd to salad dressing. In fact, we’ve found ways to use the whole darn thing. Of course the fruity middle of a citrus fruit is great, but there is even a way to make the peel taste good.

A simple candied orange peel tossed in sugar is a sweet, aromatic, texture-filled delight. Sadly, making them via the traditional method can take several hours. Well, we ain’t so traditional over here. Here’s a trick cuts the lengthy process down to a fraction of the time.

Why does candied orange peel take so long to make?

There are three parts of an orange to consider, known casually as the zest, the pith, and the flesh (the part that we commonly eat). The pith is the thick white part between the zest and the flesh that most people find bitter, and which is left on when preparing candied orange peel.

Cook’s Illustrated breaks down the bitter pith misconception in this article, revealing the pith has no flavour. Or no flavour unless the pith and the zest rub together — as they will in your teeth as you eat the candied variety:

It happens when the pith and zest are abraded together, as they often are when preparing citrus-based drinks: Acid and enzymes convert the peel’s flavourless compounds into new ones with pronounced bitterness.

The traditional way to rid citrus peel of bitterness is to boil the heck out of it, dump it out, and boil it again. And then one more time. As with bitter greens, the boiling process releases the offending acids that reside in the peel, allowing them to be rinsed away.

It totally works, but it’s a time-consuming process, and all those wonderful aromatic oils in the zest go down the drain with the boiling water. I wanted a way to simplify the procedure and keep as much orange flavour around as possible — if not in the peel then at least in the remaining syrup (which you can save and use as simple syrup).

If the pith has no flavour and it only makes the peel bitter then I say take it off. What you lose in toothsomeness, you gain in time and aesthetic. The candying process requires 15 minutes of simmering instead of two hours and three repetitions of boiling and rinsing. Your kitchen won’t become a sauna, and instead of clumsy orange sticks, the result will be thin, dainty petals of citrus with curled edges. 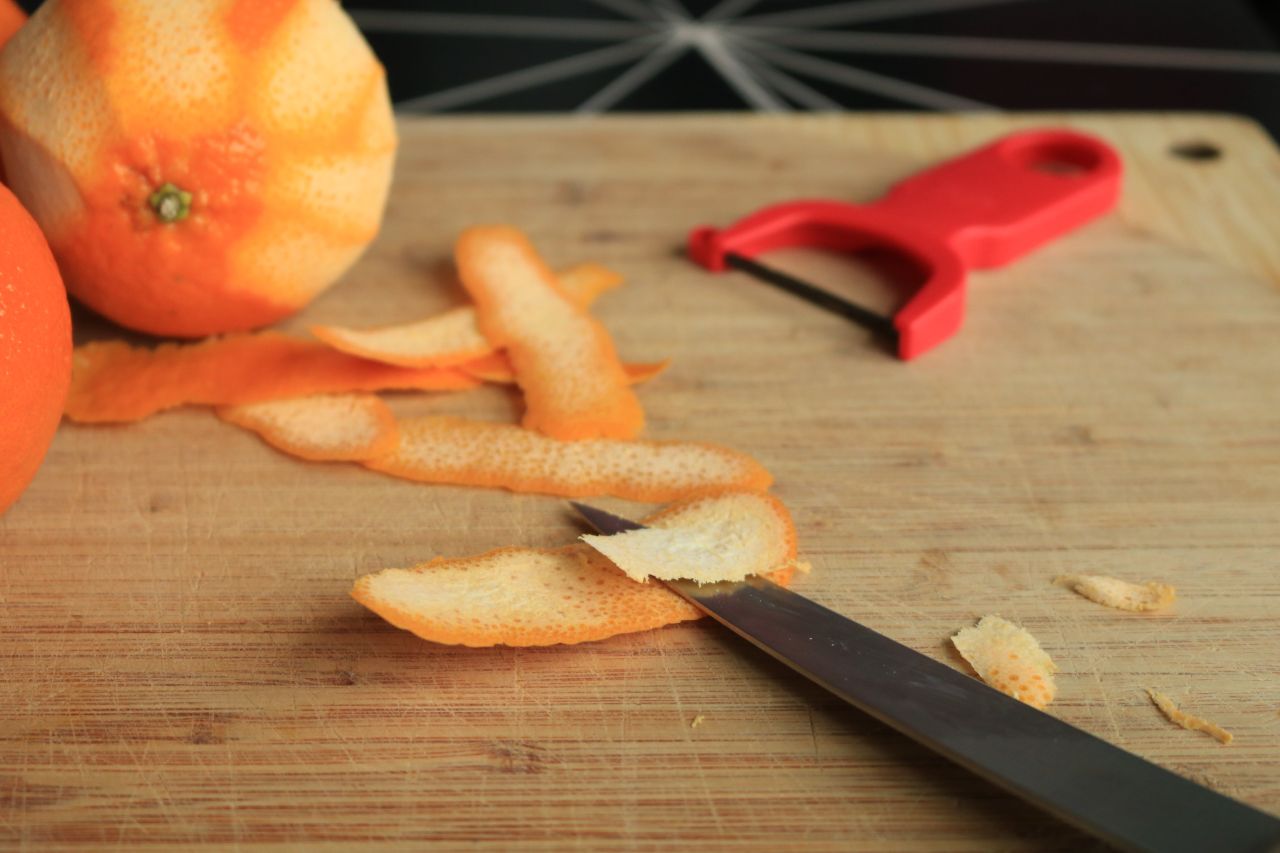 Make these quick candied strips by peeling the zest off of two oranges in the biggest planks you can manage (they’ll shrink). You can use a sharp paring knife, but a good vegetable peeler will make quicker work of this. If you get a bit of pith now, don’t worry; a shadow of white is fine. Once you have peeled both oranges, sort through to find the pieces with thicker patches of pith where the white is opaque. These need to be removed, but delicately. Run your knife along the underside of the rind to skin off most of the white layer, being careful not cut through the orange zest. Once you get very close to the zest, you’ll see the pith has small holes through which you can see the zest — that’s close enough. Thin layers of pith are nothing to agonize over, the idea is to take away most of it.

Pour one and a quarter cup of water and one cup of granulated white sugar into a tall-sided pot and add the orange strips. Stir the contents over medium heat to start dissolving the sugar and submerge the peels. Simmer for 10-15 minutes. You’ll notice the orange peels become translucent as the simple syrup begins to bubble and thicken slightly. Set a timer if you need to, as letting the peels go too long will cause all of the water to evaporate, leaving you with crunchy orange candy. 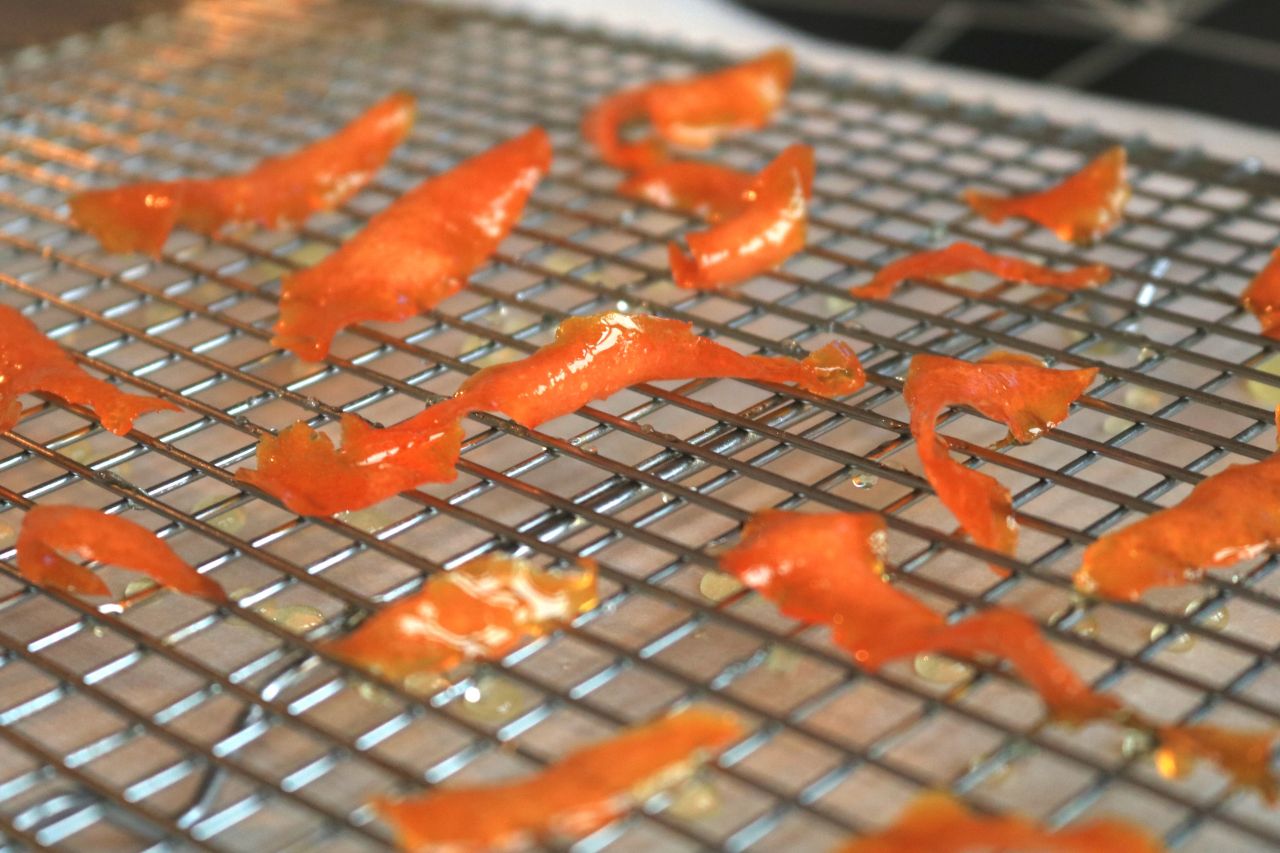 The many uses of candied citrus

But what to do with the resulting sweet treats? My favourite, and slightly more casual, choices include letting the candied peel cool in the syrup and storing the strips in a jar with the now orange-infused syrup for use in tea or as an ice cream or oatmeal topper, or chopping them up to add a chewy orange surprise to muffin batter.

Another option is to toss them in sugar to lend them a sophisticated, crunchy finish. While the citrus is boiling, lay down a sheet of parchment paper in a sheet pan and place a wire rack over it; this is where the strips will dry before you toss them in sugar. When the peels are finished boiling, remove each orange chip and, if there’s a curl to it, place it bowl-side down so it doesn’t retain a pool of syrup inside of it. Make sure the strips aren’t overlapping; each piece should have its own space. Leave them to set for two hours, or overnight if you have the time.

Once “dry,” you’ll notice they’re still a little tacky. That’s a good thing — you just don’t want them to be syrupy. Toss each strip in a small bowl of granulated sugar until all the tacky surface are coated and the candied orange peel is easy to handle. Store in an airtight container until needed. You can use these chewy ribbons as dramatic cake decorations or cocktail garnishes, or just boldly snack on them.