I’ve never played Dark Souls. I’ve never played Demon Souls. I played the first hour of Bloodborne, and it nearly broke me. You can imagine, then, just how overwhelming I’m finding Elden Ring. But, the things is, I’m having a blast — who knew you could have this much fun while failing?

As someone who tries to help people for a living, I’d like to share some advice for readers in the same monster-ravaged boat: New to soulslikes, wanting to find out what all the Elden Ring hype is about, but also very ungood at playing it. This won’t be a deep dive into every game mechanic; I’m still figuring it out myself, after all. The following is simply drawn from my own lived (and frequent death) experience so far — the things I wish I had known when I picked up the controller the first time.

You probably skipped the tutorial If you’re asking yourself, “wait, what tutorial?” congratulations, you skipped it. Towards the beginning of the game, you walked past a ghost dude in a chair near two paths. You could either head towards the glowing golden tree and the doorway beyond it, or jump off a cliff to your presumed demise.

If you, like me, didn’t take the leap, thinking “Ha! Not today, game! I’m smarter than that!” You’re not smarter than that. We’re both stupid idiots. Jumping off the edge here doesn’t kill you; rather the fall leads you into the only combat tutorial for the entire game.

this is probably the funniest level design of the year to me pic.twitter.com/HqZ9rAUarV

If you’re struggling with fighting even the simplest of enemies, go back and replay this tutorial. Seriously. It makes a world of difference, and you’ll walk away feeling at least a bit more confident in your abilities.

Take signs with a giant grain of salt Elden Ring, like other FromSoftware titles, is a multiplayer experience. You can summon other players to help you defeat a boss, and provide aid to other players (though I won’t be helping anyone myself, because I suck). Among other cooperatives tricks, one fun feature is the ability to leave signs around the game world, to help other players when they reach that area.

Be very sceptical of these signs.

However, sometimes they’re straight-up trolls. They’ll tell you to jump off the edge of a cliff, knowing full well the fall will kill you. Maybe they tell you to look left while walking down a tight corridor, only for the real threat to be on your right. You would think the fact that there’s open voting system on each sign that a high number of “appraisals” would indicate a helpful message, but it turns out voters like to mess with players as much as sign makers do.

The signs are worth reading, and worth considering, but don’t treat them as gospel. Remember: Some players, like 99% of Elden Ring’s NPCs, just want you to die.

If there’s a sea of blood in an empty area, run 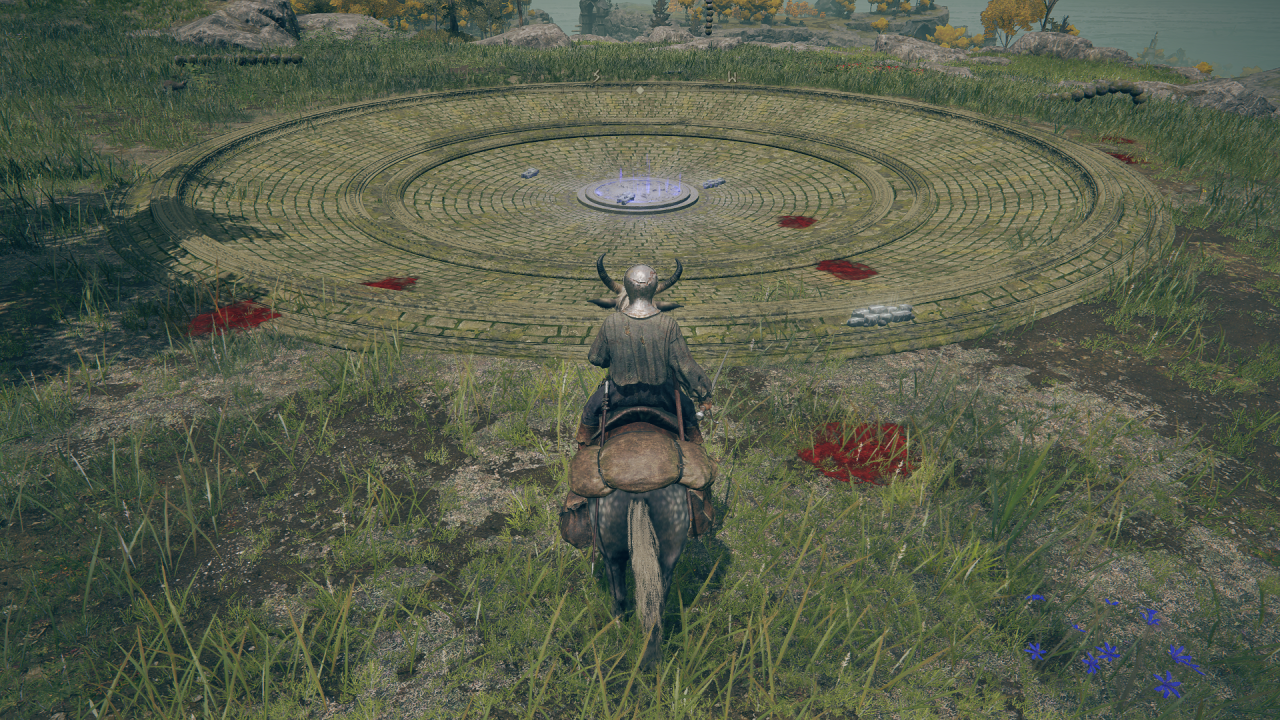 Ah, bloodstains. You might see these red pools peppering the ground on your journey. They’re another multiplayer feature, showing the spots where players before you have died. If you interact with the stain, you’ll see a short animation of how that player fell. You’ll often find them next to cliffs (one guess why), as well as in front of enemy boss areas. Makes sense.

However, if you ever see a sea of them in a seemingly empty area, run. GTFO as fast as you can. That’s your sign you’re about to walk into a death trap. An enemy unknown is lurking in the shadows, waiting to claim you as its next victim. Consider this: If in real life you turned the corner and saw an abundance of blood pooling on the ground, would you continue walking that way? Hell no. Treat Elden Ring’s bloodstains the same way.

If it’s bigger than you, leave it alone Like Breath of the Wild, Elden Ring has a great opening that introduces its vast open world, allowing you to choose your path forward. Right away, you might notice some big monsters walking around, leading you to the reasonable conclusion you’re able to take them on immediately. It’s the start of the game. Why would there be advanced enemies standing around if you weren’t supposed to face them?

This is a FromSoftware game, not a baby Nintendo romp. Get your head out of your arse. If you see an enemy bigger than you, go around it. Those things are dangerous. They’re huge, possess giant swords, and can cover more ground than you. You simply don’t have the stats to go up against them right now.

If you’re an expert player, I’m sure you could dodge their attacks and whittle down their HP over time. Are you such an expert? Why are you reading this? Go troll some newbs with funny signs.

Once you get a horse, you can run through just about anything If you follow the main path of the game for a bit, you eventually get access to your horse. Unlike the one in Zelda, Elden Ring’s horse will spawn underneath you whenever you want, allowing you to quickly switch between running and riding.

While your horse is certainly a more efficient way to get around the map, it also offers an advantage that might not be obvious at first: You can ride past almost anything. Accidentally encounter an enemy camp? Sprint through it on your horse. Did a Tree Sentinel mark you as its next meal? Ride like the wind, Bullseye. Your horse can even double jump for some reason.

The exception is those areas where the game forces you off your horse. These are usually boss fights, when the game wants you on two feet for the encounter. In those cases, you’re fucked. But if you play like I do, you’re mainly interested in exploring as much of the map as possible while getting into as few fights as you can. The horse empowers you to do that.

You’re going to lose runes, and there’s nothing you can do about it Runes are Elden Ring’s currency. You can use them to buy and upgrade weapons, but, more importantly, you rely on them to level up. As in outher soulslikes, when you die, you drop your runes, and you have to return to that exact spot to pick them up again. Oh, and if you die a second time before doing so, those runes are lost forever. Fun!

If you’re like me, your instinct will be to pick your lost runes up every time. And while it can be worth putting in the effort to go back for a large number of runes, you need to accept the fact that there will be times you will die before retrieving them.

The first time I lost a lot of cash was when I was attacked by an NPC invader, a real son of a bitch. He held my runes ransom; if I wanted them back, I had to find the spot where I died, retrieve them, then murder the guy right back in order to leave the area.

After failing many, many times at this task, I sought advice via a walkthrough. Turns out the guide recommends you don’t approach that particular enemy until you’re at least level 40. I was a level 14. Bye, runes.

Magic is your friend 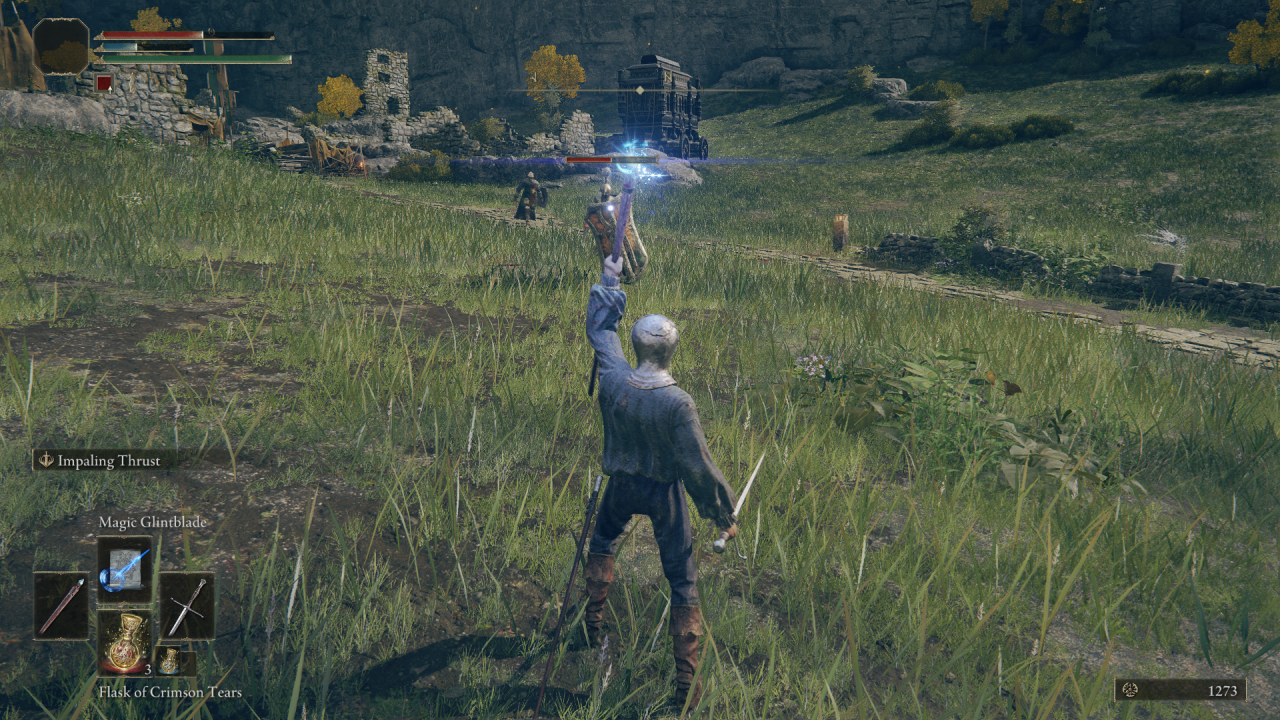 Magic in Elden Ring almost feels like cheating. Combat can be very challenging to poor players (me), but magic, with its longer-range and powerful attacks, can level the playing field a bit. At worst it will weaken enemies significantly; at best, it will kill them without you needing to engage in swordplay at all.

From what I can tell, two of the best classes to pick for magical prowess are Prisoner and Astrologer. However, if you don’t want to start the game over with one of those, focus on getting stronger in magic by levelling up your Mind and Intelligence stats. I’m still new to this mechanic, and haven’t had a chance yet to branch into new spells. But, until then, spamming my default cast has done wonders. Part of what makes Elden Ring and other soulslikes such intense experienced is the inability to pause them. When you activate the menu to check out your inventory or pull out the map to examine your position, the world keeps moving around you, leaving you wildly vulnerable. However, as it turns out, there is a way to pause the game so you can actually go do something else (pee) without feeling like your character will be a puddle of gore when you return.

Our good friends at Kotaku highlighted this feature, illustrated in a tweet from user Iron Pineapple:

guess what, Elden Ring DOES have a pause button

just open "Menu Explanation" while on the inventory screen

this isn't a meme, it actually works lmao pic.twitter.com/0tNLFaWwC7

Sure, it’s not the same as quickly pressing Start and having everything come to a halt, but it’s something. Happy pausing, friends. Beyond the complaints, frustrations, and cries into the void, you need to know the game gets easier. Eventually. It’s overwhelming to jump into a FromSoftware game with no experience before, sure. I still have no idea what I’m doing.

The difference with Elden Ring is that you can take your time to find your place in its giant open world. I suck at this game (most games, really), but after a while, I started to get a hang of the combat, which meant I could kill smaller enemies more easily. The runes from those small victories add up, and, after a while, I leveled up to the point that bigger enemies don’t always offer the instant deaths they once did. (Sometimes.)

I’m now able to take on low-tier baddies with relative competency, and tackle the odd oversized monster every now and then. It’s a good place to be, and I assume things will only continue to improve. Unless they don’t; again, I’m not great at this game, but I’m having fun.