We Love the Dongle, Don’t We Folks? The Best USB-C Hubs to Get Your Laptop Back to the Basics

Before it was cool, Apple introduced its first USB Type-C-only MacBook back in 2015, namely, the 12-inch MacBook. Though inevitably discontinued, one could speculate due to its exorbitant price tag, this thin and light machine unexpectedly influenced every laptop Apple’s slapped its logo on since. These days, however, it’s not only MacBooks foregoing all your favourite ports and slots — HDMI, microSD, SD, and the like; in fact, you’ll find many of the best laptops now require multiport adapters and hubs to do simple things like extending your screen to a second display, viewing photos from your digital camera, or even just plugging in a webcam for your Zoom calls.

I’m writing this guide, in part because I feel responsible for the burden I’ve put on laptop users of all stripes. You see, a few years ago when I was working as a freelance editor for TechRadar, I took it upon myself to try and get a headstart on the rest of the tech industry by prematurely tossing out my old cables and accessories in favour of their USB-C equivalents. The end result was comical inconvenience. Here I was, USB-C to DisplayPort cable in tow, with no second port to charge my laptop at the same time. A goddamn fool I was. Still, the real second port was the friends we made along the way, and I made plenty.

As much a veteran as anyone can be in the 5 years since USB-C entered the public consciousness, I’ve put my endless supply of multiport hubs sent to me after I started writing op-eds like this through the ringer. Here are the best of the bunch, based on years of suffering. 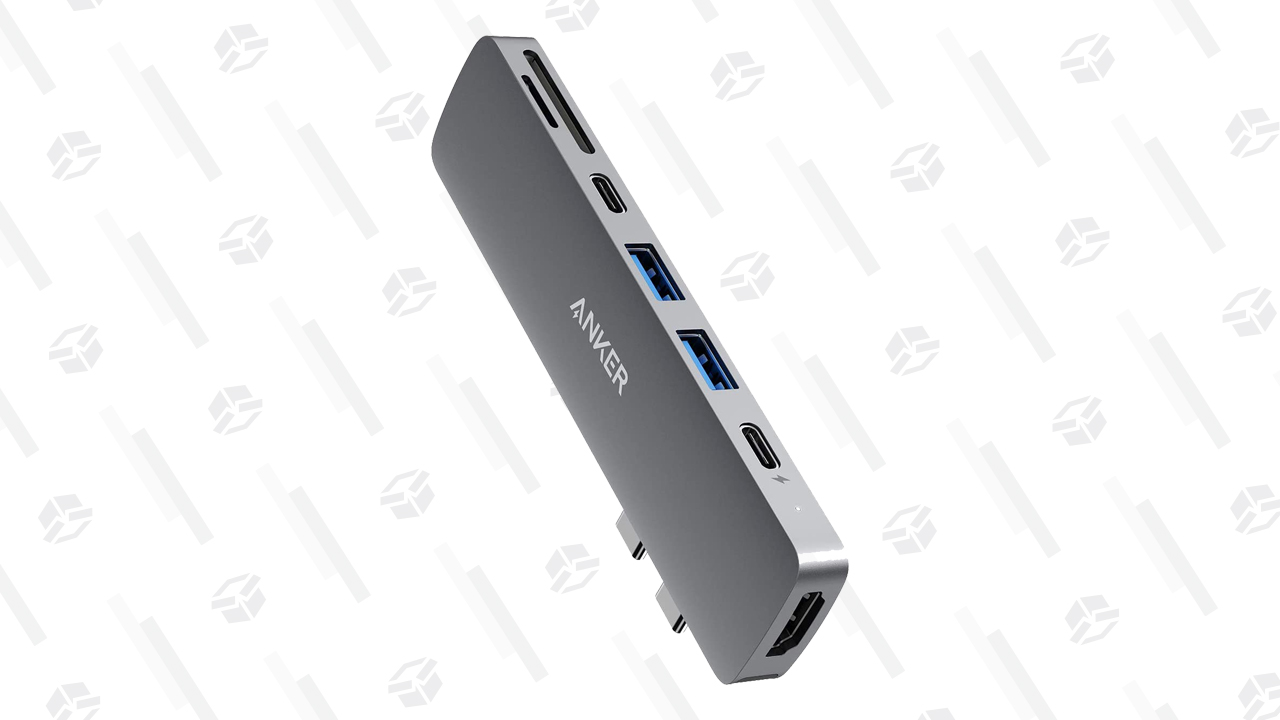 After an older version of a similar hub I’ve had for years started falling apart, I searched high and low for a replacement multiport adaptor to camouflage itself on the side of my 16″ MacBook Pro. As soon as I found the Anker PowerExpand Direct, I reached out to my contacts at Anker for a review unit, and I have to say it’s every bit as perfect as I’d hoped. Complete with HDMI-out, two USB-A ports, a microSD card slot, a full-size SD slot, and not one but TWO USB-C ports (hence the 7-in-2 moniker) — including one for 100W charging and another for data transfers — the PowerExpand Direct pretty much has it all.

Well, sort of. The one downside is that, despite having two USB-C ports, you also have to plug it into two USB-C ports on your computer, which defeats the purpose if you’re hanging onto a MacBook Air or even a base model 13″ MacBook Pro. That said, according to a forum post over at Super User, “one-too-many” USB-C hubs as they call it are hard to come by for a reason. Until recently, the chips for these hubs were not available to OEMs, and the few companies who’ve managed to get their multi-USB-C hubs out on the market have effectively nerfed the interface to the older USB 2.0 spec. For someone like me, though, with enough USB-C ports for days, it doesn’t get better than this. 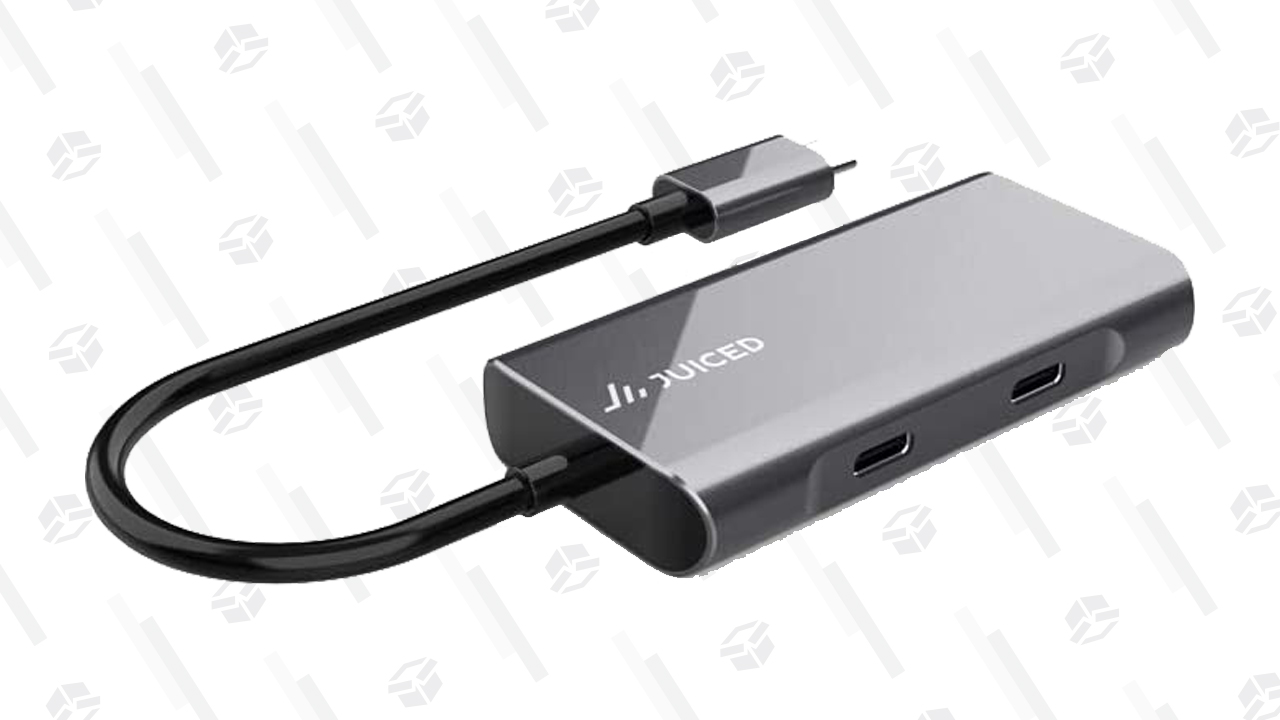 Now here’s one I haven’t used, but since the Belkin I was going to recommend seems to be discontinued, the Juiced Systems QuadHub might be your best bet for those craving an extra dose of Vitamin Type-C. Touting a couple of USB Type-A 3.2 Gen 2 twins and two USB Type-C 3.2 Gen 2 ports, while this one isn’t the most versatile hub you’ll find, it is ostensibly one of the only USB 3.2 hubs you’ll find on Amazon, at least according to one enthusiastic reviewer:

There are plenty of hubs with the run-of-the-mill 3.0 connections in both [Type-A] and [Type-C], but since I spent a lot of money on my laptop I wanted to make sure I took advantage of the higher speed offered by USB 3.2. So my search finally led me here to the Juiced Systems Quad Hub with two each, [Type-A] and [Type-C] USB 3.2 connections. I tested the ports with both types of connectors and they work fine. – Jose Hernandez

For those aforementioned MacBook Air or 13″ Pro users looking to add an extra high-speed reversible port to their artillery, the QuadHub is one of a kind, literally. 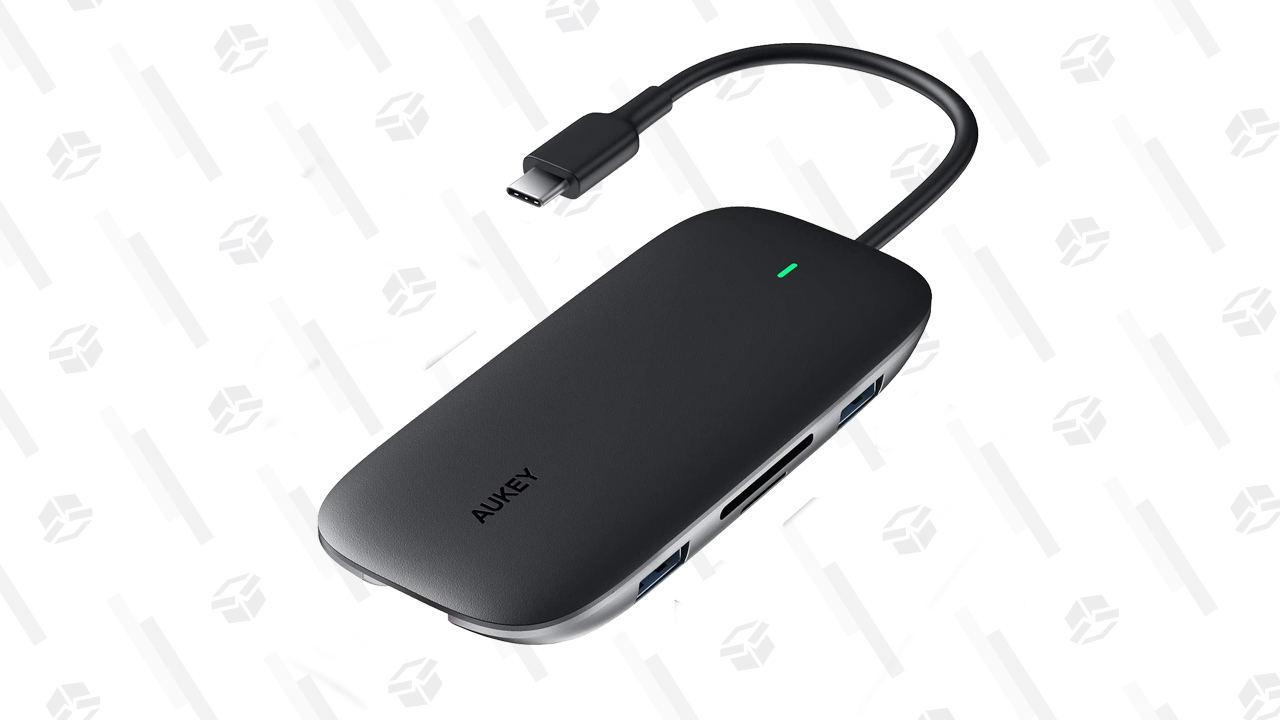 For our MacBook professional friends, data transfer capabilities alone won’t cut it. You also need ample connection options and, most importantly, 100-watt Power Delivery to satiate your MacBook’s hunger. The Aukey CB-C71 Link PD Pro may not go hog wild with the ports like its 12-in-1 cousin, but at around half the price, it won’t hurt your wallet either. Unlike the QuadHub, the Link PD Pro boasts USB 3.0 speeds, laying claim to a 5Gbps peak data transfer rate. With it, you’ll get a pair of USB 3.1 Gen 1 ports, both SD and microSD card slots, and as an added bonus, a Gigabit Ethernet ports for wired internet connectivity.

Like the Anker PowerExpand Direct, it does have HDMI-out, but it’s worth noting it can only push 4K video at up to 30Hz. Anyone who prefers to move their cursor at 60 frames per second (i.e., everyone) will be left disappointed by this restriction. To solve this problem, and assuming you have the extra port to spare, I bought this USB-C to DisplayPort cable YEARS ago and still can’t live without it.

With the Aukey Link PD Pro and its enclosed carrying pouch in tow, you’re free to multitask without running out of juice, whether you’re rocking the cheapest 13″ MacBook Pro or its beefy 16″ brethren. 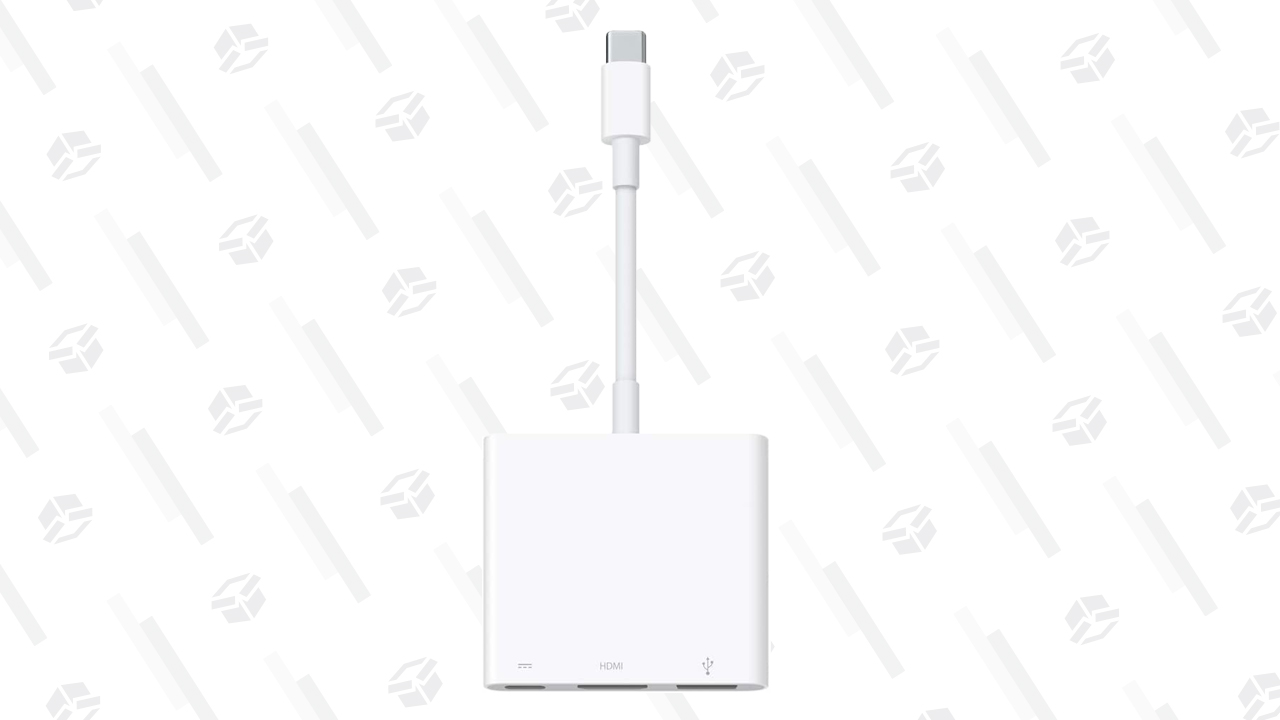 Because I’m a sicko, I’m probably one of the only freaks using Apple’s own USB-C dongle in conjunction with a third-party adaptor. Contrary to popular belief, there’s something to be said for the look and feel of an official Apple accessory, not to mention the quality: I’ve been hanging onto this one longer than anything else I’ve used, since the first MacBook I bought more than half a decade ago, and it’s still going strong.

As you’ve probably guessed, either from the above image or common knowledge, the Apple USB-C digital AV multiport adaptor is basic as fuck, bearing a mere trio of connections: a USB-C port you can only use for charging (not for transferring data), HDMI-out (I’ve already touched on why this isn’t ideal), and a single USB 3.0 Type-A port. All this for $99! If you’d rather trade up HDMI for an even lower 1080p resolution ceiling, you’re in luck — Apple sells a near-identical VGA multiport cable for the same price.

Despite its flaws, and its highway robbery sticker price, the Apple USB-C remains my go-to for travel. At one time, I’m pretty sure it didn’t cost much more than your average OEM hub, but that’s changed of course as USB-C has become more ubiquitous. Buy this one when it’s on sale. 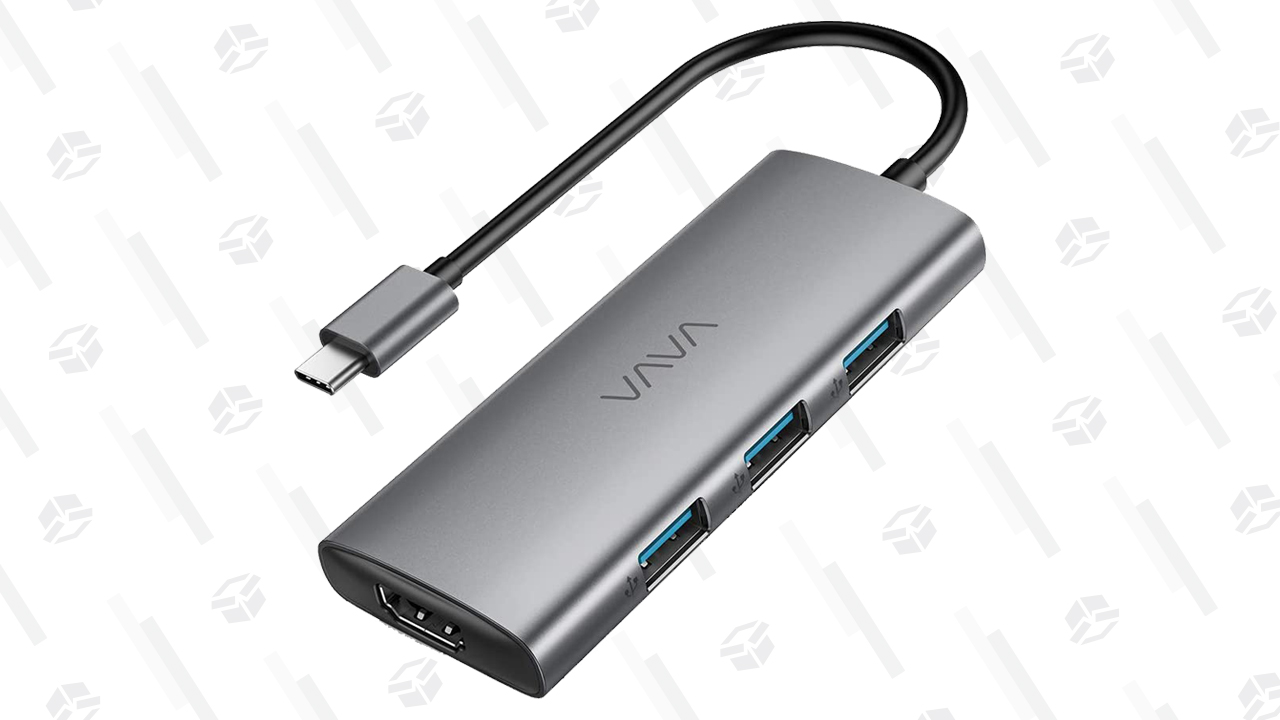 The most recent hub I’m using with my current setup, this Vava 7-in-1 USB-C adaptor has roughly 2.3 times the functionality of the Apple multiport plug for about $50. Yielding the same 100-watt Power Delivery as the more expensive Anker PowerExpand Direct and Link PD Pro options, the device formally known as VA-UC017 brings three USB 3.0 ports (w/ speeds up to 5Gbps), SD, microSD, and HDMI.

Other than the cable, which is a bit longer than the official MacBook cord at 7.1 inches vs. Apple’s ~4″ , Vava’s budget option is virtually indistinguishable from its competitors. If you think about it, though, isn’t that exactly what you want from an economical pick?

Welcome to The Inventory, consumer product curation from the team that brings you @KinjaDeals. Learn more here: https://t.co/m4SpYnTRDt pic.twitter.com/trEYzuzbd7