Chucking a sickie is something most Australians have done at least once in their life. Who wants to be stuck in a boring old office when you could be lounging around in the comfort of your own home? To combat this unscrupulous behaviour, some workplaces now require a doctor’s note. But this deterrent isn’t as effective as you might think.

Legitimate sick days are important. You need time off when you’re ill, and you don’t want to infectyour co-workers. And while it’s definitely an issue for business – from a cost and corporate culture perspective — taking one when you’re not actually suffering from some form of sickness isn’t exactly the worst thing in the world.

But it does appear it’s stunningly easy to get an official get-out-of-work card from medical centres in the Sydney CBD, even if you admit you’re not really sick. (Which could be a good, or a bad thing depending on who you are.)

To investigate this we visited three randomly-selected doctors in Sydney city, and (as a full-fee paying customer) asked for a doctor’s certificate, after this reporter admitted he was definitely not actually ill, and basically, just wanted to go home for a day off.

The reaction from each of the doctors we visited varied, but all of them supplied an official sick note. Here’s what we found: 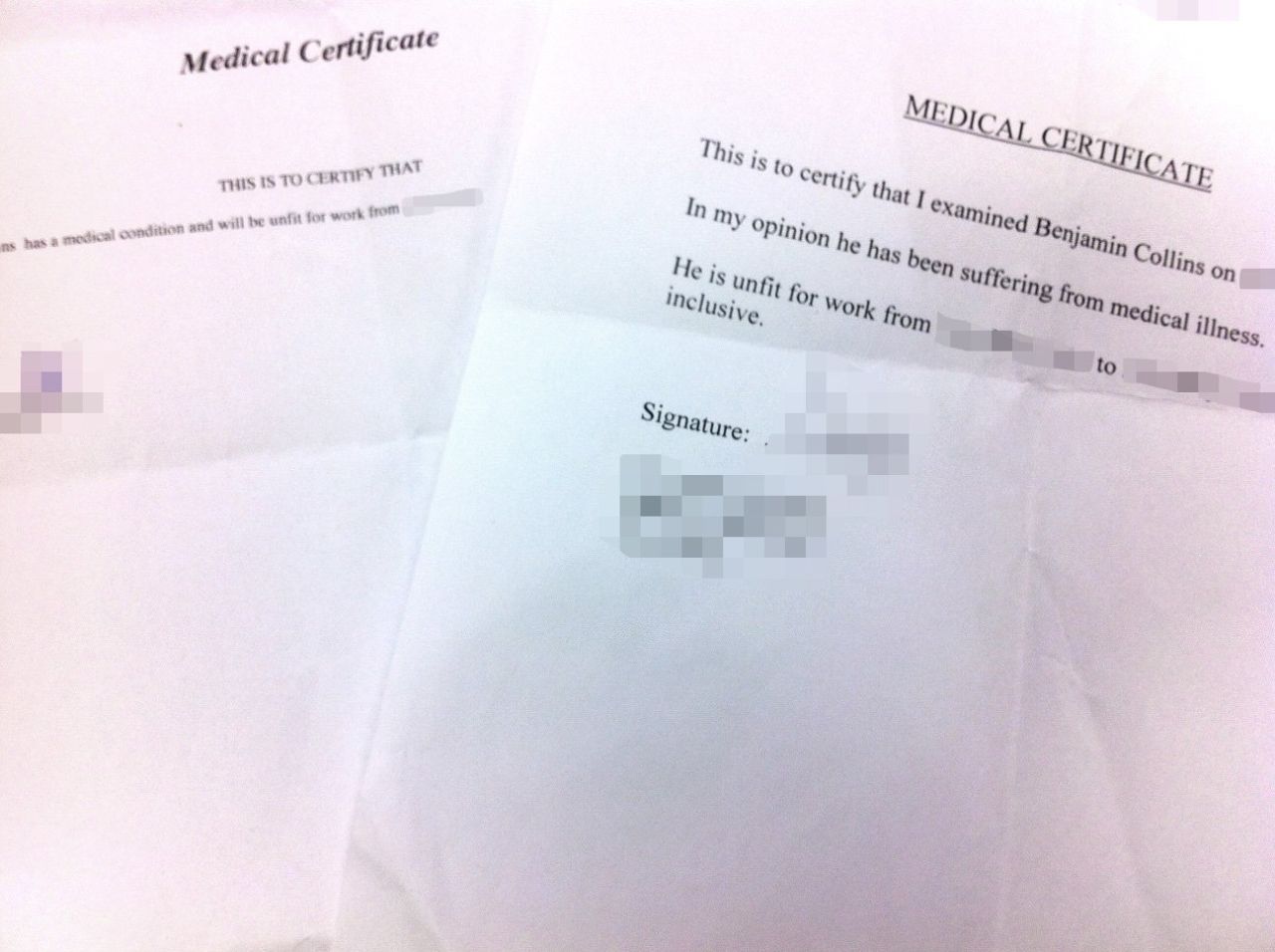 This particular doctor did not perform any medical examination. In what was an in-and-out consultation, they remarked “enjoy your day off” as the desktop printer spun out the sick note. This was after — very clearly — being told, “I’m not actually sick,” and “it’s just one of those days, I just want to go home.”

That was all they were told. There was no dancing around the topic, and the doctor seemed happy enough to supply one, even if it was going to be used for a bit of R&R, spent in good health.

A few more questions this time, but again, not exactly a hard sell to get the certificate.

This doctor explained — after hearing their patient was “not really sick,” that: “that’s not how this works.”

They then said I needed to at least provide a list of symptoms. “You’ve got to tell me a story,” the doctor said. The doctor would then decide if I was telling the truth.

“Can I say I have a cold?” this doctor was asked, to which they replied “sure,” and “so you have a runny nose,” before taking a temperature reading which gave no sign of illness, and, looking unhappy about it, printed a certificate anyway.

This was the hardest of the three, but still resulted in getting the official note of ill-health.

This doctor conducted a thorough examination — questions on family health, allergies, and how many standard drinks are consumed per week — as well as a blood pressure test.

After this, stressing that sick notes are not given to people who are not ill, they asked about mental illnesses. “Are you depressed?” the doctor asked. There were also questions about a possible case of fatigue.

They also asked if it had been “a big weekend”.

Despite the answer to all of the above being a “no”, the certificate was printed. This consultation took a lot longer than the previous two, and it’s very possible the doctor decided I was, in fact, suffering from some form of mental illness.

Keep in mind, most workers after a sick note generally at least make up an illness, rather than — repeatedly — saying they were definitely not feeling sick.

While the object of this was to demonstrate how easy it was to get officially-approved sick leave without having any actual illness, there are times that people will visit doctors’ surgeries appearing to have nothing wrong with them but genuinely needing time off because of a more serious underlying condition such as depression.

Mental illness is as valid an affliction as anything physical, and something workplaces — as well as those suffering — should take just as seriously.

Depression is the leading cause of disability worldwide, according to the organisation. In Australia, it is estimated that 45% of people will experience a mental health condition in their lifetime.

Around 1 million Australian adults have depression, and over 2 million have anxiety in any one year, according to its website.

“The importance of seeking help early can not be overestimated,” Carnell said, adding it was something managers need to treat just as seriously as a cold, flu, physical injury or disease that was keeping their employees from work.

There has in the past also been a stigma, the idea that you should “pull up your socks and get on with it”, attached to workplace mental illness.

“Understanding what a psychologically safe workplace is, is a responsibility of leaders,” Carnell said.

Australian Medical Association president Dr Steve Hambleton told Business Insider it was not doctors’ jobs to police their patients, and they had the right to take them at their word if they say they are ill.

He also said though, while he thought it was an isolated issue, no doctor should issue a certificate if they could not diagnose a legitimate illness.

“But a doctor is entitled to trust what a patient is saying,” he explained.

There are bigger issues for Australian business than staff taking fake sick days – the high Australian dollar, a slowdown in growth in China, industrial relations laws and tax changes, as well as a host of other headwinds that will probably take up a lot more space in executives’ minds than their staff chucking the odd sickie.

And research has shown it could be even less of an issue than they think it is.

In 2012 a study by absence management firm Direct Health Solutions found bosses think non-genuine sick days account for up to 25 per cent of absenteeism, when they actually account for less than 15 per cent.

That same study found sick days cost the economy about $28 billion a year.

Anyone can call Beyond Blue with any questions about depression or anxiety on 1300 22 4636.