Microsoft has promised that their next console, Scorpio, will be "the most powerful console ever," and today the company delivered on that promise, revealing a set of beefy specs that, in terms of raw power, surpass any video game console on the market today.

In a PR reveal with Eurogamer's Digital Foundry, Microsoft revealed that Scorpio will include a custom CPU, 12GB of GDDR5 RAM, and, well, I'll let their chart explain: 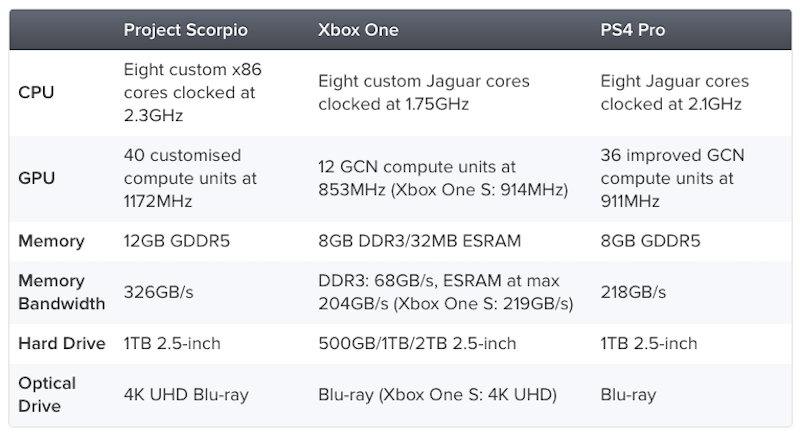 Digital Foundry's hype is breathless — "Nor can the number of compute units and teraflops represent the passion the Xbox team has injected into this project" — but in short, their technical wizards say it's more powerful than any video game box we've seen, capable of running a Forza tech demo at 60 frames-per-second and 4K resolution. Whereas the PS4 Pro was an iteration, Scorpio appears more like a new console generation.

This will no doubt impress gamers who obsess over CPU speeds and graphical fidelity, although Microsoft has a tough road ahead of them when it comes to regaining their footing in the console market.

Since this generation started, Sony's PlayStation 4 has dominated Microsoft's Xbox One both in sales and software. Microsoft has struggled to compete with Sony's first-party offerings and Japan-developed games, many of which are exclusive to PlayStation. Microsoft has canceled several of their highest-profile titles, like Scalebound and Fable Legends, which was a disappointment to Xbox faithful.

For Scorpio to truly compete, Microsoft will need to ensure that it has a lineup of games as impressive as the PlayStation 4's. Microsoft has said that Scorpio will be out this fall. There's no word on a price yet.

This story originally appeared on Kotaku

The Ten Most Popular Dogs [Infographic]