Why Is It So Bloody Hard To Build Humanlike Robots?

One day, a robot might save your life. But first it needs to work out how to open a door unassisted. The DARPA Robotics Challenge was created in response to the Fukushima Dai-ichi nuclear disaster and while results were decidedly mixed, the event provided a fascinating insight into the nuts-and-bolts of robotic engineering.

During the DARPA Robotics Challenge in California, more than 20 teams from around the world built, programmed and controlled a robot through a series of eight tasks in a simulated disaster zone.

The challenge required the robots to drive a car, open a door, cut a hole in a wall, traverse some rubble and climb some stairs, all in under an hour. The aim was to spur the development of robots that could perform search-and-rescue missions in locations too dangerous for humans to enter.

A team from the Korean university KAIST won the challenge by completing all the tasks in under 45 minutes. While the competition demonstrated what robotics can now do, it also showed just how challenging it is to build a machine that performs what are relatively simple tasks in human terms.

In robotics, there are two types of control. First there is the “low-level” control needed to coordinate the actions of motors. For example, the speed of wheels or the movement of a joint. Then there is the “high-level” control needed to carry out specific goals using the whole system. For example, picking something up then carrying it to a target.

The ideal outcome of the DARPA challenge would have been a robot that could complete the challenge autonomously, without any human control. In fact, all of the high-level control was performed by human operators (via remote control). Some of the lower-level control was also done in this way, including, in some cases, deciding where the robot should place its feet when walking.

The reason high-level autonomy was not more prominent in the competition was the incredible difficulty of creating and operating the hardware needed to perform the tasks. Most teams chose robots with a human-like body shape – although the winner extended human capabilities with wheeled knees and rotating waist – even though the rules didn’t limit them in this way. In order for a humanoid robot to perform an action with one part of its body, the rest of its body must also be coordinated to counteract the forces involved.

For example, for a robot to push a power tool through a wall it must generate enough force to push while also altering its balance to prevent itself from falling over due to the recoil. This kind of coordination happens in a very high-dimensional space, meaning parts have to moved in many different directions. Humanoid robots may have more than 30 joints that can be moved simultaneously, a complexity that is very hard to model computationally.

This difficulty meant that the majority of effort in the DARPA challenge went towards low-level control algorithms. Although this may be disappointing to those interested in fully autonomous robots, developing low-level control was actually one of the main intentions of the competition. Robust high-level autonomy can only be created once the lower-level systems are robust and reliable. 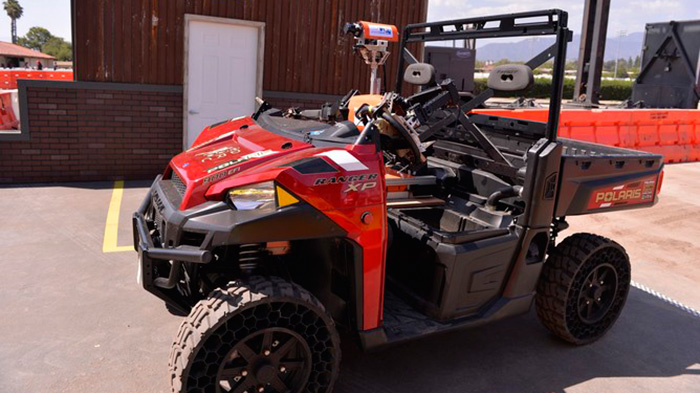 The difference is striking if you compare DARPA’s Robotics Challenge to its Urban Challenge, in which teams competed to deliver self-driving cars. In this competition, the physical engineering tasks were mature and well-understood – we’ve been building working cars for more than 100 years. The result was a highly impressive display of autonomy as the engineers were able to concentrate on high-level control software.

The Robotics Challenge should be seen as just the beginning. As the physical bodies and low-level control software of humanoid robots improve, scientists at the interface of artificial intelligence and robotics can start to create the first complex autonomous behaviours for large-scale humanoids. So, when the next competition happens, we may see these fantastic machines thinking for themselves a little more.

Nick Hawes is Senior Lecturer in Intelligent Robotics at University of Birmingham.