How To Survive A Long-Haul Flight With Finesse

I think it’s safe to say that few people enjoy long-haul flights. But here’s how to safely survive a couple of days trapped in an aluminium canister with your sanity intact.

Some flights pass by in the blink of an eye; some drag on forever. The good news is that some flights are better than others and there are things that will help mitigate the journey along the way. Don’t also underestimate the power of dread; long-haul flights are intimidating if you travel infrequently, but it’s not near as bad as you think it is after the hundredth time.

I’ve definitely flown my fair share, including some rough routes. The worst flight I’ve ever endured involved a 12-hour flight from Hong Kong to Istanbul, followed by another 13-hour flight from Istanbul to Los Angeles. Instead of traditionally flying over the Pacific, I basically flew in the other direction. The layover was eight hours long. (It was cheap and it was for the holidays, what can I say?)

It should be noted that this advice mostly applies to people who are flying international long-haul flights in economy class. If you’re in business class, you might want to take your glass of wine and hang out on a different part of this site.

Like on any flight, a good seat is paramount. On a transcontinental or transoceanic flight, though, trust me, you want an aisle seat. No matter how much you hate it, there is no way anyone can avoid the aeroplane bathroom over a 12-hour period.

If you’re sitting in an aeroplane that has a three-row configuration — where there is a section of seats on the left side of the plane, followed by a middle section, and section on the right side — you should opt for one of the aisle seats in the middle section in particular. Though it may not seem obvious, this seat has several advantages.

Most importantly, it gives you easy access to the aisle and bathroom while also giving the people sitting in the middle seats two options to get to the aisle. This should automatically reduce your chances of getting climbed over (or having to politely exit your seat so others can get out) by 50 per cent or somewhat significantly. The aisle seats toward the left and right section of the plane don’t have this advantage. 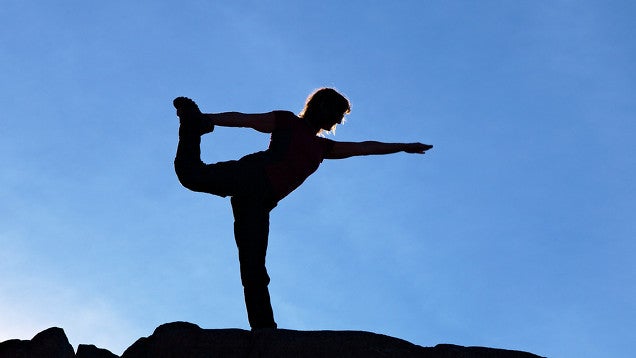 It’s actually quite important to keep the blood flowing while you’re sitting down for ages. Though it’s not happened to me personally, AllThingsD’s Kara Swisher suffered a transient ischemic attack, or a “mini stroke,” on a plane en route to Hong Kong a couple of years ago when blood temporarily stopped flowing to her brain.

For those concerned, many carriers are pretty good at demonstrating in-flight exercises in their safety videos. (CNN also has an instructional airline yoga article, who knew?) I always use bathroom breaks as a periodic opportunity to stretch my legs and either hang out in the back of the galley, at least for a few minutes, or walk down the aisle once or twice. 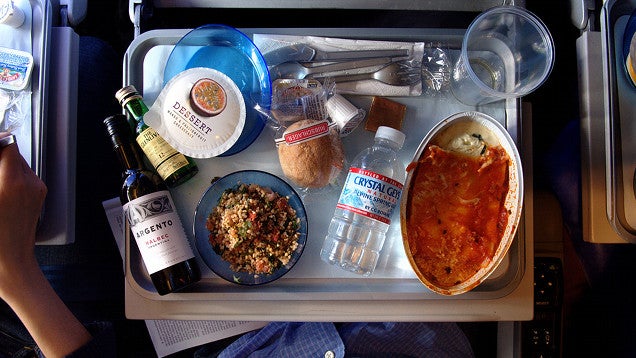 In the days leading up to the flight, I would stick to fairly light and healthy meals. There’s nothing worse than sitting with a Mexican burrito like a stone in your stomach when you’re trapped in an aluminised tube of claustrophobia. When you combine this with large periods of no movement, you’re going to feel pretty gross.

Though some people suggest skipping the meal service to combat jet lag, this depends on your own personal discipline. (I have a particularly strong sense of smell and the olfactory cues kick in my hunger pangs. Even watching The Food Network is sometimes a form of masochism.) Airlines actually tend to serve more correct portions — think Asian and European sizes — so I just generally take whatever the flight attendant puts in front of me. However, if that’s not going to be enough, pack something that’s easy to snack on.

During the meal service is when the aisle seat particularly comes into handy. Once the food is served and half of the plane begins to digest their food, you can be sure that the bathroom is going to be pretty popular soon. Don’t forget the fact you’re most likely on a pretty big-arse plane, which means there are lots of people on board. If you wait too long to do your business, you run the risk of being uncomfortable in your seat while everyone uses the loo.

In fact, there is an opportune time to go. There should be a fairly short window when the flight attendants have served the food and are no longing blocking the path to the bathroom just right before the meal trays are collected. Now, for some reason, people like to wait until the trays are collected before getting up from your seat. This is actually your golden opportunity, should you choose to take it.

Though it’s annoying to hold up your tray table and set it back down to get to the aisle, it’s going to be a lot more annoying waiting for six people to finish using the bathroom. Going to the bathroom during this in-between time ensures you won’t have to wait later, and even better, it means that you still have a relatively clean bathroom before everyone else has used it. This is especially true if this just happens to occur after the first meal service. 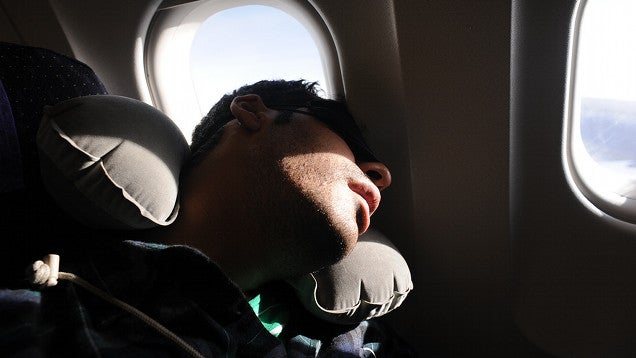 Especially because international flights usually serve free booze, people often resort to alcohol to help them sleep. Unfortunately, not only is alcohol a depressant, it’s also a dehydrating agent, so I actually generally discourage drinking on the plane. When you combine this with the pressurised cabin of an aeroplane, its effects can be amplified. I also can personally tell you this as someone who once fainted in the middle of an aisle during a 9-hour flight from Singapore to Australia.

In terms of tangible objects, investing in a cheap eye mask and earplugs work magic, and I do mean *magic* in terms of improving the quality of your sleep and regulating your circadian rhythm by limiting light. Travel pillows do considerably less in comparison; pillows are one of those things where you’re better off using the complimentary one onboard. Not only are most airline pillows sufficient, you’ll also have one less thing to carry on the plane with you.

Getting to actual sleep is a far trickier business. Some people swear by complete sleep deprivation; I prefer to do things a little bit less drastically, especially if you have to work in the days preceding the trip. That said, shortening your normal sleep by a few hours does help. (Last-minute packing does wonders!) It’s not necessary, however, to feel like you need to get on the time zone of your destination immediately. This will either occur eventually or not at all.

In frequent traveller circles, some people like to cite melatonin as one of the more natural remedies for visiting the Sandman. The truth is, though, this is really dependent on how your body reacts to it like any other drug. While I’ve had poor results, I know others who swear by it. I would prefer melatonin if it actually worked for me, but the alternative is using more traditional over-the-counter sleeping aids.

Unfortunately, there is a small segment of the population that just won’t be able to sleep on a plane, no matter what they do. This does happen to me from time to time, and I can tell you that it’s anything but fun. Torture is staring at the plane’s current route on the in-flight entertainment system in pure silence. 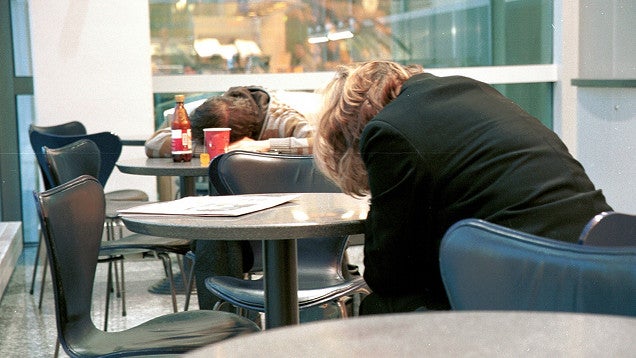 Everything starts from the minute you book the flight. If it’s inevitable that you’re going to have a flight with a connection, try booking the connection at the end. Nothing is more draining than beginning a 12-hour flight after you’ve spent three or five hours flying across the country just to get to the hardest portion of it. This may or may not be possible depending on where you live — travellers that live in major hub cities often have the most choices.

If you’re fortunate enough to be able to reverse the connection so it happens at the end, this puts the hardest part, the long-haul portion, upfront. Not only will you have more energy to deal with the most taxing part of the flight, but by the time you make the connection, you’ll be exhausted. It sounds counterintuitive, but it’s actually not: by the time you reach the connection, you’ll end up sleeping through most if not the entire second leg. Most of the time, I end up passing the time in a wonderful, pure state of black unconsciousness.

The main thing I look at, besides connection points and costs, when booking flights more than anything else is the arrival time. One of the most important factors in beating jet lag has to do with remembering that it’s a lot easier to go to bed later than to wake up earlier. Keeping this in mind, flights that have a late afternoon or nighttime arrival are preferred. If you arrive earlier, all it means is that you’ll have to stay up a whole lot longer. (The key is to keep moving when you arrive until you have to go to bed; once you start resting, it’s game over.)

To get a good idea of when I should be sleeping on the plane, I usually immediately change the time settings to my destination on my phone once the aircraft is en route. Though it’s pretty tempting to pass the whole flight in a complete state of unconsciousness, sleeping the entire time can mess up your internal clock just as much.

The cabin crew is pretty good at giving visual cues during a flight; for instance, they will dim the cabin lights when it’s a good time to rest or turn them completely on and be in-your-face during specific intervals. The point is to not be deterred if you can’t sync your body exactly, but to sleep proportionately when you need to. Even if the best you can do is to flip flop the waking and sleeping portions of the flight, it will still help overcome serious jet lag.

If you’re on a long-haul flight, the chances are pretty high that we’re looking at a minimum time zone shift of six to twelve hours (unless you’re travelling north-to-south or south-to-north). If I sleep for half or up to three-quarters of the flight to anticipate an approximately 12-hour time zone change, I consider that a job well done. I find 6-hour time zone changes — give or take a few hours — are the hardest to acclimate to. If you’re flying east to Europe from the U.S. East Coast, you’ll run into these.

The thing about most of these tips is that what may work for another person may be completely different, but like anything, it’s only over time and with lots of practice does someone get used to flying long distance. Still, many of the strategies I mentioned can cut down significantly on the stress of flying. The important thing to remember is that, thankfully, the flight does eventually end.

How To Survive a Long-Haul Flight With Finesse [Map Happy]

Erica Ho is the founder and editor of Map Happy. When she’s not writing about travel, well, she’s just planning her next trip.