One thing all future predictions have in common: they‘re rooted in our current understanding of how the world works. It‘s difficult to escape that mindset. We have no idea how technology will evolve, so our ideas are connected to the technology of today. 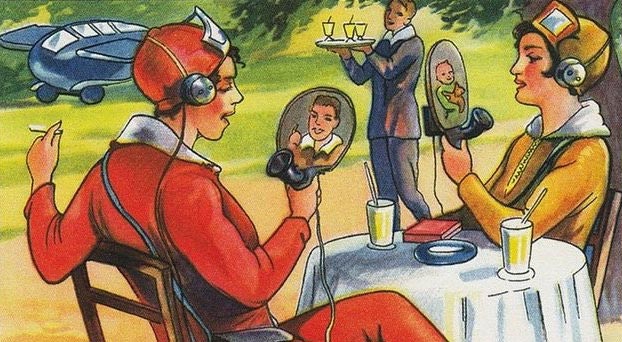 That‘s why 80s Sci-Fi depicts a future where we still use CRT monitors and green screen computers. That‘s why 50s Sci-Fi didn‘t feature computers at all. 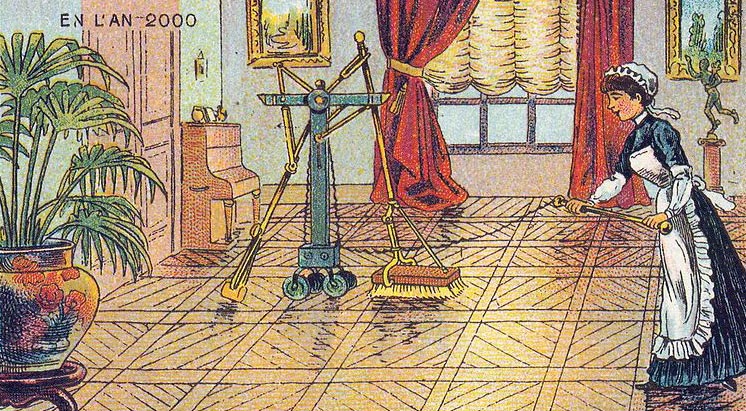 Even when we‘re doing our level best to predict the future, we‘re really reflecting the hopes and aspirations of the world we currently live in. Predictions for the future inevitably become historical documents that – ironically – tell us more about the past than the future.

So we thought we‘d do something a little different. In collaboration with Marvel Studios we asked a number of local concept artists – who‘ve worked on some of Australia‘s most successful video games – to come up with a vision of the future inspired by Marvel Studios‘ Black Panther and, more specifically, Wakanda.

In Marvel Studios‘ Black Panther Wakanda is a fictional African country. Wakanda is home to the resource Vibranium (the metal Captain America‘s shield is made of) which arrives via meteorite crash and helps Wakanda to become the most technologically advance country in the world. Wakanda is isolated, it develops independent of the world. Its technology is advanced in unique ways.

We asked each artist one single question: imagine today a Vibranium meteorite landed in Australia. What would our major cities look like a generation from now? How would Australia evolve? 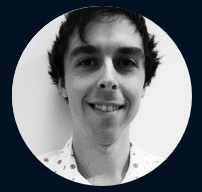 Lachlan Page is a freelance 3d artist and concept designer from Melbourne, Australia. He began working on fantasy and science fiction projects in 2016, and hopes to continue to do so far into the foreseeable future. 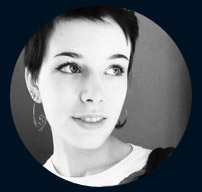 Teja Mae Godson is a digital artist based in Sydney. She most recently worked on RUMU for Robot House. Is powered by carbs. 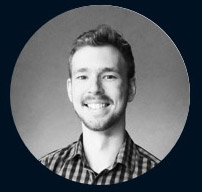 Simon Boxer is a concept artist turned generalist with 10+ years experience. His art can be seen in games including CS:GO, DOTA 2, Armello, and The Stanley Parable.

He now runs Twice Different, an indie studio which recently released Bounce House, a mobile game about bouncing children off a bouncy castle. 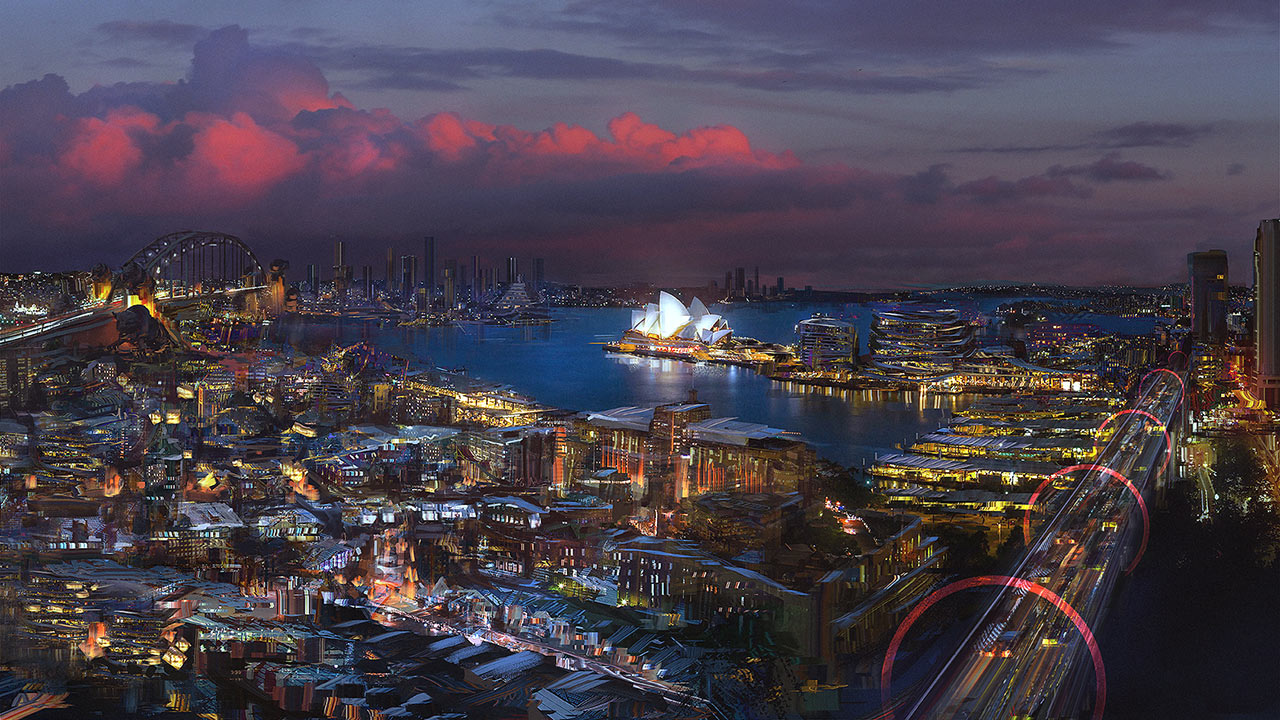 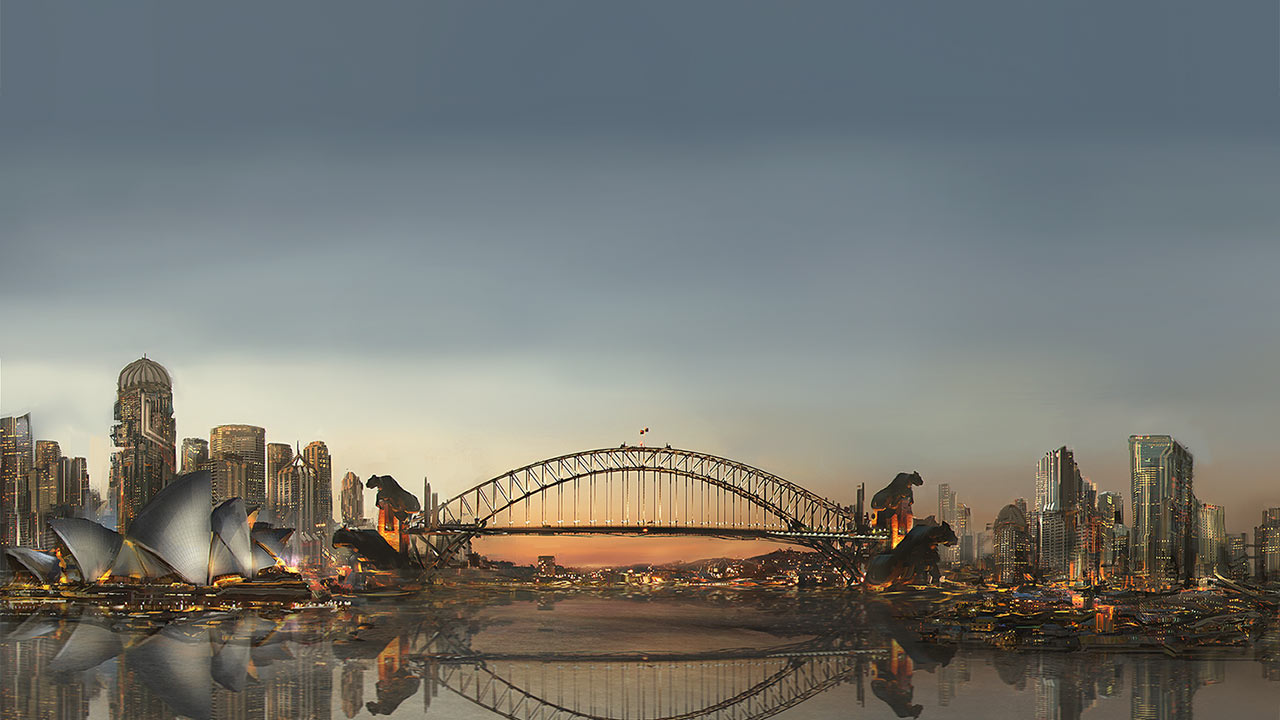 For both the Melbourne and Sydney illustrations I aimed for a vivid and fantastical art style, seeking to recreate the cities in a way that captured the larger than life atmosphere of Wakanda from the Black Panther comics.

For Sydney I used different angles of Sydney Harbour for both images, setting one shortly before, and the other shortly after a sunset. I made Sydney much less tropical than Melbourne, taking the orange lights from either side of the Harbour Bridge and spreading them across the city. I also couldn‘t resist perching some giant statues of panthers on either side of the bridge, as it just seemed the perfect place to put them. 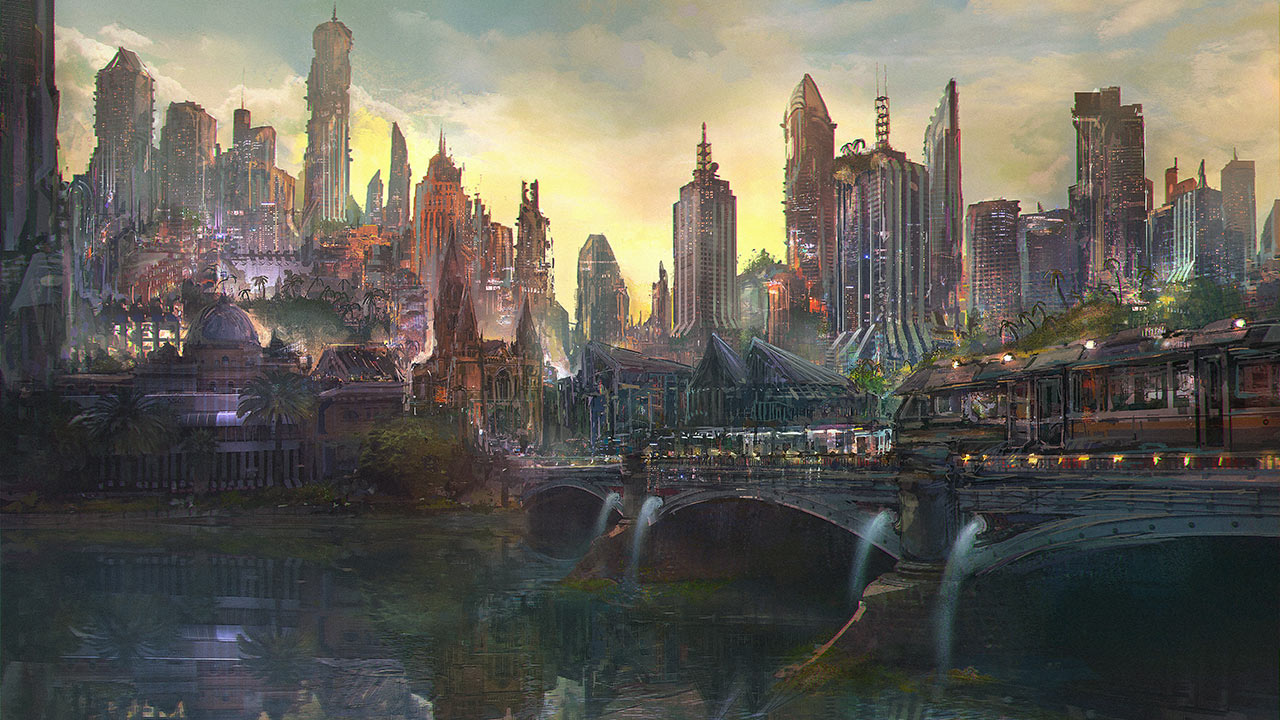 I used plenty of reference images to keep the cities recognisable, and included landmarks like the Sydney Harbour Bridge, the Opera House, Flinders Street Station, the Rialto and the Yarra River. I also took some photos of my own around Melbourne, which I later used to build up textures while painting. Some of these textures were turned into custom shapes in Photoshop which helped to lay down a lot of small details (namely windows).

I noticed that Wakanda is often depicted incorporating water and nature into its architecture, so I attempted to make use of the Yarra River in the Melbourne illustrations while adding small stretches of jungle between its various structures. In general the city was made more dense, taller and more extravagant to reflect the advances in technology and increase in population. 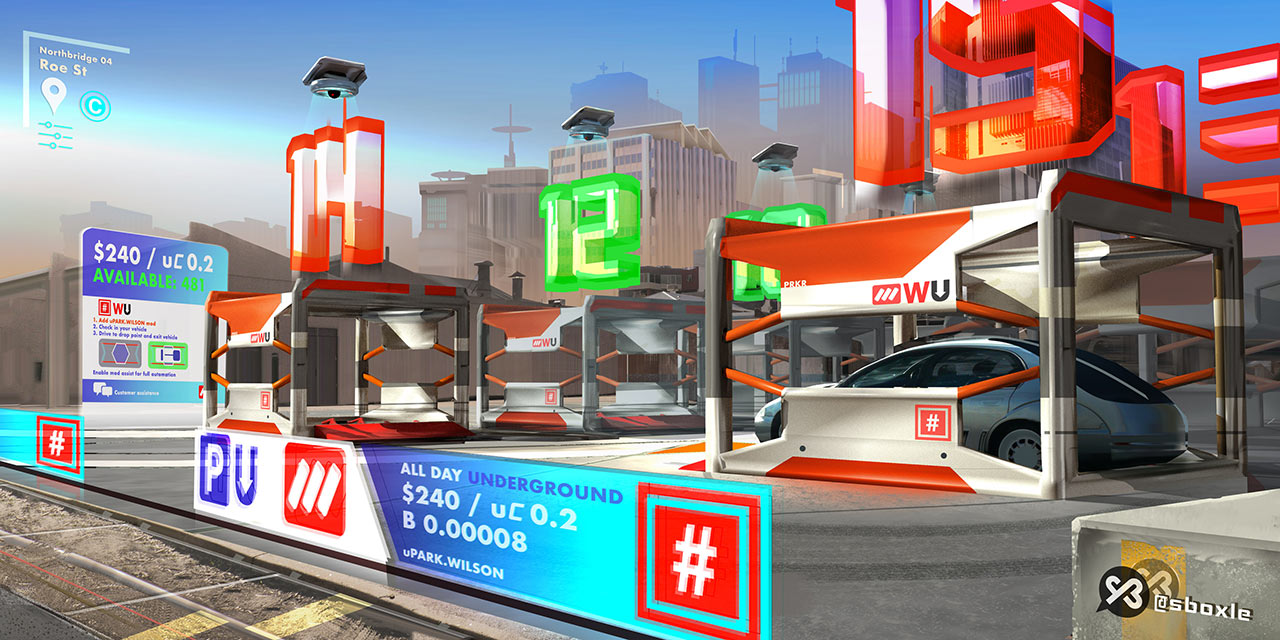 Perth 2059: The kind of city where you get 300 sunny days a year, and when I say sunny I'm talking in a range from "this is bearable" to "incinerator."

The bleached streets amplify the sun. If you're outside you‘re either at the beach or making your way to a vehicle, building or the Underground.

Perth‘s always been a driving city. It‘s built on car scale with extreme urban sprawl. Even now public transport is almost as expensive as driving and paying for parking. Come 2059 the CBD‘s growth spreads deep into Northbridge. Parking vendors breach new territory with underground parking and storage. We built up and down with underground networks for pedestrians and transport, enabling people to commute entirely within climatised tunnels, with large vehicles restricted to surface roads.

This concept gives a glimpse of a future Wilson car park on Roe St, looking into Northbridge.

Almost all technology is AI assisted and mostly self-servicing, running on a combination of solar and wireless power. Perth was scheduled to complete its NBN rollout in 2049, only to be superseded by Google wireless.

Over half the Perth population are augmented, and national surveillance is rampant as our leaders follow in the steps of China, as Australia becomes a test region for international social credit.

With the dominance AR and holographic tech, advertising also has new regulations which grant more user control and region-based filtering. Geolocated ads are shown only while in the area, or at points of focus. 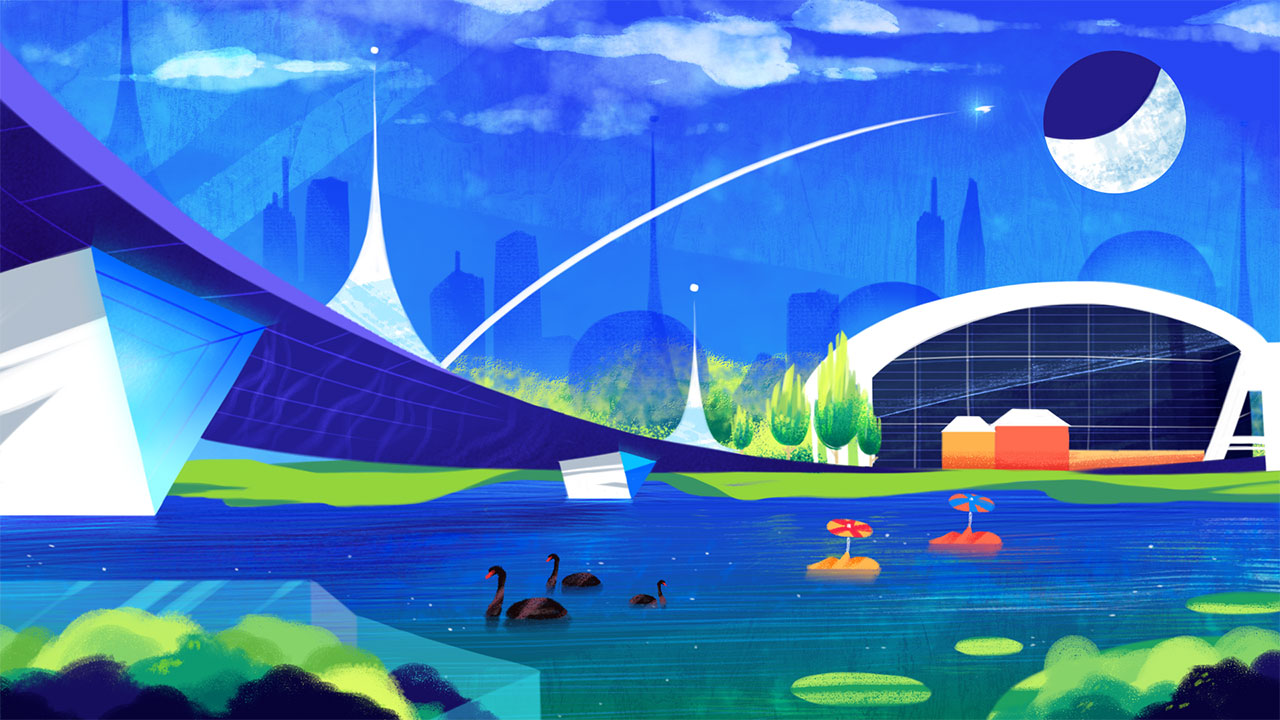 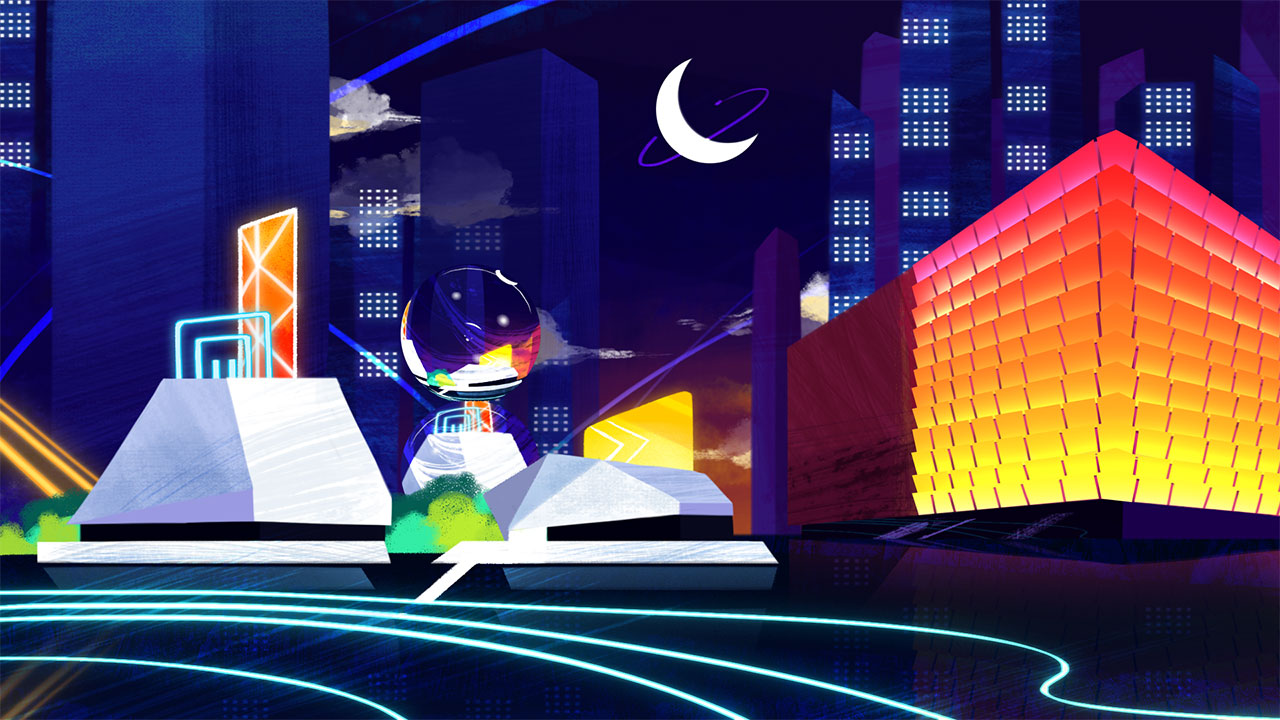 I wanted to contrast two futuristic aesthetics - a lush, green, vibrant future with a grittier neo-noir future. Wakanda‘s vision of the future is an optimistic one, so I wanted to create an Adelaide that reflected that.

I took significant Adelaide city landmarks and built around them, focusing on a more stylised representation of the city rather than a geographically correct one. I wanted to show how the landmark could be transported into a more futuristic time without losing the sense of the city.

Both images represent a positive futuristic outcome, a progressive future for Australia. One image illustrates Australia‘s environmental future - a focus on the cleanliness of our natural environment, the native flora, and Adelaide‘s local fauna, the black swans. The Footbridge, the Convention Centre and the River Torrens tie well into this aesthetic and provide the illustration with a dynamic perspective, as well as the bright, clean greens and blues.

The second image focuses more on Adelaide‘s technological future, a future inspired electro-city. The Rundle Lantern and Rundle Mall‘s "The Spheres" already fit really well with the late night, neon, highly contrasting colour scheme and really helped with bringing those Adelaide landmarks into the illustration. I wanted the focus of the image to feel almost towered over by the high-rise buildings, as the industrial advancements begin to take over the city.

Marvel Studios‘ "Black Panther" follows T‘Challa who, after the death of his father, the King of Wakanda, returns home to the isolated, technologically advanced African nation to succeed to the throne and take his rightful place as king. But when a powerful old enemy reappears, T‘Challa‘s mettle as king-and Black Panther-is tested when he is drawn into a formidable conflict that puts the fate of Wakanda and the entire world at risk. Faced with treachery and danger, the young king must rally his allies and release the full power of Black Panther to defeat his foes and secure the safety of his people and their way of life.