Try This Game If You’re Already Too Good at Wordle

Are you too good at Wordle? Of course you are. You know all the strategies: which words to guess first, which vowels to test right out of the gate. You’re probably sick of embarrassing everyone on Twitter with all your green squares. If Wordle feels too easy these days, you might want to try its twisted cousin, Absurdle.

In Wordle, you have six chances to get the word right. Absurdle, however, gives you unlimited attempts. Before you scoff, however, consider the other major difference between the two: Every time you guess wrong in Absurdle, the solution to the puzzle changes.

But that’s not all; Absurdle isn’t just picking one word and seeing if you match, it’s picking as many similar words to your word as possible in an attempt to prolong your Absurdle game as long as possible. If your initial guess was SPEAK, Absurdle will run through every word in its database that doesn’t contain those letters, and that pool of words will be its answer key. As such, it’s impossible to guess the word on the first try. It’s also impossible to guess on the second. According to qntm, the shortest possible Absurdle game is four turns.

What you’re really trying to do is back the game into a corner; once it’s impossible for there to be any unique words that contain none of the letters you guessed, you’ll start to see yellow and green squares appear in your guesses. Absurdle will still switch up the possible words, but that pool gets smaller and smaller as you continue guessing. Eventually, there will only be one possible word left based on the way the game has progressed, and, essentially, it then turns back into regular Wordle. 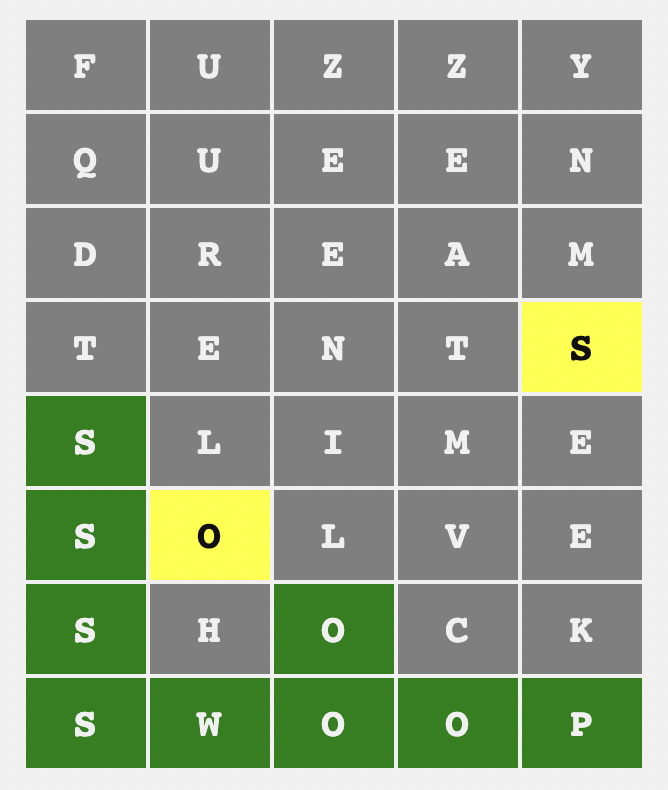 A key thing to remember about Absurdle is that it’s entirely deterministic. Unlike Wordle, which has one set answer that changes day to day, using the same guesses in Absurdle will always result in the same outcome. The game is designed that way, since there’s no “answer” from the start.

If these rules sound a little confusing, don’t worry; qntm has an extended explainer on how the entire thing works. The best way to understand Absurdle, however, is to play it.