Three Podcasts Every History Buff Should Know About

When those bullies from business school mocked you for getting a useless doctorate in medieval literature, they didn’t see the world of history podcasts coming. Now it’s cool as hell to sit in your closet and read out your doctoral thesis. It turns out that podcasts are a fantastic way for people to learn about history, at all scales and time periods, one lesson at a time.

I've got nothing against Dan Carlin's 'Hardcore History', but it seems to eat up all the publicity for history podcasts. That's a shame, because the podcast format is a fantastic way to dive into a thirty-hour history of the French Revolution, or snack on a 12-minute account of how Warren G. Harding, betrayed by his corrupt Cabinet, publicly projected all his feelings onto his dog Laddie Boy.

Many history podcasts have now been running for over a decade, before Serial was a glint in Sarah Koenig’s eye, so you can start bingeing immediately. Following up on our first instalment, which introduced the shows Something True, Crimetown and Revolutions, here are three more excellent historical podcasts (that aren’t that one super-famous one). 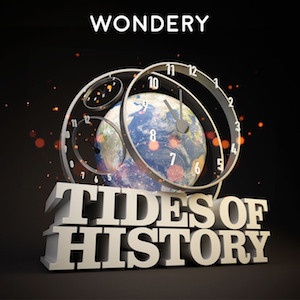 “Events, and even individual people, are just crests of foam on top of the waves that the deeper tides of history carry on their strong backs.”

Historian Patrick Wyman uses this quote from historian Fernand Braudel to introduce Tides of History, his popular podcast about the long rise of the Modern Era.

Wyman agrees with Braudel that history is better explained by describing wide trends and developments than by listing kings and battles – but that kings, battles, and even the lives of everyday people make useful examples of the wider forces that drive and are driven by them. In Wyman’s case, it’s the tides that can best explain the rise of the modern nation-state.

While most histories of the Modern Era put its start somewhere around the Renaissance, Wyman starts much earlier – roughly where his last podcast, The Fall of Rome, left off. Unlike kings and battles, the tides of history can’t be pinpointed to certain dates.

This makes the first few episodes feel a bit like throat-clearing, but the payoff comes as the podcast builds on its ideas, giving the listener a broader understanding of what life was like (and how the world worked) on a very fundamental level in the millennium between between Rome and the Renaissance. For this reason, I recommend listening to the whole series from the beginning.

Like most history podcasts, Wyman’s is basically a series of lectures. But this is less “Anyone? Bueller?” and more TED Talk, and for once I mean that in a good way. Wyman likes to begin episodes with a richly produced slice of life scene, narrated over music and sound effects, which can deliver the same frisson as firing up a game of Civilization. These scenes help to ground the abstract concepts that Wyman throws around.

Wyman bounces back and forth between the early and late Middle Ages, analysing the long prehistory of a phenomenon before showing how it came to a head. Most recently, before tackling Christopher Columbus and the Age of Discovery, Wyman spends an episode on Medieval exploration.

Once you get used to this Westworld-style timeline, you can fully appreciate how the show turns all the names and dates you learned in history class from trivia into a deeper understanding of how the present world came to be. 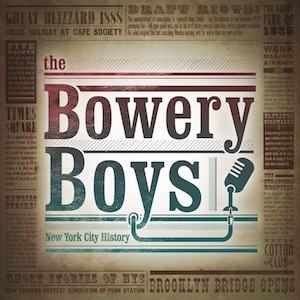 The Bowery Boys is just about the opposite. All 262 episodes of this conversational show are about New York City history, each one examining one figure or era or event. Co-hosts Greg Young and Tom Meyers are casual but educated, and their rapport makes this feel less like a lesson and more like overhearing two very smart people in a bar.

A bar like McSorley’s Old Ale House, one of many classic NYC institutions that I knew the Boys had covered before I even checked. (Thanks to the show blog’s use of tags, you can easily go from that episode to more night life coverage, or other East Village history.)

You could start by simply googling “Bowery Boys” and the name of any major New York figure or institution that you’re particularly interested in; they have probably covered it, sometimes from multiple angles.

The best example, and a great starting point, is “Revisiting the Stonewall Riots: The Evolving Legacy of a Violent Night”, a 2017 update of the Boys’ 2008 episode on one of the biggest events in the history of gay rights in America.

History is really historiography, and Young and Meyers prove this as they discuss how much our understanding of Stonewall has been watered down by excluding people who didn’t fit a tight narrative, especially trans and minority activists who were often ignored while white men were celebrated. They address how this limited understanding affected their own work 10 years ago, now telling the stories they’d left out.

It’s this kind of thoughtful exercise that makes this show feel rigorous despite its less academic pedigree. 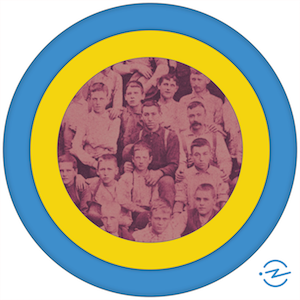 Most podcasts should be shorter. Very few shows really earn their two-hour runtime. Nate DiMeo works hard to earn every second of The Memory Palace.

Each episode, from 10 to 20 minutes, is a prose-poem based on a historical figure or artefact. DiMeo delivers the type of quiet, earnest meditations that get a Peabody Award and a write-up in The New Yorker (where you’ll learn that DiMeo has also written for TV shows such as Parks and Rec).

As with The Bowery Boys, I got this podcast from a Lifehacker commenter: Reader Tom C recommended starting with the episode “Notes on an Imagined Plaque”, and so do I. The full title is much longer, and reveals how DiMeo’s historical vignettes often address current political issues, such as how to deal with America’s many statues of slaveholders and Confederate leaders: “Notes on an Imagined Plaque to be Added to the Statue of General Nathan Bedford Forrest, Upon Hearing that the Memphis City Council has Voted to Move it and the Exhumed Remains of General Forrest and his Wife, Mary Ann Montgomery Forrest, from their Current Location in a Park Downtown, to the Nearby Elmwood Cemetery.”

Feel free to skip around between the self-contained episodes of The Memory Palace, but know that most episode titles are just a word or two and avoid revealing the subject. DiMeo has created his own best-of, with 10 suggested episodes, centred around the middle of the show’s run. Hopefully he’ll update soon with his favourite recent instalments.

In the meantime, he did name his favourite episode of 2017: “If You Have to Be a Floor”, made during his residency at the Metropolitan Museum of Art.