The subreddit /r/trippinthroughtime is for memes about historical figures, where someone in art or an old photo looks confused or silly. Each picture has a caption, usually treating the weird art as some modern relatable situation. But in the comment threads, you’ll often find someone explaining cool facts about the original artwork. 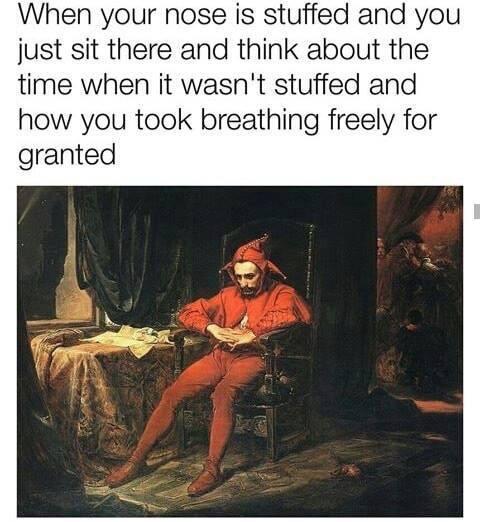 The top comment on the popular post above (written by redditor clouddevourer) explains what’s really going on in this painting:

The backstory of this painting is actually quite interesting, the jester is Stańczyk, who was an actual person, the letter to the left is news about Russians capturing the Polish city of Smoleńsk, the event that eventually led to the downfall of Poland. To the right you can see a ballroom with a partying crowd, who don’t care about the bad news, they just want to have fun. The only person who cares is the jester and he can’t really do much about it.

The painting was done by Jan Matejko, who painted many events in Polish history. One of his most famous works is Bitwa pod Grunwaldem, which is absolutely enormous, really stunning to see in person.

Not every post has an educational comment, but especially popular posts often do. Your chances are better if the artwork looks familiar, or is especially interesting even without the caption. (Search the comments for words like actual, anyone, real, interesting, or historical.)

Comments on other top posts explain how St. Veronica looks like she’s selling t-shirts at Jesus’s crucifixion, how doctors “cured” women by giving them orgasms, why a woman in an illuminated manuscript is bending over backwards and why the official portrait of former PM Frank Forde looks like an accidental candid photo.

They’re just simplified explanations, so don’t base your graduate thesis on them, but they’re fun and a good starting point for your googling. If you don’t find an explanatory comment, you can always run the meme through reverse image search.