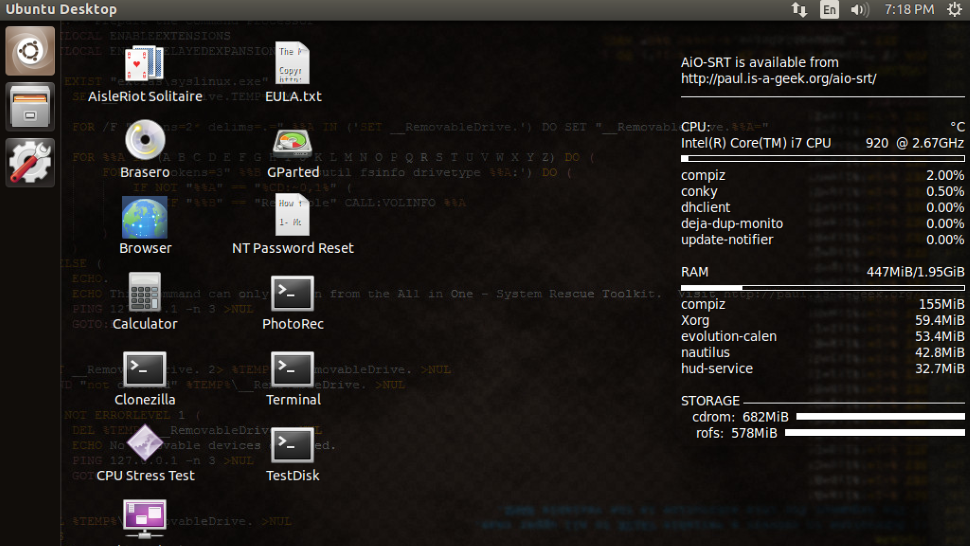 There's no shortage of system rescue and repair discs you can download and keep handy for when your PC gives you problems, but this one, from reader Paul, is streamlined, simple and has only a few effective tools on it - and no bloat. Paul, who's a field technician (I remember those days) sent in his rescue disc to us and explained that he'd just made it available to the public on his web site. Over at his site, he explains why he bothered in a world where there are so many discs to choose from:

There are already so many utility discs out there, I know. Many of the other discs I have used in the past tried to do way more than I wanted, with sometimes 10-20 different applications and utilities that all do the same thing. This overwhelming level of choice does not easily support the faster pace required of field service work. I also wanted to have both my bootable repair environment and Windows utilities in the same package to reduce the number of discs I had to maintain and keep on hand.

This disc started as a bunch of batch files that allowed me to work on multiple computers throughout my day and replicate the same level of quality results on each computer without having to maintain checklists on paper. Even with checklists, I would sometimes skip or miss steps that meant a variety of results when fixing PCs. Thus, an automated utility was born! I have since been using this disc in my own line of work for 99% of the problems I encounter in the field.

Just because the disc is streamlined doesn't mean there's a shortage of tools on it, though. You'll have to head over to his site for the full list (and to support the project) and for download links to burn your own or make your own bootable USB drive with all of the utilities on it. There are a few standouts though — the disc is a live CD, so you can boot to it and run things like Clonezilla, GParted, NT Password Reset, PhotoRec, Terminal and some other utilities (even a game of solitaire you can play while waiting for other stuff to finish).

The Windows Autorun portion of the disc contains a ton of Windows diagnostics for testing, troubleshooting and repairing bad Windows installs or partition issues; tools to extract or re-add product keys; network testing tools and speed tests; and even some security and malware removal tools. All in all, if you have a Windows PC — especially one you built yourself — or you're in charge of maintaining others, the disc is worth a look.

All in One - System Rescue Toolkit [Paul Bryan Vreeland]