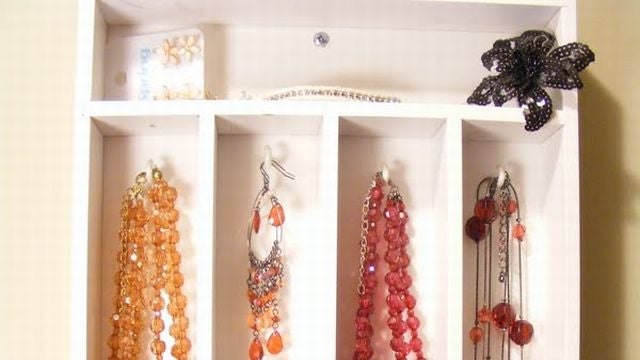 Without a good jewellery box, you can end up with a tangled mess on your hands — especially with costume jewellery, which you tend to be more careless with. The Mini Manor blog has an ingenious solution to your storage woes: mounting cutlery trays and hanging the jewellery.

Pick standard medium-sized trays — Mini Manor used bamboo trays for the project, since they are a bit heftier than plastic and will stay firm on the wall. But if you’re going to do that, there’s one tip to know:

Lee started screwing in the (cup) hooks, which immediately cracked the back panel. Bamboo is a very hard wood so it won’t expand to accommodate the size of the hook’s screw. So he had to drill pilot holes before screwing the hooks in. A bit more trouble but it worked!

The project as described also coloured the trays white, but that’s up to you. Of course, it’s best if you do the colouring and screw the cup hooks in before you mount the trays. Mounting is a simple job of drilling them in. A single screw at the top should hold them, but you might want to go with two in the corners just to be on the safe side.

Now just hang your necklaces on the hook and store smaller items like bracelets and earrings in the side panel of your new wall-mounted jewllery organiser.