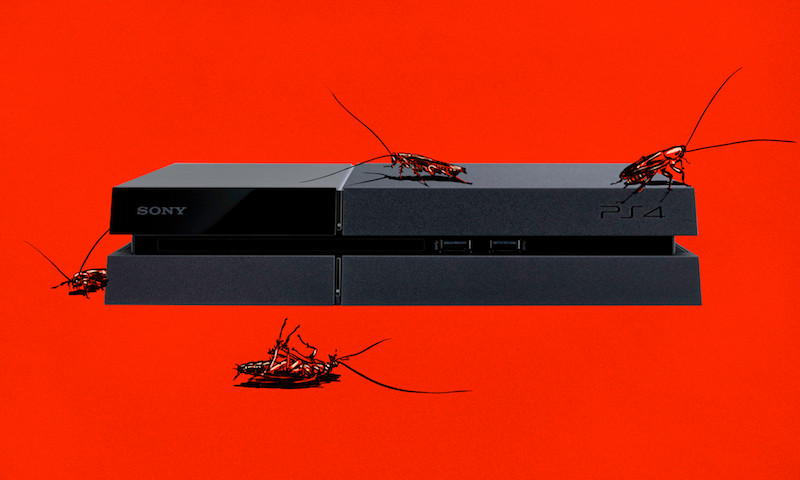 First, there were snakes on a plane. Then, we had sharks in tornadoes. Now, there is a darker and more prevalent combination of pests and unlikely places they exist: cockroaches in your PS4.

I heard about PS4’s roach problem at an independent console repair shop on the Lower East Side of Manhattan. XCubicle is a clean and well-kept business where locals drop off their broken consoles to get diagnosed and repaired.

Its co-founder, Patrick Che, was listing the types of repair issues he encounters on a day-to-day basis: coins inside disc drives, 3DS mods gone wrong. That’s when he pointed to the “roach bags,” black garbage bags heaped up in the corner of the room.

“You see those bags?” he asked. “Those are bags full of roaches. Those are all dead by now.” Che added that roach-infested PS4s are so common that XCubicle now charges a $US25 ($33) “roach fee.” They get at least one each week. Other console repairmen interviewed say that at least half of the PS4s they receive are loaded with roaches.

In cities, anywhere dark and warm runs the risk of hosting the horrible Periplaneta Americana. Most consoles lie horizontally in dark or enclosed areas, like media centres, so they’re pretty welcoming to the little critters. Roaches make their way into Xbox Ones sometimes, too. Console repairmen tend to get more PS4s in than Xbox Ones in part because there are more PS4s out there, but according to independent console repairmen interviewed, the PS4 also has the most to offer as a roach hotel.

The PS4’s design accommodates roaches better than other consoles’ because its ventilation grates are wider. Those vents are located at the bottom of the console, so roaches can get in with ease. Also, according to repair professionals, the PS4’s insides gets hotter than the Xbox One’s because of its internal power supply. Warm, in an enclosed space and close to the floor, PS4s are great roach nesting grounds.

Roach-infested PS4s are a big problem. Especially because Sony won’t take them in for repairs (Sony did not provide comment). Instead, independent console repairmen have the pleasure of scrubbing the roach crap off your console’s power supply. Matt Zieminski, who works for console repair suite IFixit, told me that most of the time, the consoles aren’t sent in for roach cleaning — the users don’t know they’re infested.

The PS4s just stop working and the owners don’t know why. Turns out, the PS4’s internal power supply fries roaches onto its components, which can stop the PS4 from turning on. When the bugs have made little homes in there, and have little roach kids, those roach kids and their faeces can melt onto the hardware.

Zieminski knows a PS4 is infested because “Roaches leave traces,” he says. “Their poop colour is distinct and has a certain smell to it. We kind of know right off the bat if there are poop stains on the vent of the fan — we assume it’s bug-loaded.” To get it working again, console repairmen usually replace the power supply. Then, they will take the console apart, sterilize it with an ultrasonic cleaner, and put it back together.

How do gamers prevent this disgusting and traumatic scenario? PS4s should be stored in the open, where they have enough airflow for breathing. They should also be stored higher up, so roaches have a hard time climbing to them. And, of course, you should keep your place clean.