How to Make Your Own Oat Flour (and Why You Should)

Alternative flours aren’t going anywhere, nor should they. As tradition would have it, alternative ingredients are stupid…until they’re the best thing ever. Oat products fall in line with that trend: It’s finishing its hater-stage, and now there are loads of recipes that use oat flour instead of wheat flour. You can buy it in the grocery store, but unless you’re using large quantities of it on a regular basis, there are some benefits to making it at home. Luckily, it’s extremely easy to do.

What is oat flour?

Oat flour consists entirely of pulverised oat groats (oat groats are the whole kernel removed from the husk). It’s gained popularity as a gluten-free substitute for wheat flour for its health benefits and various uses in cooking and baking. Depending on what kind of recipe you’re using it in, oat flour can be a better alternative flour than some with a grittier texture, like almond, because of how well it binds ingredients. If you’ve ever forgotten about a bowl of oatmeal on the table before, you’re aware that after sitting for 10 minutes or so, it thickens into a porridge brick. That’s because the starches continue to gelatinize for a time even after being removed from heat. (To read more about the wild world of oat porridge, check out this article.)

Oat flour is also flavour-neutral, which you also know if you’ve ever tried a bowl of plain oatmeal without adding some kind of sugar. For baking, this is actually preferred — some flours, like nut flours or coconut, can add a subtle-but-lingering flavour that you might not want.

What should I bake with oat flour?

Making oat flour yourself builds versatility into your cupboard, and it saves space. The packaged kind is excellent as a flour replacement because it’s finely ground, but you can change up the texture if you want to use the flour in different recipes. For a little texture, pulse the oats until you achieve a medium-small grit — this type is great for pancakes, waffles, and as a bread crumb replacement. Process the groats a bit less, and the consistency will be fine for knobbly cookies, like digestives. Use the rolled oat stash that you might already have instead of getting store-bought, and switch up the types of oat flours you make for specific applications. That way, you’re saving precious cabinet space instead of cramming in another shapeless bag of flour.

How to make oat flour from scratch

You can use a blender or a food processor, but I find the conical shape of the blender gives a more consistent texture. A food processor works fine, but the smaller particles become very light and the bigger pieces seem to surf around the blades after a certain point. (Granted, my food processor is not exactly state-of-the-art.) For the best results, use rolled oats; the old-fashioned or quick-cooking kinds both work well. The amount will depend on how much you need for a particular recipe or the size of your appliance.

Add the groats to the container and blend continuously if you want a fine powder, pulse if you want a medium or coarse texture. This can take a few pulses or up to two minutes until you achieve your desired texture. 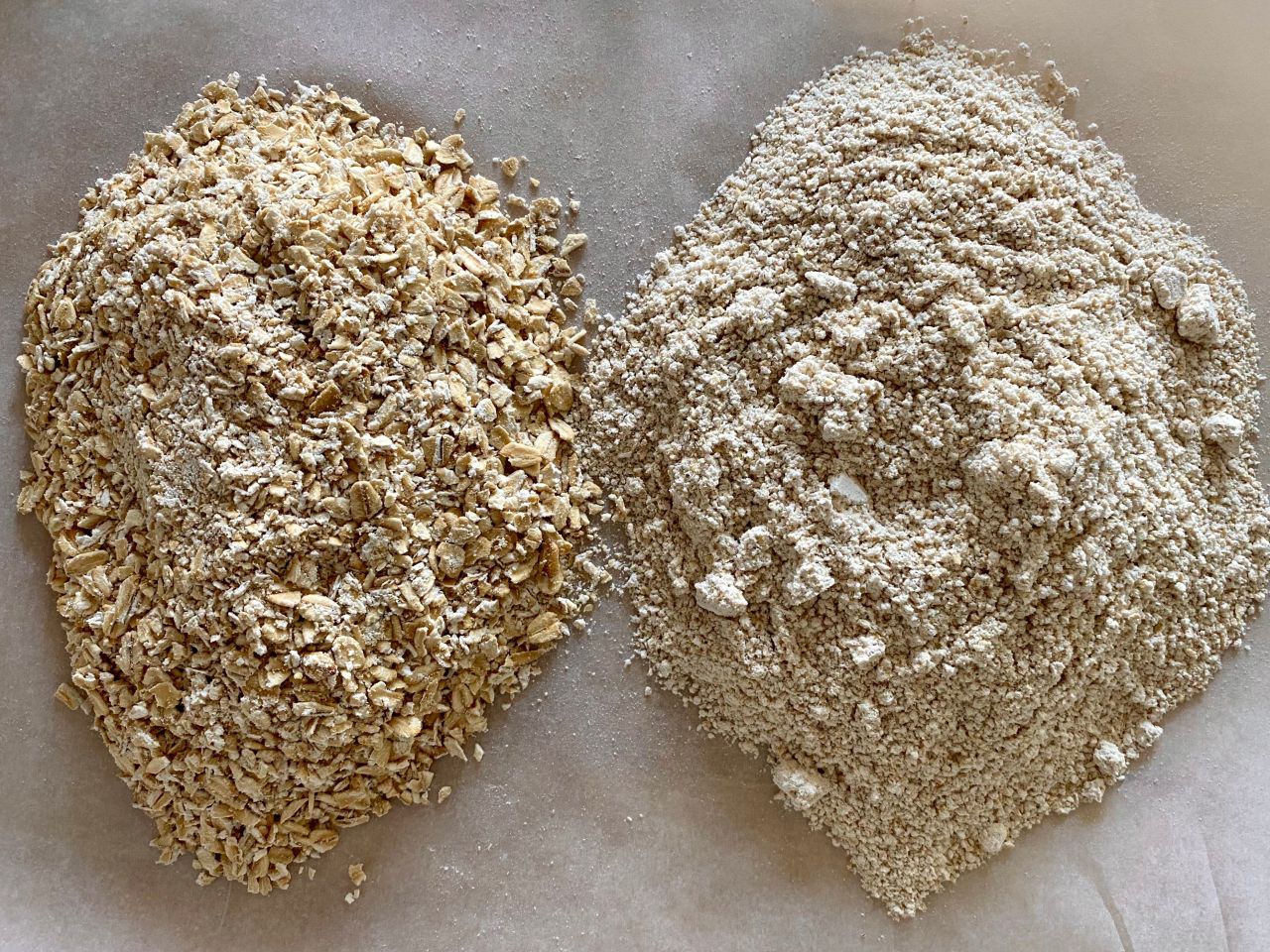 Oat texture after pulsing and after one minute of continuous blend. (Photo: Allie Chanthorn Reinmann)

One leveled cup of rolled oats will give you about one cup and a tablespoon of oat flour. (This is presumably from the amount aeration the particles get after grinding.) When in doubt, go by weight: four ounces of rolled oats will always give you four ounces of oat flour. Since oats continue to absorb liquid as they sit, let your batters and doughs rest for 15 minutes before giving them a final stir. And afterwards, pour it into a cooking vessel. Store any extra flour in an airtight container until your next oat adventure.