Can This TikTok Hack Make Your Cinnamon Rolls Taste Like Cinnabon?

Cinnamon rolls are the epitome of a “reconsider food.” These are foods that have the special ability to make you say, “Nah, I really shouldn’t. OK, but maybe just one.” It’s a real act of strength to walk by a Cinnabon without taking two or three extra deep breaths; the aroma of that cinnamon roll is nearly thick enough to chew on. When I heard about a Cinnabon hack for packaged grocery store cinnamon rolls, I had a distinct thought of, “Nah, that’s unlikely. OK, maybe I’ll just try it.” The results were delicious, and yet, I don’t think I would do it again.

I read about this TikTok-famous Cinnabon copycat hack on The Kitchn, which delivers the objective in a straightforward way: Add heavy cream to store bought cinnamon rolls and experience the doughy magic of a Cinnabon roll. Supposedly, the quick addition of cream transforms the regular grocery store cinnamon roll into the coveted food court delicacy. The idea is that once the rolls begin to bake, the cream pooling up in the pan will be absorbed into the dough and produce the ultra-moist, delectably undercooked texture of the cinnamon treat we’re dreaming of. Other bloggers tricked-out the frosting with some cream cheese or added a layer of extra cinnamon and brown sugar to the pan, but the main device is always heavy cream.

The Kitchn suggests using the Pillsbury Grands cinnamon roll tube from the store, as opposed to the smaller original-sized tube of cinnamon rolls. Logically, this makes sense because Grands are bigger, and since it’s the Cinnabon we’re after, we need to get as close to the size of a manhole cover as possible. But, for the sake of science, I got both sizes. 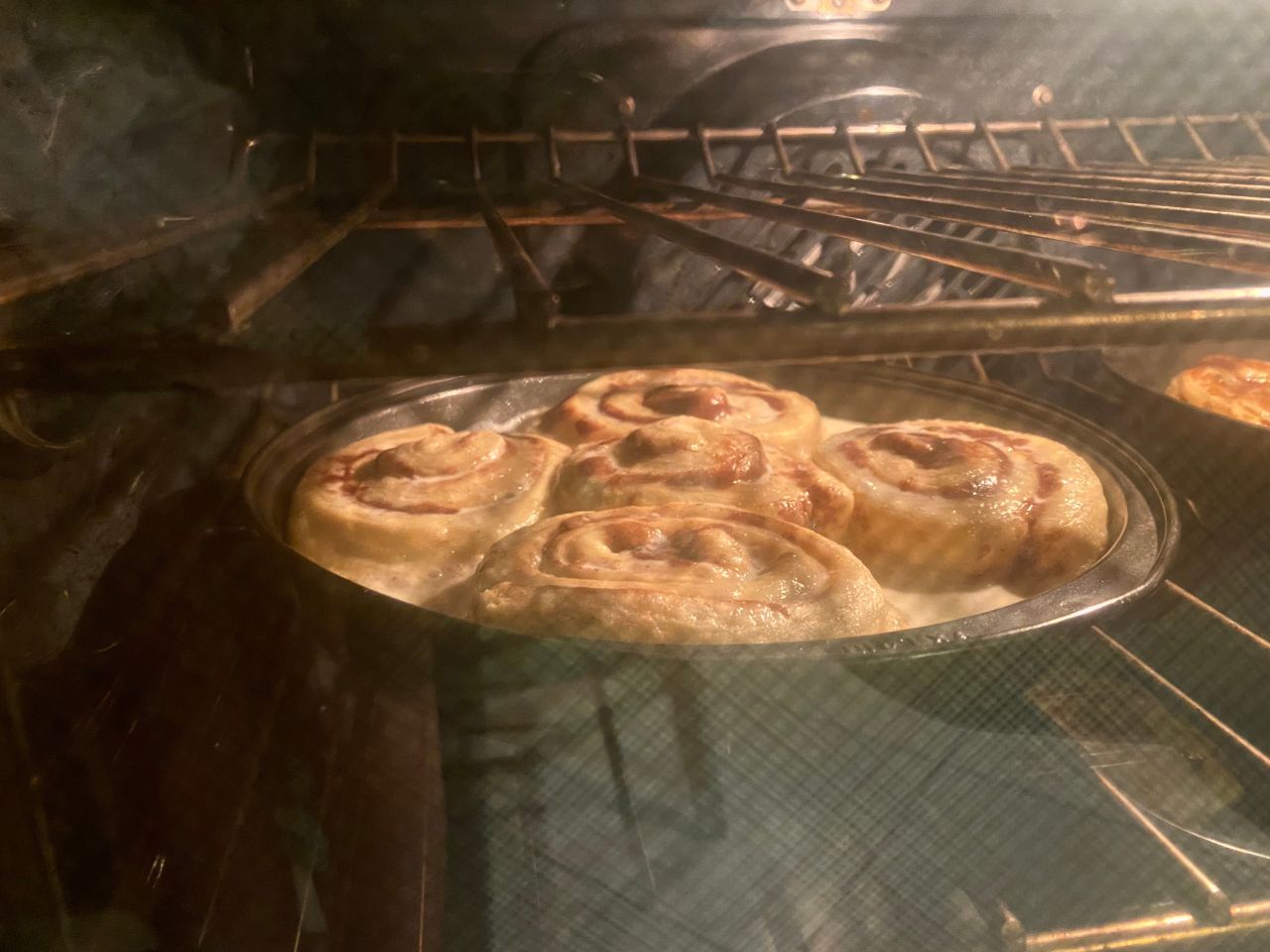 Armed with heavy cream and pneumatic cardboard canisters, I set to work. All the rolls went into oiled, nine-inch cake pans, as if you were baking them as usual. I poured a half cup of heavy cream over each pan, trying my best to coat the tops of each roll. Cream pooled up on the bottoms of the pans, but this was all according to plan. The rolls went into a preheated oven, as stated by the directions on the packaging. Then, I watched.

The cream started bubbling around the edges of the pan and the rolls began to swell within five minutes. The normal bake time of these cinnamon buns is around 15-20 minutes, but with the addition of a liquid ingredient, I found that the centre was still undercooked at the end of 20 minutes and I left them in for an additional five. Once the edges of the outer rolls were lightly browned and the centre bounced back when pressed, I took my hacked-cinnamon rolls out of the oven. 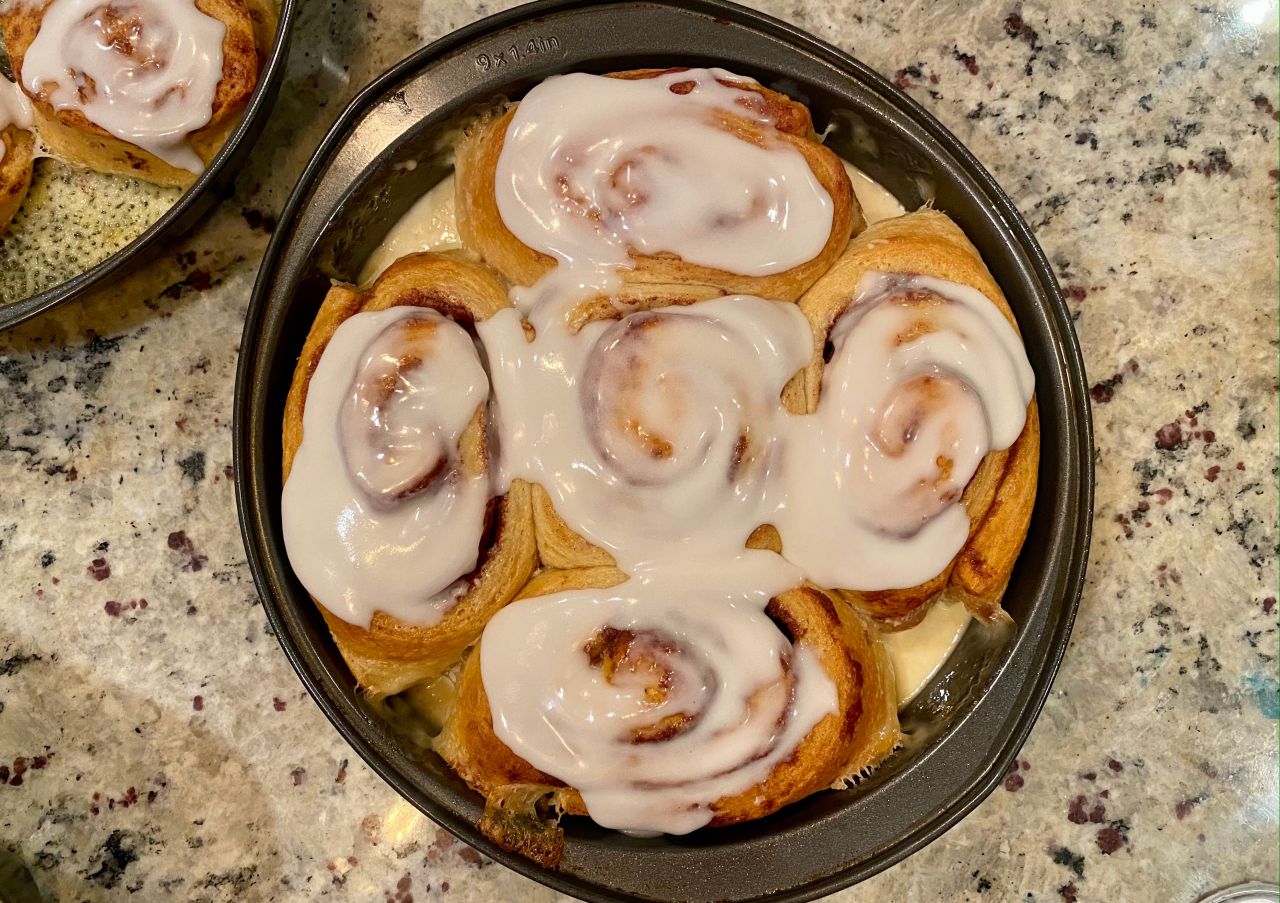 I noticed that there was still some cream pooling in between the Grands rolls, and some of the empty spaces in the original sized batch had caramelised cream residue, which I found enticing. I let the rolls cool for 10 minutes just in case there was any residual cream absorption (there was little to none) and then smeared on the icing. They looked amazing, they smelled even better, and the flavour was tasty indeed. They were soft, hydrated, sweet-cinnamon delights, and I crushed at least two of them. The smaller buns had some lacy, crusted edges with caramelised cream crystals, which was an unforeseen tasty benefit. Was it worth it as a Cinnabon hack, though? No. (We do, however, have a few legit Cinnabon hacks, if you are in need of such.)

Let me be clear that it depends on what you view as a hack. I view it on a case by case basis, and in this instance, the results are underwhelming considering what you’re starting with. The hack is turning a damn fine store-bought cinnamon roll into…another delicious cinnamon roll? The flavour of both rolls are unquestionably great and Pillsbury already has a collab roll with Cinnabon.

Under these circumstances, I would only be impressed if the hack addressed the two remaining differences between the food court giant and the grocery store canister: Size and filling. Neither of these change significantly. I made a control cinnamon roll without heavy cream and at first I thought the hacked ones were growing larger, but after baking and cooling, I measured them and they were equally sized. Even if the added moisture made them grow past their normal size, a Cinnabon is significantly larger. The filling is also unaffected. One of the most indulgent parts of a real Cinnabon cinnamon roll is the luxuriously thick and gooey filling, and until that heavy cream learns to creep up into the swirls and thicken a Pillsbury roll’s cinnamon filling, I will remain unmoved.

Is this a great hack to use up leftover heavy cream, though? Why, yes! If I’m already cracking a package of Pillsbury buns, I see no reason to stop myself from dumping in a half cup (or less if that’s what I have in my fridge), but I wouldn’t make a special trip to hit the heavy cream shelf for this. I’ll always encourage folks to be food-curious, so give it a shot if you want, but I would suggest unravelling a couple of Grands to roll them into one giant cinnamon roll before decanting any cream.