10 of the Hardest Video Games Ever

Sometimes you want to melt away the hours managing an island of misfits and paying back a predatory raccoon. And sometimes you wanna be put through the wringer — to test every fibre of your patience, skill, and smarts on your path to victory.

From its first steps in arcades full of quarter-munching machines designed to drain your wallet, to the meticulous challenge of Hidetaka Miyazaki’s Souls series, to that damn hoverbike level in Battletoads, difficult video games have fascinated and challenged players for as long as the medium’s been around, and are still doing so today.

Here I’ve gathered some of the most challenging and popular games out there right now: Sidescrollers and metroidvanias without an ounce of compassion, a hilariously difficult running simulator, incomprehensibly sprawling adventures, tactical and puzzle games that’ll stretch your brain to the limit, and… a Winnie the Pooh baseball game? It runs the gamut, but every game has one thing in common: You’ll fail many times before you succeed.

Metroidvania titles have always challenged players in a battle of attrition as they explore hostile lands in search of the next save point before their meagre supplies run out. But, Souldiers? Souldiers takes it to a whole new level with Souls-inspired combat, multiple-classes, and emphasis on resource management. Retro Forge’s debut title hits hard — perhaps a bit too hard, since developer released a huge post-launch patch offering improved balance, difficulty, and quality of life features. But, at its heart, Souldiers is a game that wants to push players — and the boundaries of the genre — to their absolute limits, making it the perfect games to kick things off.

The current poster child for difficult games is Hidetaka Miyazaki’s modern masterpiece Elden Ring. Within hours of its release, its unrelenting bosses, devilish world design, and unforgiving difficulty curve had players pulling their hair out and racing to social media to vent. And things only get harder the further you proceed, with many players declaring an optional late game boss is the toughest in any of Miyazaki’s many infamously difficult titles. Elden Ring will challenge you in all the right ways, and it truly is a journey worth the pain. 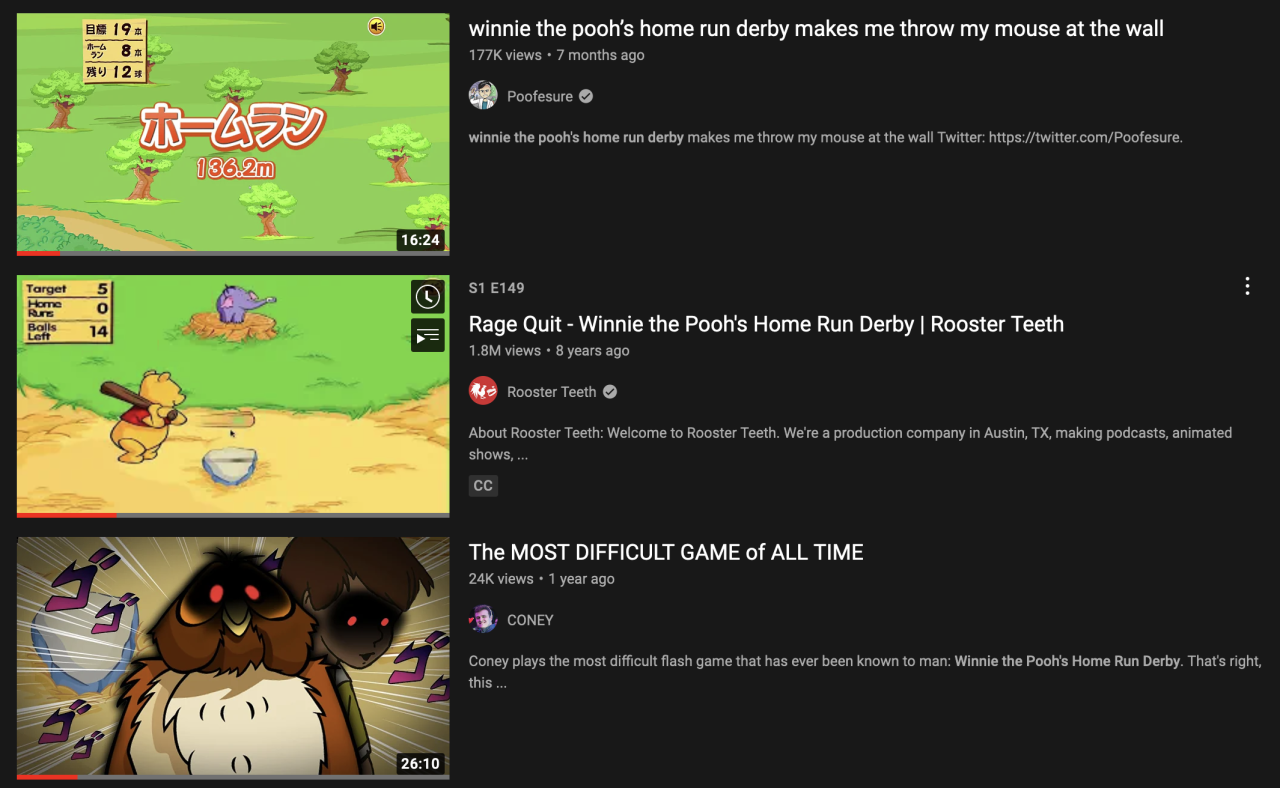 You raise your eyebrow — but you have no idea. Taking control of the loveable bear from the Hundred Acre Wood, you step up to the plate with a singular goal: slugging home runs. Only, your tools and skills are equivalent to those of a six year old tee-ball player who couldn’t make the school team, and your opponent is prime Randy Johnson. Your dignity is the bird. Good luck.

Grab your bat, and give it a try here.

Don’t let the gorgeous old-timey cartoon visuals fool you: Cuphead is tough as nails. This run-and-gun masterpiece from Studio MDHR requires perfect play, razor sharp timing, and precise mastery of enemy patterns, attacks, and controls. As the titular hero (or his brother), the player must battle their way through several levels, take down challenging bosses, and acquire new power ups to gain an edge in their eventual showdown against the Devil himself. Cuphead pulls no punches, doesn’t care about your feelings, and expects the absolute best of those who want see the ending. But it looks so good doing it, you’ll keep coming back for more.

Like all roguelikes, Loop Hero’s core mechanics are built around players dying. A lot. But, each time they die, they get a little stronger, and gain vital new experience and knowledge. Loop Hero isn’t difficult in the same way as Cuphead, with its rigorous and unforgivable action, or Winnie the Pooh’s Home Run Derby, with its, uh, [gestures at everything]. Its difficulty comes from the player’s willingness to dive deep into its card-based mechanics, learn the ins-and-outs of its systems, and tactically take advantage of every available resource. Loop Hero never holds your hand, and requires a deep understanding of its core gameplay loop to succeed — difficulty conquered by commitment and attention-to-detail. But, it’s so, so worth it.

A Mario game? On a list about the hardest games? You betcha. Mario’s known as one of the world’s most popular and accessible game series — revolutionising the medium several times since its debut in the ‘80s. But it also has a history of seriously challenging levels and a whole game devoted to trolling players, Super Mario Bros.: The Lost Levels, which Nintendo deemed too difficult for western gamers back in the day. But not even creator Shigeru Miyamoto’s most deviant fever dreams compare to the absolute mayhem created by fans in Super Mario Maker 2. Every level must be beaten by its creator to prove it’s possible before uploading — sometimes requiring hundreds or thousands of tries before they’re successful. This ain’t your grandma’s Mario.

Want to try the level above? You can download Sunny’s level, “1-1 but with a twist,” by using the following code YXL-D4C-TQF in Super Mario Maker 2.

How do you think you’d do running a 100m sprint at the Olympics without any training or practice? Whatever your answer, you’ll do much, much worse in QWOP. This browser game assigns your thighs and calves to separate buttons (the eponymous Q, W, O, and P) and challenges you to a hundred metre sprint. And it’s gonna go so, so wrong before it goes right.

Immediately upon release, Extremely OK Games’s Celeste became an indie darling thanks to its evocative pixel art graphics, melancholic story, and a difficulty curve that perfectly balanced precise control, creative level design, and endless deaths as players mastered level layouts. The game’s high difficulty was built into the narrative, as the player’s accomplishments parallel protagonist Madeline’s journey of self discovery.

Fortunately, Extremely OK Games recognise that difficulty can be a barrier of entry for many players, and loaded Celeste with some of the best accessibility options in gaming, allowing the player to fine tune the experience for their skill or enjoyment level. Play it with the vanilla settings, however — especially the special, significantly harder B- and C-Sides — and you’re in for a true test of your skill and patience.

The peril of exploring an alien world with little to your name but your wits and a weapon, is what makes the Metroidvania genre — established by classic titles like Super Metroid and Castlevania: Symphony of the Night — a definitional match for difficult, exacting gameplay. Team Cherry’s Hollow Knight is a prime example of how the genre can handle measured progression through new items, powers, and health upgrades, with a requirement for players to equally grow their skill as they spend more time with the game.

Like many other games on this list, Hollow Knight pushes you to perfect enemy attack patterns, conquer complex controls, and eke victory through small, incremental advantages. Unlike Celeste, Hollow Knight doesn’t provide accessibility options to give the player an edge, instead demanding you master the available tools in a way highly reminiscent of Miyazaki’s Elden Ring.

While it looks like a traditional tactics game like Front Mission or Fire Emblem on the surface, Into The Breach plays out more like a meticulous puzzle game. With limited resources, small maps, and powerful enemies, you’re challenged to find victory through small efficiencies, cause and effect choices, and a supreme understand of their team’s strengths relative to the opponent’s weaknesses. One small move might sink your ship several turns later — but you’ll learn something each time you get crushed. It’s a heady, unique mix of genres and there’s still nothing quite like it on the market.