The Tastiest Way to Keep Fish From Sticking to the Grill

Grilling a whole fish is an impressive, if slightly intimidating, display of grilling prowess. It’s not complicated — put the fish on the grill and cook until flakey — but the process is rife with potential missteps that can make would-be fish griller a little skittish. The delicate skin can stick to the grates and tear, and if you’re not careful with your cook times, the fish flesh can dry out, and no one likes dry fish flesh. Wrapping your fish in thin strips of centre cut bacon before grilling mitigates both of these potential disasters.

The method comes from grilling expert and cookbook author Elizabeth Karmel and via Ann Maloney of the Washington Post, and it is the perfect way to ease yourself into the world of whole-fish grilling. The bacon protects the fish, creating a barrier between its skin and the hot grill grates while infusing it with a delicate smokey flavour. It also keeps any stuffing — fresh herbs, lemon slices, sliced ginger root — securely inside the fish. Best of all, there’s no flipping involved. Just season your fish, stuff it with stuff, wrap it in bacon, and let it cook in indirect heat until the bacon crisps, which takes about 20 minutes.

“I buy Oscar Mayer centre-cut,” she said. The thinner bacon needs to sit out for about 20 minutes until it loses its chill. That way it will wrap easily around the fish and require no messy toothpicks to keep it in place. Centre cut is important because it is leaner. Bacon that is too fatty will shrink as it cooks, leaving your fish naked in spots.

I bought my fish at my local bougie grocery store, which only had thick, fairly fatty bacon. I did not want to go to second store, so I decided to force it, and everything thing Karmel says about using bacon is true. My bacon shrunk towards the head, did not get as crisp as I would have liked it to, and took 30 minutes to crisp at all. 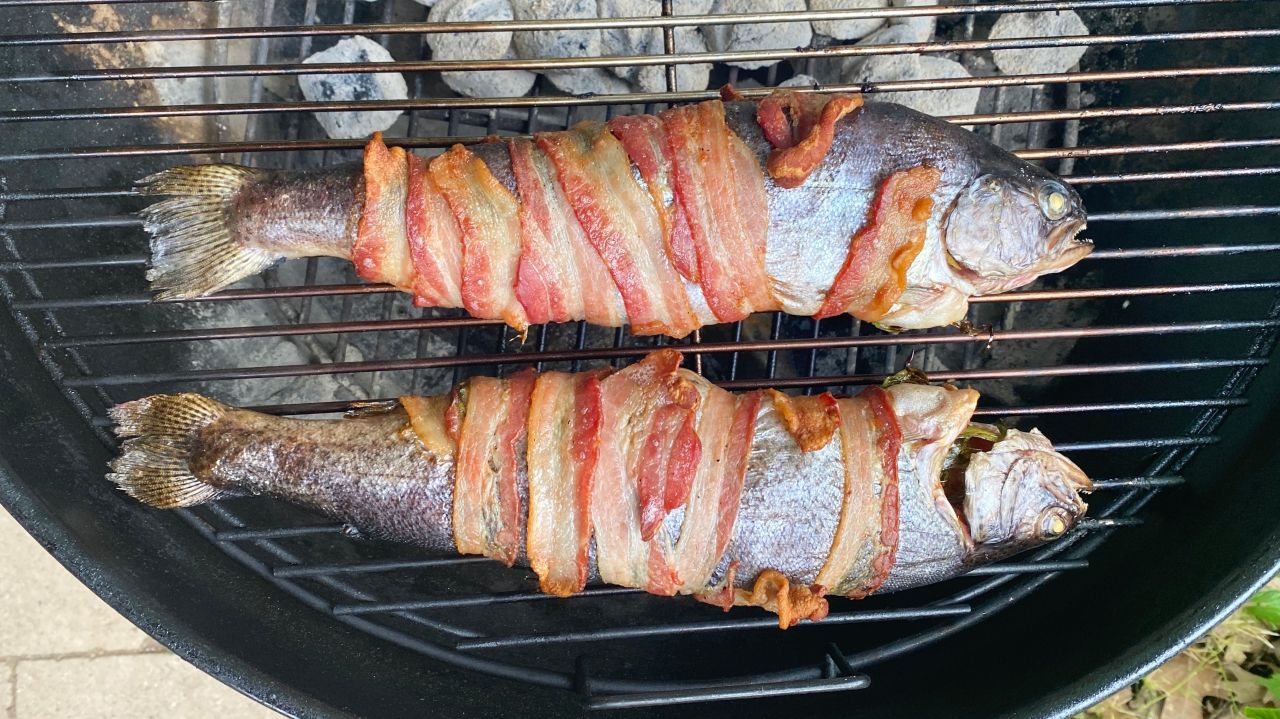 Still, despite the wrong choice of bacon, the cured pork still did its job. The fish came off the grill without sticking. It was also still moist, even after an extra 10 minutes on the grill, thanks to the added moisture from the herbs and bacon.

The flavour was as promised — slightly smokey, but not so bacon-y as to overpower the trout. I could still taste the tarragon I had stuffed inside the fish quite well. Overall, it was a delicious, low-effort trout.

Another bonus was the ease with which I was able to remove the skin, and how cleanly the meat came off the bone. After eating the first side of the fish, I was able to lift its skeleton clean off the “bottom” side, leaving behind a perfect filet.

I used trout for this experiment because I live in Oregon, and the trout here is quite good. You could also use branzino or snapper. Find a fish that’s around 3/4 of a pound or a pound, as anything smaller will finish cooking long before your bacon crisps, and anything much larger means you’ll run the risk of burning your bacon. (The fish at your fish counter are probably already dressed — meaning cleaned and gutted — but this guide can give you fish buying confidence if you’re shaky on your terminology.)

Following the recipe in the Washington Post will yield great results, though I do recommend increasing the amount of bacon per fish from four strips to five, if not six (another reason to get cheap, thin bacon).

Pat the fish dry with paper towels and brush inside and out with olive oil. Season lightly with salt and pepper, and stuff the cavity with your stuffing of choice. Wrap each fish in bacon, starting near the head just behind the gils, overlapping the bacon slightly. End about an inch from the end of the tail.

Create a two-zone heat setup on your charcoal grill by getting a bunch of coals hot with a chimney and piling them on one side of the grill. If you’re using a three-burner gas grill, cover and turn all your burners on high, then switch off the middle burner and reduce the other two to medium-high. If your grill only has two burners, heat one burner to medium-high and leave the other off. Aim for a temp of 200°C.

Set your fish in the indirect heat zone (the side without hot coals or flames) and let cook undisturbed until the bacon has crisped (about 20 minutes). Remove from the grill and serve promptly.