A lot has happened in the world of Wordle since we last posted a roundup of the best variations on the now iconic word-guessing game. It turns out there are more ways to guess a five-letter word than we ever thought possible, ranging from the fun and trivial to the devilishly devious. So let’s take a tour of 10 of the best Wordle alternatives, which I’ve ranked from easiest to hardest. 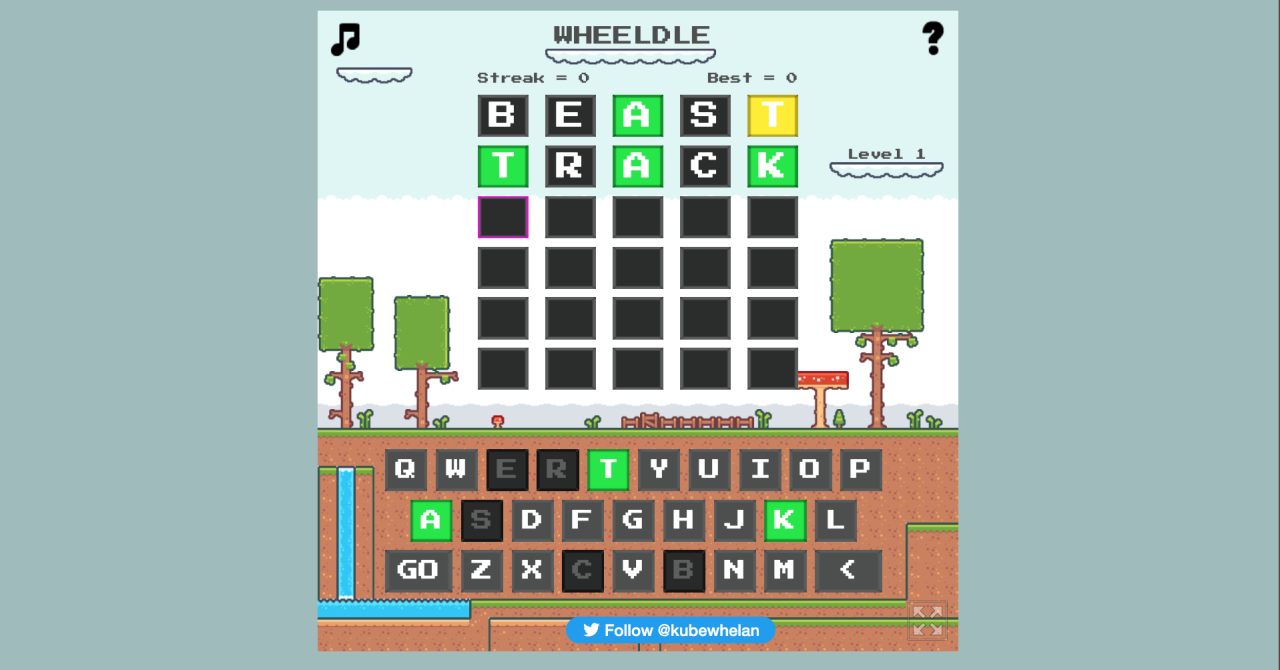 Wheeldle is a simple solution for anyone who just wants Wordle, but more of it, and all at once. The screen is set up like a video game: when you correctly guess a word, a number is added to a running counter and you get a new, blank grid. Fill a grid without guessing correctly, and it’s game over. You can play as many times as you want, and aim for a high score. When we made our last roundup, the idea of doing two Wordles at once — a game called Dordle — was new, exciting, and frustrating. But once you get the hang of it, it becomes just as easy as original Wordle, and you need to seek out stronger stuff. Quordle is the sweet spot for me, personally: guessing four puzzles at once means that every guess is likely to get you a green or yellow somewhere. Hurdle gives you five puzzles for the price of one. But I’m ranking it as harder than Wheeldle for the twist at the end: After you’ve solved the first four (in which the solution of each puzzle becomes your starter for the next), you’re presented with a grid in which all four of the previous solutions are already filled in. You now have only two guesses to work with as you attempt to clear the final hurdle. Waffle is the Rubik’s cube of Wordles, a grid where every part of every answer is in front of you, if only you can figure out how to move everything into the right place. You are allowed 15 swaps before the game is over, and you’re rewarded with gold stars if you can solve it in fewer. 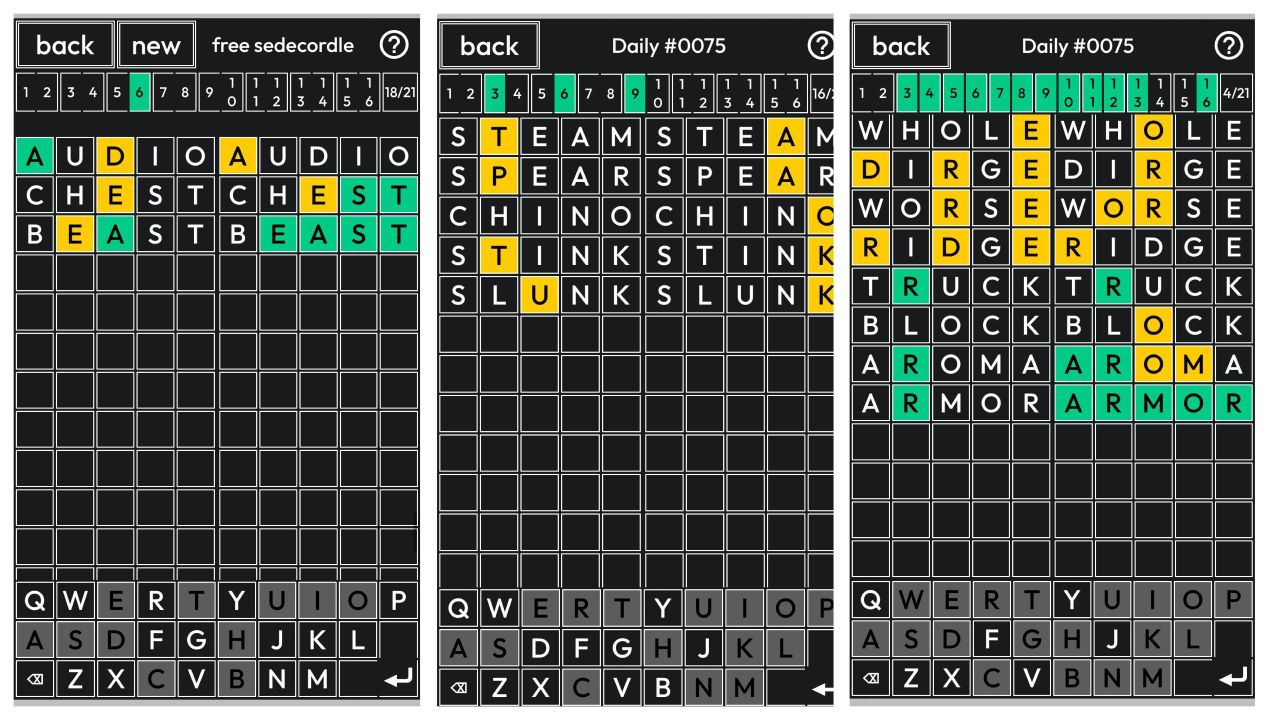 Remember Dordle (two simultaneous puzzles) and Quordle (four)? We’re going to skip right past Octordle for the moment, because I’m declaring the format’s pinnacle to be Sedecordle (16 puzzles). Yes, there are so many puzzles that you can only see two out of the 16 on the screen at any one time — and you are given so many guesses that, depending on the size of screen you’re working with, you can’t even necessarily see each whole game board. But the game’s creators have kindly given us a scoreboard at the top showing which of the puzzles you have already solved, and how many guesses you have left. If that’s still not enough for you, there is, of course, duotrigordle. We featured this one in the original roundup, but it’s making an appearance again because this game doesn’t get really enjoyable until you spend a lot of time on it. If you only tried it once, you really need to come back to it when you have a free evening.

Absurdle’s setup is that you’re playing against a computer that keeps changing its guesses, but it has to abide by whatever clues (green and yellow letters) it’s already given you. This means that you actually have control over the game. Don’t think of yourself as “guessing” the word; think of it as backing the AI into a corner, cutting off its access to the word families that make the game drag on (SPARE, SPADE, SKATE). Once I found a series of moves that guaranteed I would win in five guesses; that was a good day. Ready to get competitive? In Squabble, you’re playing Wordle against other people, and against the clock. There’s a timer, but it’s labelled as a health metre. When you guess correctly, you heal your own damage and deal damage to other players. The winner is the last one standing. 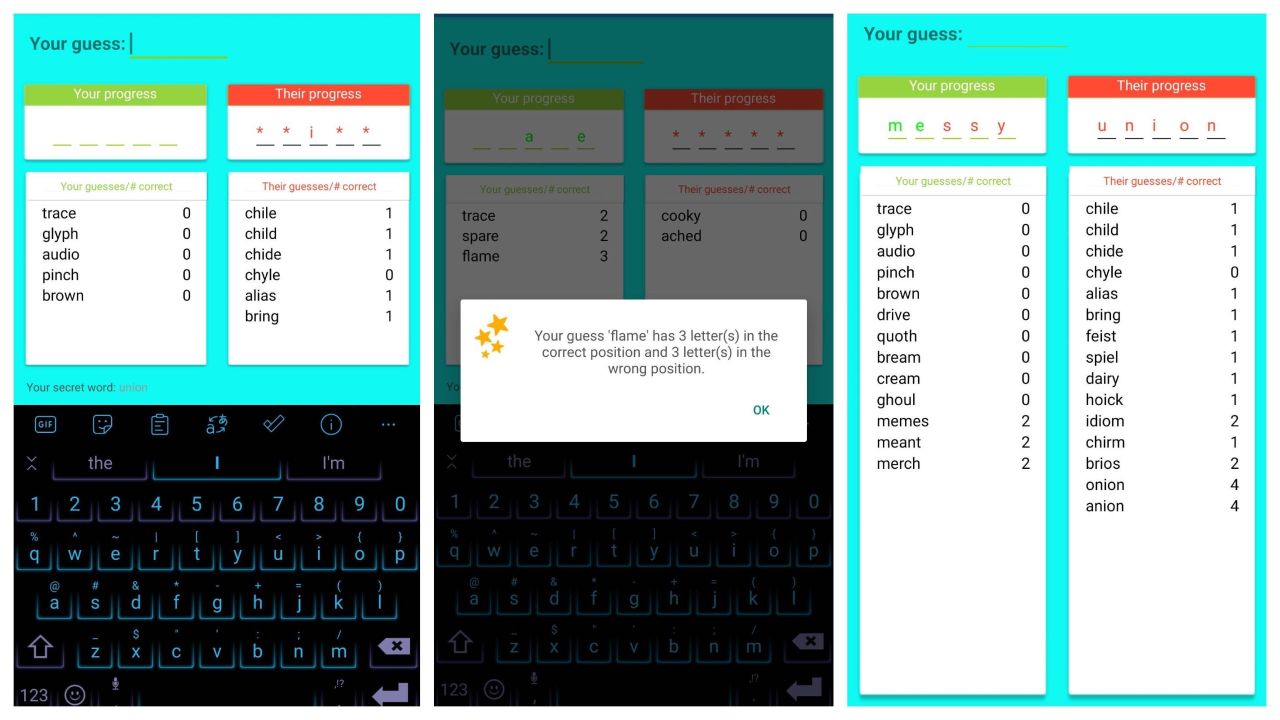 This two-player game (available on Android and iOS) is another competitive word guessing game. It predates Wordle, but the creator has added a “Wordle mode” that adopts the mechanics of the game we know and love. It’s harder, though: you’re playing blind. There are no green and yellow squares or colour coded keyboard, just a pop-up message that tells you how many letters you guessed in the correct locations. It’s definitely harder than regular Wordle. Good luck. 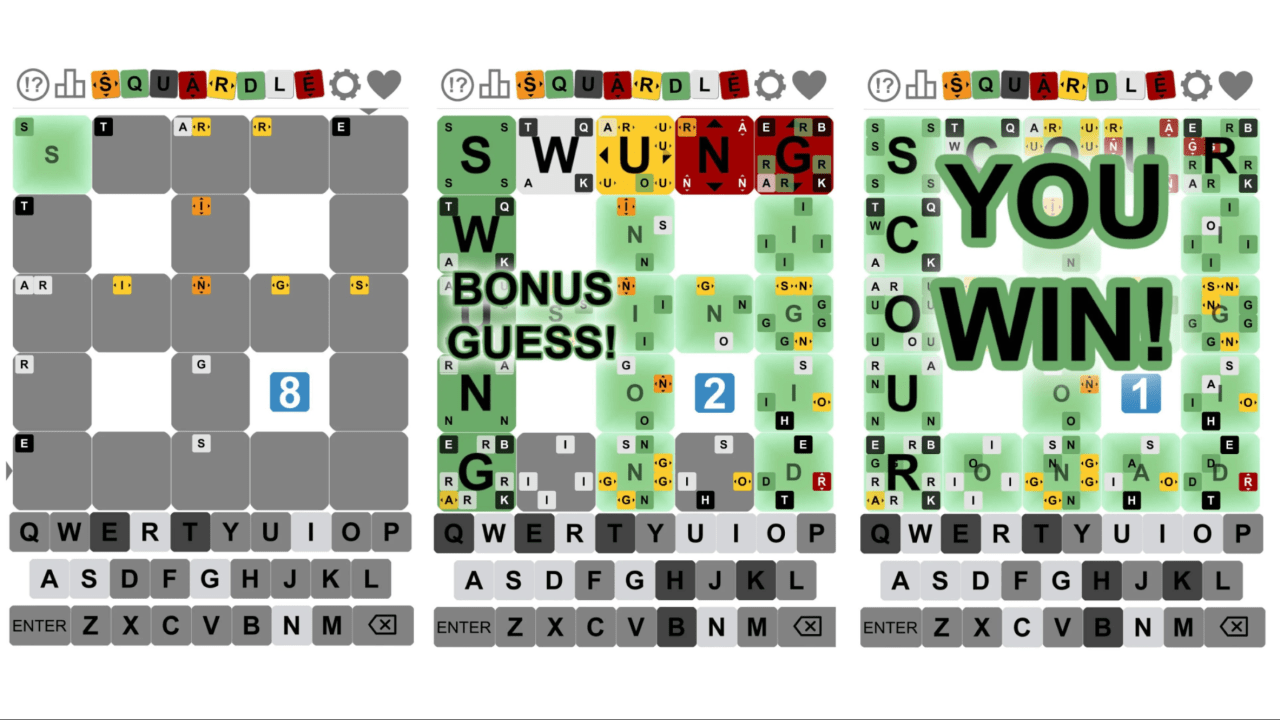 Squardle is like Waffle’s evil twin. The five-letter words are arranged in a grid, but it starts out blank. You must guess two words at once (your initial guess is entered into the first row and first column) and in return you get a flurry of colour-coded clues attached to each square. Resisting the information overload is half the fun. It is possible to win this game, I promise. While I gave a lot of thought to the rankings on this list, one game was guaranteed the dead-last spot: Antiwordle is literally impossible to win. The best you can do is prolong your defeat. It’s also maddening to play: since you’re trying to hold out from guessing the word of the day as long as possible, but luck might just lock you in to a bunch of red squares right at the beginning. I hate it. It’s great.