13 of the Most Misheard Lyrics in Music History

Don’t sing the song wrong, man. Karaoke is interminable enough. When KISS’s “Rock and Roll All Night” comes on, don’t be like my friend Mike and sing “I wanna rock and roll all night, and part of every day,” even if that is a more sensible lifestyle choice.

Substituting similar words when we can’t make out the original is called a “mondegreen,” a word coined by writer Sylvia Wright in 1954. As a child, she’d misheard “layd him on the green” from the Scottish ballad “The Bonny Earl of Murray” as “Lady Mondegreen.” Wright thought her change made the ballad better.

If you have always sung Paul Young’s “Every Time you go” as “Every time you go away, you take a piece of meat with you” don’t sweat it too much. People have been getting the words wrong since there were words, and it actually highlights something essential about human nature: We’re hard-wired to look for meaning and patterns, and if there aren’t any, we’ll fill in the blanks, sometimes with nonsense, sometimes with profundity.

According to researcher Dr. Ira Hyman in Psychology Today, these errors “provide a window into the constructive nature of perception and memory.” According to Hyman, “Most errors that people make are very reasonable. The changes almost invariably maintain the rhythm, poetic, and meaning patterns of the song.” I’d go ahead and add a qualifying “sometimes,” because some of our most common mondegreens are entirely ridiculous. The 13 examples below go back as far as the 1700s, and include both perfectly understandable mistakes and complete idiocy, as well as purposeful mondegreens, reverse mondegreens, and mondegreens that have become the “real” lyrics through repetition.

The Beatles, “I Wanna Hold Your Hand”

Don’t feel bad if you misheard them though; you’re in good company. In 1964, Bob Dylan offered The Beatles their first joint. The group explained that they’d never smoked marijuana before (but I bet they called it “grass”) and Dylan said, “But what about your song about getting high?“

John Lennon sheepishly responded, “We were saying ‘I can’t hide.’”

Dylan got The Beatles high anyway, even though they were clearly huge nerds.

The chorus of “Blinded by the Light” is one of the most widely mistaken lyrics in musical history, and arguably the most ridiculous. In Bruce Springsteen’s miniature masterpiece, The Boss clearly sings, “Blinded by the light. Cut loose like a deuce, another runner in the night.” A deuce is slang for a hot rod, so it rhymes, makes sense, and fits with the rest of the song. But then Manfred Mann’s Earth Band (Jesus, the ‘70s were stupid) covered/crapped-all-over “Blinded” and the trouble began.

Along with dozens of changes to the original (all of which made it worse*) Mann changed the “cut loose” part to “revved up,” and pronounced everything with some unidentifiable slur/accent, leading to the nearly universal misconception that the song’s chorus is “Blinded by the Light. Wrapped up like douche, another runner in the night.” Even though Mann really does seem to sing “douche,” it’s hard to believe so many people thought a hit song had that lyric.

Springsteen joked about the whole thing by saying the Manfred Mann made the song more popular by making it into a song about feminine hygiene products, and Mann said, “I don’t think Springsteen liked our ‘Blinded by the Light,’ ‘cos we sang ‘wrapped up like a douche’, and it wasn’t written like that and I screwed it up completely…Apparently Springsteen thought we’d done it deliberately, which we hadn’t, so if I ever saw him I’d avoid him and cringe away like a frightened little boy.” As you should, Manfred Mann.

Also of note: The Eagles of Death Metal version that really leans into “douche” as a joke.

*Manfred Mann’s “Blinded by the Light” is endlessly terrible — the interminable, wanky guitar solo, The haphazard replacement and changes to the lyrics, playing Chopsticks(!) as the keyboard solo — so of course Mann’s version was a massive hit, outselling the original by millions.

Various Artists, Too Many Hip Hop Tracks To Mention

XXL recently asked its Twitter followers for misheard lyrics from rap tracks, and they responded with many examples, like Fetty Wap’s “679″ that features the lyric “and I got this sewed up,” not “but we got the soda,” as many people apparently heard it.

Rap is particularly prone to mondegreens. When you combine rhythmically complex vocal cadences, esoteric, hyper-specific, regional (sometimes personal) slang, and exuberant experimentation with language, a lot of people are going to hear a lot of different things within them bars. Plus, some rappers will use a word that don’t mean nothing, like “lupid.”

Eurythmics, “Sweet Dreams (Are Made of This)“

The lyrics don’t make grammatical sense with “these,” but listen to the song: Singer Annie Lennox articulates every word precisely, and she is clearly singing “these,” or something like “thee-is,” but not “this”anyway.

Kurt Cobain wrote enigmatic lyrics and was way more interested in feedback than proper vocal articulation, so people can be forgiven for believing that “Smells like Teen Spirit” contains the words, “Here we are now, in containers” or “Here we are now, hot potatoes,” instead of “Here we are now, entertain us.”

This commonly misheard line is evidence that few of us would make very good songwriters: “Here we are now, in containers” makes a kind of sense, given the “alienation” at the centre of Nirvana’s work, but still, it would be a cliched and dumb lyric, like something Pearl Jam might sing. “Hot potatoes,” though? Give Kurt a little credit, ‘90s music fans.

In the chorus of “Rocket Man” (which is a really sad song by the way) Elton John sings “I’m a Rocket Man. Rocket man. Burning out his fuse out here alone,” but it’s very difficult to understand what he’s saying, and it doesn’t help that he changes from first to third person between lines. This led to countless interpretations like “Rocket man, burning down the street with people on,” or “Rocket Man, Bringin’ home a ham and provolone,” or my favourite, “Rocket man, Bernie Taupin sleeps with everyone.” I bet Taupin, John’s lyricist, wishes he wrote that line instead.

Hendrix apparently thought the mistake was funny and started singing “Kiss this guy” on purpose in concerts.

Electric Light Orchestra have only themselves to blame for everyone thinking this song is about a guy name Bruce trying to bring them down. But the words are “Don’t bring me down, groose.”

I’m sure you’re thinking “What the hell is a ‘groose?’” Damned if I know, man. It’s just a nonsense syllable that ELO’s Jeff Lynn threw in the song — or so the man told Rolling Stone. A recording engineer told a different story about changing the word “Bruce” to “groose” so as not to insult people in Australia, where I guess a lot of people are named Bruce. So who even knows?

Both stories sound a little sketchy to me. Lynne was a careful songwriter, and that “groooose” is the lynchpin that holds the song together. So would he really just make up some nonsense? But on the other hand, people did a ton of cocaine in the ‘70s, so maybe a groose is just a groose.

“Respect” is a killer song, and builds to that amazing break where Empress Aretha sings “R.E.S.P.E.C.T, take care, TCB.” But everyone thinks she’s singing “Take out, TCP.”

The Kingsmen’s dumb-but-glorious 1963 hit “Louie, Louie” led to one of the ridiculous examples of a common mondegreen in modern history.

Because it was impossible to make out the lyrics in the song, kids of the early ‘60s filled in the blanks and made up their own words — and they were dirty words. The rumour that the song was filthy went 1960s-viral and mimeographs with the the supposed dirty lyrics were copied and spread around schoolyards all over America.

Some kid must have snitched, because a group of concerned parents contacted the FBI. Rather than laughing them off, the nation’s top law enforcement agency launched a two-year investigation into the song, sending the record to labs where serious dudes in crewcuts played it at different speeds. The federal pigs interviewed everyone connected with the recording, except, weirdly, the singer of The Kingsmen, the only person who really knew what was sung during the single-take recording session. In the end, The FBI produced a 119 page report concluding that they couldn’t tell what The Kingsmen were saying either, so probably no one would be arrested for it.

If you’re curious, here’s one of the many dirty lyrics sheets that kids circulated, straight from the FBI’s file: 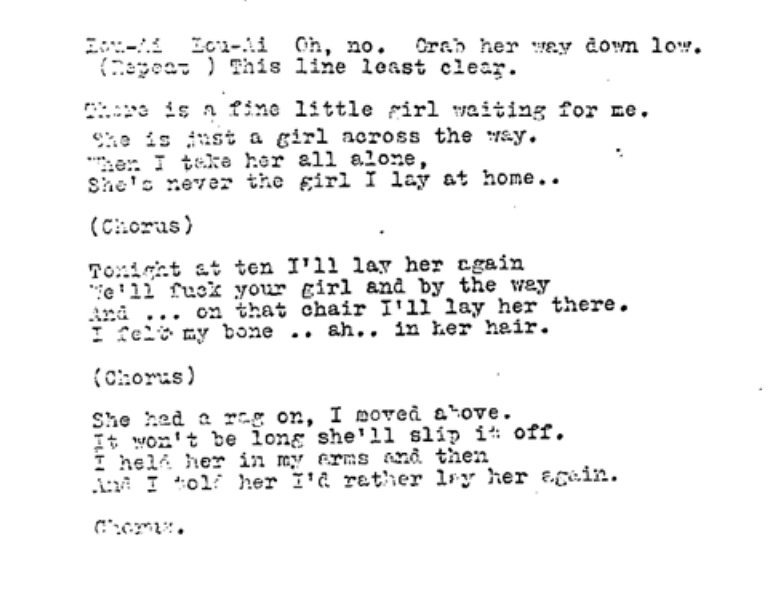 (“I felt my bone, ah, in her hair?” Our grandparent were freaks.)

An interesting post-script: The lyrics were probably not obscene, but The Kingsmen’s drummer yells the word “Fuck!” at 54 seconds into the recording because he screwed up the beat. It’s hard to hear, and the FBI apparently didn’t notice.

Quick, according to “12 Days of Christmas,” what do you get on 4th day of Christmas? If you said “four calling birds” you’re wrong!

OK, you’re not exactly wrong, but the first publication of the Christmas carol in 1780 promised “four colly birds” not “calling birds.” According to Webster’s,“colly” is an archaic British word for black, as in “coal-y,” like coal. “Four calling birds” is obviously a better line, so it stuck.

World War II party jam “Mairzy Doats” is an example of a rare reverse-mondegreen. The actual lyrics (“Mairzy doats and dozy doats and little lamsie divie, a kiddle e divey too, wouldn’t you?”) are nonsense, but the same part of your brain that inserts nonsense lyrics into some songs inserts lyrics that make sense into this one, and mae it into “Mares eat oats and does eat oats and little lambs eat ivy.”

This song is also notable because the second verse tells you how to make sense of the first — I like any song that contains its own instruction manual.

Mozart was maybe the greatest composer in history and a dirty motherfucker too. His 1786-1787 canon “Difficile lectu” is my favourite purposeful mondegreen of all time. Mozart’s lyrics are meant to sound like they’re in Latin, but they’re nonsense syllables. Mozart wrote the song to be sung by Johann Nepomuk Peyerl, knowing that the man’s accent would make the psuedo-Latin phrase “ectu mihi mars,” sound like the Bavarian German phrase “leck du mi im Arsch,” or “lick me in the arsehole.” And that the word “jonico” would sound like “cujoni,” Italian slang for balls. So the line becomes “It is difficult to lick my arsehole and balls.” Fucking Mozart, man.

The song was covered by the Insane Clown Posse.

(Do not confuse “Difficile lectu” with “Leck mich im Arsch” (“Lick My Arsehole”) or “Leck mir den Arsch fein recht schön sauber” (“Lick My Arsehole Right Well and Clean.) Those are two separate Mozart Canons. They were all written to be performed in private, “underground shit,” according to the Insane Clown Posse’s cover.)