One thing I have enjoyed about owning a house is finding all sorts of plants — that I did not plant — growing around the property. One of those surprises is an asparagus bed. It’s not a particularly productive asparagus bed, but it is delightful. Three or four stalks poke up at a time, not enough for a meal, but more than enough for entertainment purposes.

they grow up so fast pic.twitter.com/sXWLrsxQYA

I let the stalks grow and sprout (I think that’s the term?), because a couple of people told me to do so. Apparently, if I leave them alone this year, more will come back next year. I hope that is true, because I just found my new favourite way to prepare asparagus, courtesy of a Portland icon.

Chef, food writer, teacher, and famous Portland native James Beard was known for being uniquely American and making effective, flavorful dishes. His soy sauce and butter asparagus, which has been adapted for Food52 by Eric Kim, is just that. Slices of asparagus are cooked quickly in a mixture of soy sauce and butter, coating them in a salty, rich glaze and tempering the vegetable’s grassy, raw flavour.

It’s barely a recipe, more of a method, one that Kim found at the end of Beard’s 1964 memoir, Delights and Prejudices [method in bold]:

… if it is in season, I will have asparagus, either boiled quickly till tender but still crisp — and this with no embellishment save salt and freshly ground black pepper — or cut in paper-thin diagonal slices and tossed with butter and soy for two or three minutes in a hot skillet, which gives it a delightful texture.

“Paper-thin diagonal slices” is a little vague, so I decided to prep the asparagus two ways and see which I liked better. I started with a little simple knife work, cutting about four ounces of stalks on the bias to make thin, though not quite “paper-thin,” slices. 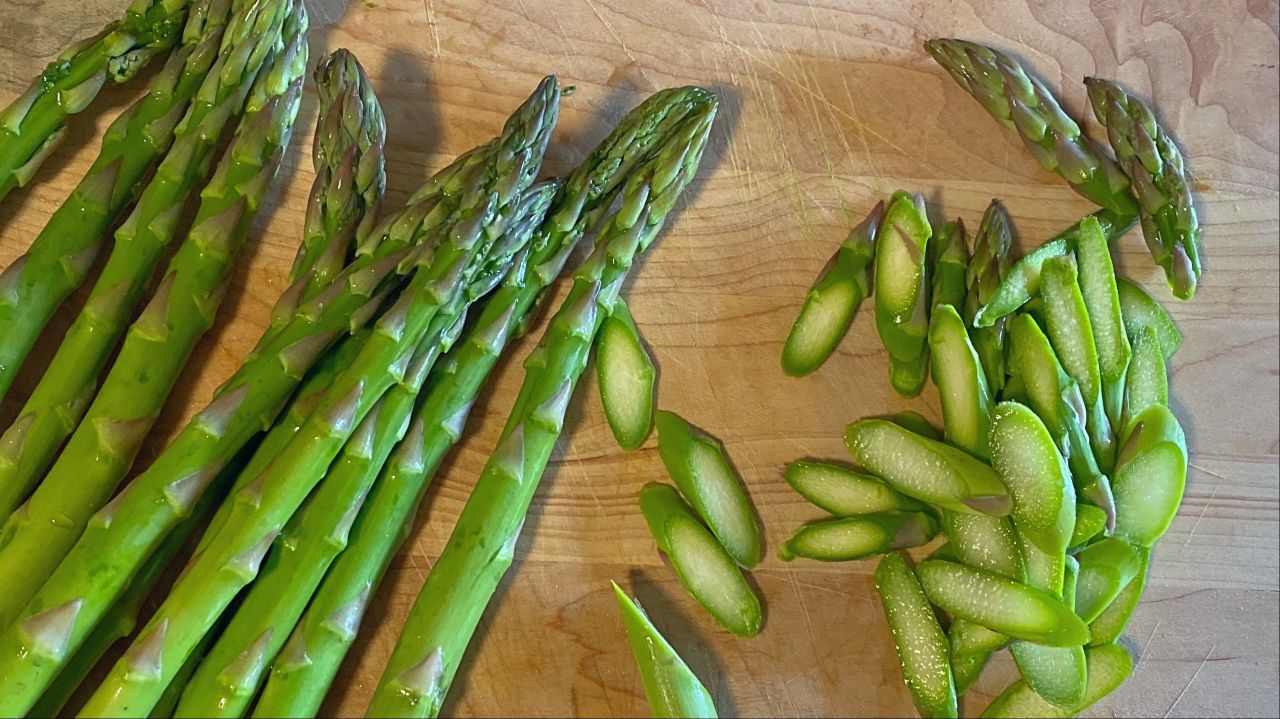 Asparagus stalks and slices on a wooden cutting board. (Photo: Claire Lower)

For the second four-ounce batch, I used a vegetable peeler to make truly paper thin slices, removing the tips first and keeping them whole. 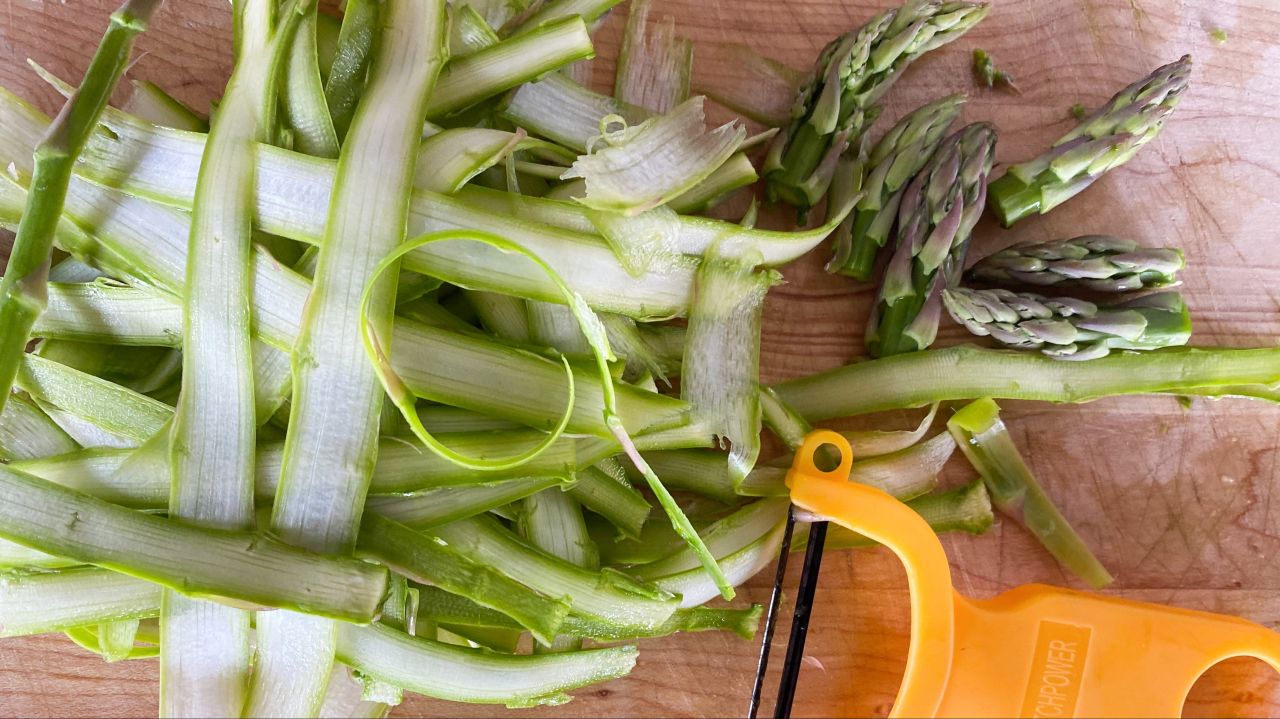 I then cooked them in a hot cast iron skillet, using Kim’s ratios for butter and sauce. I did, however, switch out the soy sauce for fish sauce, because I like my vegetables to be a little funky. This, in my opinion, was a good move. I also garnished the dish with some toasted almonds, because they look pretty and taste good. 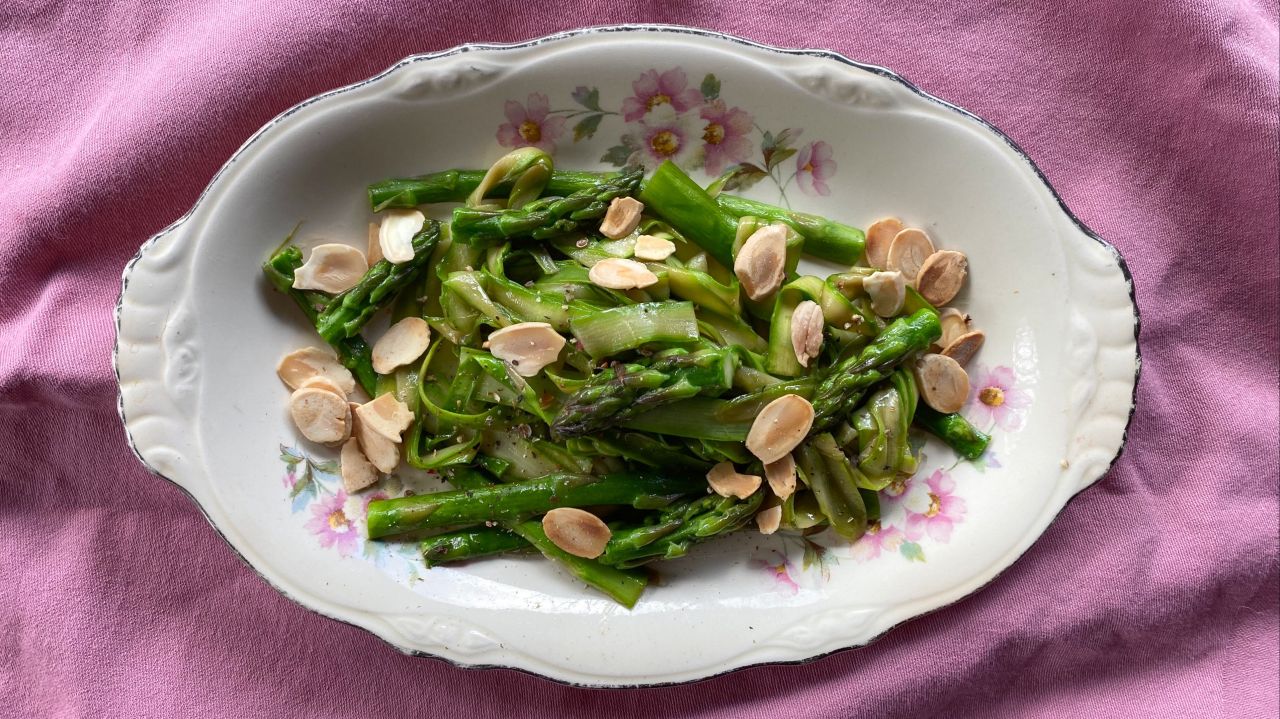 Out of the two, I actually preferred the thicker, knife-cut asparagus slices. The asparagus I had prepared with a vegetable peeler was too thin, and turned soft, almost like wet noodles. It also absorbed too much of the sauce, making it taste a touch too salty.

The thicker asparagus kept its fresh, crisp texture and absorbed just the right amount of fish sauce, resulting in a perfectly seasoned, perfectly tender-crisp bite of spring vegetable. I will be making it again (and again, and again).

Fish Sauce and Butter Asparagus (adapted from Eric Kim’s adaptation of “a very good line in Delights and Prejudices by James Beard.”)

Slice the asparagus on the bias to make thin slices around 1/4 inch (or thinner) in thickness. Heat a skillet over high heat (I used my cast iron) and add the butter. Once the butter just starts to brown, add the asparagus and cook for one minute, stirring once or twice.

Add the fish sauce, stir again, and cook for another minutes. Serve immediately and garnish with pepper and/or toasted almonds, if so desired.