A good grilled cheese is one of life’s simplest and most indulgent pleasures. It’s got a low ingredient count; all you need is bread, cheese, and some sort of fat, but those variables can all be manipulated to create very different sandwiches.

I’m a classic white bread, butter, and American cheese bitch, but I will admit there is a time for sourdough, or perhaps a little havarti (which melts quite well). But beyond swapping out basic bread and cheese for something a little bougie, there are other strategies you can employ to up your grilled cheese game.

Give it a parmesan crust 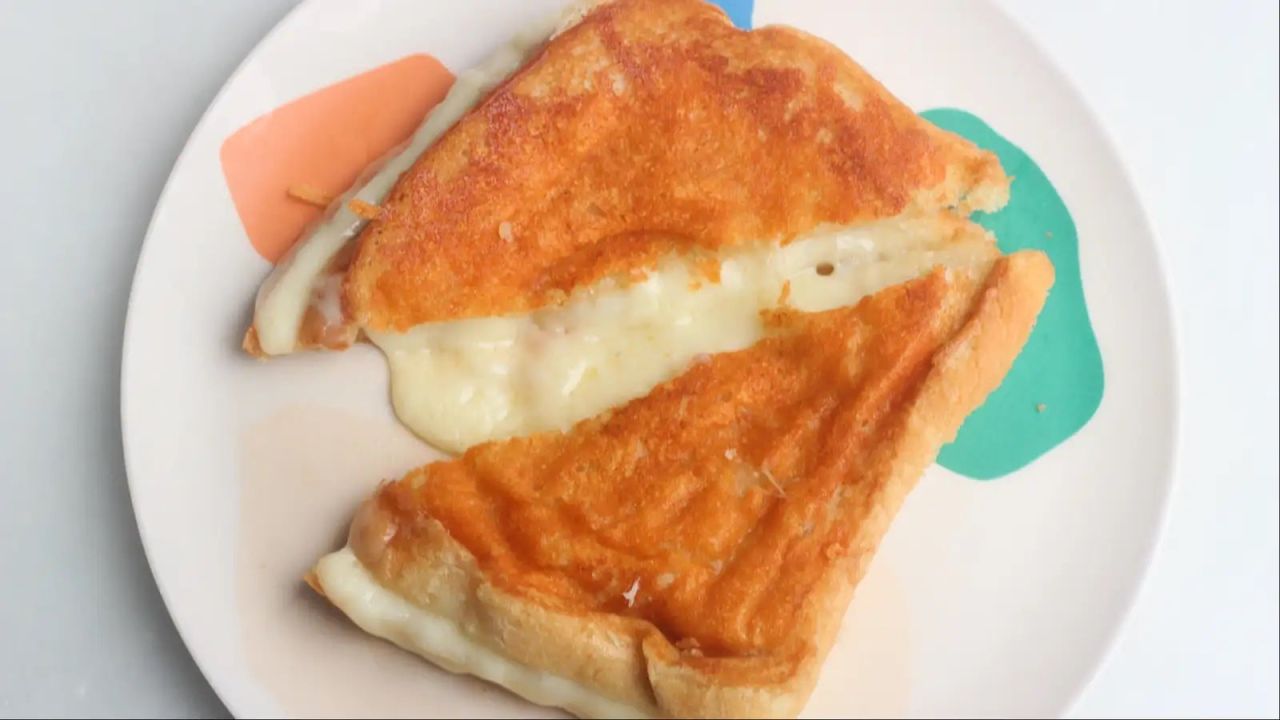 I like the cheeses on the inside of my sandwich to be soft and melty, but the hard crystal-flecked parm has its place (on the outside):

The qualities that make parmesan, cheddar, and other hard cheeses like them so poorly suited for the inside of a grilled cheese are what make them so well suited for the outside. Because of their low-ish pH, these cheeses tend to grease out and congeal, rather than melt into a soft, creamy blob (which is what you want in between your bread). But when placed on the outside of a sandwich, the fat inside the cheese renders, frying the proteins and leaving behind a lacy network of crispy, salty, fried cheese. It’s frico, except it’s stuck to bread.

Learn how to make one here. 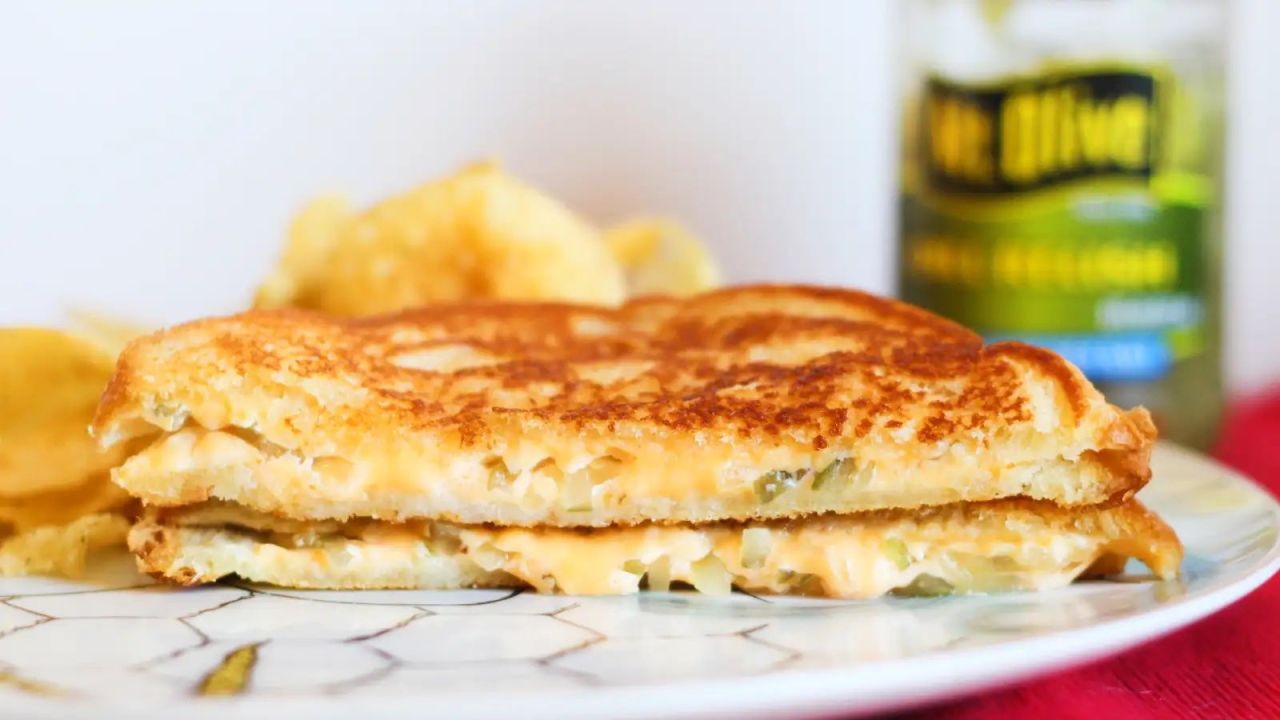 Purists will argue this is a pickle melt, but they cannot argue with the fact that spreading some dill relish inside a hot grilled cheese sandwich gives it a greasy spoon kind of edge over its un-relished cousins:

From a flavour perspective, it makes a lot of sense; acid does help cut through rich flavours, keeping your palate from getting saturated, and letting you enjoy even more gooey, melted cheese. I tested the theory, using dill relish, and I must admit I enjoyed my pickled grilled cheese immensely. The sandwich had a decidedly diner vibe to it, and I really did appreciate the sour, salty note provided by the relish. It may not be a true “grilled cheese” by everyone’s standards, but it’s a damn good sandwich. (I plan on trying this with chopped cornichons next; I expect it will go well.)

Use cream cheese as a substrate for harder cheeses 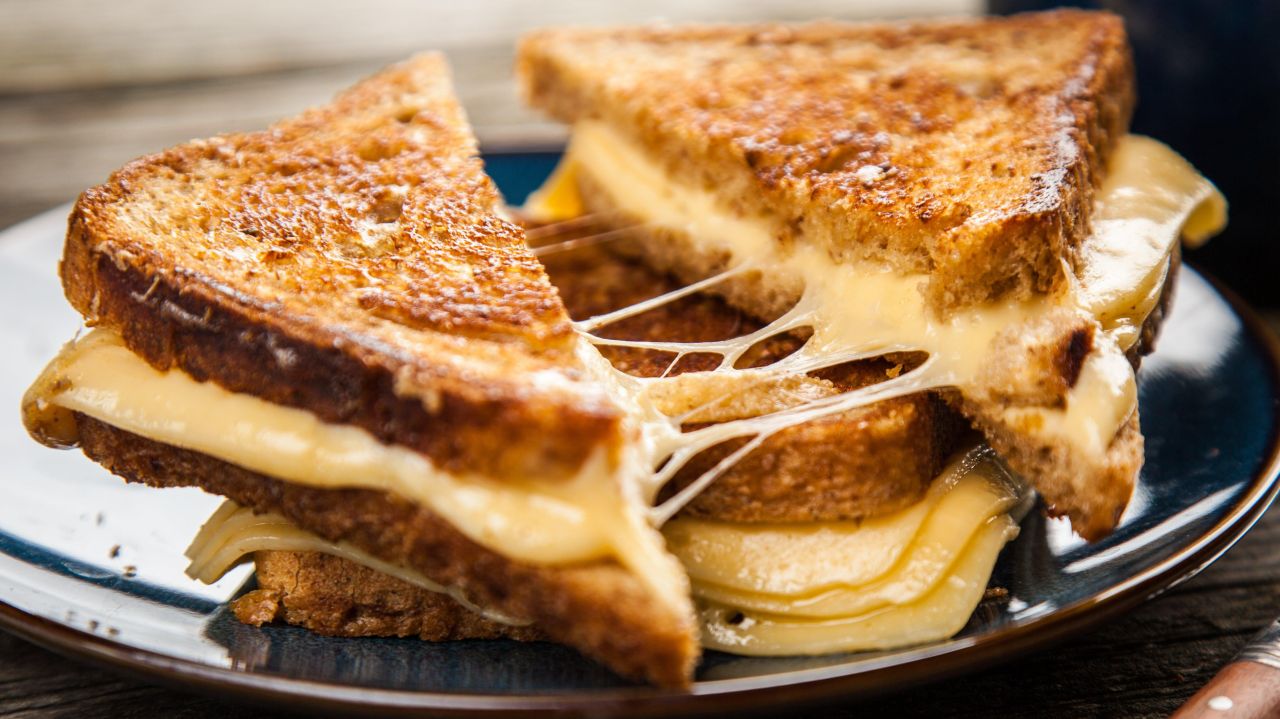 I tend to favour American, havarti, and other fairly high-pH cheeses for my grilled cheese sandwiches, simply because I like my cheese to melt. But sometimes a hard cheese has better flavour. Instead of trying to force a harder cheese to melt evenly (something not in its nature), you can shred them and suspend them in cream cheese:

You see, if you do it right, you don’t even realise the cream cheese is there. It’s main role is to suspend harder, shredded cheeses and facilitate a super even and creamy melt, a method Stockwell picked up from the delightful Cowgirl Creamery Cooks (which also advocates the use of three different cheeses):

For the creamiest middle possible, one of those three cheeses should be a soft fresh cheese. Soft cheese “acts as a suspension; just as egg whites suspend the heavier particles in a soufflé, so does the soft cheese suspend the grated cheese and distribute it more evenly across the bread.”

Make your own melty slices with sodium citrate 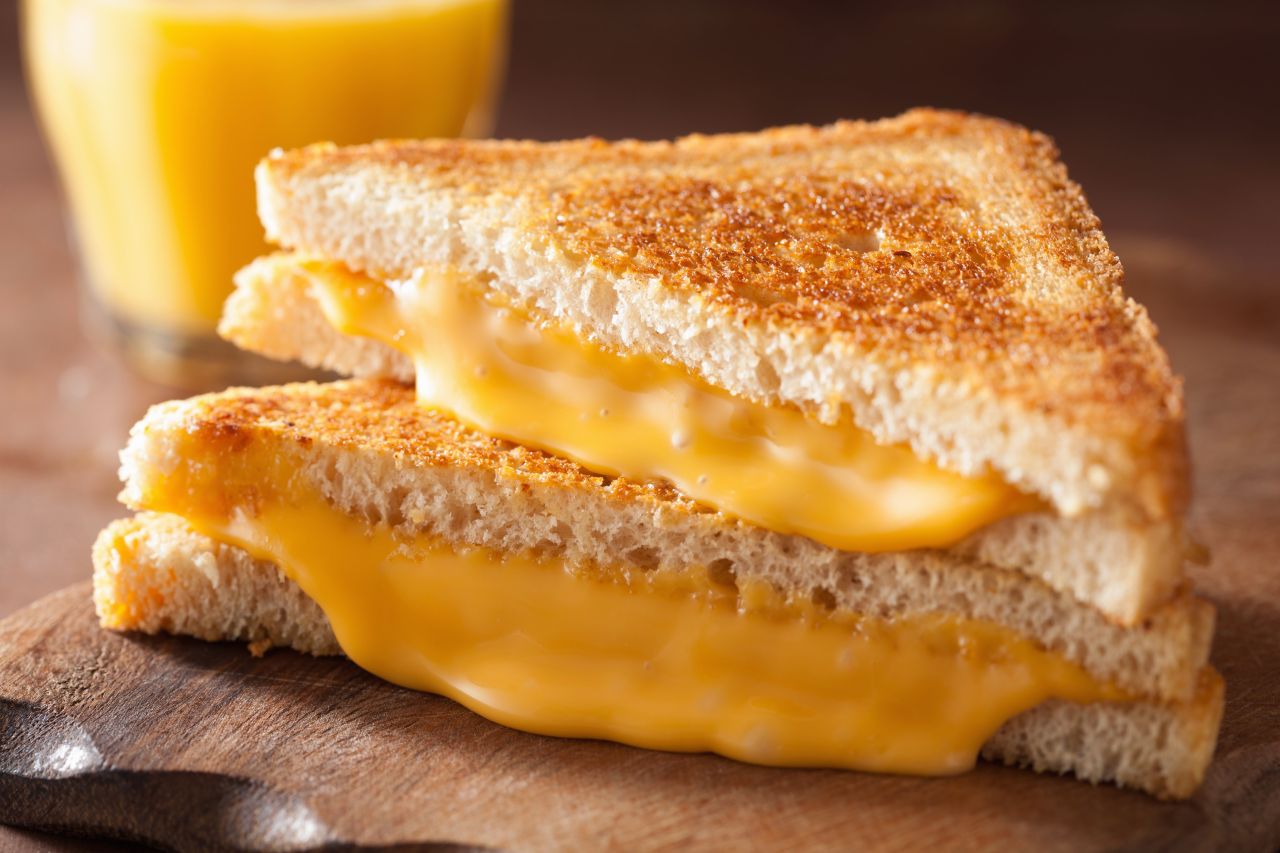 If you want to go a little mad scientist, use melting salts (and an immersion circulator) to create a cheese slice that melts like American but tastes like cheddar:

Sodium citrate — which we’ve used before to make silky smooth nacho cheese sauce — and sodium hexametaphosphate are additives known as“melting salts,” which manufacturers use to keep oil and proteins from separating as cheese melts. (If you’ve ever melted some cheddar, you’ve seen the oil run off and pool; melting salts prevent this.) To get the melting salts incorporated into your cheese of choice, you’re going to need to melt, mix, and reform. This is most easily accomplished using an immersion circulator, but you can also rig your own sous-vide like cooker using a beer cooler or on the stove.

Use inside out dinner rolls instead of bread 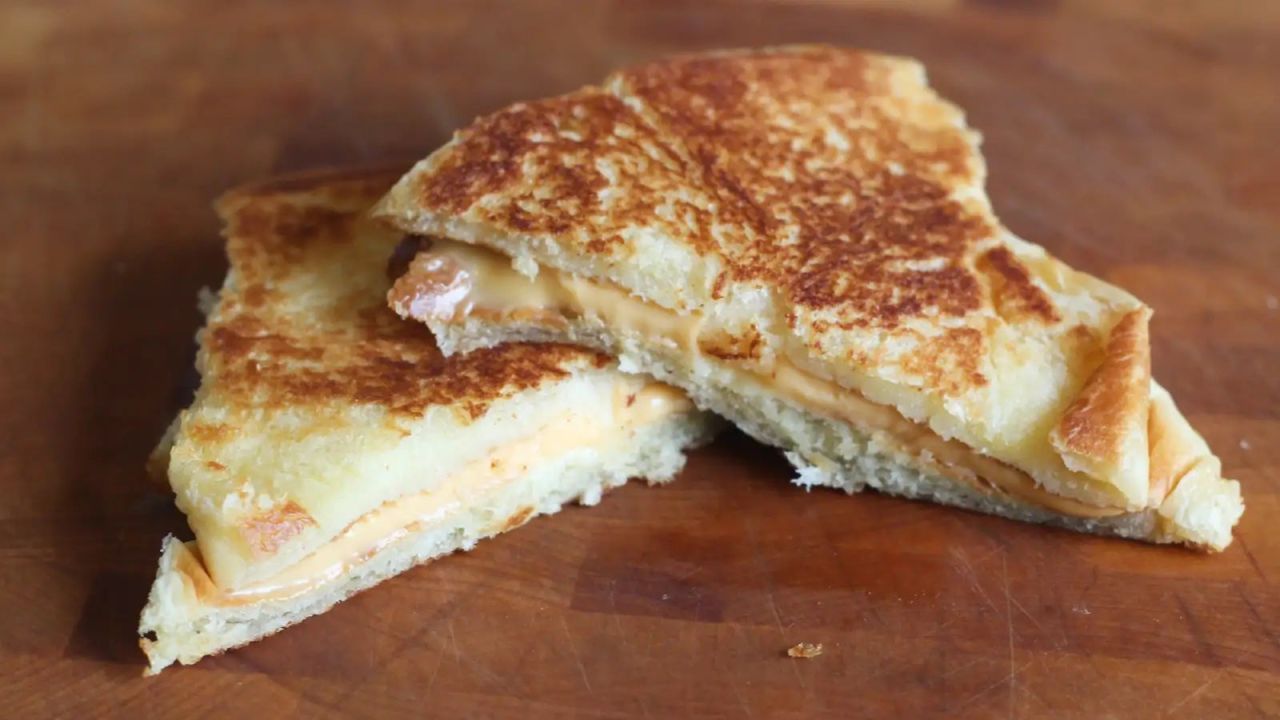 The outside of a dinner roll is already browned, and thus not a good candidate for grilling. But, if you turn the roll (or several rolls) inside out, their fluffy, white exteriors are exposed, and that stuff absorbs butter like a dream, and is perfect for grilling:

Just slice them in half, keeping as many together as possible (like we did for these sliders) and flip the slices around. Place your cheese of choice inside the two inside out halves, slather the fresh new outsides with butter, and grill as usual. (I find this works particularly well with King’s Hawaiian rolls, especially if you smash them down real forcefully with a spatula.)

Grill both sides of the bread 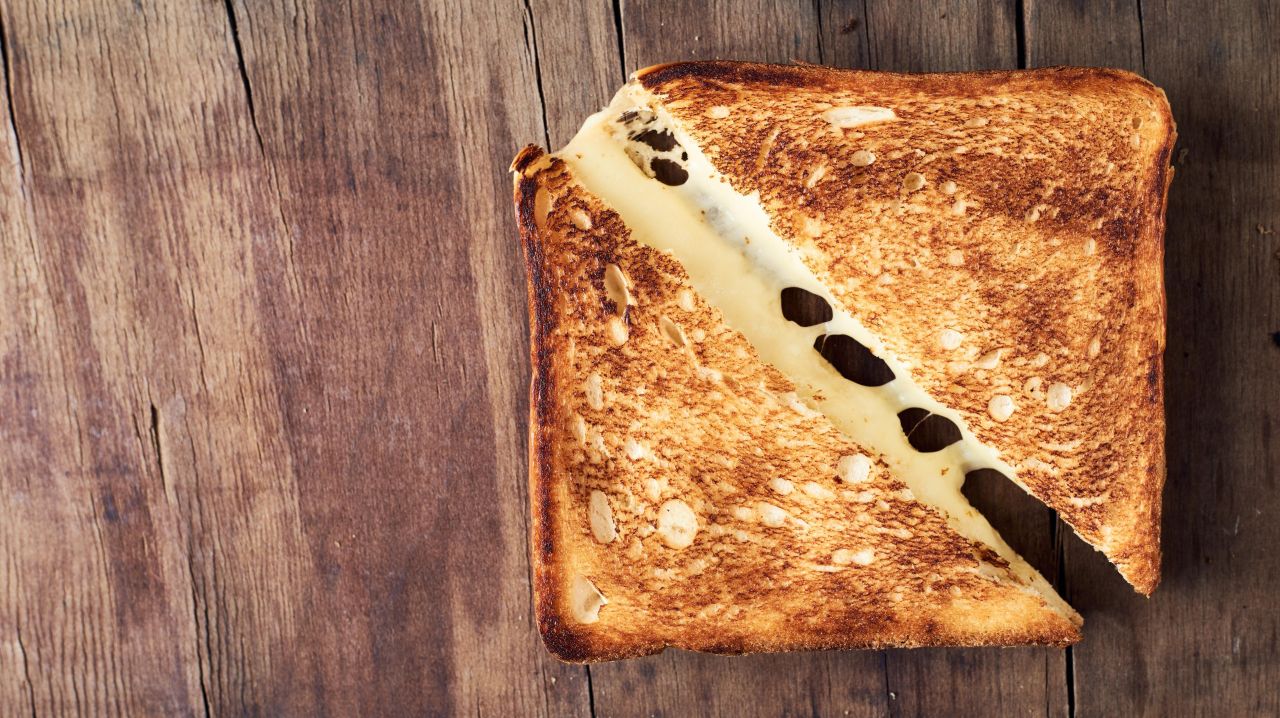 Why add texture to just one side of your bread when you could increase the crunch and browning with a tiny bit more grilling?:

The best method I’ve ever seen for making a perfect grilled cheese comes from Adam Kuban. His secret? Grill the bread on both sides. That’s right. Grill two slices of bread in butter, flip’em over so that the browned sides are facing up, add your cheese, and close your sandwich so that the cheese is sandwiched between the browned surfaces. Not only will this get you better tasting bread infused with more butter, but it’ll also give your cheese a head start on getting extra-melty.

Turn an everything bagel inside out 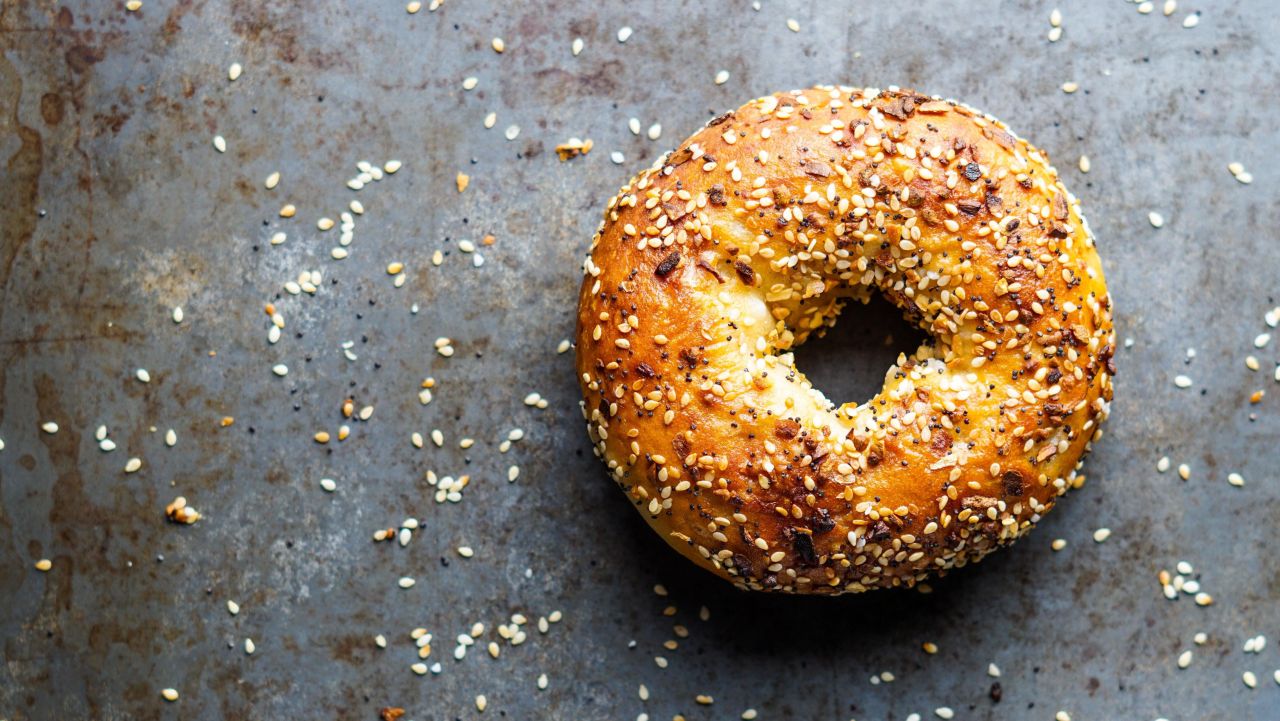 An everything bagel’s shape and seasonings make it a poor candidate for grilling, but again, turning the bread inside out gives us something to work with:

Inspired by the inverted grilled cheese sandwich situation at Sadelle’s in New York, Tasting Table recommends cutting a chewy everything bagel in half, flipping it inside out, stuffing it full of American and Muenster (or maybe a little cream cheese?) and grilling it up, keeping all of those tasty seeds and spices inside, where they may mingle with gooey, glorious cheese. Simple, easy, and super delicious.

Grill it on an actual grill 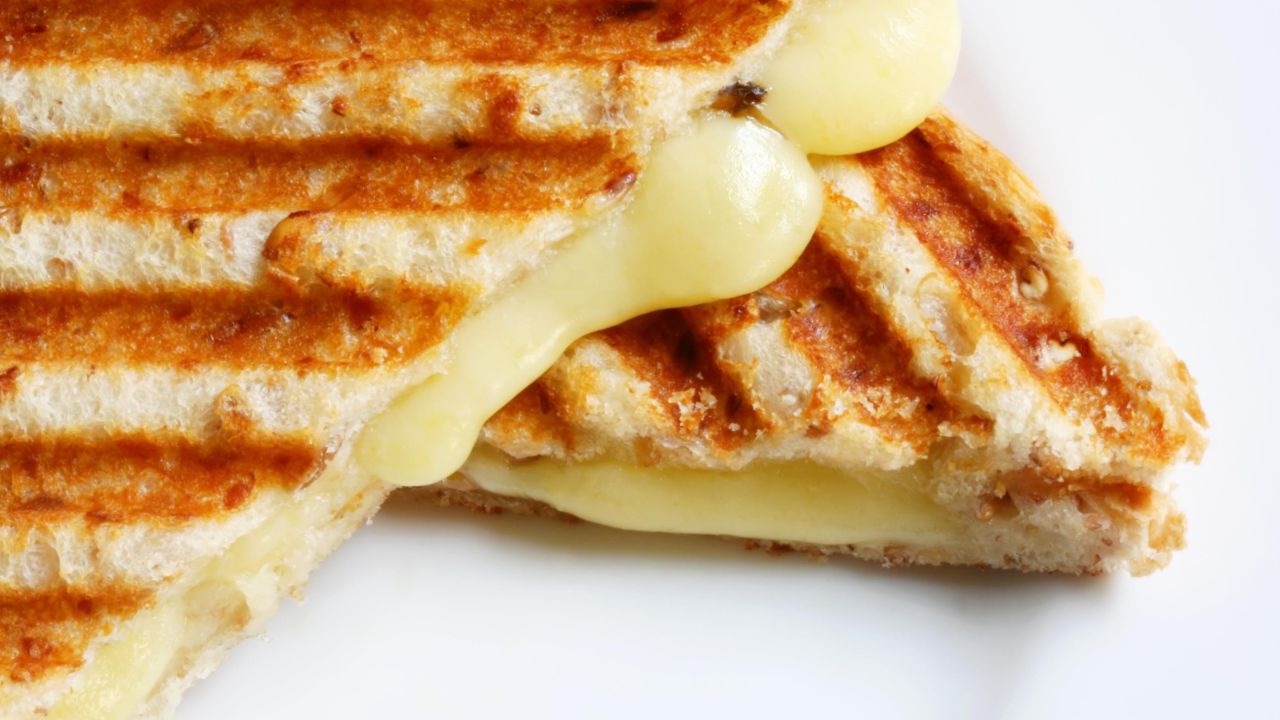 In true Meathead fashion, Meathead Goldwyn of AmazingRibs.com cooks his grilled cheese sandwiches on the grill, and was nice enough to share his process with me:

Whatever’s in multiples in the cheese bin. I taste my way around the cheese department; I’m always buying interesting cheeses. I usually start with a cheddar, and we keep sliced Swiss cheese and Colby and pepperjack, and I might make a mishmash of all of ‘em. I also prefer to grill my grilled cheese. I mean, come on now. It’s called “grilled cheese,” and you’re talking to Meathead here. I love to make it on a nice thick Texas toast, and I use mayonnaise on the exterior, and I cook it on the grill, just right on top of the grill and flip, flip, flip. It gets golden with a couple of good grill marks and has a little smoky character. It’s delicious. I have a gas grill right outside my back door and my back door is just a few steps from the kitchen. So it’s no fuss, no muss; just fling open the door, toss it on the grill.

Do NOT cook it in mayonnaise 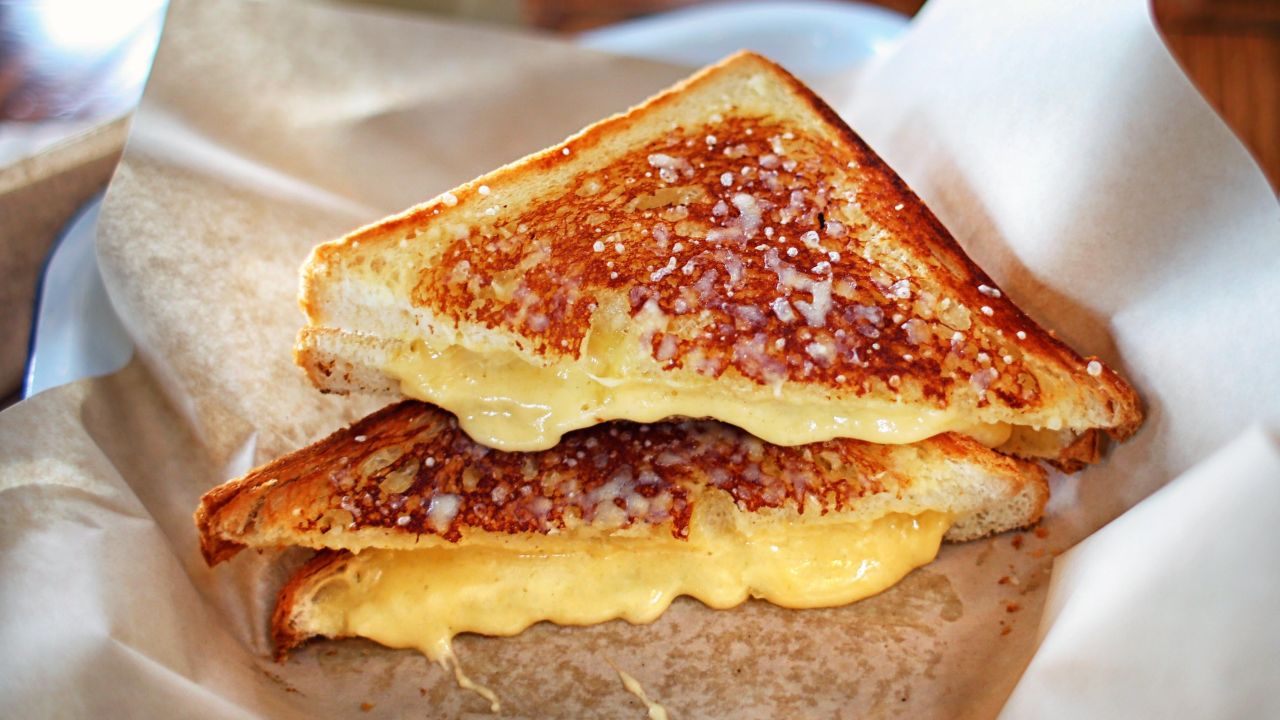 You know I love a good mayo hack, but cooking a grilled cheese sandwich in mayonnaise instead of butter is not one of them. You can read my full screed against the practice here, but to sum it up:

I want to like it. In theory, it makes sense, and I want to believe that mayo is some sort of miracle condiment that makes everything it touches better. Mayo’s higher smoke point gives the cheese more time to melt (which I have never needed), and it does crisp up nicely, but it just doesn’t taste like a grilled cheese. Melted butter tastes good. Melted mayonnaise tastes like greasy nothing. Give me butter. Give me flavour.

If you prefer mayo because it spreads easier, or if you forgot to set out some butter to soften, I have an elegant solution:

There’s a very easy way to butter your bread with straight-from-the-fridge butter: Just melt it in the pan first.

This is actually how my stepmom butters all her breads, but it works extremely well with a grilled cheese. Take a tablespoon or so of butter, melt it over medium-low heat, then place a piece of bread in the pool of butter and swirl it around to coat. Remove it from the pan, set it aside (butter side up), and add a little more butter to the pan before adding your next piece of bread. Swirl that piece around in melted butter, add your cheese slices, then place the first buttered slice (butter side up) on top of the cheese. Cover the pan for a minute to help any harder cheeses melt (if you have insisted on using them), and fry and flip until both sides are golden brown.