8 Ways You Can Make the Windows 11 Taskbar More Useful

The Windows 11 taskbar is one of the new operating system’s best features — elegant, minimalist, and visually distinct. Yet while we’re generally fans of the redesign, there are ways to make it better. For example, by default, you can’t move the taskbar to any position you want, or even change its size. But you don’t have to live with it as is — there are ways to play with your settings to set up the taskbar exactly the way you want it.

Remove bloatware from the taskbar 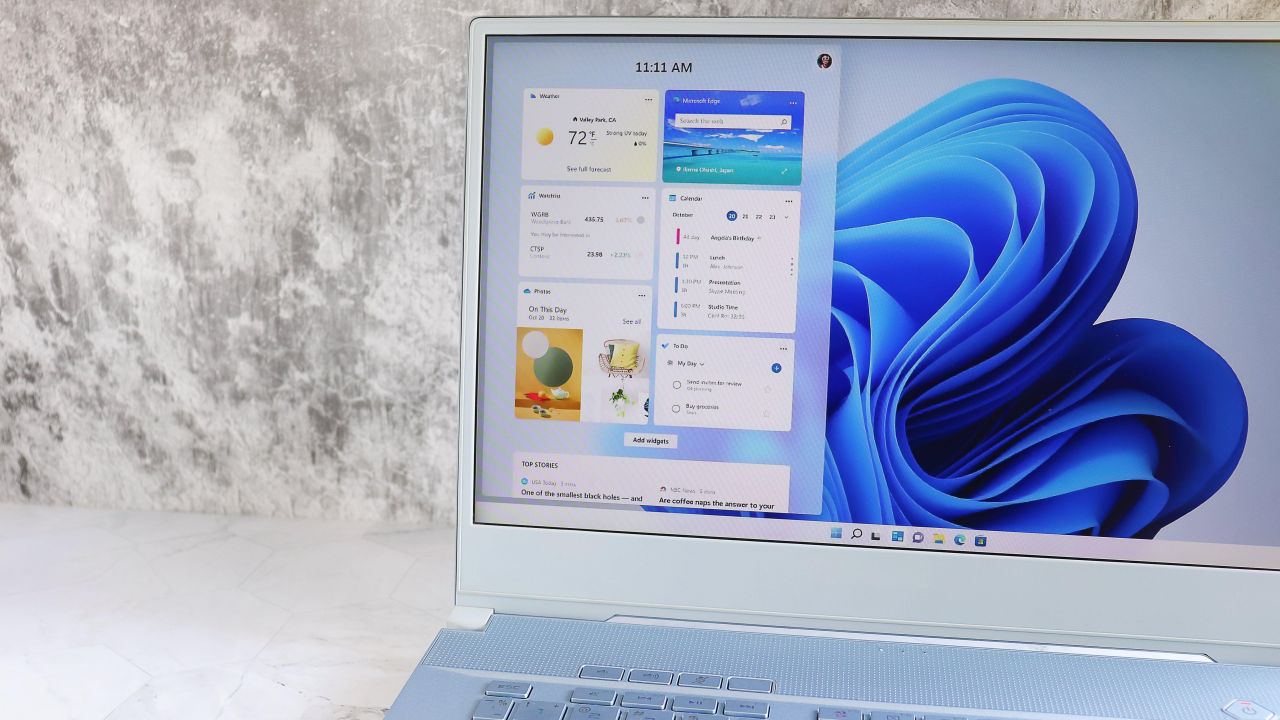 The Windows 11 taskbar comes preloaded with extra buttons and features that you’ll never need. To remove anything you don’t want to be there, right-click the empty part of the taskbar, and choose “Taskbar Settings.”

“Widgets,” and “Chat” will be enabled by default; uncheck the ones you don’t need to remove them from the taskbar.

Pin any app to the taskbar 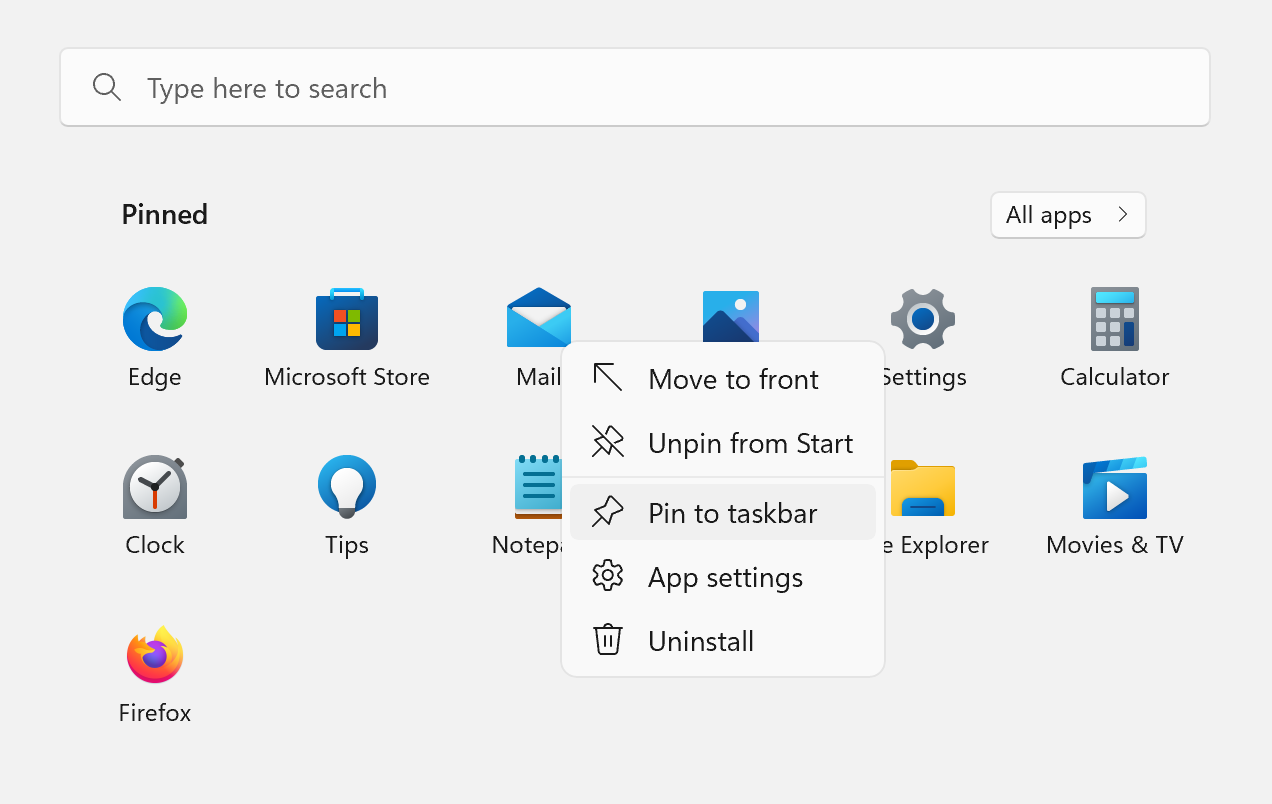 Windows 11 doesn’t yet support the taskbar drag and drop feature from Windows 10, which let you simply drag an app icon to dock it within the taskbar. As a workaround, go to Start menu, right-click the app of your choice, and click the “Pin to Taskbar” button. You can pin any currently open app by right-clicking the app icon and choosing the “Pin to taskbar” option.

Align taskbar icons to the left 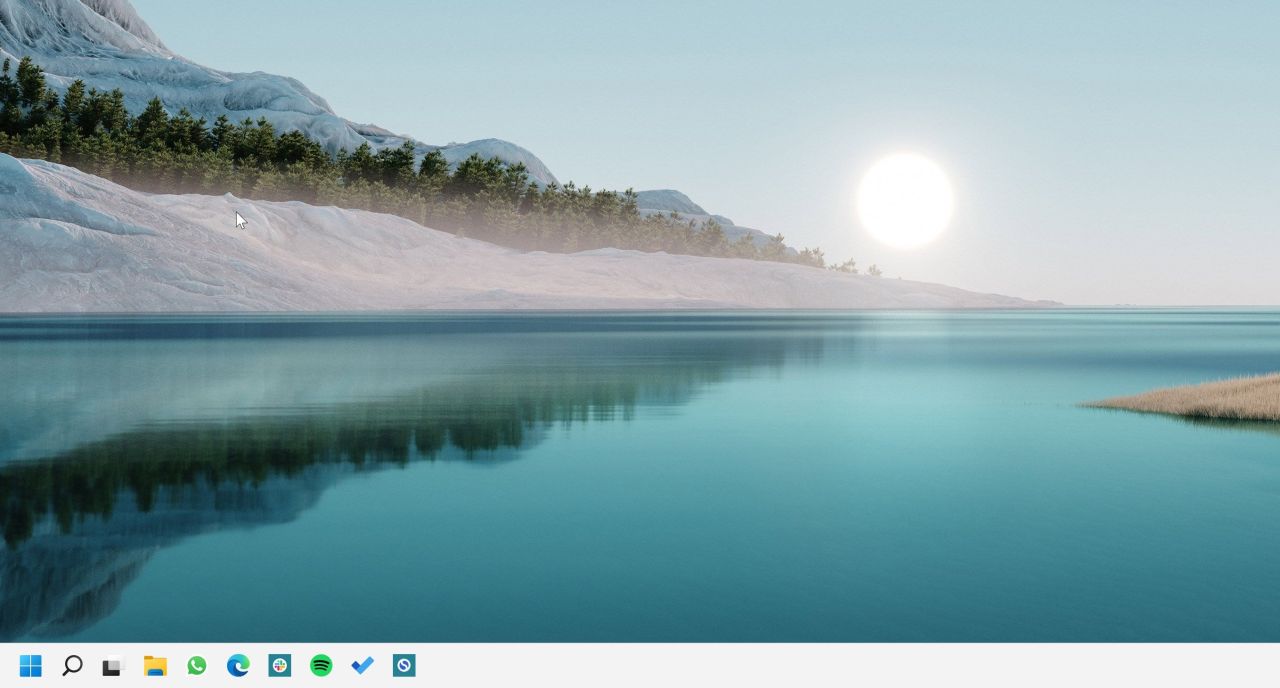 Missing the Windows 10 taskbar layout? Microsoft lets you change the alignment of taskbar icons. Right-click the taskbar, go to “Taskbar Settings,” and from Taskbar Behaviours, choose the “Left” option in the “Taskbar alignment” feature. 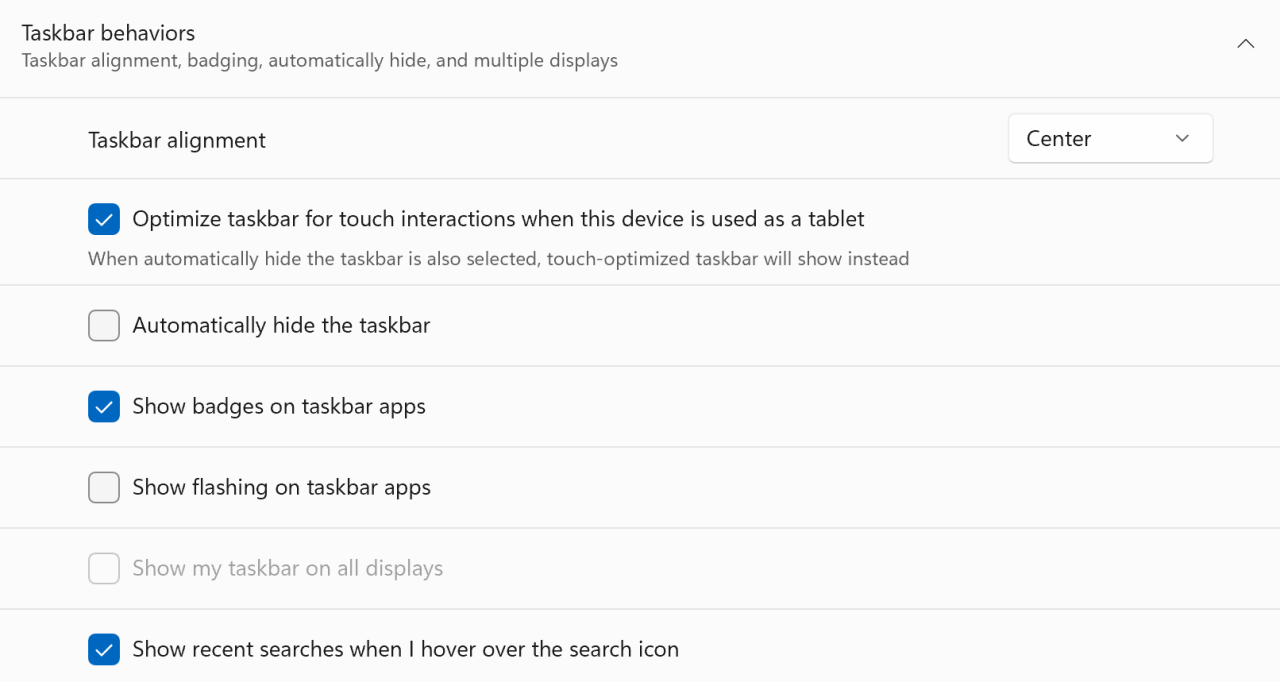 Windows 11 has a separate section that lets you customise how the taskbar behaves. Right-click the taskbar, click the “Taskbar Settings” button, and select the “Taskbar Behaviours” section.

If you’re using a touchscreen laptop, or a small screen device, you might want to hide the taskbar for more screen space. If so, enable “Automatically hide the taskbar.” Now, the taskbar will only show up when you move your cursor to the bottom of the screen or when you swipe up from the taskbar area.

If you use multiple displays, use the “Show my taskbar on all displays” feature to enable or disable the taskbar across all your monitors.

Change the accent colour in the taskbar 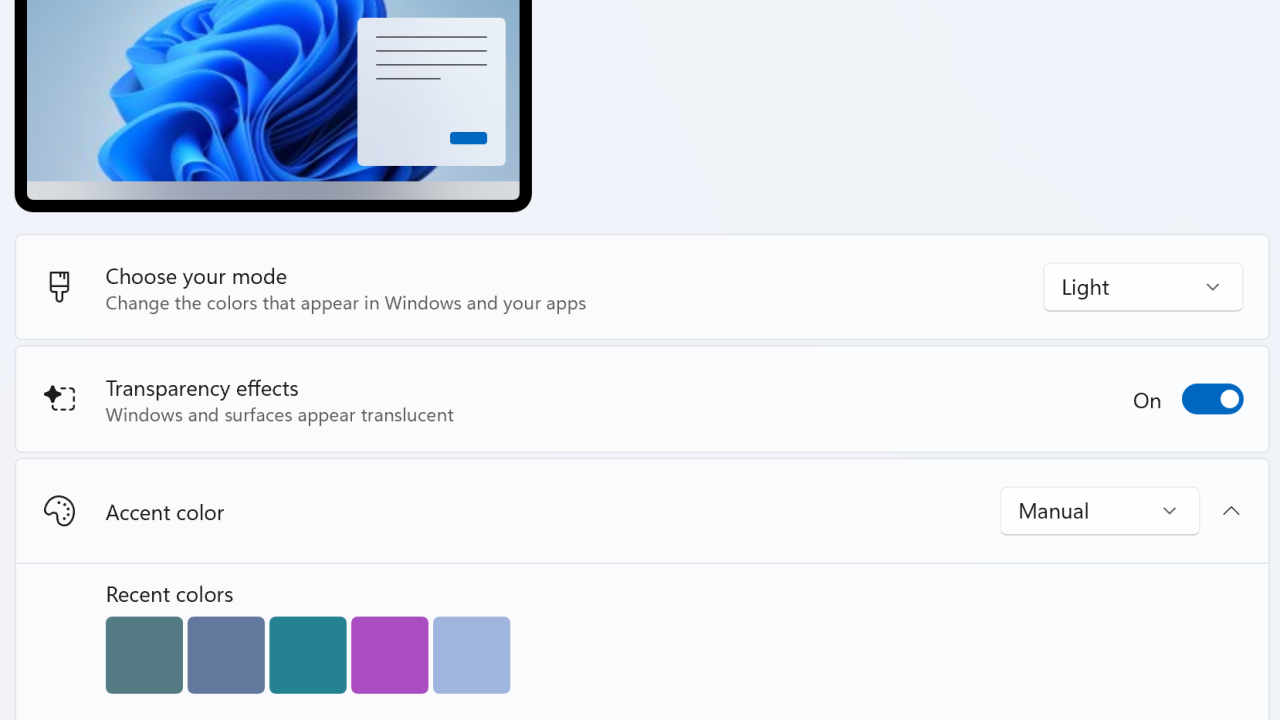 You can independently change the accent colour of the taskbar (and the taskbar only). It’s part of Windows 11’s new theming engine. Go to Settings > Personalisation > Colours and choose an accent colour. Then, scroll down and enable the “Show accent colour on Start and taskbar” feature.

Put the taskbar at the top of the screen 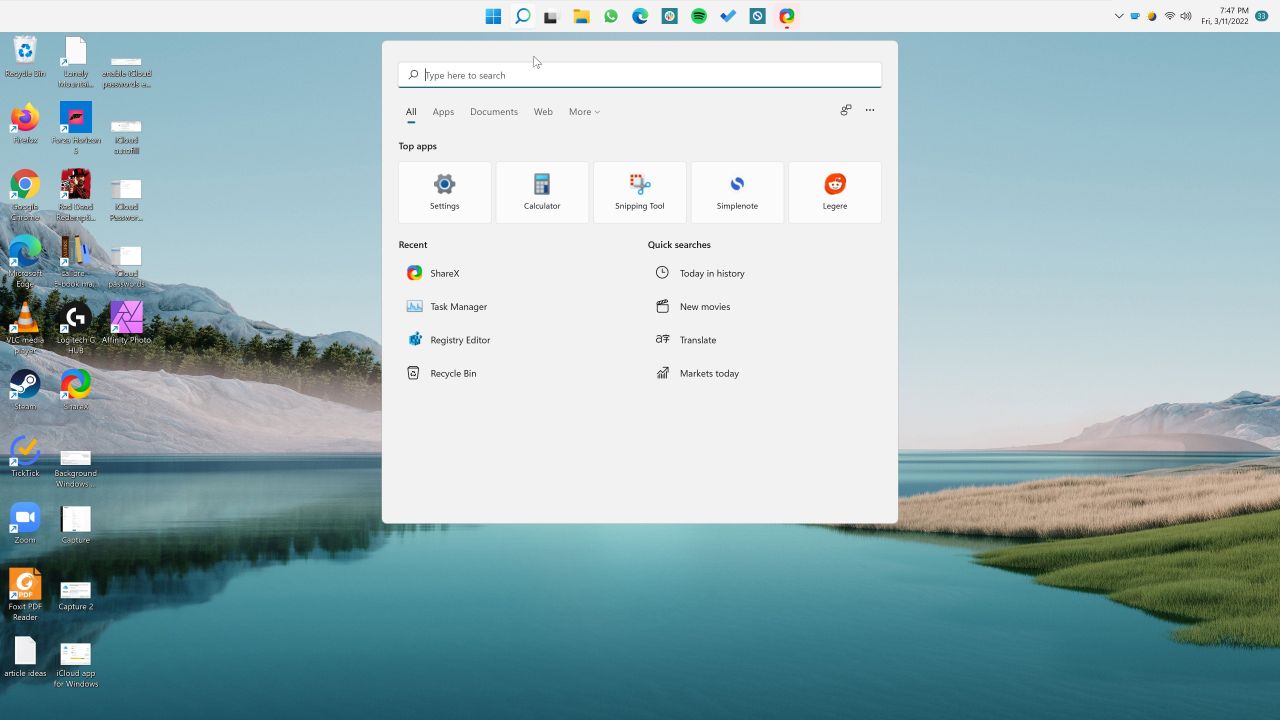 Microsoft has docked the taskbar to the bottom of the screen and won’t let you move it willy-nilly. It is impossible to put it on the left or the right sides of the screen, but you can move it to the top of the screen using a registry hack.

Open Start > Registry Editor and enter the following location in the top bar:

In the “StuckRects3” folder, double click the “Settings” file. This will open the “Edit Binary Value” window where you will see a table full of values. Go to the second row, and find the fifth value from the left. By default, this reads “03.”

Place the cursor to the right (end) of this value, press Backspace once, and change the value to “01.” Click the “OK” button and exit the Registry Editor app.

Next, open the Task Manager app and restart Windows Explorer.

Make the taskbar smaller or bigger

Another big change in the Windows 11 taskbar is the fact that you can’t easily resize it, whether you want it to be larger or smaller. But again, though there is no settings menu where you can change this, you can do it using a registry hack.

Go to Start > Registry Editor and enter the following location:

Right-click in the empty space and choose New > DWORD (32-bit) Value. A new entry will be added to the bottom of the “Advanced” folder. Rename it to “TaskbarSi.”

Double click the “TaskbarSi” file. In the “Value Data” field, enter “0” if you want a smaller taskbar and “2” if you want a larger one (“1” being the default option). Click the“OK” button.

Restart your PC, or restart Windows Explorer from the Task Manager. You should see your taskbar appear at its new size. 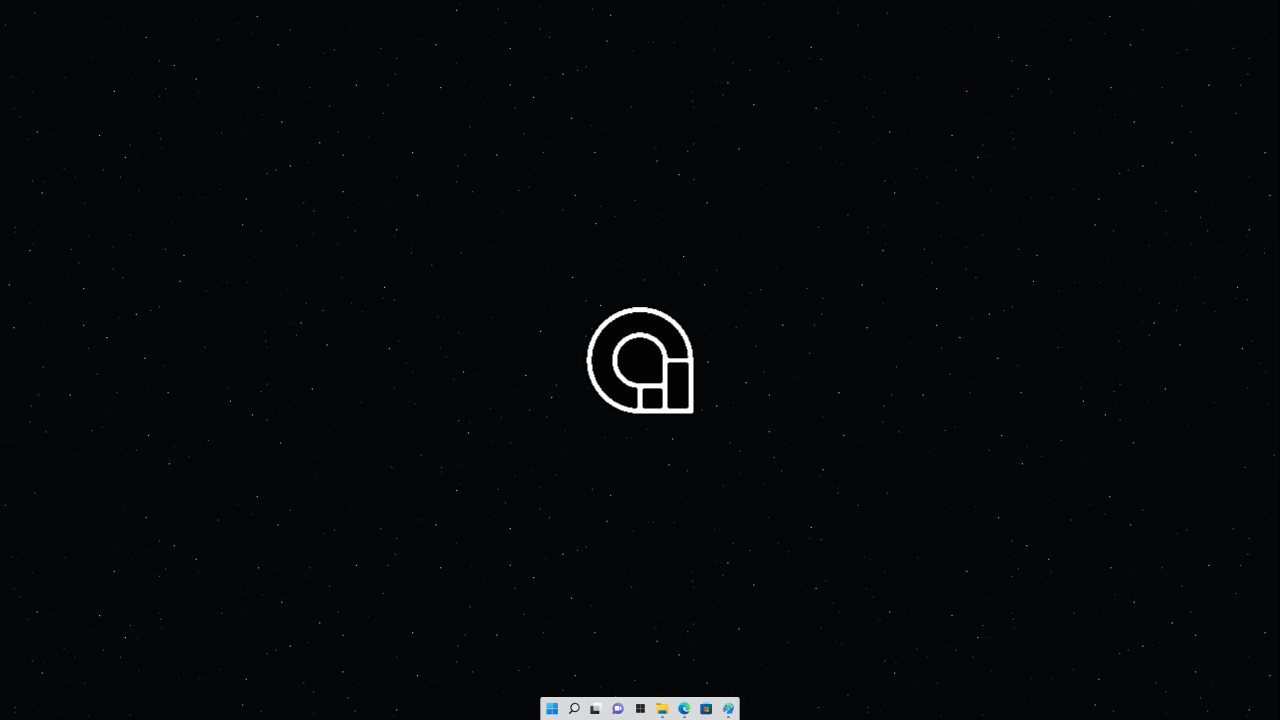 The free and open-source app is still under development and adding additional customisation features.