You Should Try Quordle If You’re Too Good at Wordle

Within seconds of finishing his first Wordle game, my 12-year-old son opened a new tab and googled “infinite Wordle.” There are, of course, many ways to play Wordle over and over again. (Here’s one; here’s another.) What’s better, though, is playing multiple Wordle-style puzzles at the same time.

(If you’re out of the loop: in Wordle, you have six chances to guess a five-letter word. Green squares mean a guessed letter is correct; yellow means that letter is in the word but not in that position. That’s it, that’s the whole game.)

Dordle is the first simultaneous Wordle variant I was introduced to. It’s a double Wordle: each of your guesses is entered for both puzzles at the same time, and your goal is to solve both in seven guesses or less. I’ve been playing the daily Dordle since puzzle #0002, but today I learned I’ve been missing out on Quordle, which allows you to play four puzzles at once. In just nine guesses.

How do you win at Dordle and Quordle?

First of all, both of these games feature a “daily” puzzle that is the same for everyone, and a “free” or “practice” puzzle with a different solution every time. So, yes, the truly addicted can play four puzzles at a time all day long. If nothing else, you can take advantage of practice games as you’re learning the ropes.

Now, on to the strategy. No matter how many puzzles you’re solving, I like to think of guesses as answering one (or more) of three questions:

It’s a mistake to play the game with #3 as your only strategy. Pretty quickly you’ll discover exploratory guesses are important, and you’ll pick starter words that answer question #1 efficiently. (My mnemonic: ETAOIN SHRDLU, pronounced “Edwin Shirdloo” as if it were a name, is a list of the arguably most common letters in English. My starters always use letters from this list.)

Simultaneous Wordles require lots of #1 and #2 guesses. You need to constantly ask yourself: what information can I gather with this guess? The same guess can do double duty for different puzzles at the same time: maybe you combine a yellow from one word (#2) with some brand-new letters (#1) and a yellow from another word (#2 again).

You definitely don’t want to do a #3 guess until you’re pretty sure of the answer, since your attempted solution on one puzzle is a guess that will probably be useless for the other(s).

How to solve four Wordle puzzles at once

Alright, let’s look at this in action. The puzzle I’m solving (shown in the image up top) is a “practice” puzzle, so you don’t have to worry about spoilers.

We start with TRASH, and get hits on three of the puzzles. Next up, to start making progress on the upper right puzzle, I choose a word that uses common letters but doesn’t repeat any of the ones we just tried: CLINK.

Still only one yellow in that upper right puzzle, but we’re in a really good position now on the bottom two puzzles, which now each have four letters confirmed — some of them are even greens. Three on the top left isn’t shabby either. As we put together future guesses (#2’s and #3’s for the puzzles where we’re close), let’s keep feeding in new letters (#1) to help with the top right.

We can probably solve one already: the lower left has to be CHAS_, giving us either CHASE or CHASM. I get cocky and go with CHASE, which is wrong, but at least gets an E into play. So then I solve with CHASM, and then I see what I’ve learned from introducing that E.

The lower right is _ _ A_E with an S, a T, and a K in there somewhere, so it’s either STAKE or SKATE. Rather than use one of those as my next pick, I want to knock out a couple possibilities. I still don’t know where that L goes in the top right puzzle, and I’d like to get another unknown letter or two into the mix. It also wouldn’t hurt to stick an A in there somewhere to help us out on the top left, where we know there’s an A but we don’t know where.

I settle on ATOLL, which gives valuable clues for all three. We now know that the top right puzzle has an O, and we know several places that the L cannot be. We know that the top left must be either _AIS_ or _ _ISA, and my gut is saying DAISY. We have also confirmed that the lower right must be SKATE and not STAKE.

So I guess SKATE and then DAISY, which reveals a Y at the end of the top right puzzle. We don’t have many letters to go on, but the fact that we’ve guessed so many, with so few hits, suggests there might be at least one double letter. It can’t be a double L, since there are no Ls in the second and fourth spots, so I consider doubling up a letter I haven’t guessed yet. What could fit in LO_ _Y? All I can think of is LOBBY — yup, that’s it. Four puzzles solved in eight guesses, with one to spare. The little squares won’t necessarily fit in a tweet, so you also get a little shareable graphic that looks like this: 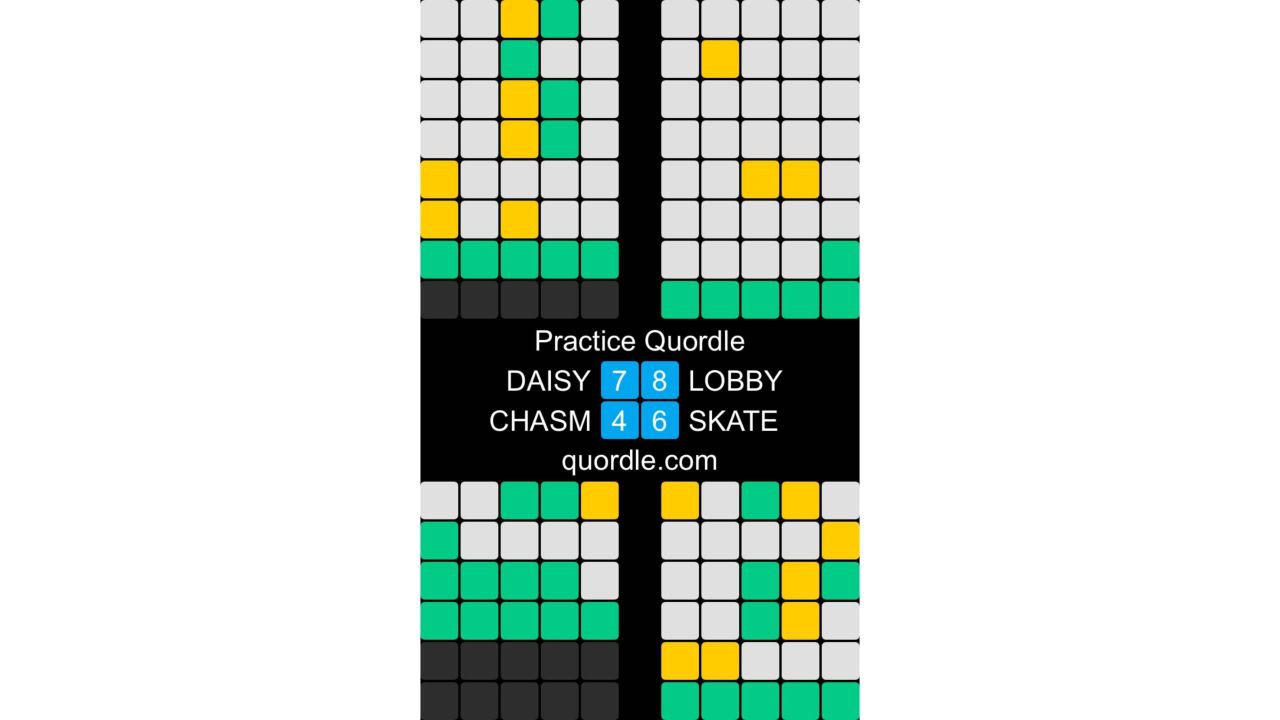 Strategy for Dordle is the same, except you’ll be done sooner. I think simultaneous puzzle-solving is a good learning tool for regular Wordle, since it encourages thoughtfulness in information gathering rather than just trying to guess the correct answer. Give it a try and see how you fare! (Meanwhile, I need to try Octordle.)