What to Do If a Possum Gets in Your House

A few years ago, a possum got stuck in my bathroom wall. At the time, I was living in downtown Houston, in an old bungalow that sat on a pier-and-beam foundation. Somehow, the possum managed to get under the house, then crawl up in the space between the walls, where he got stuck and subsequently spent an entire day trying to get out again.

As luck would have it, my husband was out of town for work, which meant waking up to those sounds was a very confusing and frightening experience — at first, I thought someone had broken into the house.

If a possum gets stuck in your house…

First, don’t panic. As scary as it is to wake up to the sounds of a possum crawling around in your walls, they are actually very gentle creatures who do a good job at eating pests like insects and cockroaches (which, in a city like Houston, is definitely a public service).

Although possums look scary, especially when they drool or open their mouth to show needle-like teeth, these are defence mechanisms that are mostly for show. The drool makes predators think they are diseased and therefore not very tasty to eat, while the showing of the teeth is usually enough to scare off everyone else.

Contrary to popular belief, it’s also extremely rare for a possum to have rabies, which is thought to be because their body temperature is lower than most other warm-blooded creatures. You still don’t want to handle them because they can carry other diseases, or they can harbour ticks or fleas, but the likelihood of a possum either hurting you or giving you rabies is pretty low.

Of course, you do want to get a possum out of your home in a timely manner. If they are inside your house, you can either shoo them out the way you might a cat, or you can create a good exit route, by closing all the doors except for the exit. It’s best to wear heavy gloves and to not get too close, but the chances of them attacking you is very slim.

Just remember that they are slow creatures, and are probably scared and confused, so it’s best to exercise some patience. It’s also important to remember that a possum’s main defence mechanism is “playing dead,” which is actually an involuntary reaction to the threat of danger, where they go into a comatose-like state. Even if you think you have a dead possum on your hands, they might actually surprise you by “waking up.”

Call pest control, if need be

If you don’t feel comfortable removing the possum on your own, or if it’s stuck in a place that is too hard for you to manage, you can call a wildlife removal service. Most likely, they’ll set a trap for the possum to catch and release them — just make sure that it’s a humane removal service. 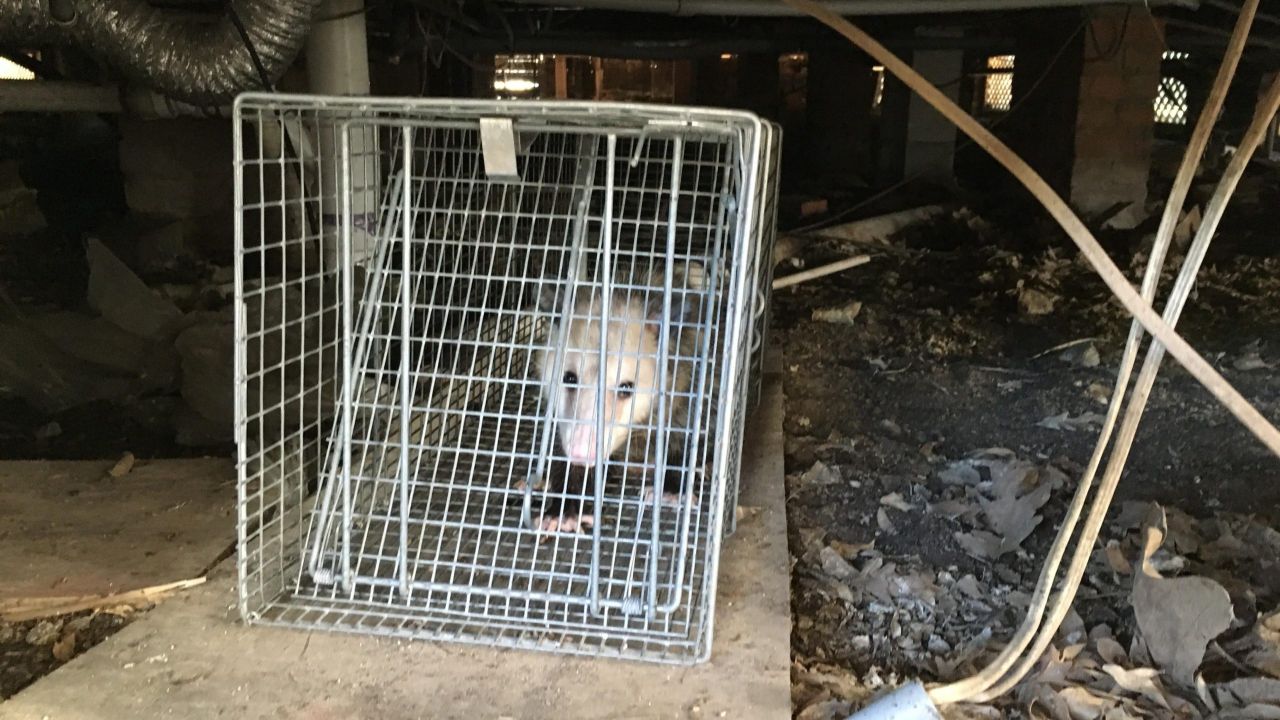 If one possum gets in your house, another possum can get in your house, whether it’s through the foundation of your house, the roof, or another. way in. Once you’ve dealt with your resident possum, it’s a good idea to try and prevent it from happening again, by sealing up any possible entrances.

In my case, I ended up calling pest control, who came and placed a trap underneath the house. The next morning, when I went and peered under the house, the offending possum (pictured above) was in the trap, staring at me, looking decidedly harmless. Then, pest control came and released him outside the city limits, where hopefully, he’s out there living the good life, eating all of the insects he can handle.