The Difference Between Cornmeal, Grits, and Polenta

I eat a lot of corn and corn products. I love cornbread, corn casserole, cornmeal-crusted catfish, grits, and polenta, and consider those last two to be distinct dishes. Much like pornography and erotica, it can be hard to delineate the differences between polenta and grits, but I can identify either on sight (or taste). 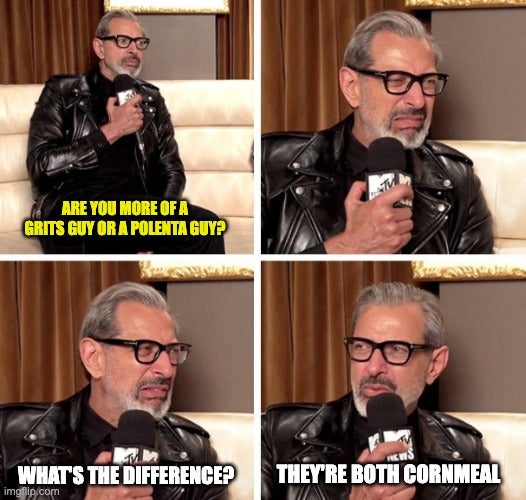 I made this meme to troll myself. (Image: Claire Lower)

They are, however, both made from cornmeal, and understanding their similarities will help you appreciate their differences.

Grits and polenta are both technically cornmeal — corn that has been dried and ground to make a meal — but I wouldn’t pick up a bag of commercial cornmeal from the baking aisle and try to make it into a bowl of grits. Cornmeal can be coarse, medium, of finely ground, and can be made from yellow, white, blue, or red corn. It’s primarily used for baking (cornbread), battering (catfish), and frying (hushpuppies), and is commonly found on the bottoms of pizzas and sourdough boules, where it keeps the dough from sticking to the pan and provides a little texture.

Like most grains, you can buy cornmeal in two forms: Conventional and stone ground. According to Eater, it all comes down to the germ:

Conventional cornmeal — most of the stuff you’ll find on the grocery-store shelf — is “degerminated,” which means the hull and the germ have been removed from the kernels; this creates a shelf-stable product with a somewhat uniform texture. Stone-ground cornmeal, on the other hand, is whole grain; it still has the hull and the oil-rich germ attached, making it more perishable (and artisanal) than the standard stuff.

Coarse, stoneground cornmeal can technically be used to make a bowl of grits, though that’s not what is traditionally used, nor does it taste like grits to me (more on that in a bit). Fine and medium cornmeals are best for baking cornbread (or cornmeal cakes), and coarse and medium conventional cornmeals are perfectly serviceable for making pizza crust.

Both grits and polenta are made from field corn, which is less sweet than the stuff we gnaw off the cob. (My great-grandfather preferred field corn, complaining that the grocery store stuff was “too sweet.”)

Though thought of as a Southern dish, but Native Americans were eating grits long before any colonialists got here. Grits are made with coarsely ground dent corn, which gets its name from the little dent in the kernel, and is low in sugar and high in starch. This starch is released as the coarsely ground corn cooks, giving the dish a creamy body without the addition of dairy (though you can certainly add butter and cheese). Grits can be made with yellow or white dent corn.

Polenta, on the other hand, is Italian in origin, and traditionally made with yellow flint corn. Flint corn is named for its texture (“hard as flint”) and contains less soft starch than dent corn. This gives polenta a grittier, more toothsome texture that cooks up a little less creamy than a traditional bowl of grits.

Do you even nixtalmalize, bro?

In my mind, true grits are made from hominy — corn that has been soaked in an alkaline solution (a process called nixtalmalization). We’ve discussed nixtamalized corn before, but to recap: Soaking corn in lime, lye, or some other basic liquid gives the corn a nutty, heady aroma while rendering it more nutritious.

In an excerpt from his book Beautiful Corn, Anthony Boutard explains how nixtamalization makes certain nutrients in corn more available:

Steeping the grain in an alkaline solution makes it more digestible and, most important, more nutritious. In untreated corn, the niacin (vitamin B3) it contains is bound to a large molecule that does not break down in our gut. The alkaline treatment splits off this molecule, making the niacin available in the human digestive tract. In addition, corn steeped in slacked lime has a higher calcium content than raw corn, especially important in the pre-Columbian culture without any dairy animals providing this essential mineral in the form of milk and cheese.

This puffy, extra corny corn (commonly called “hominy” in the U.S.), is often eaten as a side, used to make pozole, ground into masa for tortillas or tamales, or ground and boiled to make grits.

Though you can technically make grits from un-nixtamalized corn, I don’t see the point. Hominy grits have a sweeter, nuttier, more layered flavour profile, and I firmly believe non-hominy grits are responsible for the grits’ “bland” reputation. (Want to make your own hominy grits from scratch? Check out our guide.)

Preparation also plays a big roll in whether a bowl of mushy boiled corn bits should be considered grits or polenta. Nixtamalization and corn type aside, it helps to think of each as a realised dish, rather than a single ingredient (even though they are technically both).

Due to their high soft starch content, grits are usually cooked in water and flavored with butter, salt, and cheese. They can also be used as a base for shrimp & grits, baked into a casserole, or fried in bacon grease, but they also serve as a satisfying, flavorful side dish without too much futzing, provided they are made with nixtamalized corn.

Polenta is usually cooked in stock or milk, the latter of which gives the dish a creamy body, making up for the lack of soft starch in flint corn. It can also be simmered with herbs and cheese, then served in a bowl or allowed to set. Once set, polenta can be sliced and fried. (You can also buy firm, pre-cooked polenta in a tube, ready for frying.)

You have a lot of options, is what I’m saying, and you are free to do with this information as you please. No one is going to stop you from cooking nixtamalized dent corn in stock or milk or scold you for nixtamlizing flint corn and serving it with shrimp. Both Italians and Southerners are prone to a certain degree of pedantry, but how you cook your corn mush is your business. (Just don’t tell me if you add sugar to your grits. Or use the instant kind. Those decisions are between you and your god.)