The Best Apps of 2021 for Apple Devices

Every year, the App Store Awards highlight some of the best apps and games for the Apple platforms and devices. Think of them as the Oscars of the App Store world: an honour handed out by the industry itself. You have to be pretty darn good to earn an award — and sometimes, it takes an app years to get there (consider 2021’s Best App for iPhone, Toca Life: World, which has been slowly iterating and improving since launching in 2018).

As another year ends, it’s worth taking some time to consider some of the best apps for iPhone, iPad, Apple Watch, and Mac you can download right now. Not all of them need have been released this year: Many apps received meaningful updates over the past 12 months that took them to a whole different level.

If you’re looking forward to some downtime over the holidays, ditch Instagram and make sure to download some of the apps and games from this list instead. It will be time well spent. 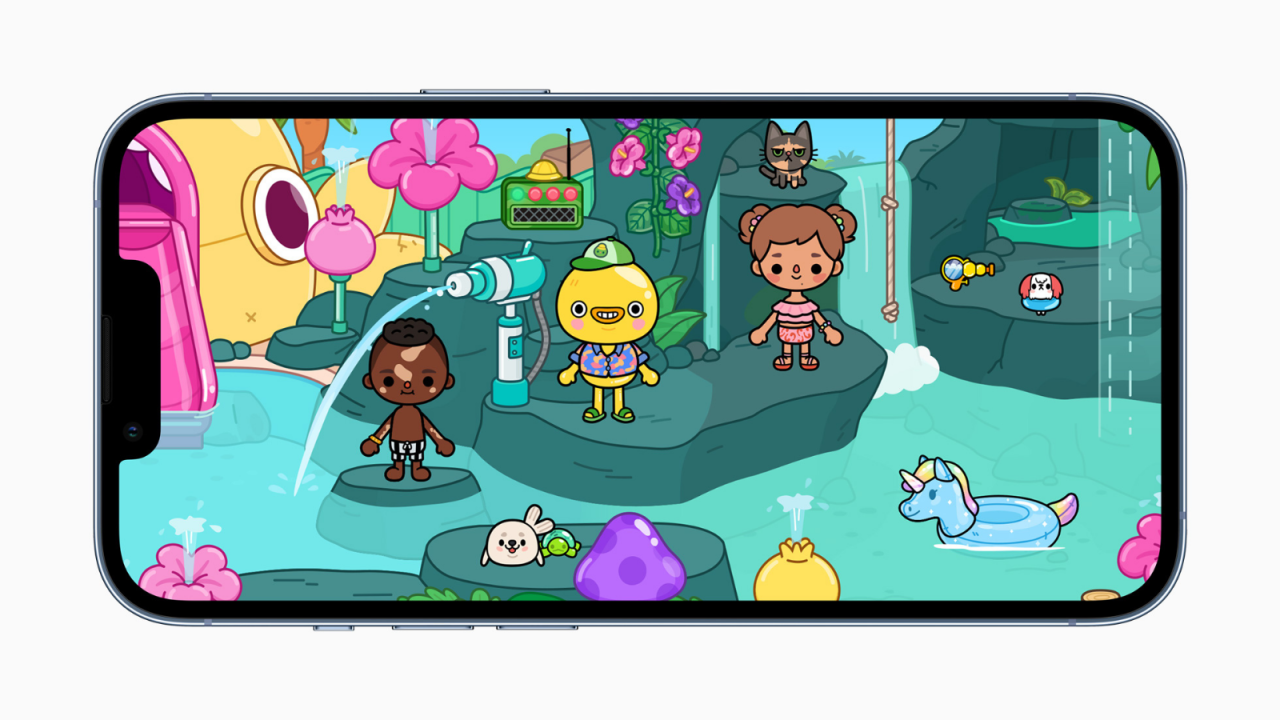 Let’s start with Apple’s iPhone App of the Year, Toca Life World. If you’ve never heard of this app, don’t worry, it’s not just you — but if you have kids, you can probably ask them about it.

This is a world-building app for kids. You can design your own character, go to different locations, and role play different storylines. It’s an app that helps kids learn self-expression in a safer environment than something like Roblox. The game is free to play, though of course there are a lot of options for expansion packs in form of in-app purchases.

This probably isn’t an app you’d download yourself (though it is just as addictive for adults who might be entertained by, say, furnishing a virtual house). But if you’re visiting your family over the holidays, it’s a great way to occupy the kids so the grownups can actually relax.

While Apple didn’t name Procreate the iPad App the Year, we still think it’s probably the best iPad app out there. It’s a digital drawing app, and this year, their Animation Assist feature made some major improvements. In fact, Procreate is an app that keeps on giving: It costs a flat A$14 and offers no in-app purchases, yet every couple of months, it comes out with a feature that levels up the entire iPad creativity space.

Procreate deserves special recognition this year for the way it implemented Animation Assist. You can draw subjects, create their paths, define some perimeters, and hit play to see your drawing come to life. Magical. 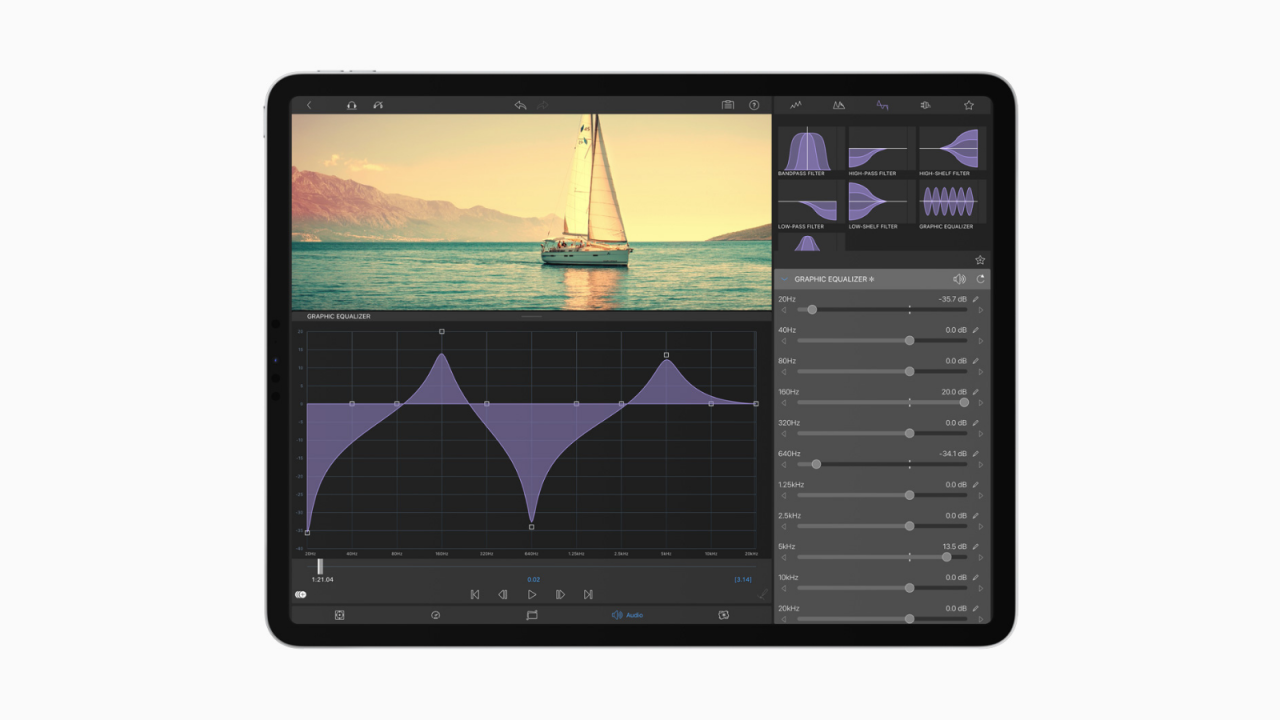 What Procreate is to drawing, LumaFusion (A$46.99) is to video editing. It’s a multi-track video editor that really shines on an iPad Pro with an M1 chip. This is an easy-to-use app that lets you edit six video tracks and six audio tracks, all at once.

Think of it as Final Cut Pro X for the iPad (which Apple still refuses to make). While you won’t get all the same features, or the plugin library, you can get pretty close with LumaFusion. It’s especially great for content creators who are just starting out, and want to edit videos on the go. 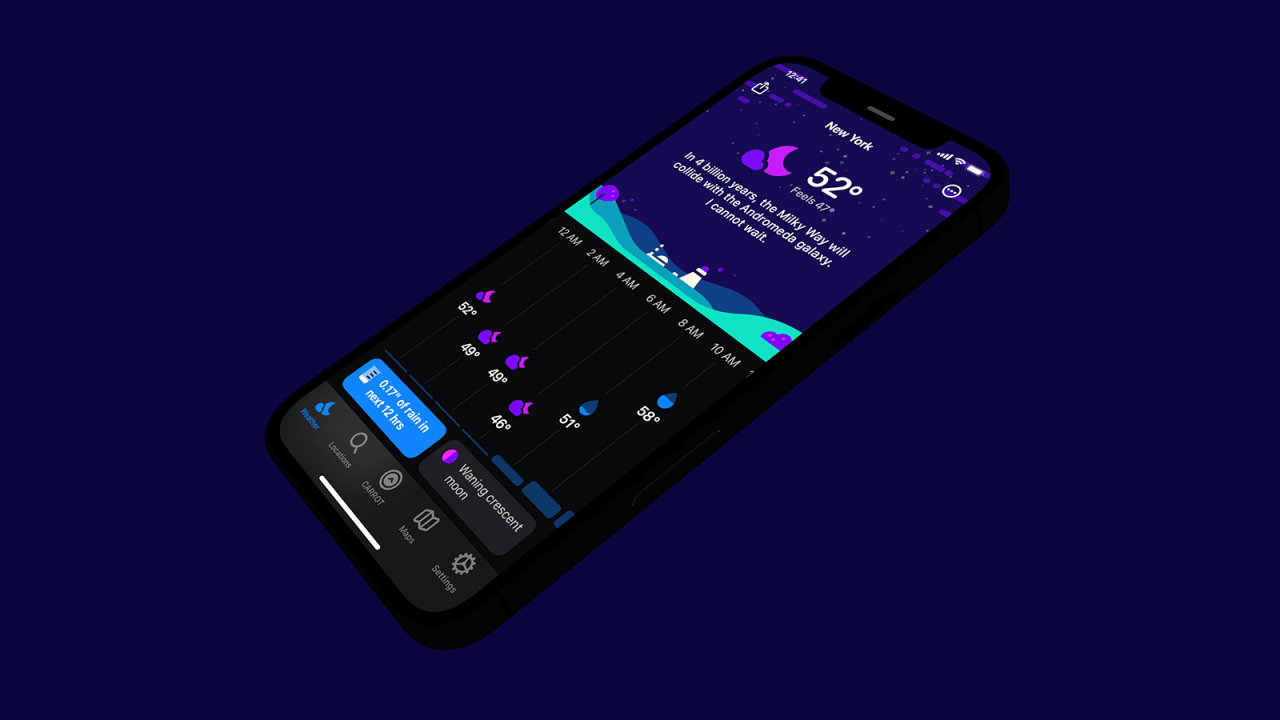 After a couple of years, apps tend to hit a kind of plateau, and that used to be Carrot Weather’s story: It was a snarky, beautiful weather app that had its following, but it wasn’t doing much new.

But starting this year, Carrot Weather really shook things up. It made the app free, and switched to a subscription model. While this came with a steady income, and a whole new modular approach to the app.

Carrot Weather users can now essentially design their own weather app, creating different themes with the parameters that you want to display, and how you want to display them. Plus, the Apple Watch app, with its extensive complications, is also darn good (which is why it won the Watch App of the Year 2021 award). And the same sense of humour remains — though it’s probably best to make sure your phone is on silent before opening in polite company, lest it start swearing at you about the weather. Years ago Evernote used to be all the rage among note-taking apps. Now, Notion seems to have taken over those honours, and with good reason — but the problem with Notion is that it doesn’t feel at home on any Apple platforms, especially the Mac.

Enter Craft. If you want a thoughtfully designed, native experience for collaborative document editing and note-taking on an Apple platform, this is it. It’s a relatively new entrant in the space, but it’s already making big waves. The app is visually simple, beautiful, and it runs quite fast (including the Google Docs-style collaborative editing). Myst ($10.99) is back, baby. This adventure video game first came out in 1993. Almost 30 years later, it has been crowned the App Store’s Mac Game of the year 2021. Myst’s longevity is pretty remarkable — it’s one of those games that’s updated and remastered for every new platform. And now, a beautiful new version is available for the latest Macs. The first-person adventure game is as it ever was: an immersive way to explore a virtual world, go on adventures, and of course, solve puzzles. 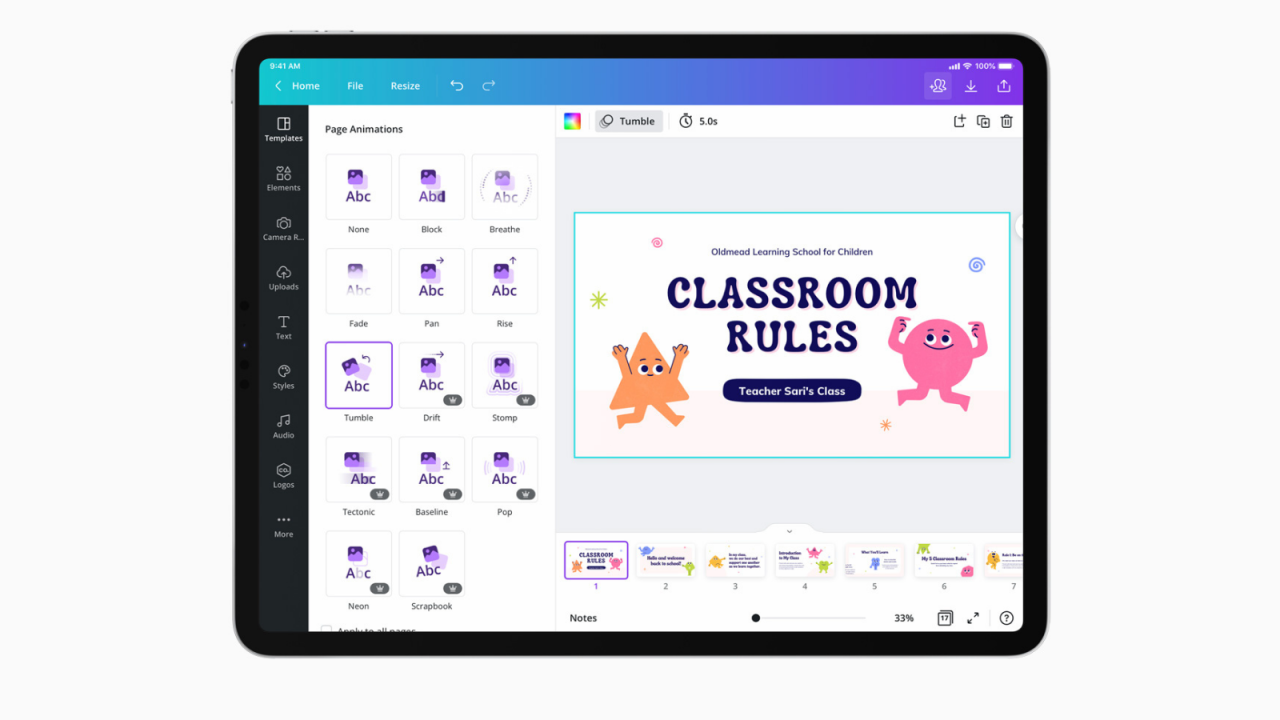 If there’s one app that truly exploded over the last year, it’s Canva. The free graphic design website took over everyone’s iPhones and iPads as the app got even better, offering more features and flexibility.

Want to create a quick poster? Use a template from Canva. How about an Instagram Story? Or a LinkedIn post? Canva will do the trick. It’s no exaggeration to say that this is an essential tool for anyone trying to create a brand identity online without investing in a graphic design degree. 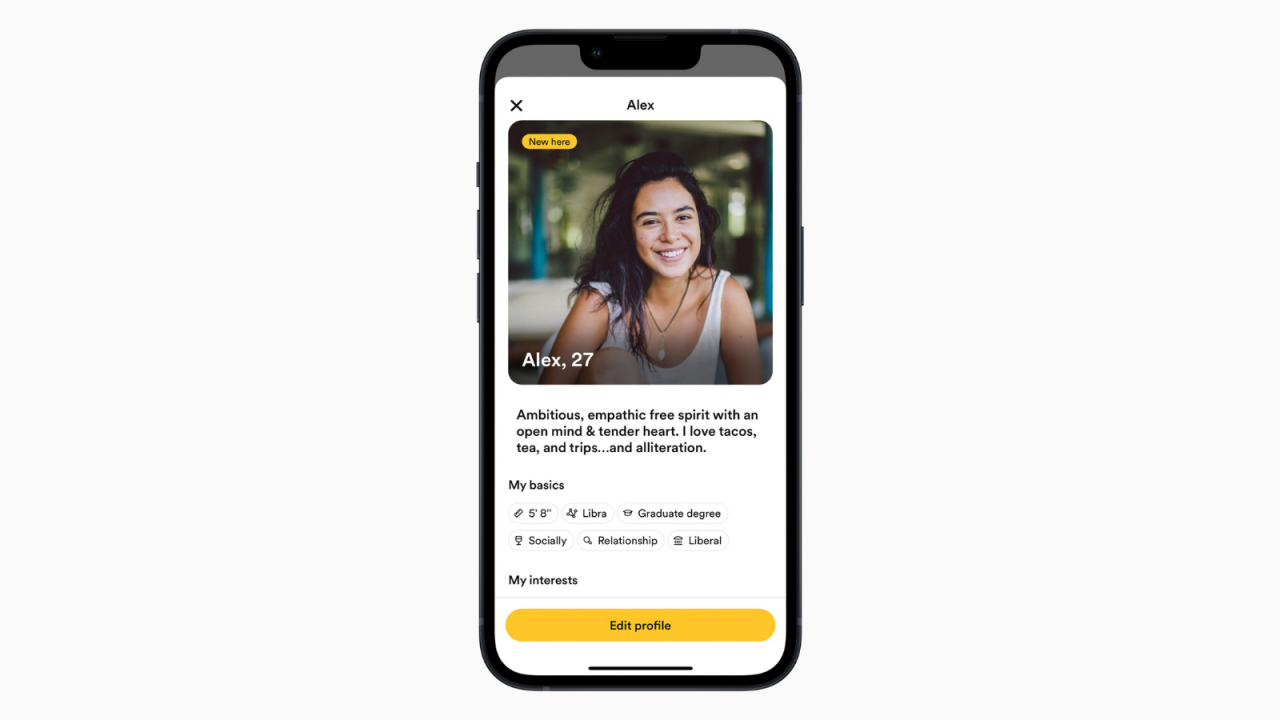 Dating apps come and go. They either become a cultural punching bag like Tinder, or they stay in their own niche. But Bumble (along with Hinge) has managed to stay relevant even in 2021. Nothing much has changed this year. But given Bumble’s commitment to privacy, it’s one of your better bets for app-assisted romance. 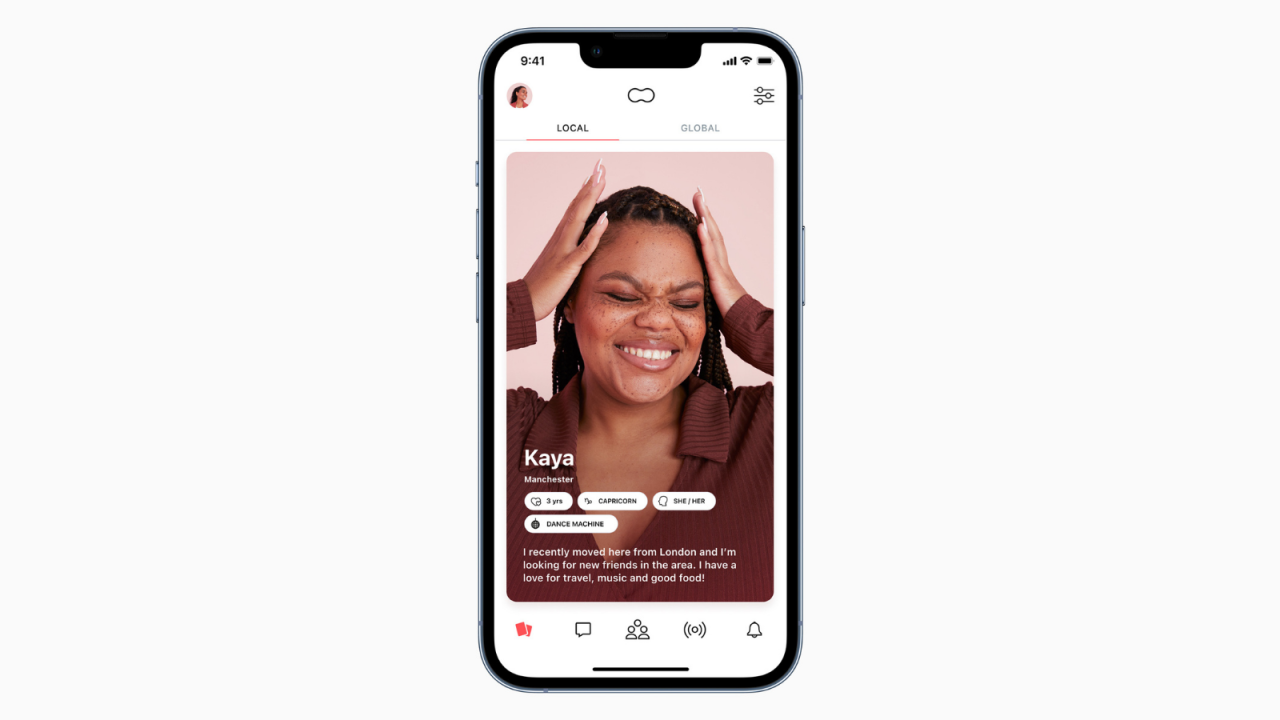 Peanut is like Tinder, but for motherhood. It’s a safe community designed just for navigating through the experience of having a baby and making it through those rough early years. It helps you connect with other parents who are going through the same journey, so you can share your struggles, and find support.

You can find groups, connect with someone one-on-one, or you can join Clubhouse-style live audio rooms. Marvel’s Future Revolution is an MCU fan’s dream. It’s an open-world role-playing game that hits all the sweet points, from the Battle of New York from The Avengers, to a new update inspired by The Eternals.

This is a role-playing game, but the adventures it sends you on are customisable. You can create, tweak, and upgrade your characters. You can pick their powers, and even design their costumes (there are more than 400 million combinations possible, per hero). It’s the best way to climb inside your favourite comic book universe while staring at your phone.