12 Clever Apple TV 4K Settings Everyone Should Know About

If you’ve got yourself the brand new Apple TV 4K, you probably aren’t making the most of it if you haven’t changed a few things. Curiously, the Apple TV 4K hides some really useful features under various menus, and its defaults leave a lot to be desired: It doesn’t let you go back to the home screen if you hit the home button, and sometimes it doesn’t pick the best audio and video settings by default either. Fortunately, you can fix all of that and make your Apple TV a lot more awesome.

Take screenshots on your Apple TV 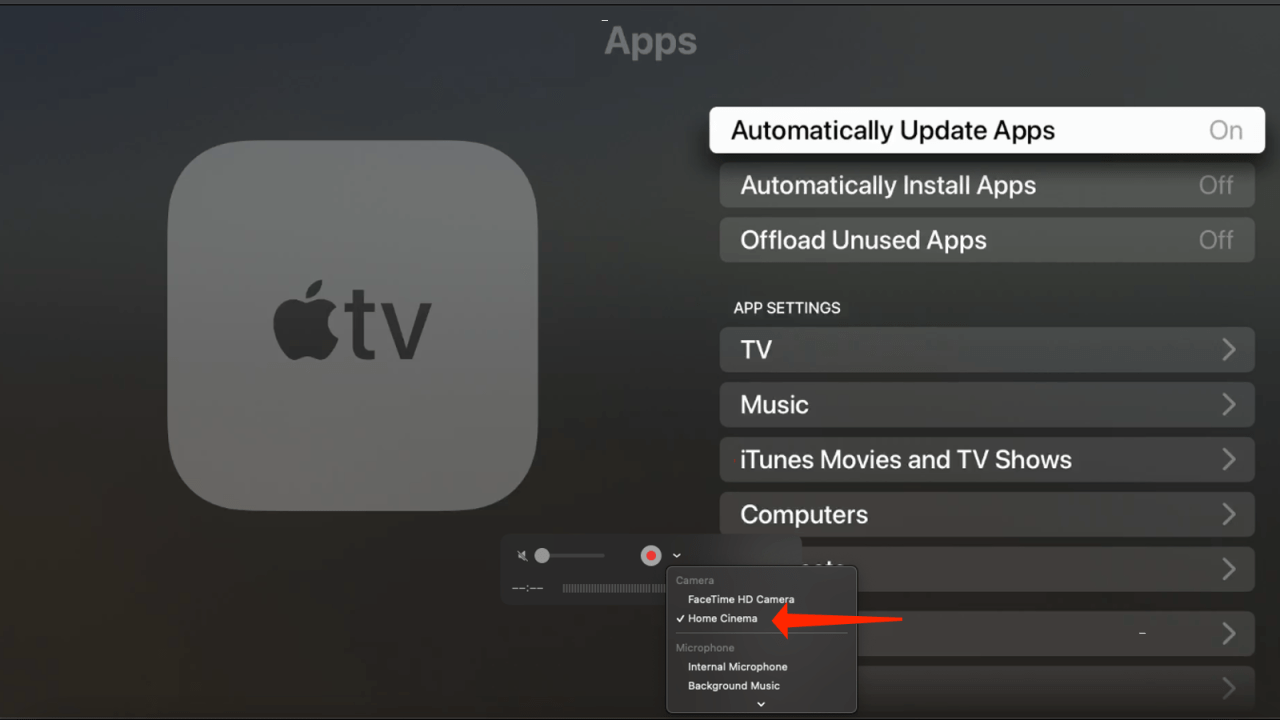 Unfortunately, Apple doesn’t allow you to take screenshots easily on the Apple TV 4K, but it’s still possible. If you want a quick snap of the screen to share a funny moment with your friends, you’ll have to find a Mac that’s connected to the same wifi network. When you have that, open QuickTime Player and go to File > New Movie Recording.

This will open QuickTime Player with the selfie camera enabled on your Mac. Hit the Down Arrow next to the record button and under Camera, select Apple TV 4K. Note that your Apple TV may show up as Living Room, Home Cinema, Bedroom, or others in QuickTime Player, depending on what you’ve named it in the Home app on your iPhone or Mac.

Make the home button actually take you to the home screen 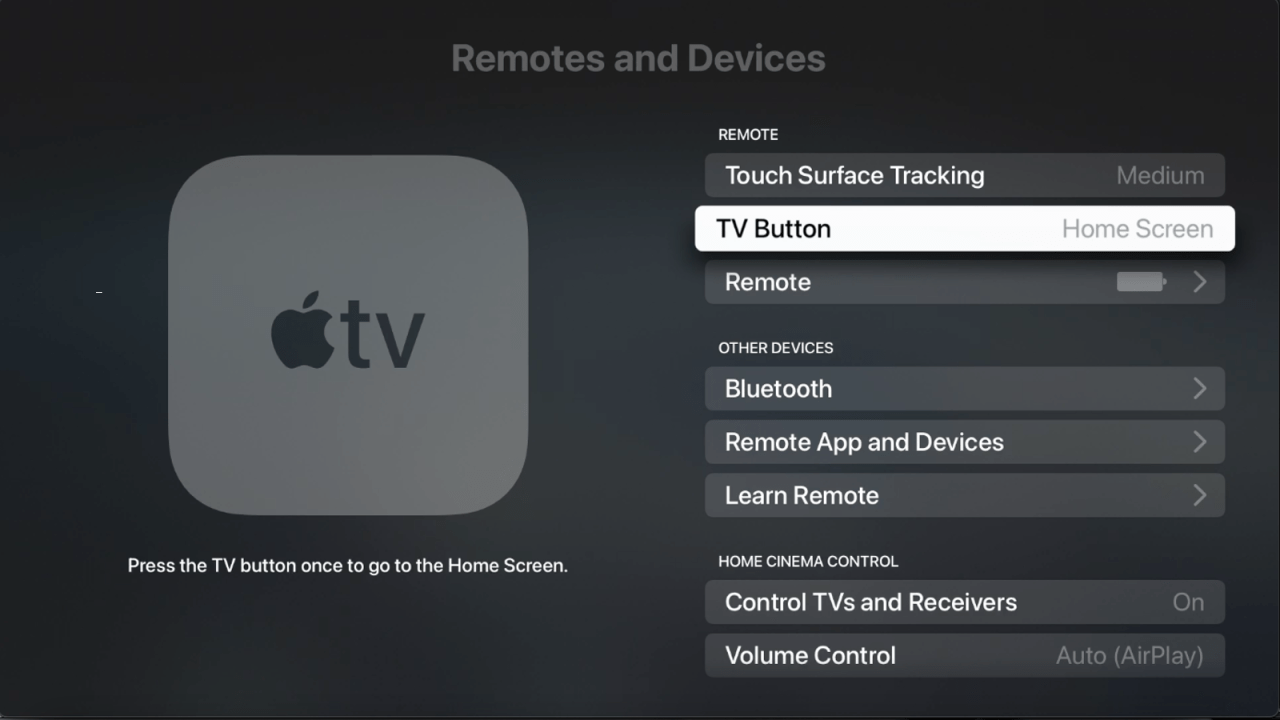 In a weird move, the Home button (known as the TV button) on your Apple TV remote takes you to the Apple TV app by default. If you use any other apps, it’s annoying to be taken to the Apple TV app every time you press that button. To make it actually take you to the Home Screen, you can go to Settings > Remotes and Devices and select TV Button. If the text next to TV Button reads Home Screen, then you’re all set. Let’s face it, even the refreshed Apple TV remote isn’t the best for typing passwords on the device. And while some people will use their iPhones to type text on the Apple TV, that’s not an option for everybody. A cheap Bluetooth keyboard makes a world of a difference here, and if you find a multi-device keyboard, you could pair it with all of your most-used devices at once.

When you’re ready to pair, go to Settings > Bluetooth and get the job done.

On a related note, Apple Arcade has a lot of excellent games that don’t support Apple TV’s remote. You’ll have to use third-party controllers like the Xbox Series X controller or Sony’s DualSense, among others. You can pair these to the Apple TV via Bluetooth settings, and the best thing is that these controllers can control your Apple TV as well. You can switch between apps, play and pause videos, and do other things using video game controllers with the Apple TV.

Similarly, you should consider pairing AirPods or other Bluetooth headphones to use the streaming device without disturbing other people in your house. 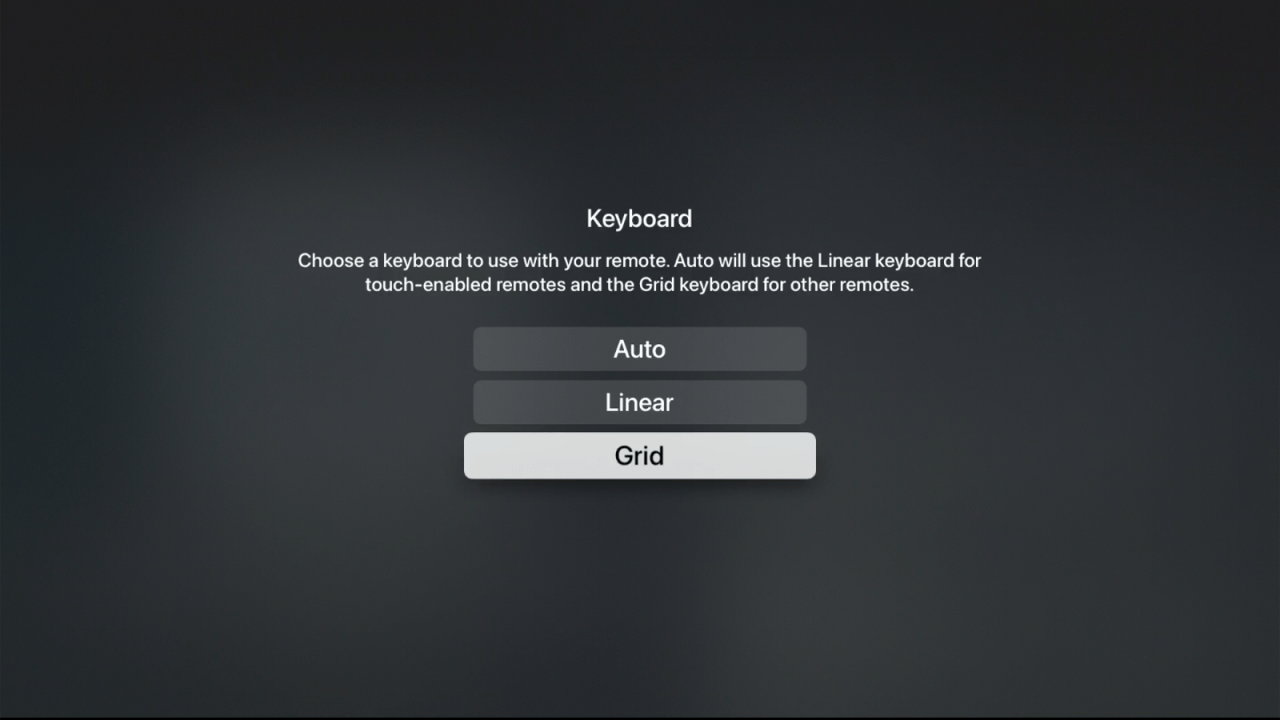 If your only input method is the Apple TV remote, you should make your life easier by changing the on-screen keyboard’s layout. The default single-line keyboard makes you swipe a bit too much because all characters are lined up in alphabetical order and you need to keep swiping from one end of the screen to another to find the letters you need. You can change this to the Grid keyboard layout, which makes it a lot easier to select the right characters.

Update your Apple TV’s software for the latest features (or try beta builds, if you’re adventurous) 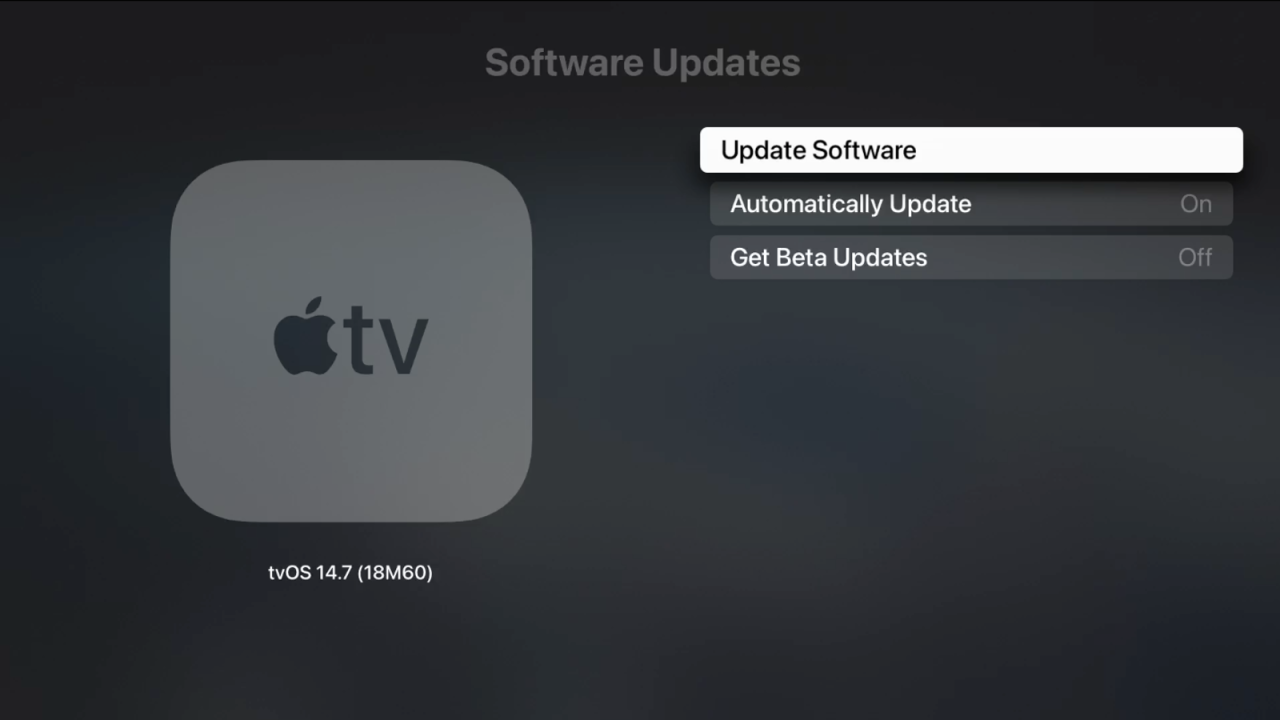 Apple keeps adding new features to the Apple TV 4K using software updates. If you don’t update, you’ll miss out on all the fun. The ability to pair PS5 and Xbox Series X|S game controllers was added earlier in 2021 via a software update, so you should go update the Apple TV as soon as possible for things like that. Go to Settings > System > Software Updates and select Update Software to get this done.

Also, you can install beta builds if you’re feeling adventurous, but know that it involves some risk. You could end up in a situation where your favourite apps don’t work properly and key OS features are broken.

Turn off automatic app updates if you have to As much as we hate to suggest this, if you’re happy with the way your Apple TV apps are working, you could consider disabling automatic updates. Quite often, Apple TV apps tend to issue updates that break key features, as we recently saw with HBO Max (which fixed these issues later). Updating apps is a good idea, but you can always check release notes and if there are any complaints on social media before updating. This isn’t a permanent solution, but you can delay the update till glaring issues are ironed out.

To do this, go to Settings > Apps and make sure that Automatically Update Apps is set to Off.

Use Apple Music for karaoke It’s easy to forget that your Apple TV can also be used as a music streaming device. If you have an Apple Music subscription, you should listen to songs that have time-synced lyrics available. It’s almost like having your own karaoke setup where you can sing along with your favourite songs. It’s a lovely feature to try for small gatherings at home.

Just open the Music app on your Apple TV and play any song that you like. If it has time-synced lyrics, you’ll see those on-screen right away. If you install a bunch of apps, your Apple TV’s home screen can become a bit of a mess with frequently used apps appearing towards the lower half of the display. It’s far from ideal, so you can switch things up. Select any app and press the touchpad on the Apple TV’s remote till the app icon starts jiggling. Now swipe in the direction you want to move the icon.

You can keep doing this until your favourite apps are in the top row, and frequently used apps are somewhere near the top. You can also drag apps on top of other apps to place them into folders, just as you can on iPhone or iPad. AirPlay allows you to cast videos from other Apple devices to your Apple TV. If you’re watching something on your iPhone, open the Control Centre and select the Screen Mirroring option or the AirPlay icon above playback controls to send the video to the big screen using your Apple TV. Similarly, most video players (including the one used by YouTube) let you watch the video on the big screen via Apple TV.

Things will get a lot more interesting when you realise that you can use this feature to stream two videos simultaneously. If you want to watch MLB and IndyCar at the same time, AirPlay one of them from a Mac to the Apple TV first. When it’s playing on the Apple TV, pause the video, then swipe up using your remote and select the Picture-in-Picture icon. The video will begin playing in a small thumbnail in the bottom-right corner.

Then, you can open another streaming app on the Apple TV, and play a second video. This way both will be streaming simultaneously, but the full-screen video will play with sound. To hear the other video, swipe up on the Apple TV remote and select the swap videos icon. This will make the videos switch places. 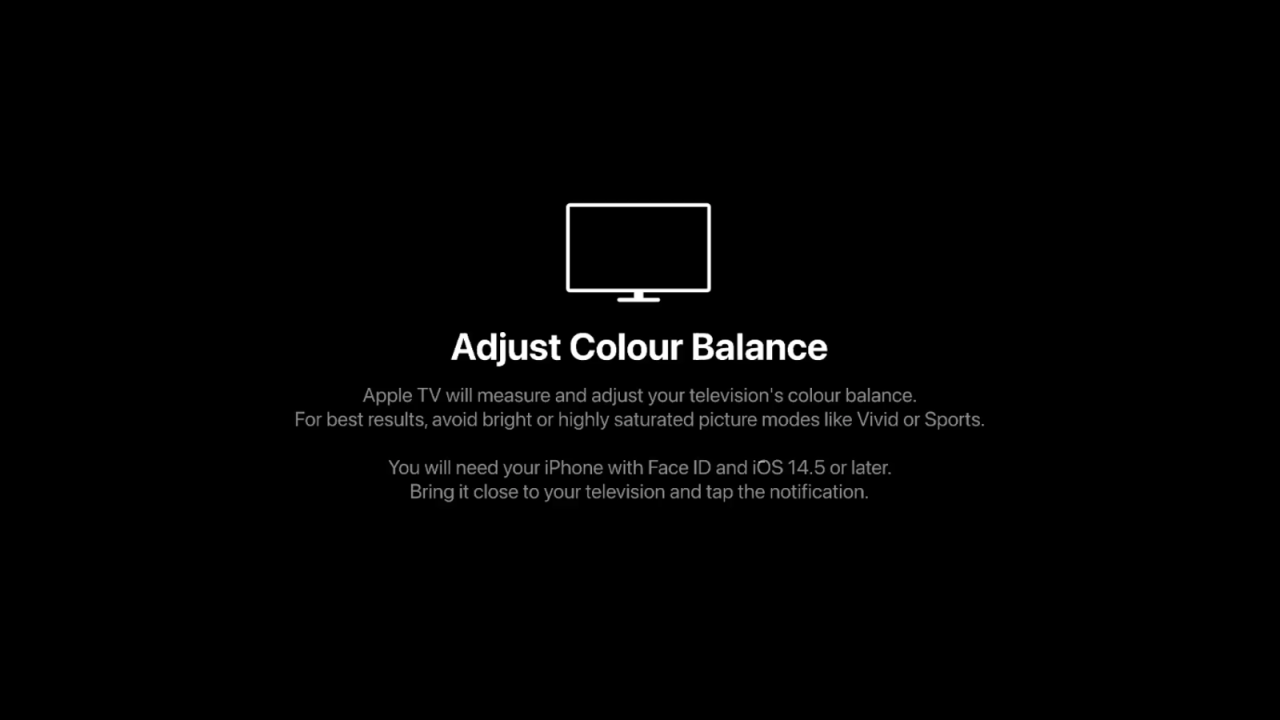 Apple TV allows you to quickly calibrate your display for better picture quality using a nifty feature called Colour Balance. You should try it once by going to Settings > Video and Audio > Color Balance and following the on-screen prompts. Note that this feature requires an iPhone with Face ID, running iOS 14.5 or newer. You’ll have to take the iPhone close to the display and use the phone’s front camera for the calibration. The process is smooth though and takes only a few minutes. Finally, go to Settings > Audio and Video and scroll down to the Audio section. Here you can check if the Audio Output is set to the correct speakers, which makes a big difference. If you have a HomePod in the house, using it as the default speaker could be much better than using your old TV’s built-in speakers.

Next, enable Reduce Loud Sounds to decrease excessively loud sound effects (such as sounds of explosions) automatically. You can also scroll down and select the default Audio Language and Subtitle Language respectively, to avoid repeatedly tweaking these basic settings.