Dave Chappelle’s latest (and allegedly final) Netflix special The Closer has yet again sparked controversy around the comedian’s determination to keep pushing boundaries with transphobia and homophobia. (Brave!) If this feels familiar, it’s because it is. In response to this special, several trans staffers at Netflix have publicly called out and cut ties with the company.

This backlash is the latest instalment of the great irony with “getting cancelled.” Yet again, the loudest opponents of so-called cancel culture get to call themselves martyrs in front of their sold-out comedy specials produced by the most popular and powerful of streaming services. Meanwhile, many comedians who actually represent the identities being mocked don’t have that same access to the spotlight. Maybe that’s what the real cancel culture looks like; it’s searching for “trans comics to watch on Netflix” and finding not any new faces to watch, but instead pages of results about Dave Chappelle’s material. Who is really in danger of being silenced?

Instead of fuelling to the transphobic fire, here are some of our favourite trans, genderqueer, and hilarious comedians to have on your radar (if they aren’t already).

Some notes: This list is in no way exhaustive and is certainly missing the names of some wildly talented comics. (If you’re on Twitter, do yourself a favour and throw a follow at everyone in this thread). And sadly, not everyone featured on the following slides will have quick links to specials on major streaming platforms — but that’s sort of the point here. Patti Harrison, who you can find as @party_harderson across platforms, is often described as an agent of chaos. Her Twitter account is characteristically suspended at the moment, but you can get the gist of what it was like by watching this clip. She gained popularity for her supporting role as Ruthie on Shrill before starring in the 2021 film Together Together, which also stars Ed Helms. Harrison was also an MVP in the second season of I Think You Should Leave with Tim Robinson. For a good representation of Harrison’s particular brand of controlled chaos, watch this Driver’s Ed sketch (NSFW). Harrison was named one of Variety’s “10 Comics to Watch” in 2019. The only thing that’s for certain when watching Patti Harrison is that you will never, ever know what words are about to come out of her mouth. 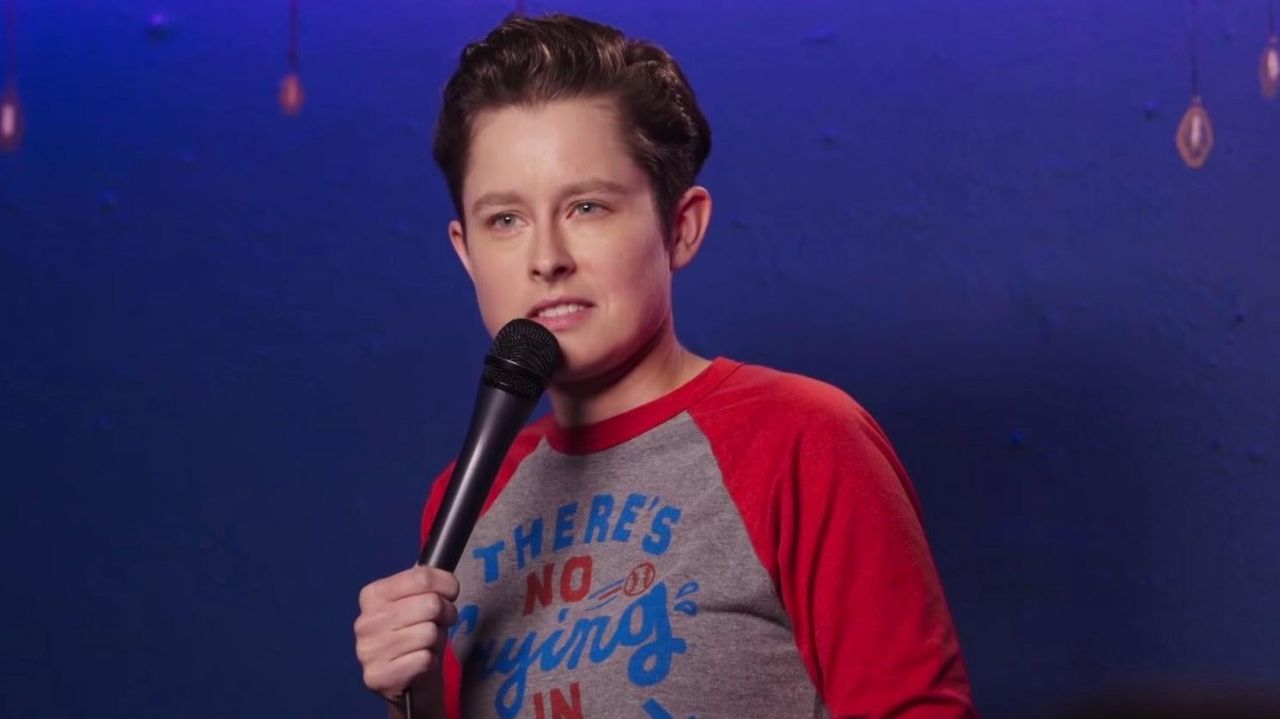 RB Butcher’s “blue collar brand of cool” has endeared them to audiences nationwide, as they’ve performed standup and appeared on shows such as Conan, The Meltdown with Jonah and Kumail, and Adam Ruins Everything. Their debut standup album, Butcher, and release with Cameron Esposito, Back To Back: Live, both debuted at number one on iTunes. Rhea was also named one of Variety’s Top Ten Comics to Watch 2017 at the Just For Laughs festival. Personally, I’m partial to the evolution of their joke about strangers calling them “sir.”

Listen to Pull Yourself up by Your Bootleg on Spotify. 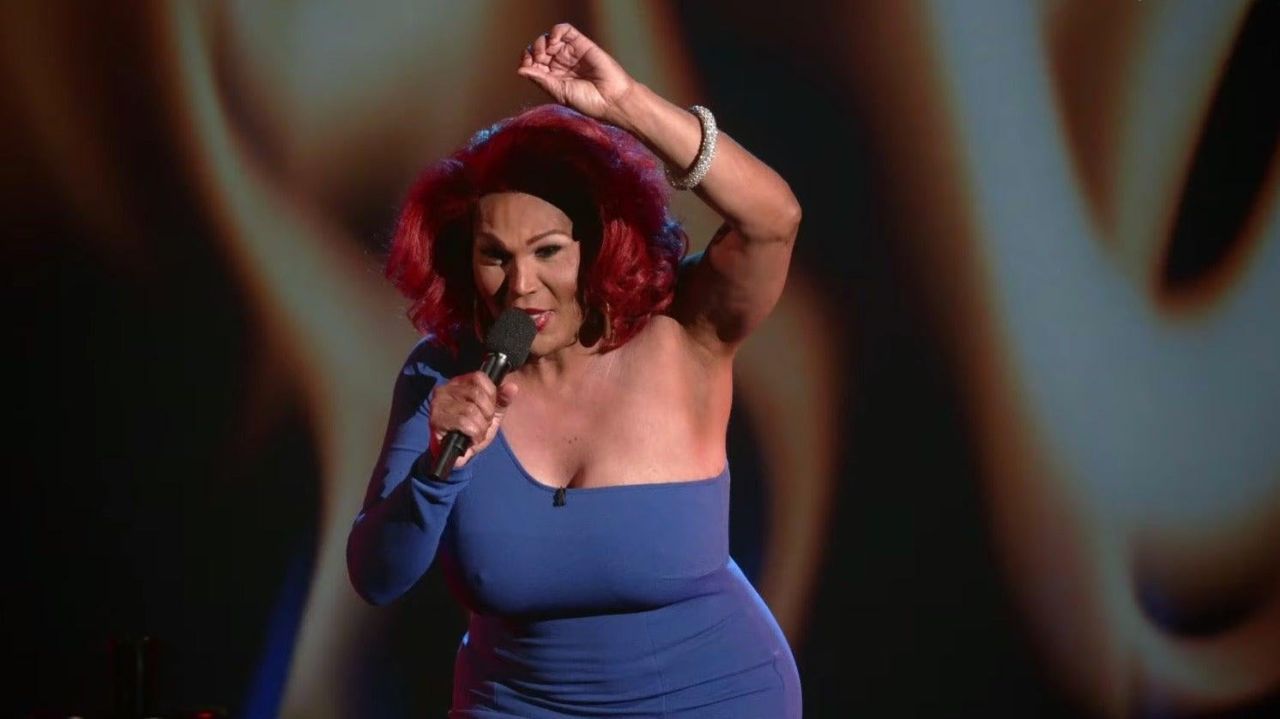 Flame Monroe was chosen as one of the six stand-up comedians on They Ready, Tiffany Haddish’s Netflix program. We previously featured Monroe in our 15 funniest LGBTQ comedy specials, where we wrote that after watching Monroe confidently chat about life as a single parent while donning thigh-high sparkly boots, it’s easy to see why Haddish picked her. Jes Tom is an actor, writer, and comic who is, according to their site, “gleefully providing the nonbinary queer Asian American radical cyborg perspective that everyone never knew they wanted.” Jes was a 2018 StandUp NBC semifinalist. Their self-produced half hour comedy special, COLD BREW is available to watch on Vimeo. Jaye McBride is the first openly transgender comedian to perform at Madison Square Garden and is a regular at New York City’s iconic Comedy Cellar. Having transitioned in 2007, Jaye is uniquely qualified to talk about awkward first dates, strained family relationships, and self-acceptance. D’Lo is a Tamil-Sri Lankan-American actor, writer, and comedian who has appeared on Transparent, Mr. Robot, Sense 8, and more. With over 15 years as a touring poet, storyteller, and standup, he ‘unapologetically’ challenges Hollywood to tell trans stories. You might recognise Robin Tran from appearances on Comedy Central’s Roast Battle (which are savage and, needless to say, NSFW) or her 2018 one-hour special debut Don’t Look at Me on Hulu, which is part of a six-episode showcase of Asian comics called Comedy InvAsion. Jordan Raskopoulos is an Australian comedian, actress, and digital content creator known for using humour to take down everyone from transphobes to her fellow Australians. She’s also one-third of comedy rock band The Axis of Awesome. The Advocate writes that Ian Harvie is known best as the world’s first out FTM (female-to-male) transgender comedian and a longtime “favourite among other LGBT performers, like Margaret Cho (who once described herself as his number 1 fan).” You might recognise his work on Transparent on Amazon, Young and Hungry on Freeform, and Will & Grace on NBC. After 48 years of identifying as Rick Scotti, the performer — who has toured with Jerry Seinfeld and Chris Rock — has returned to the stage as Julia, now one of the best-known and funniest transgender comedians in the US. This year, Scotti released Funny That Way, a documentary about her comeback story. We’re ending this slideshow on a true icon. Known for surreal, whimsical performances, Eddie Izzard’s site describes her this way: “Hailed as the foremost stand up of a generation. Star of stage and screen. Tireless supporter of charity. Runner. Political campaigner. Fashion icon. Human.” She has cited Monty Python as her biggest influence, and Python’s John Cleese once referred to Izzard as “the lost Python.”