10 of the Worst Things That Can Happen to You While Eating, According to Reddit (and How to Avoid Them)

Do you eat? Then you’ve experienced some very annoying side effects of shoving piles of stuff into your mouth and mashing it up with your teeth. A recent thread on Reddit asked, “What pisses you off when eating?” and people were full of responses (20,000 of ‘em and counting).

We’ve rounded up 10 of the most illustrative examples to create this highly actionable list of Do’s and Don’ts, so you can be less pissed while you’re eating (or at least know you’re not suffering alone). 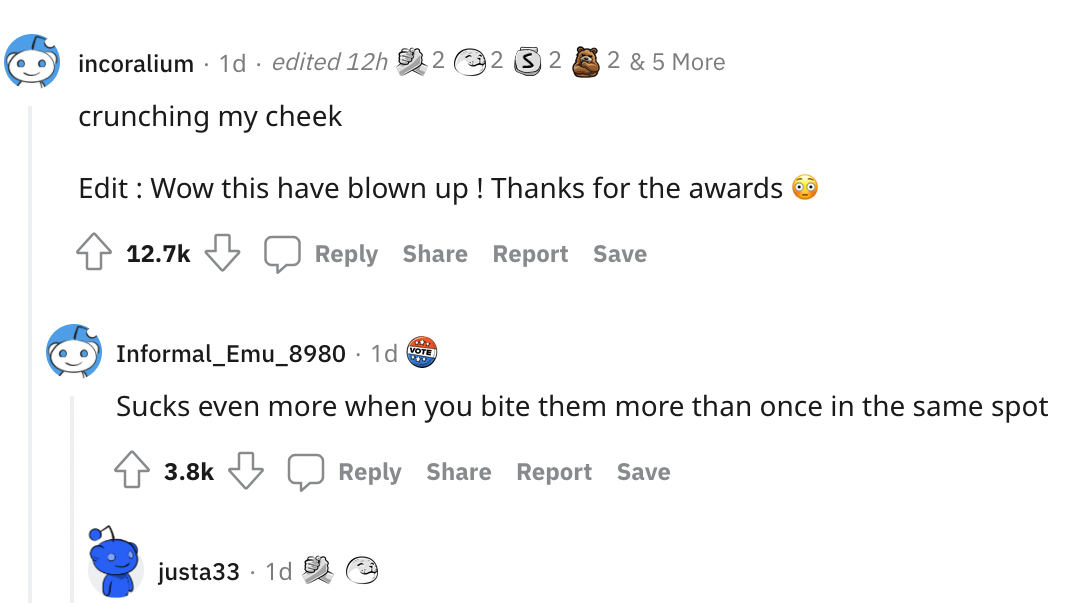 It is widely acknowledged that biting the inside of your cheek while eating is the fucking worst. Only made more terrible by the fact you will likely chow down on the same puffy spot a few more times in accidental succession throughout the week. As user justa33 noted, “It feels like once you bite a spot it kinda swells up and becomes a bigger target for crunching.”

Yes, crunch was the operative, if admittedly disturbing, verb choice. Opinions differed on whether what later develops in the mangled cheek is a canker sore or an “open wound.” One said applying Kanka helps; another swears by swishing with warm salt water after meals. One young grasshopper trained themselves out of the habit by chewing gum and taking “measured bites.” Of course, there’s always the helpful suggestion doled out by one user’s dentist: “Stop biting your cheek.” Thanks, doc.

Don’t: Choke on your drink

A close second to turning your inner cheek into mincemeat is choking on your drink while eating — especially when, according to aedroogo, “the quieter you try to be [when dealing with it] the worse it gets.” Adding insult to injury is the crowd of people who will stay close by, watching you like a hawk and repeatedly asking, “Are you OK? Drink some water. What about now? You good?”

As user Glacial_cry so eloquently noted, “Swear to god it always goes away faster when people don’t realise that I’m trying to make a decision between choking to death or making a noise and attracting unnecessary attention.” So, if you don’t want the stress of a bonkers coughing fit, unwanted attention, and everyone around you thinking you’re a COVID petri dish, please don’t choke on your drink.

Dining al fresco in mild weather always sounds nice, doesn’t it? But then you get there, and all manner of annoying outside things happen. First, the bugs. They could be mere flies landing on your pizza with their poop feet, wasps making your dinner their new home, or full-on bees flying into your mouth. Then there’s the “beautiful breeze” blowing away all your napkins and taking down the flimsy paper cups, and the added unpleasantness of what WorkingClassWarrior noted: “Eating in the direct sunlight. Fucking gross and hot.”

The only thing worse? “Doing so on the footpath on a street with a constant stream of cars seasoning you and your food with pollution and street dirt,” according to shitpost4shawarma. Add in lack of temperature control, rickety tables, less comfortable chairs and, as ZebraBorgata sums up, “eating outside blows.” (Thanks, pandemic!)

User Geronika offered an important discussion on the many ways one can get injured by tortilla chips. “When you are eating tortilla chips and one breaks in half and goes sideways as you’re chomping down and gouges the roof of your mouth.”

LazuliArtz took the trauma a step further by sharing how once a chip got stuck in their throat and, “it was not fun to have a perfect triangle wedge stabbing into my esophagus haha.” And Bobtheowl called attention to the following problem: “Also when a chip goes sideways and jams itself between two of your teeth.” Bob, we feel this. We have had to walk all the way upstairs to get dental floss in this very situation.

And then there are the indignities of chips breaking when you dip them. (EmDubbbz pointed out the indignity of “when it breaks off in the dip/salsa and you gotta send in a recon chip and end up losing that one too.”) Moral of the story? Stop eating evil tortilla chips that are trying to kill you. Or chew more slowly, maybe.

Do: “Test shake” your food

Have you ever had “a piece of food that looks like it’s about to fall off your fork or spoon so you wait and it doesn’t then it falls immediately as you go to take a bite?” Well LovableKyle24 has — and 27.5 thousand people agreed it was a harrowing experience. User Statakaka suggested doing, “a small vibration-like shake so it falls, if it survives your shake you know it’s a sturdy one and it won’t fall when go for the bite.” Solid advice, Statakaka.

Don’t: Get a cold

We can all agree having a cold sucks. But have you tried eating with one? When Reddit user ThatOneBananapeel said they were irritated by “the fact you can’t breathe and have to take one big gulp of air after each bite,” HSYT1300 agreed: “You’re stuck deciding whether to starve or suffocate.”

So what are we, stuffed up but hungry, to do? User therealleotrotsky suggests, “To clear your nose so you can breathe, hold your breath until it starts to get uncomfortable. Lack of oxygen causes your nasal passages to dilate.” (Another user corrected that it was excess Co2, but does it matter? We’re just trying to get food down our gullet without self-asphyxiating here). If this doesn’t work, there’s always spicy food, exercise, and Mucinex. (But don’t get addicted.)

Sure, they’re cute, fruity, and chewy, but did you know they can pull your teeth right out of your gums? User Complete_Entry horror story went thusly: “I once cleanly tore out 2/3 of a tooth while eating gummy bears. My dentist was shocked…There was no mess, no trauma, just 2/3 of the tooth was just… gone. I don’t eat gummy bears anymore.”

Nosnhoj14 concurred that he had also lost a tooth when it got lodged in a Starburst, and Mangarooboo further frightened TF out of us when they casually proclaimed, “I lost two teeth from a cold Rolo.” But it could be worse: You could be like Lifehacker’s own Mike Winters, who shared that he once shattered a crown on a Dunkin’ bagel while waiting at the DMV at the beginning of COVID (then left empty-handed after four hours of waiting due to a paperwork issue). You can’t get lower than that.

Do: Eat in your car at work

If you are (un)fortunate enough to be back in the office, do not attempt to eat pleasantly, in an uninterrupted fashion, while seated at your desk (even with headphones in, watching videos on your phone). It’s not gonna happen. Whether it’s someone commenting that your meal looks or smells gross, your phone ringing, people throwing shade on how unhealthy your Pop Tarts are, or Paul from accounting busting out, “Lunch time! Oh I love (that restaurant). Did you get enough for everyone?” your co-workers will find a way to bug you every time.

You’re better off chowing down in your car if possible, or at least taking a very long alternate hallway back to your desk so fewer people can harass you along the way.

Do: Save your drink for the end of the meal

Ratafes has had it with “the moment when i realise my drink will not be enough for my food” and nearly 5,000 people agreed, sharing their own experiences of that terrible moment. Does SURPRISE_MY_INBOX have a solution? “Idk if anyone else does it, but I just subconsciously do not take a drink until the meal is done, then chug whatever I grabbed for a drink.”

SirTopher616 agrees: “Yes! My whole life people have been weirded out by this. I just don’t really feel thirsty while I eat and I don’t wanna mess up my flavours with some whack arse fruit taste or whatever I’m drinking. As soon as I’m done eating? It’s on.” Honestly, we were shocked so many people can even get food down without a drink. Just how big are your esophaguses? Don’t answer that.

Proguyisaprorlly bemoaned the fate of, “[s]neezing when eating and everything on your mouth is now on the wall.” Bpalmerau chimed in that the breakfast cereal sneeze is particularly precarious. Shwhjw lamented, “when you take a MASSIVE mouthful of rice and a little tiny grain just tickles the back of your throat, then a second later your family and the table are coated in it,” followed by, according to jwong210, one getting “stuck in your nasal passage.” It’s an all around respiratory fiasco.

While some helpful Redditors had helpful advice (“Maybe cover your mouth?”), in the words of the wise RandomGuy886, “But sometimes you have no time to react.” We’ve all been there, man.