Inflatable Paddleboards Are Fun, With a Catch

We’ve talked about the joys of getting out on the water, and explored the world of inflatable kayaks (a great option for kids or casual boating, but not for serious kayakers). Now it’s time to check out the watercraft that’s fast becoming the most popular at my local lake: the inflatable paddleboard.

Stand-up paddleboards (also called SUPs) look kinda like surfboards. That’s pretty much it. You stand on top, and propel yourself with what looks like an elongated canoe paddle. Despite the name, you can sit down or kneel on them if you like.

Inflatable paddleboards are just as sturdy as regular ones

The most shocking thing about an inflatable paddleboard is that it works. I would never have thought to shop for an inflatable one until I heard from a friend who had tried one. We were out on the lake at the time, renting normal (non-inflatable) boards from the same place that rents out kayaks. She told me that the inflatable she had tried was just as stiff and sturdy as the ones we were currently on. Huh.

Fast forward a few years, and prices finally dropped into the low hundreds; paddleboards, like kayaks, are expensive, and you can easily spend over $US1,000 on a top-of-the-line model of either. But where inflatable kayaks are cheap and flimsy, inflatable paddleboards are neither. I got the least expensive board I could find, and in a package with a paddle and hand pump it cost around $US200.

The catch is in how you inflate it

The reason inflatable paddleboards are so much more solid than inflatable kayaks is that they’re inflated to a much higher pressure.

When I pump up the kayak, it’s good to go as soon as it feels firm to the touch. A few minutes’ work with the hand pump is all it takes to get there, and I’ve even let my 5-year-old blow it up herself.

My paddleboard, on the other hand, came with a pump with a pressure gauge. You’re supposed to fill it to a minimum of 10 PSI, with a sweet spot around 12 and a warning not to go above 15. (Your paddleboard may vary, but these are typical numbers.) The board felt firm around 0.5 PSI. In other words, a SUP needs something like twenty times as much air as a similarly sized kayak.

Doing this with a hand pump is a hell of a workout. It took something like ten straight minutes, and every muscle in my upper body was sore the next day. (And I’m a person who lifts weights on the regular, so good luck to the rest of you.) Once, the deflation valve was set incorrectly, leading to a few seconds of pssssssshhhhht when I detached the pump. I was back down to around 0.5 and had to start over. 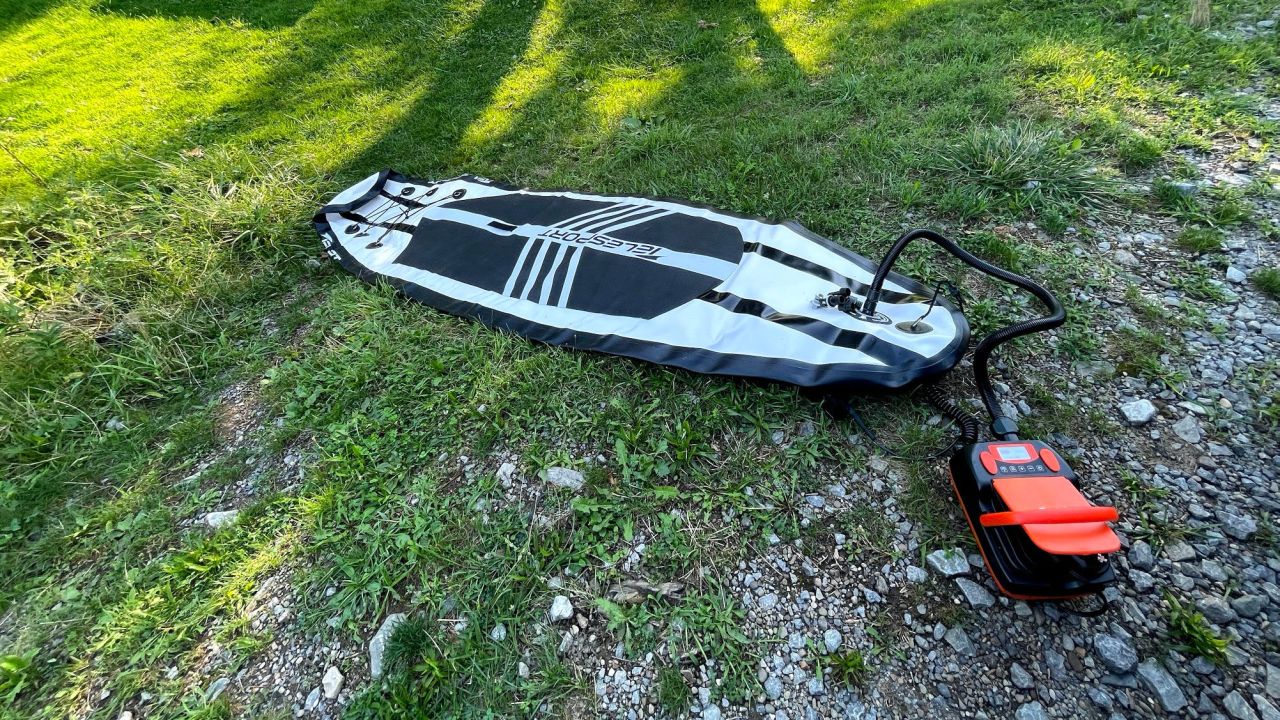 Why you need an electric pump for your paddleboard

No biggie, I thought, I’ll pick up an air mattress pump at the store. So I did, and I attached it, and I just… sat there. For a while. And googled “paddleboard electric pump” to see what you’re actually supposed to use.

It turns out a proper paddleboard pump is one that can:

It turns out that a pump that fits these requirements is not cheap. Everything under $100 had real sketchy reviews. I splurged on a $US150 ($205) pump that has all the features above, plus a battery so it doesn’t have to be attached to your car’s power outlet while it pumps.

OK, now for the fun part! I love the simplicity of a paddleboard, compared to a canoe or kayak: you just plop it in the water, plop yourself on top, and off you go.

I wear flip-flops to walk down to the water, then take them off and tuck them under the bungee at the front of the boat. You want to be barefoot so your feet can hold onto the board and help keep your balance (although I have seen people wearing water shoes, if you prefer that.)

Mine has a leash so the board stays connected to my ankle even if I capsize. And not to be a pessimist, but: you probably will capsize. There is a reason paddleboarders usually wear swimsuits.

I also wear a belt-style PFD (it inflates if you pull a string) rather than a regular lifejacket. I’ve never needed to inflate it, since I can swim. If I fall in I just climb back on the board.

Paddling is a bit trickier than in a kayak, and it took me a few outings to get the hang of it. If you’re doing it right, you don’t need to switch sides every few strokes; you just steer by altering your paddle stroke. Here’s a video demonstration:

Once you get the hang of it, paddling is pretty straightforward, and you can enjoy your time out on the lake. I gravitate toward my kayak when I want to move, and I take the paddleboard out when I’m more in the mood to chill. You can lie down on a paddleboard in the middle of the lake to sunbathe or meditate or whatever purposeful name you want to give to just lying around doing nothing (drop a fishing anchor if you want to be sure you don’t float away).

Paddleboard yoga is also very much a thing. I wouldn’t recommend it for your first time, though; just standing up is enough of a balance challenge if you’re not used to it.