Internet users increasingly want a more anonymous browsing experience, which has a major impact on advertising, eCommerce, and the online economy as a whole. If a company can’t track you with third-party cookies, it’s harder to make money. Google is testing a new technology to replace cookies called Federated Learning of Cohorts (FLoC) that, according to Google, will help maintain user privacy and current business models for online companies.

You can read Google’s overview of the technology here, but the gist is that users will have a unique FLoC ID. Your ID is technically anonymous, but you’ll be grouped in with other users with similar internet history — your “cohorts.” Instead of selling an individual’s data, companies like Google will sell cohort data to advertisers.

But while “private” on paper, as we’ve previously explained, that’s not entirely true. In fact, FLoC is likely to be just as intrusive — if not more — than third-party cookies. Depending on the size of a cohort and the number of cohorts a person belongs to in the database, someone could plausibly be identified, among other serious concerns.

The good news is FLoC will only be implemented to Chrome — no other browser will use FLoC, not even other Chromium browsers like Brave, Edge, or Vivaldi. It also isn’t ready for full-scale implementation yet. In fact, Google delayed FLoC’s rollout for Chrome. However, it’s currently in an early trial phase, and it may be present on your browser right now as a new feature called “Privacy Sandbox.” To be fair, less than 1% of Chrome users are part of the Privacy Sandbox test, but the test may expand over time, and it’s possible you’re enrolled in this new form of tracking without even realising it.

Luckily, it’s easy to check if Privacy Sandbox is enabled, and if it is, you can block it or opt-out.

How to check for and disable Privacy Sandbox (FLoC) in Chrome

Privacy Sandbox is only active for a tiny fraction Android and desktop Chrome users in the United States, Australia, Brazil, Canada, India, Indonesia, Japan, Mexico, New Zealand, and the Philippines. It is not on iOS devices (yet). 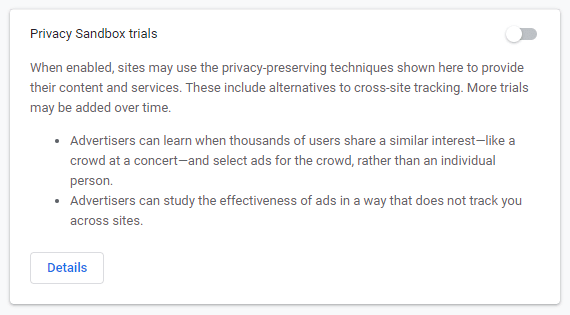 Still, it’s worth checking to see if the feature is active. These steps apply to Android, Windows, Mac, and Linux versions of Chrome:

Alternatively, the “Am I FLoCed?” website quickly checks for the Privacy Sandbox trial on Chrome. If the test is positive, use the steps above to turn off FLoC tracking.

If you don’t see the option in Chrome’s settings, then you’re not part of the test. That doesn’t mean you won’t be added to the Privacy Sandbox trial in the future, however. Thankfully, Chrome users can preemptively block FLoC tracking using this DuckDuckGo browser extension.