I’m sure I need not remind you of the Murder Hornet Saga of 2020, but you should know that 2021 is trying to top what seemed uptoppable — by gifting us (or at least Texas) with the emergence of a type of arachnid some folks lovingly refer to as “acid-spitting ‘land lobsters.’” To be fair, that’s not a totally accurate description of this creature… well, except for the whole acid thing.

Summer rains bring vinegaroons out of their burrows in search of food and love. Vinegaroons are about 3 inches long and relatively benign unless you happen to annoy them. They can pinch with their heavy mouthparts (pedipalps) and shoot a well-aimed spray of 85% acetic acid (vinegar) from the base of their “whip” to protect themselves.

Anyway, those funky guys got me thinking about a subreddit I particularly enjoy, called Animals I Didn’t Know Existed. Here, redditors post all sorts of weird, creepy, and otherwise amazing creatures that we definitely didn’t know exist. Let’s check out a few, shall we?

I’m going to start with something soothing to get us all in the mood to appreciate the finer details of nature. These multi-coloured blanket octopuses almost look like freaking mermaids, and we don’t deserve such beauty and grace. Also, they’re arguably smarter than we are, according to the Great Barrier Reef Foundation:

Octopuses are known for their intelligence and the blanket octopus is no exception. They can learn and recall, as well as mimic behaviours exhibited by other octopuses. They have also been observed to demonstrate temperaments and preferences towards different behaviours and creatures. This, combined with their creative method of protection and hunting, suggests a high intelligence for the elusive octopuses. 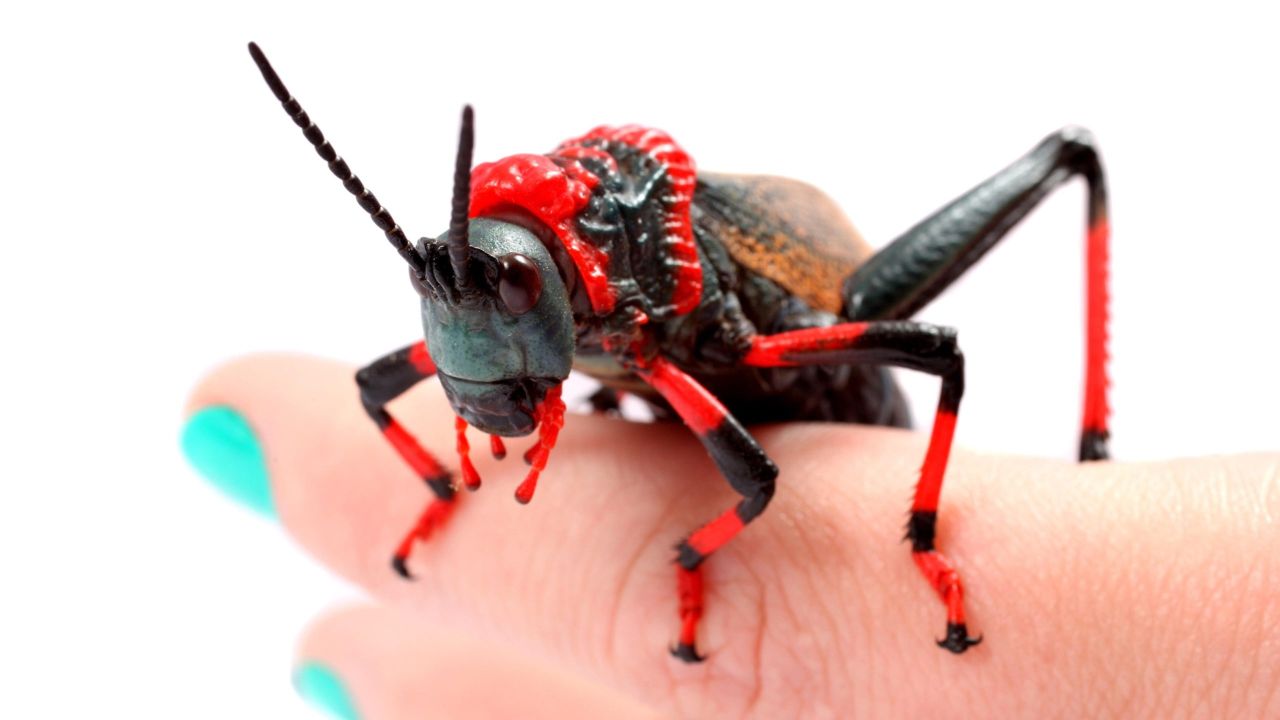 No, this guy is neither the spider who bit Peter Parker, nor is he “just a cricket with a cool paint job,” as two of my colleagues suggested. This is a grasshopper who eats such a toxic diet that he can look this cool and not fear being eaten himself. The Phillipskop Mountain Reserve explains:

What makes the koppie foam grasshopper so unappetising is its diet. Unlike other grasshoppers that eat rather innocuous plants (though few grasshoppers solely eat grass), this one enjoys eating toxic, distasteful and noxious plants, such as members of the milkweed family. It then has the ability to keep the toxins in its body, an ability known as sequestration. Should a predator then decide to make a meal of this grasshopper, it will end up rather worse off than just a bad stomach-ache.

They are fairly solitary creatures, these northern ghost bats, appropriately named for their unusually pale colour. As the University of Michigan Museum of Zoology reports:

Northern ghost bat individuals eat around 1,000 insects a night. This could affect insect populations. These bats are rare, so their effect on the ecosystem are probably slight and can only be a hypothesised based on the effects of other bats in the area. Also, bat guano is very important to plants, providing excellent fertiliser.

As there are probably only about 1,000 living specimens of this porpoise, which lives in the Yangtze River in China and is known for its playful smile, it is considered critically endangered. As Nature.com reports:

The Yangtze finless porpoise is one of the world’s few remaining freshwater cetaceans. It is found only in the Yangtze, as well as in two adjoining lakes, called Poyang and Dongting. Scientists hope that the porpoises can avoid the same fate as the Yangtze river dolphin, or baiji (Lipotes vexillifer), which was declared effectively extinct after the 2006 survey. 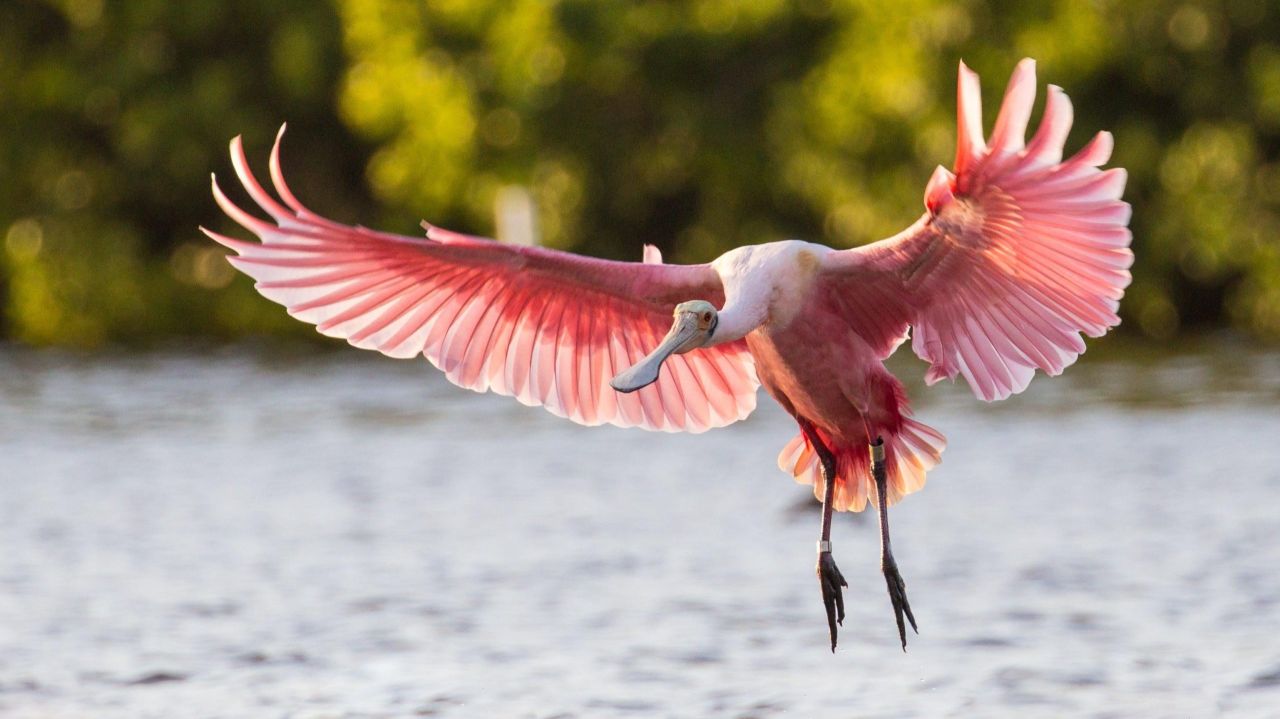 Meet my new favourite bird, the roseate spoonbill, who flies with majestic pink wings and its neck outstretched in what looks to be a pretty uncomfortable position but must be suiting him just fine. As All About Birds describes:

The flamboyant Roseate Spoonbill looks like it came straight out of a Dr. Seuss book with its bright pink feathers, red eye staring out from a partly bald head, and giant spoon-shaped bill.

This massive cicada, which can have a wingspan of about 6 or 7 inches, was shared with us by Reddit user u/el_pablo, who said they “thought it was a new tech toy,” and, honestly, same. As Cicada Mania describes:

The Tacua speciosa is a beautiful cicada native to the countries Malaysia & Indonesia, and the islands Borneo & Sumatra, and likely other islands and nations of the area. Tacua speciosa are well known for their large size, opaque wings, black body, striking yellow/chartreuse pronotal collar, red cruciform elevation, and cyan or yellow tergites.

They have two pairs of wings and strong hind legs for catching prey, but even so, Orkin says, “scorpion flies generally fly slowly and in erratic patterns.” 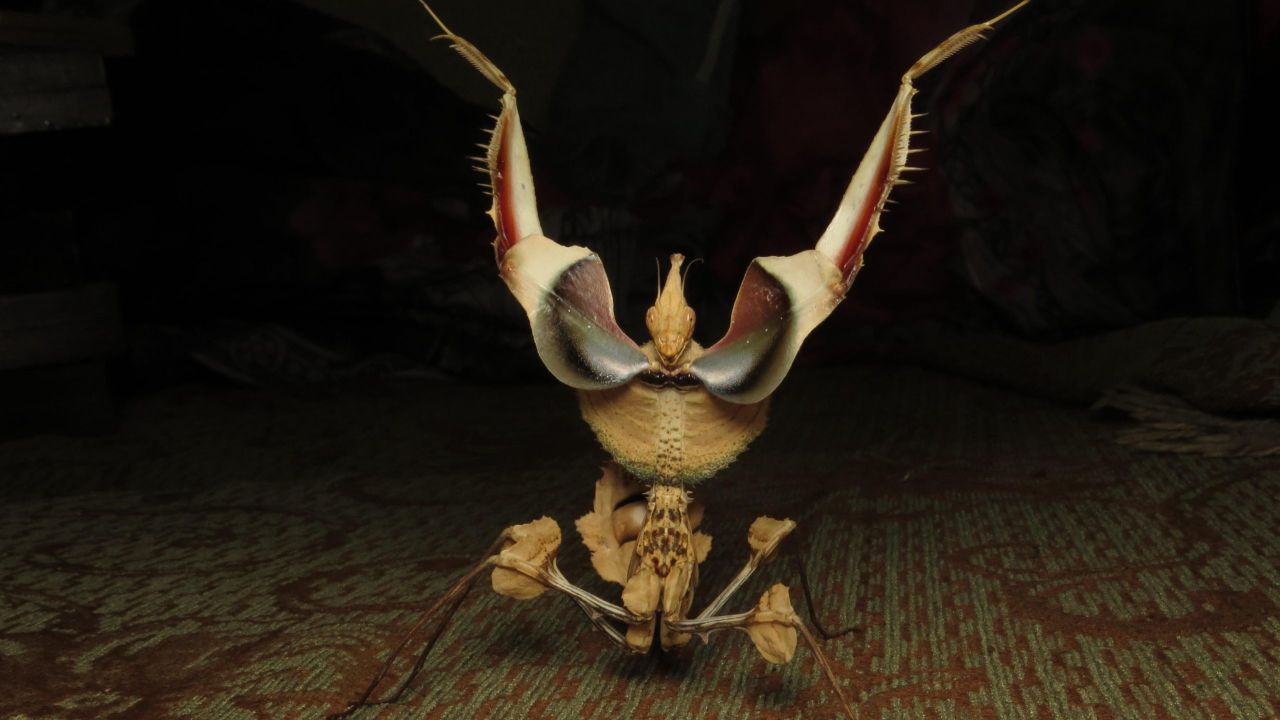 The Devil’s Flower Mantis is among the largest species of praying mantis, and it might be the largest that mimics flowers. As All Species describes:

In the event of being confronted by a predator, Idolomantis diabolica initiates a deimatic display in an attempt “to scare off or momentarily distract a predator”. Its front legs, specifically the femur, are raised to expose the conspicuous patterns depicted on the bottom of the thorax and abdomen. Similarly, the wings display a combination of vibrant colours. Observational analysis of Idolomantis diabolica in captive settings revealed an additional tactic of shifting its wings left to right to startle and confuse predators.

He’s doing that cool “scare you off” move in the photo above.

This butterfly is known for its transparent wings and shimmering iridescent hues of green, blue, and pink. As Learn About Butterflies teaches us, they are found in Ecuador, Peru, and Bolivia:

As it flutters rapidly around bushes and shrubs it could easily be mistaken for a damselfly, and it is not until it settles under a leaf and stops fluttering that it reveals its true identity. The butterflies are rarely encountered. They fly in full sunshine but periodically rest beneath leaves.

Maybe I’m weird, but I could watch this guy scamper along the bottom of the sea all day. I hear a little “click-click-click-click-click” noise in my head as he cruises along, tapping those skinny, finger-like pelvic fins on the floor. He’s fun. Britannica says:

Sea robins are elongated fish with armoured bony heads and two dorsal fins. Their pectoral fins are fan-shaped, with the bottom few rays each forming separate feelers. These feelers are used by the fishes in “walking” on the bottom and in sensing mollusks, crustaceans, and other bottom-dwelling prey. 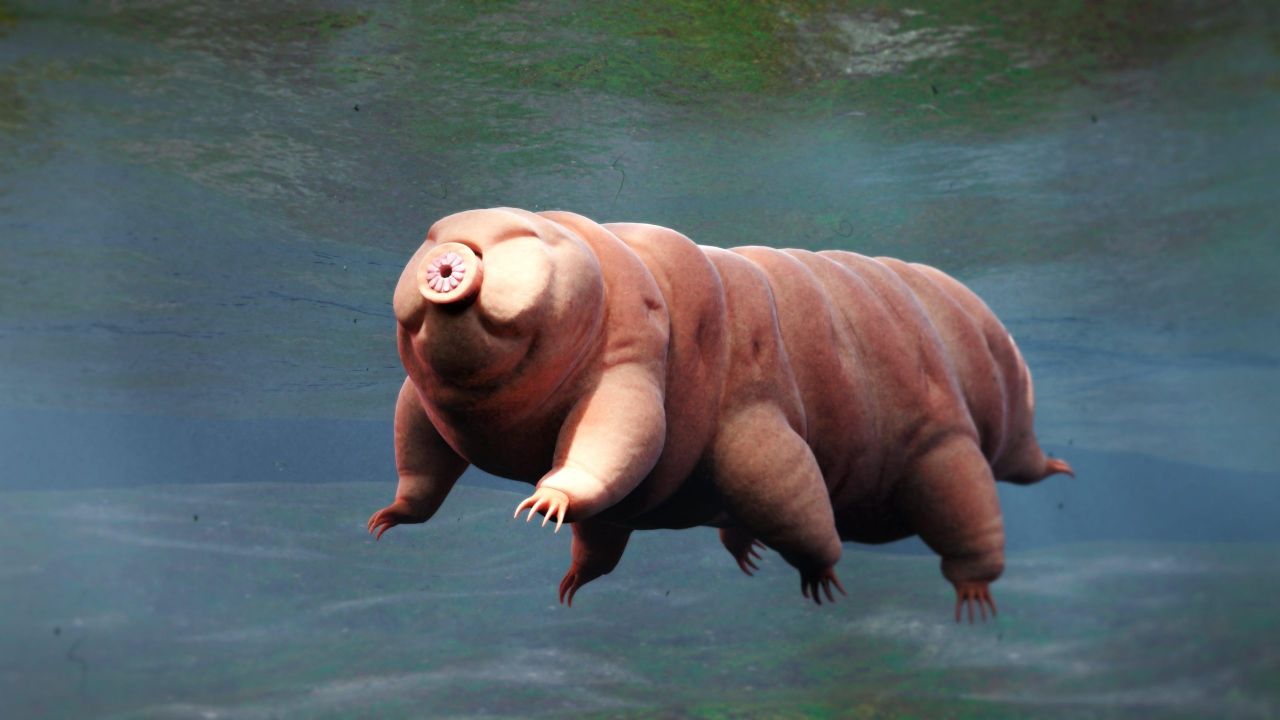 I teeter back and forth between thinking this is the creepiest thing I’ve ever seen or kind of cute, actually. But when I realised it was a microscopic organism and not, like, the size of a bear — as its nickname “water bear” might imply — I decided we could opt for cute. Plus they can (and have) survive unprotected in space, which is something we can’t claim. As Live Science explains:

Research has found that tardigrades can withstand environments as cold as minus 328 degrees Fahrenheit (minus 200 Celsius) or highs of more than 300 degrees F (148.9 C), according to Smithsonian magazine. They can also survive radiation, boiling liquids, massive amounts of pressure of up to six times the pressure of the deepest part of the ocean and even the vacuum of space without any protection. A 2008 study published in the journal Current Biology found that some species of tardigrade could survive 10 days at low Earth orbit while being exposed to a space vacuum and radiation. 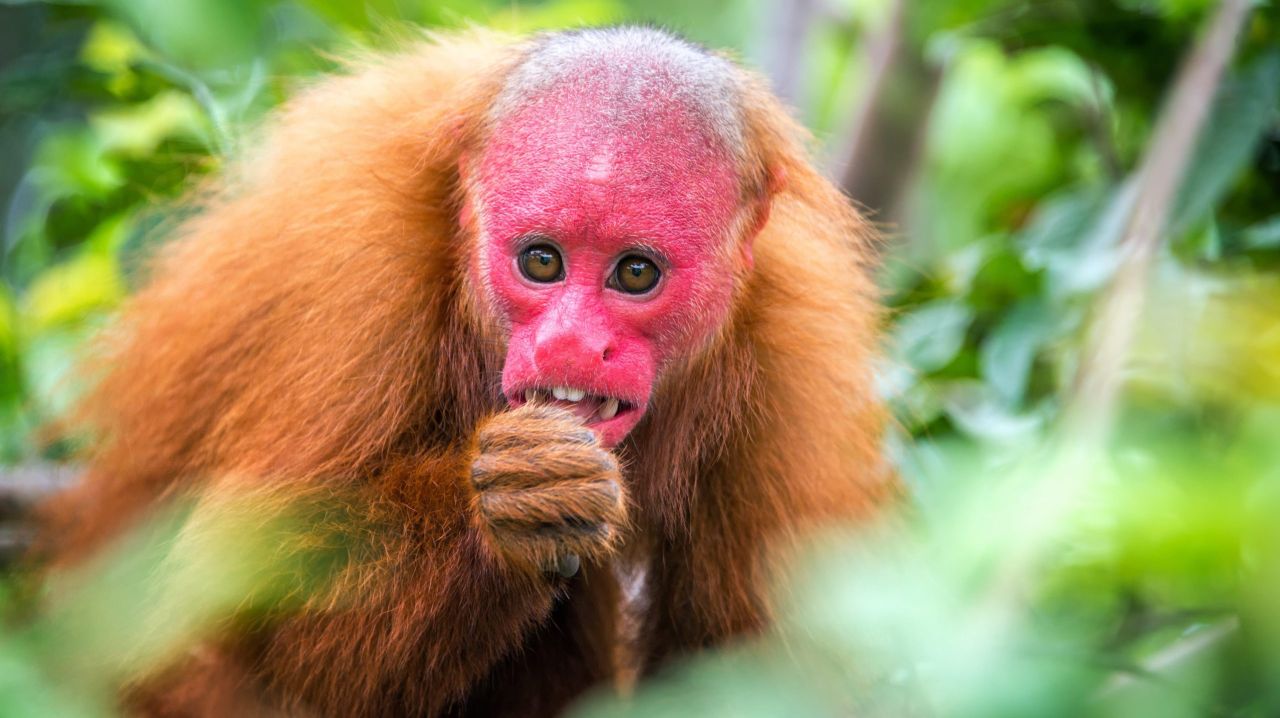 This bright-faced guy is as good a place as any to wrap up our journey through the unknown. National Geographic describes him (or her, I don’t know) this way:

Bald uakaris are small South American primates with striking bald heads and bright red faces. (They may be attractive to mates because malarial or sick animals develop pale faces.) They have a long, shaggy coat that varies from reddish brown to orange. These monkeys live only in the Amazon River basin, preferring permanently or seasonally flooded rain forests and locations near water sources, such as small rivers and lakes.