Try These Fixes to Keep iOS 14.6 From Draining Your Battery

In the days following iOs 14.6’s rollout, masses of iPhone owners report sudden abysmal battery life and even overheating. The issue is widespread, judging by the many posts on Apple’s Support forums, Reddit, and across social media.

At the time of writing, Apple has not disclosed the cause nor indicated if a patch is on the way, but there are a couple of potential workarounds you can try in the meantime.

Delete apps using too much battery 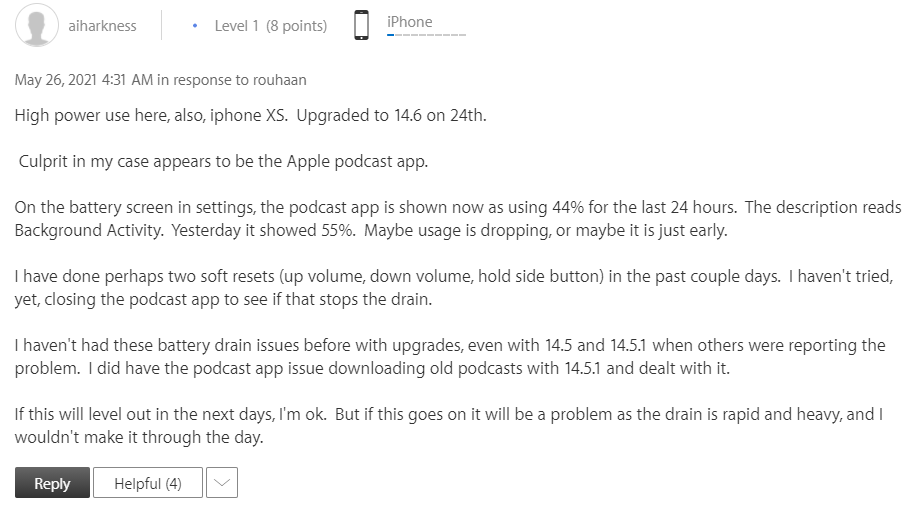 As ZDNet reports, some users notice the Apple Podcast and Apple Music apps use up way more system resources than normal and deleting the apps solved the battery drain problem. However, it’s not a universal fix. The apps work just fine for some users, and others don’t have them installed at all, implying the issue originates elsewhere in the OS.

You can check to see if Apple Podcasts, Apple Music, or any other app is using up extra power under Settings > Battery. The menu lists all apps on your device and how much battery life they use. If any are taking up too much of your iPhone’s juice, delete them and see if that fixes the issue — but again, it doesn’t work for everyone.

Other users claim turning off the auto-brightness setting restores normal battery use. Of course, just like with the Podcast app solution, it doesn’t appear to work for everyone — in fact, it seems less effective — and plenty of folks say they already have auto-brightness off and are still experiencing the issue anyway.

Still, it’s worth a shot. The auto-brightness setting is located in Settings > Accessibility > Display & Brightness.

It’s possible these unofficial workarounds are mere coincidences, but they’re the best we have until Apple — or one of the numerous users investigating the issue — crack this one and a patch is issued. To that end, if you’ve discovered a way to stop the iOS 14.6 battery drain bug, drop a comment to help.