The Best Features in Android 12 Beta 2 (So Far)

Android 12 Beta 2 rolled out this week for all beta participants, adding a batch of new features and settings for testers to play around with. While the Android 12 beta is still only available for Pixel devices, don’t let the FOMO get to you; Android 12 is still several months away from a stable release, and this most recent build sounds like it’s the buggiest one yet.

That said, there’s a lot of cool stuff in this update. Below, we’re ticking off the biggest new tweaks in Android 12 Beta 2 that every Android user should know about.

First is the new privacy dashboard, which makes it easy to see which high-level permissions each app on your phone has been granted. The ring chart at the top of the page shows how often your device’s camera, location data, microphone, and other primary features have been used in the past 24 hours. Below that is a list of all possible permissions apps can ask for; tapping one of the categories brings up a list of third-party apps that have permission to use that feature, making it easier to manage app permissions from a single menu. System-level apps, such as your phone’s stock camera app, will not appear in the list by default, but preinstalled apps like Google Maps will.

Similarly, a privacy indicator now appears at the top of the device’s screen whenever an app is using your camera, mic, or other features that could be a privacy concern. When the alert first appears, you will see icons for each of the features being used for a few moments before they minimise to a simple green dot. Tapping the dot opens the Quick Settings menu, which now has toggles for blocking camera and mic access.

One of the biggest changes in Android 12 involves a visual overhaul to the core Android interface. Android 12 adopts the Google Material design aesthetic, and Android 12 Beta 2 enhances the look with ‘Material You’ themes that change the colour of your phone’s interface, notifications, and other elements to match your wallpaper.

The aesthetic redesign extends to the media controls and volume slider, which now take up less space on your lock and notification screens and adapt based on your Material You theme. Similarly, the weather and date home screen widget has a bolder font.

Rounding out the noteworthy additions in Android 12 Beta 12 are a grip of new shortcuts — including a new, smaller Power Menu. Pressing the power button in Android 11 brings up small menu with shortcuts for device settings, your Google Pay wallet, and power controls. On Android 12, that menu now includes power off, restart, emergency call, and lockdown buttons, while holding down the power button itself calls up Google Assistant. You can also access this menu through a new “Power Button” toggle in the quick settings. 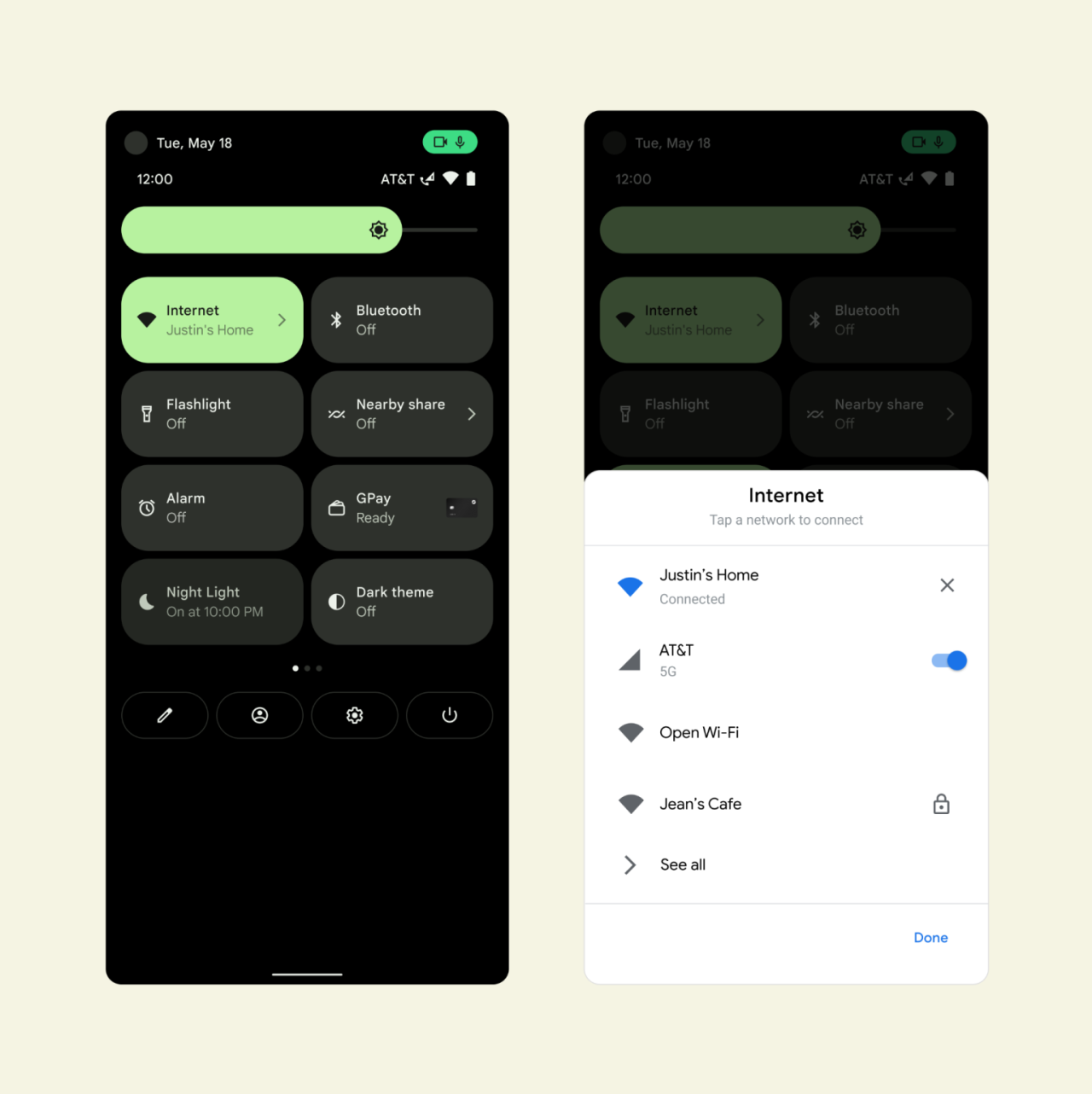 To account for the new Power menu, Google has moved the Google Pay wallet and Device Controls shortcuts to Quick Settings (they were in the Power Button menu on Android 11). There is also an Internet button you can use to quickly toggle between wifi and mobile data, view and connect to available networks, and jump to your device’s full network settings. The previously mentioned privacy blocks for your camera and mic will also appear in the Quick Settings menu.

The Android 12 beta 2 is only available on Pixel 3, 3a, 4, 4a, and 5 smartphones, including XL and 5G models. Anyone can enroll their device in the beta program, but we recommend you don’t install it on your main phone until it’s in its final stages — preferably until the full release this fall. Each iteration of the beta brings with it new, unfinished features, and so far Beta 2 seems to be the least stable beta build yet.

That said, if you have a secondary Pixel device — or don’t mind dealing with app crashes and other bugs — you can join the Android 12 beta program here.