In April, Apple made some long-overdue changes to its Podcasts app, part of an overhaul of the company’s general approach to the podcasting market that will allow podcasts makers to charge subscription fees for their content via Apple’s homegrown app. Unfortunately, the changes have proved frustrating to many longtime app users — but there are ways to manage them.

The overhauled version of the app, which launched with iOS 14.5, provides more recommendations, changes its podcast pages (users now “follow” podcasts rather than “subscribe” to them) and, yes, allows for paid subscriptions. But it also caused some problems: users encountered issues syncing podcast episodes across devices or saw them randomly downloading old episodes, even as they had to contend with changes to the app’s navigation tools. In May, Apple released the iOS 14.6 update, offering some fixes, but there’s still a lot to get used to.

The revised app seems to be aimed more at serving podcasting networks and increasing discoverability rather than making it easy to manage a library of existing subscriptions, which has rubbed some folks the wrong way. The NextWeb called the update a “crime against humanity.” Others, like John Gruber at Daring Fireball, welcomed some of the changes. However you feel about Apple’s vision for the future of Podcasts, there are ways to tweak the app to get it to function more like it used to, and get back to listening. Take a tour of the new Apple Podcasts app

How to navigate your Podcasts library

Before the recent update, the app made it easy to find a list of the latest episodes you’d downloaded. You can still do that, but it takes a few more steps — go to the Listen Now section and choose “See All” to find a reverse-chronological list of the podcasts episodes you have downloaded.

The new Library section is less straightforward, and provides you with a couple of options: How to use swiping in Apple Podcasts

On each of the above sections, you can swipe on an individual episode to do something with it: 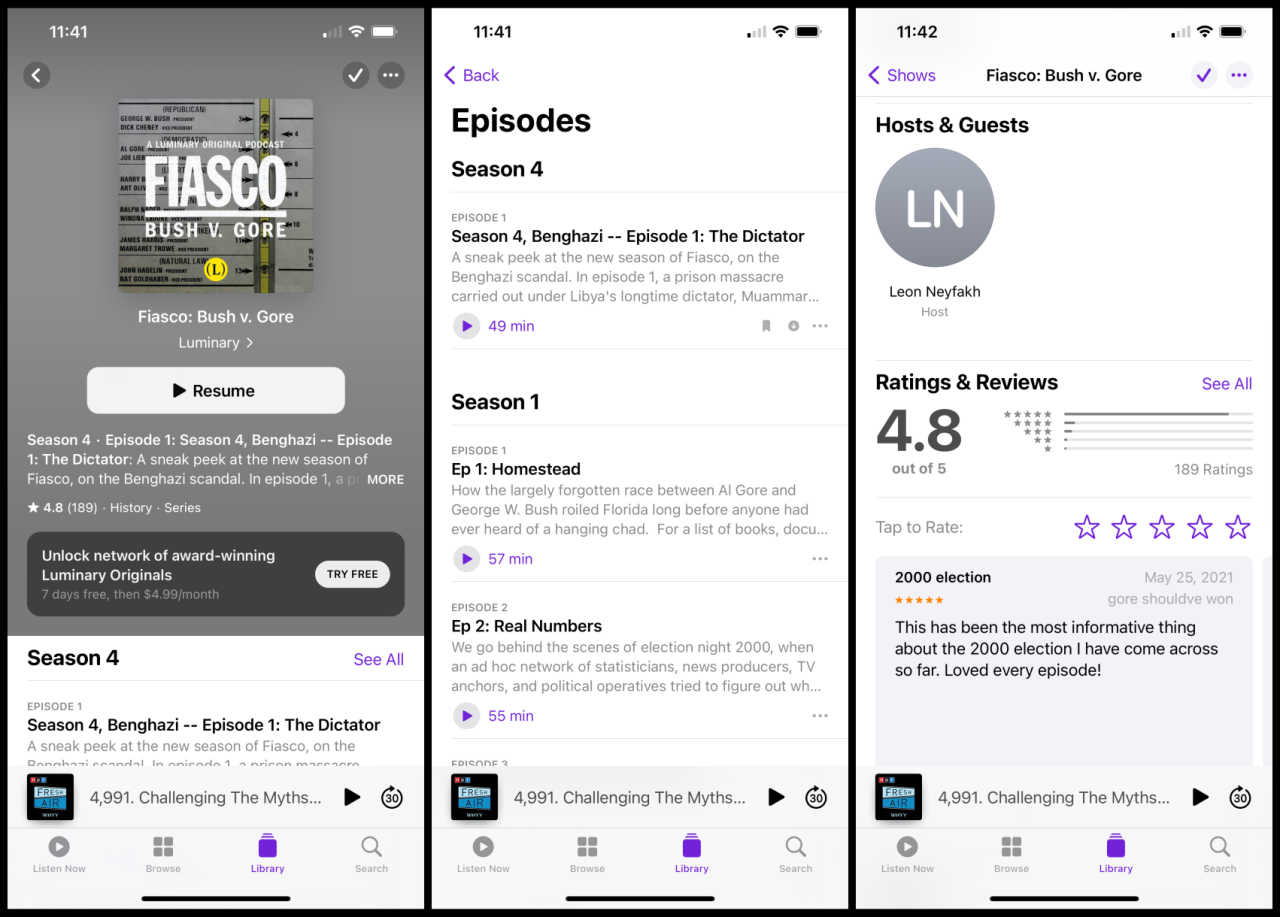 The dedicated pages for specific shows are pretty straightforward: They display the cover art and description of the show, and there’s a button that allows you to resume whatever episode you were most recently listening to. You can also view other available episodes, with options on each to download, play next, save, share, etc.

This is also where you can “follow” (think “subscribe to”) a podcast or adjust its settings. Shows you are following are marked with a checkmark; tap the three little dots will allow you to adjust the settings on that individual show. This is also where you’ll be able to sample free episodes or subscribe to a paid channel, subscribe to a show’s respective network, leave a review, or access the profile of the podcast’s creator (which also lists their other podcasts, if any). If you’re a longtime Podcasts user, all of the above changes might sound a bit overwhelming. Some critics of the update blasted it for messing up the curation and settings that they had gotten used to, and that in many cases, made a mess of their libraries. I’m one of them — but here’s how I went about cleaning it up:

Find an alternative to Apple Podcasts

After all that, if Apple’s changes have proved too disruptive, it might be worth pulling up stakes and migrating to another app. If you’re looking for recommendations, Lifehacker has got you covered.