How MoCA Made My Home Network Faster Than Mesh Wifi

I love fussing with wifi, but when I’m building the backbone of my network in a new location — a house, apartment, or wherever — I tend to go wired as much as I can. Wireless bridges and tri-band mesh/extender setups are great and convenient, but I always appreciate the stability and speed of an Ethernet cable.

When I recently offered to help my friends set up their house with a wired backbone, I came across a fun problem: No Ethernet connections in any of their rooms. That didn’t surprise me very much, as that tends to be a more modern convenience that older houses simply don’t have. However, it is a bit annoying, especially when you don’t have a lot of time to get something up and running and you don’t really want to cut holes in the wall and thread cables yourself. (I’ve done it; they just weren’t too keen on this taking so long, especially when they could just use wifi and call it a day.)

The ingenious solution to this problem? MoCA, or “Multimedia over Coaxial.” I’ve known about the technology for a long time, but never had the time (or need) to play with it until now. My friends’ house was wired with coaxial cables in every room, which made this an ideal solution. I could just use MoCA instead of Ethernet — MoCA 2.0, technically, which gives up to a full gigabit worth of speed and should be more than adequate (even if it doesn’t run that fast) for my friends’ ~400Mbps internet plan. And unlike me, they don’t really send a bunch of files around their living space, so maxing out the speed wasn’t a major concern, either.

I got my hands on a two-pack of TrendNET TMO-311C2K adapters and got to work, which took all of five minutes because I was acting the fool. It should come as little surprise that plugging in the MoCA adapters to various coaxial ports around the house achieved absolutely nothing. No signal. Had I fussed with MoCA previously, this wouldn’t have come as a big surprise. But after coming from Ethernet land, I just expected everything coming out of the wall to be connected together. Not so much when it comes to your coaxial connections.

Part of that stems from the very nature of running cable around one’s house, period. Unlike Ethernet, where you link together 16 different cables with a relatively inexpensive switch and each connection could still achieve a full 1Gbps of theoretical maximum speed, connecting eight different coaxial cables together is going to result in attenuation, or signal loss, as a result of how you’ll need to split the signal. That might not really matter when you’re just looking to take one cable connection and run it to two rooms, but if you’re looking to give every room a solid coaxial connection, you’re going to need an amplifier, at minimum.

That’s just one big way to say that I wasn’t too surprised to find that many of the coaxial cables around my friends’ house simply weren’t connected to anything. I was eventually able to confirm this by tracing the wires to the outside of the house, where I found where all the disconnected cables terminated. I then went and picked up one of these to test which cable went to which room in the house:

I also grabbed a MoCA PoE filter and a single high-quality splitter to give the house the best possible signal it could. And, as you can probably determine, my goal was to use MoCA to connect a downstairs room and an upstairs room with coaxial-based Ethernet. Since the upstairs room is where the house’s cable modem sat, I’d be able to:

In other words, the cable connection would be doing all the heavy lifting for data around the house, and I’d be able to connect both coaxial-based devices (the cable modem) and Ethernet-based devices (everything else) thanks to the MoCA adapters. 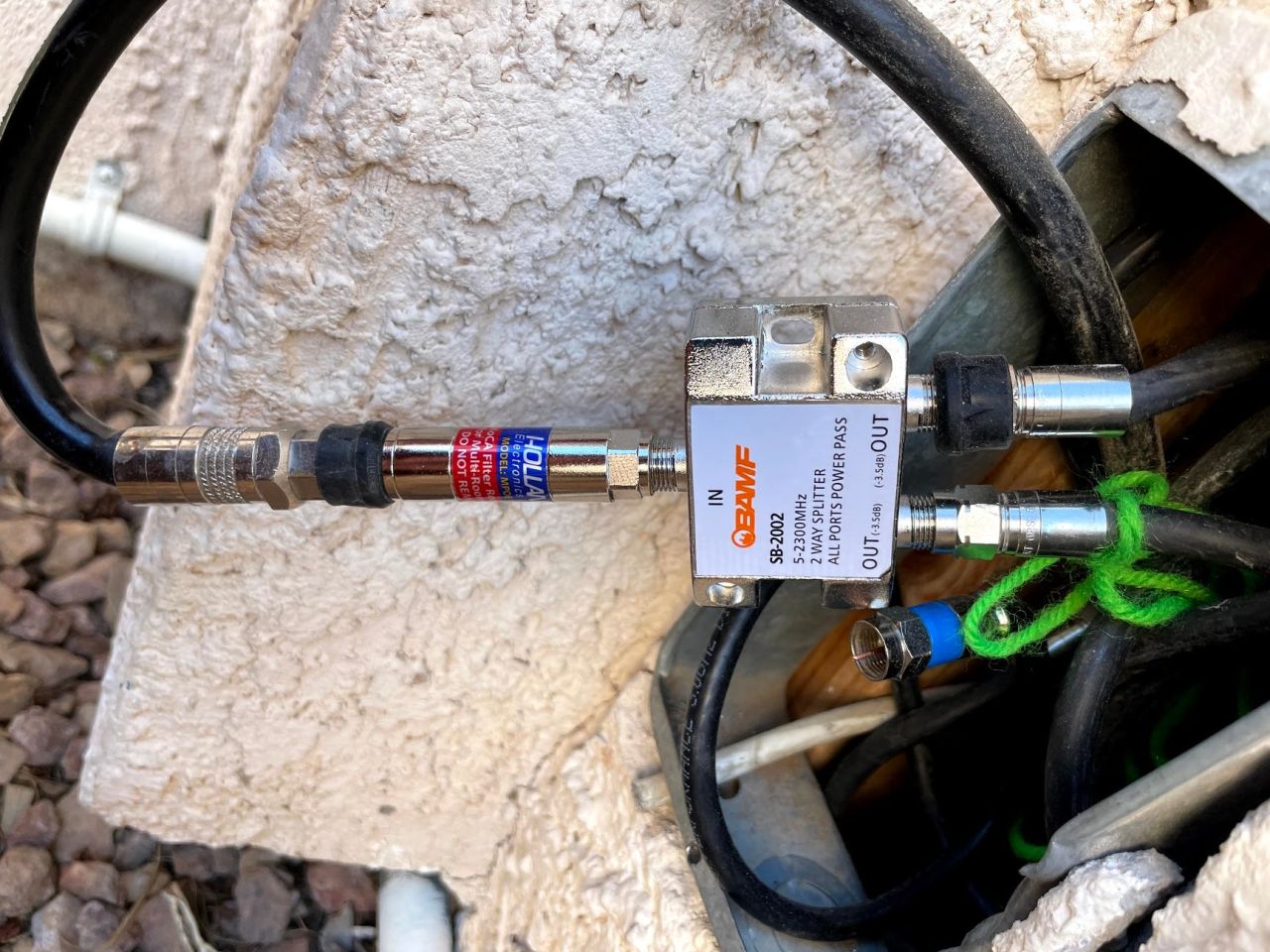 Easy as pie. And I’m not just being glib; once I connected the PoE filter and hooked up the splitter, joining both rooms’ cable connections, the MoCA adapters lit up to let me know that they could see each other. Five minutes later, my network was up and running, and it couldn’t have been any easier. Both floors of the house now had wifi, and was a much speedier solution than the mesh setup my friends were dealing with before. (Convenient as that might have been, it didn’t allow my friends to max out their speeds nearly as much as they now experience with MoCA as the backbone of their network.)

Me? I’m going to add MoCA to the list of tools in my networking arsenal. While I used to have a mindset of, “We’ll just string Ethernet cable around everywhere and that’ll look great,” it’s a lot cleaner to be able to connect a little $US50 ($64) adaptor to a room’s existing coaxial connection and call it a day. Pricier, sure, but now I don’t have to fuss with cable management all around the house. I wonder what I’ll do with this 22.86 m Cat6 Ethernet cable I’ve been lugging around the past few years.