Piracy and stealing are wrong. That’s a given. But also, I think it’s shitty when companies release limited edition items that can have a decisive impact on your gaming experience, but make them so scarce that the only way to get your hands on one of them is to buy it from an unscrupulous reseller.

In other words, it’s 2021. It sucks that I can’t just go to the Nintendo eShop and buy all the Hello Kitty characters and items I want for my Animal Crossing island. Fuck exclusives, especially exclusives tied to single retailers and physical goods (like these Amiibo trading cards) that resellers can now hawk on eBay for astronomical prices.

When faced with the option or paying eight times the cost of an $8 Amiibo pack or pirating the damn thing yourself, well, the choice is yours. I won’t judge you. Nor will I show you where to get the special .BIN files that contain said Sanrio Amiibo if you’re going the DIY route. However, once you’ve gotten your hands on those, making your own NFC tags that you can use to import the characters into your game is easy.

First, you’ll need something that can write to NFC tags. If your phone has an NFC chip, you’re good to go. Otherwise, you’ll have to grab some specialised hardware. I recommend going with the former, even if you have to ask around and borrow a phone from a friend. Don’t spend $50 on an NFC writer for a process you won’t be repeating that often.

From there, you’ll need an app. On Android, I used the free TagMo app. (I haven’t tried this on iOS, but I’ve seen people speak highly of the $5 AmiiBot. If you can find a free solution, more power to you.)

Next, you’ll need some NFC tags. I bought these from Amazon back when I played Animal Crossing: 11 stickers for $9. I didn’t really plan to do a ton of importing, and I figured that was plenty to get my meager island outfitted with the villagers I wanted. You can probably find cheaper tags in larger quantities; read the reviews to make sure people using them haven’t had any issues. These tags in particular have a 4.8 out of 5 with 3,086 reviews (as of this writing), so they felt pretty legit.

While they shipped, I dropped the all the Amiibo .BIN files onto my Android device. Anywhere in the file system is fine — I put mine in my Downloads folder so I’d remember to delete them later when I was all done creating NFC tags. 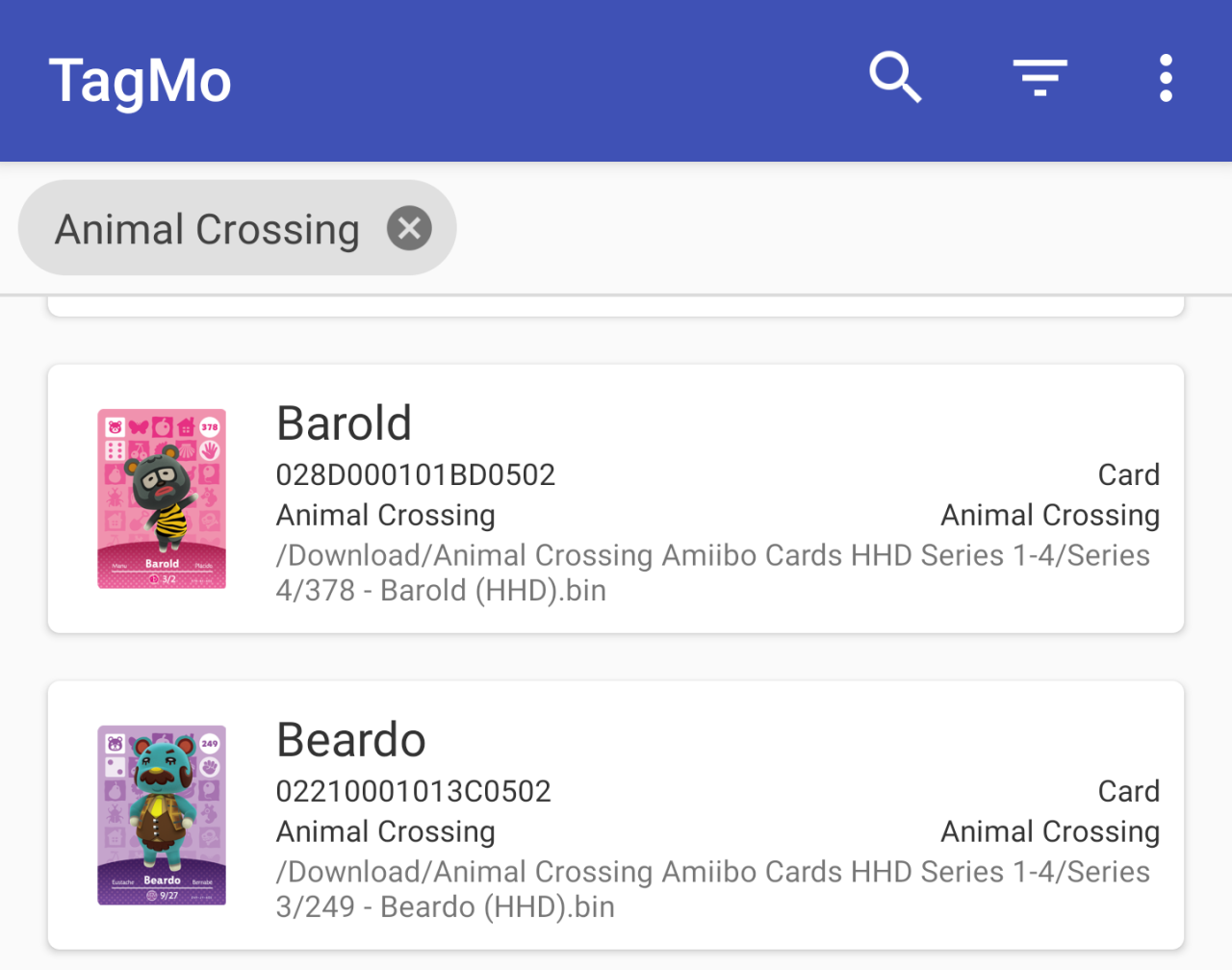 From there, creating your custom NFC Amiibo tags is easy. Launch your app and load the .BIN file for whatever Amiibo you want to create. 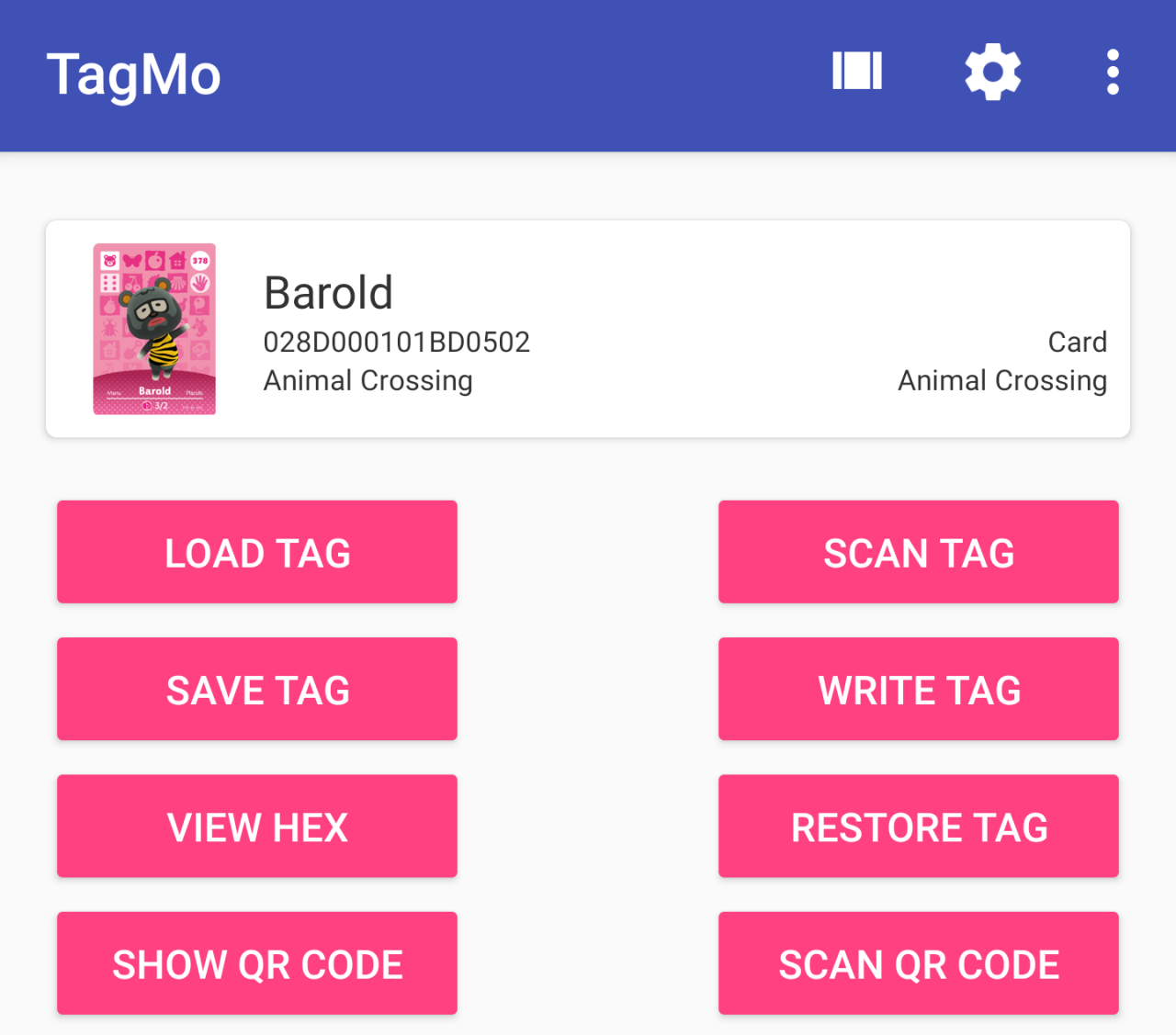 Writing the tag should be as easy as tapping a button and holding one of your blank NFC tags to your device. The process takes all of a second or so to finish, and you should be able to then hold said counterfeit tag over your Nintendo Switch’s NFC reader to import the character into your Animal Crossing game. May this satiate your lust for Sanrio while you wait for the physical cards to restock — thus restoring your Animal Crossing karma, should you end up purchasing them.