Apple Is Discontinuing the iMac Pro — Now What?

That’s right: Apple is done with its current versions of the iMac Pro, and if you want to get your hands on one — spoiler, you don’t, but more on that in a minute — you’ll be stuck shopping for limited configurations “while supplies last”.

In fact, there’s only one configuration available from Apple as of this writing — a $7,299 iMac Pro featuring:

The absolute last thing you’ll want to do is pick up an iMac Pro right now and suffer remorse later. What a waste of money that would be. The specs you’re staring at are pretty much identical to what you would have received had you purchased that very same iMac Pro when it debuted in late December of 2017, save for a 2019 update that allowed the desktops to support up to 256GB of memory. You’ll surely be able to find other iMac Pros, and potentially even cheaper iMac Pros, from third-party retailers. Avoid those too.

Use This Website to See What Software Runs on M1 Macs

Apple’s pivot away from Intel processors to using its own M1 chip in its Mac PCs and MacBooks means iOS apps can now run directly in macOS. Unfortunately, it also means some desktop apps developed for Intel hardware are now incompatible on the new M1 Macs.

The reasons why should be obvious to anyone who has been paying attention to Apple for the past six months: M1. Apple’s custom silicon is slowly making its way through Apple’s product lines, and I have no doubt that you’ll be able to buy an iMac, and eventually, an iMac Pro, with an M1 chip built-in — possibly even an M2 or M3, depending on how long it takes Apple to refresh the product line.

While I’m not super up-to-date on my workstation knowledge, a cursory look at the Geekbench benchmark charts puts Apple’s new chip far ahead of the four-year-old Intel Xeon W-2150B processors for single-core performance: 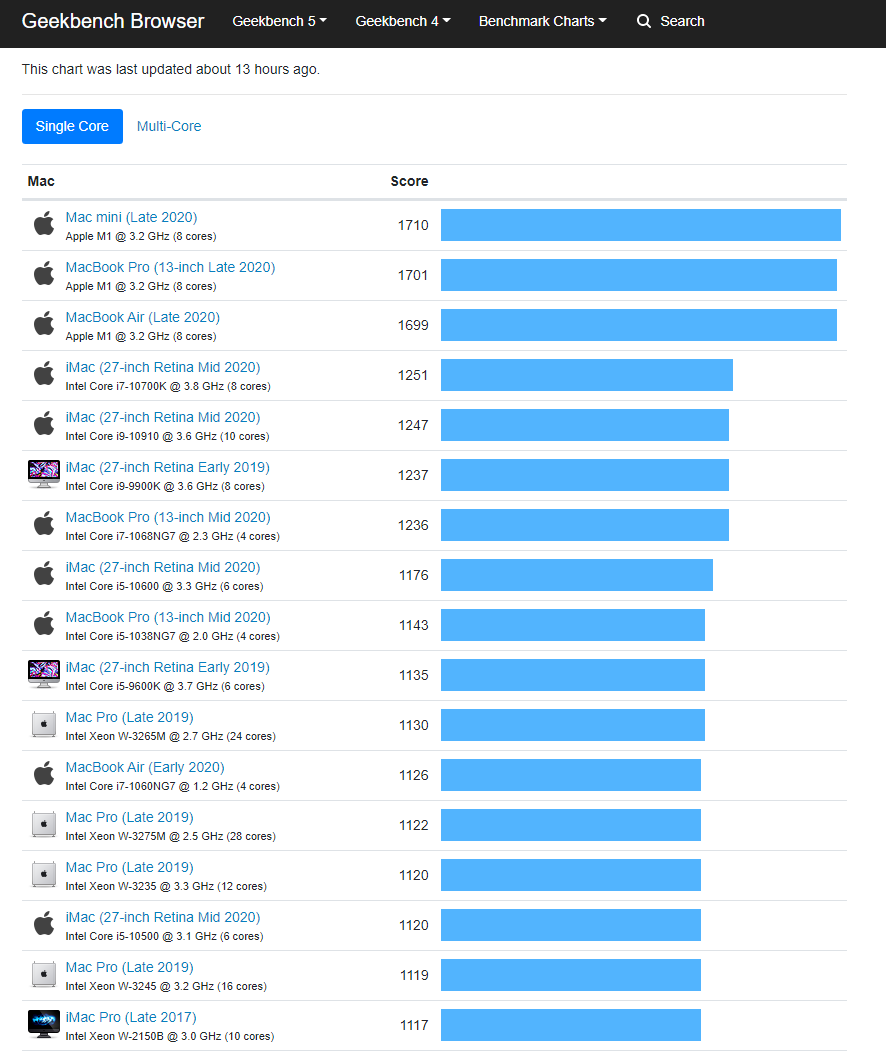 And, obviously, even an older 10-core Xeon W chip outperforms the M1 for multi-core performance: 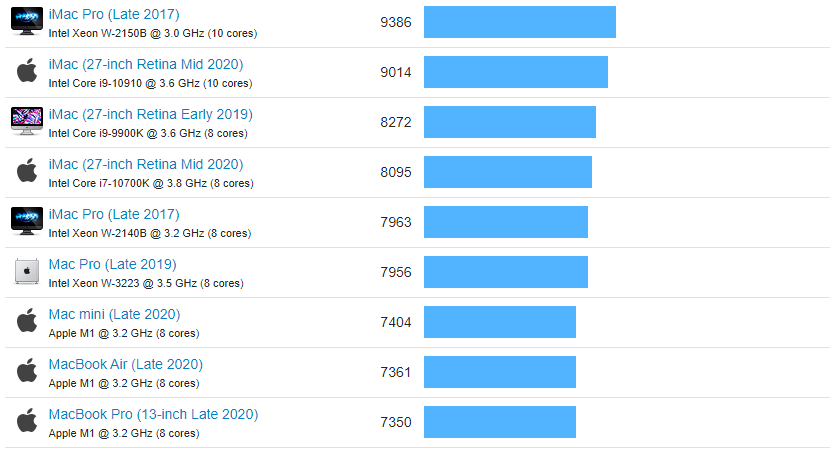 Here’s the thing, though. These charts are comparing the brand-new Mac Mini — a simpler all-in-one desktop setup — against a workstation desktop. It’s apples and oranges, and even then, Apple’s $900-1,000 system puts up some pretty solid performance numbers against a $7,299 iMac Pro. I wouldn’t use a Mac Mini to, say, render my latest 8K movie masterpiece, but it’s 20-35% of the performance of Apple’s iMac Pro (using Geekbench scores) for less than one-fifth of the price.

Do All Apple M1 Macs Perform the Same?

Apple worked overtime last week to convince the tech world to get excited about its latest chip innovations, making bold claims that its new machines are infinitely faster than the previous generation. But here’s something to consider: Are all of Apple’s new M1 chips created equal?

If you need a system that’s close to iMac Pro-calibre performance right now, your best bet is to simply opt for one of Apple’s regular iMacs. As you’ll see on the charts, the mid-2020 refresh of the 27-inch Retina iMac delivers comparable performance to an iMac Pro, for roughly half the price. Unless there’s something about that 256GB of memory you absolutely need for your working setup (versus the iMac’s 128GB maximum), or those two extra Thunderbolt ports are make-or-break for you, the iMac Pro should be more than adequate.

That all said, I wouldn’t buy any kind of iMac right now. With an Apple event rumoured for later this month, you can at least wait a few weeks to see if Apple shares any news about updated iMacs with M1 chips. I doubt you’ll see an iMac Pro announced, but I’m sure that one will be coming at some future point, too.

The performance boosts from Apple’s chips — if its current MacBooks and Mac Minis are any indication — are pretty substantial, and it would be a shame to just miss out because you couldn’t wait a month. If you can wait a few months (or quarters) to see how its M1 chips stack up in a more performance-oriented PC, even better.