As soon as I said, “I don’t see why anyone would want to eat okra,” the music seemed to stop, the crowd turned to stare, and I heard the crash of glasses hitting the floor. The nearest exit was not near at all, and I had made a huge mistake. Luckily, I was in New Orleans and was subsequently schooled by an auntie who was kind enough not to thwack me with the ladle in her hand.

Growing up in Jamaica, I had only had okra two ways — boiled or steamed. Both cooking methods yielded slimy innards deceptively encased by a delicate, finger-shaped pod, and for decades it featured heavily on my “why-would-you-ever-eat-that?” list, along with eggplant, instant pudding, mousse, and risotto. As I matured, I embraced and came to appreciate all of those foods, but okra was the last to win me over. (I’ll never eat salmon mousse, however. It’s not 1987 and it’s a crime against nature to take delicious fish and do this to it.)

I learned to appreciate okra during that fateful trip to New Orleans in 2011. My friends and I had been drinking all day and needed something substantial. We ended up at another bar, and this one served food, but there was only one item on the menu — gumbo. I wondered what sort of karmic crimes I committed to end up there, while everyone else was raving about the gumbo. I didn’t understand why there were as many white styrofoam bowls as there were empty shot glasses until I got a history lesson from the auntie whose gumbo recipe had been in her family for generations. 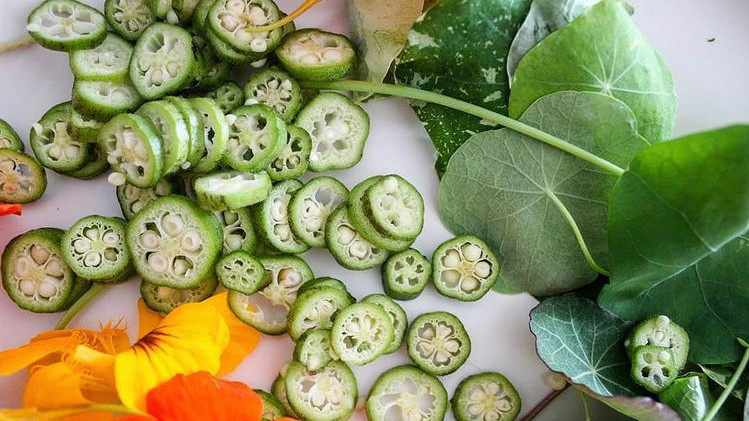 Okra was first cultivated in Ethiopia in the 12th century BC. It belongs to the same family as hibiscus and cotton and was introduced to the Caribbean and Southern United States by slaves from West Africa.

As told by Michael Twitty, a culinary historian and author of The Cooking Gene: A Journey Through African American Culinary History in the Old South:

In mainland North America, okra was one of the ultimate symbols of the establishment of the enslaved community as a culinary outpost of West Africa.

And, in addition to being a well-known food that helps manage the effects of diabetes, a 2014 medical study revealed that okra seeds have a phytochemical that reduces stress. It also contains a lot of mucilage, which is what can give the pod that “slimy” texture.

Avoid Slimy Okra By Boiling Before You Chop

I enjoy a side of fried okra as much as the next Mississippian but, thanks to a delightful substance called “mucilage,” prepping the pod can be slimy work. The solution is simple: cook the pods a bit before you chop them.

There is both red and green okra, and both varieties grow all year round in tropical climates — from seed to harvest takes around 60 days. It is widely used across Africa, the Caribbean, the Southern United States, Greece, Turkey, India, and South America. You may ask, “With so many regional influences, there has to be more to cooking okra than by boiling and steaming?” Lucky for those of us with textural issues, there are.

Marianna’s Kitchen proprietor Marianna Farag loves okra and its many preparations. Being born in Greece to Egyptian and Syrian parents and possessing a French passport has given her a leg up on most okra aficionados. Farag likes “frying them into an ‘octopus,’” which she does by quartering each pod vertically, without fully separating each segment, dipping them in a batter, and then deep-frying them. She also eats them raw. “The tender ones I dip in hummus, and it’s better than celery sticks,” she says.

In the U.S. and Canada, okra is underused and widely underrated, except for in the American South, where you can find deliciously crispy deep-fried okra. In Barbados, okra’s gooey texture is celebrated in a polenta dish called cou cou, where the pod gives the dish a stretchiness that’s similar melted mozzarella. Serve it with fried flying fish, and you have the national dish of Barbados. In Jamaica, it is used to make smoothies, which has to be the most creative use for the pod.

Harnessing okra’s mucilage is the key to a successful okra dish. Whether you’re trying to reduce the sliminess or use it to the dish’s advantage, knowing how to properly prep and cook it will allow more home cooks to experience the vegetable’s uniquely grassy flavour. 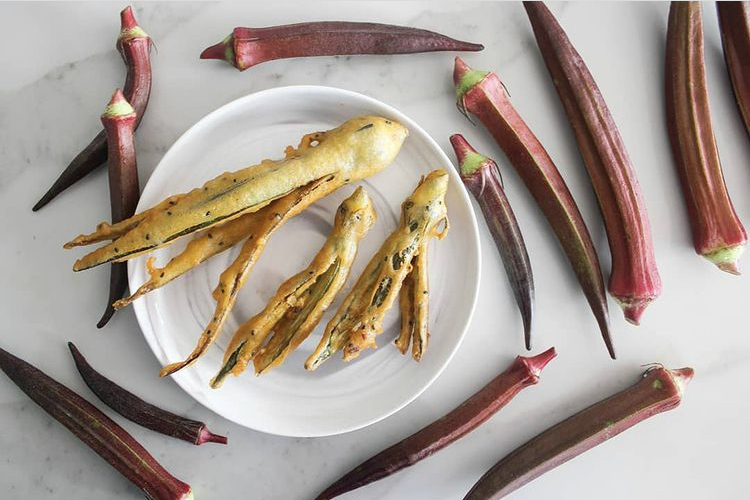 How to buy and store okra

Look for young firm pods that snap like a green bean. The older okra gets, the more fibrous it becomes, making it almost inedible. Store them in a basket or paper bag in a cool, dry area. If you won’t be using what you’ve purchased within a couple days, place the okra in a paper bag or shallow bowl in the refrigerator.

Don’t wash until you’re ready to cook, as the water will permeate the tender skin making the cooked vegetable — you guessed it — slimier.

How to cook okra

How you cut the pod can also affect the final texture of your dish. Slicing the pod into discs or smaller pieces increases its surface area, making it easier for okra’s gooey texture to develop, which isn’t always a bad thing, as it functions as an excellent thickening agent for stews, soups, and polenta, especially if you’re into Bajan cuisine.

In a bowl, combine the cornmeal with enough water (approximately one cup) until it takes on the consistency of wet sand, and set aside.

Wash the okra, then cut off the tops and bottoms and discard them. Slice into discs and place the slices in a heavy-bottom stock pan over high heat with the remaining water, salt, and white pepper. Bring to a boil, then reduce to medium heat and cook until the okra is soft (around five minutes). Remove the okra from the water with a slotted spoon or spider, and set aside.

Boil the remaining water for five to eight minutes to reduce the liquid — you want 1 1/4 cup of reduced okra water left in the pot. Slowly whisk the soaked cornmeal into the boiling water, ensuring that no lumps form. Once the cornmeal has been added, switch to a wooden spoon, stirring every two to three minutes.

After 15 minutes of cooking, test the cornmeal. The grains should dissolve on the tongue or turn into a fine paste when rubbed between fingers. Add the cooked okra and stir for another two minutes. Take the pot off the stove, and stir in the butter. Enjoy as an accompaniment to stews or gravy-heavy dishes.

Rinse the okra and pat dry. Cut off the tops and the tips of the bottoms, discard, and halve the pods vertically. In a separate bowl, combine the rest of the ingredients, then add the halved pods and toss to coat.

Place the prepared okra on a parchment-lined baking sheet and bake at 230 degrees Celsius. Don’t over stir during baking or the okra will turn slimy, which is not what we’re aiming for here. Flip the okra halves or stir just once during baking; the 10-minute mark is a perfect time. After 18 minutes of roasting, check the texture. It should be somewhat charred with crispy bits. I’ve cooked mine for as long a 25 minutes; the subtle bitter notes work well with the natural grassiness of the okra and sharpness of the lemon.

Blend all the ingredients together until the oats and okra are fully incorporated. Drink immediately. The longer it sits, the more gelatinous it gets.