Give Your Grilled Cheese Sandwich a Parmesan Crust

I am a bit of a grilled cheese purist. I like mine on white bread, slathered with butter (not mayo), and filled with gooey, processed cheese. A good havarti is also acceptable if the mood dictates a touch of luxury, but harder, acidic cheeses like cheddar or parm are not allowed — unless you’re putting them on the outside of the sandwich.

The qualities that make parmesan, cheddar, and other hard cheeses like them so poorly suited for the inside of a grilled cheese are what make them so well suited for the outside. Because of their low-ish pH, these cheeses tend to grease out and congeal, rather than melt into a soft, creamy blob (which is what you want in between your bread). But when placed on the outside of a sandwich, the fat inside the cheese renders, frying the proteins and leaving behind a lacy network of crispy, salty, fried cheese. It’s frico, except it’s stuck to bread.

Basically, if you can make a cheese crisp with it, you can use it to create a crunchy crust on the outside of your sandwich. Cheddar works, shredded parmesan works, even the powdered shaker parm gets the job done. Throughout the course of my many serious sandwich experiments, I found that the powdered parm does the best job of sticking to the bread and releasing from the pan, but the shredded stuff has a better flavour. (Real Parmigiano-Reggiano would have the best flavour, obviously, but it’s the priciest option.) 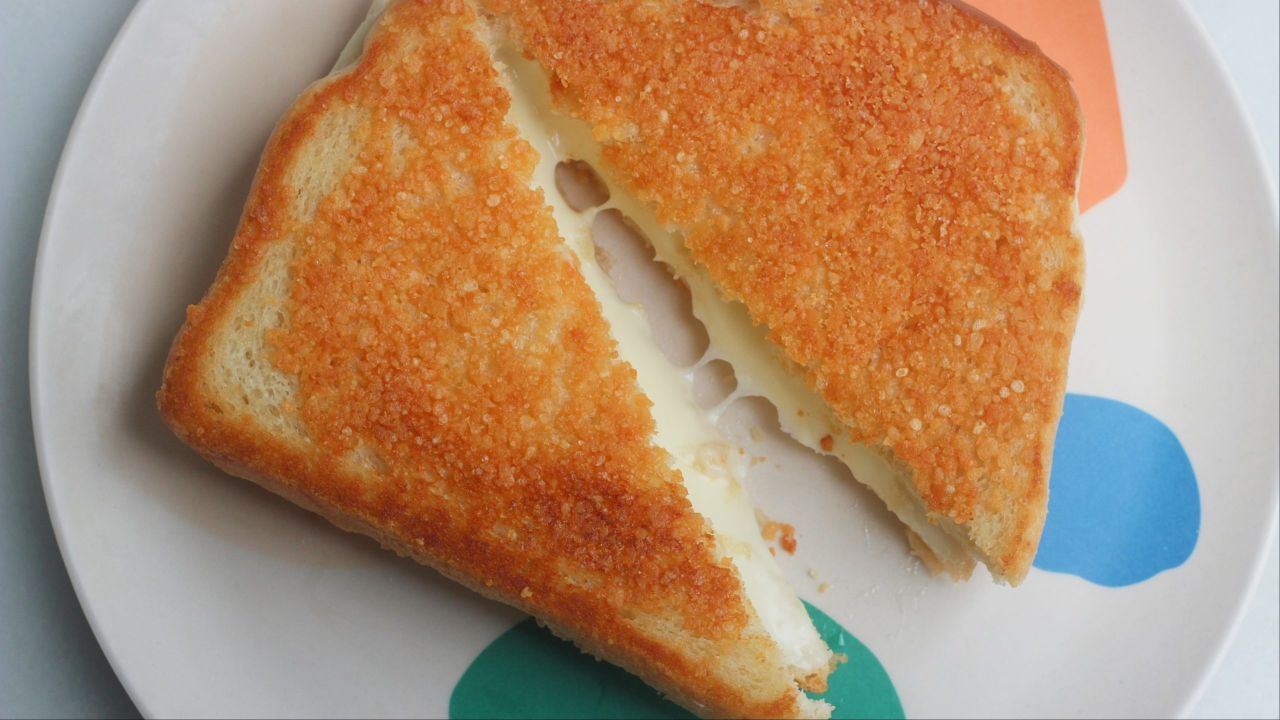 That golden crust is made with the powdered stuff, baby. (Photo: Claire Lower)

Adding an external layer of cheese to your cheese sandwich is easy: Spread some soft butter on the outside of the bread (or dip it in melted butter), then sprinkle half a tablespoon or so of your desired cheese on the buttered bread, pressing it down gently to help it stick. Place on a piece of bread, cheese side down, in a nonstick pan, layer your softer “filling” cheese inside, then cook over medium heat until the outside cheese forms a golden crust and the inside cheese melts completely. If you’re worried about it burning, use a plastic spatula or take out utensil to carefully lift up a corner and take a peek. Slide on to a plate, cut it in half diagonally, and devour.